If you’ve finished our “GMA” Book Club pick this month and are craving something else to read, look no further than our new digital series, “GMA” Buzz Picks. Each week, we’ll feature a new book that we’re also reading this month to give our audience even more literary adventures. Get started with or latest pick below!

If you’re still looking for that perfect Mother’s Day gift for the mom in your life who loves reading, consider “Early Morning Riser” by Katherine Heiny, this week’s “GMA” Buzz Pick.

Heiny’s new book is a funny and bighearted novel that centers around love, disaster and an unconventional family. 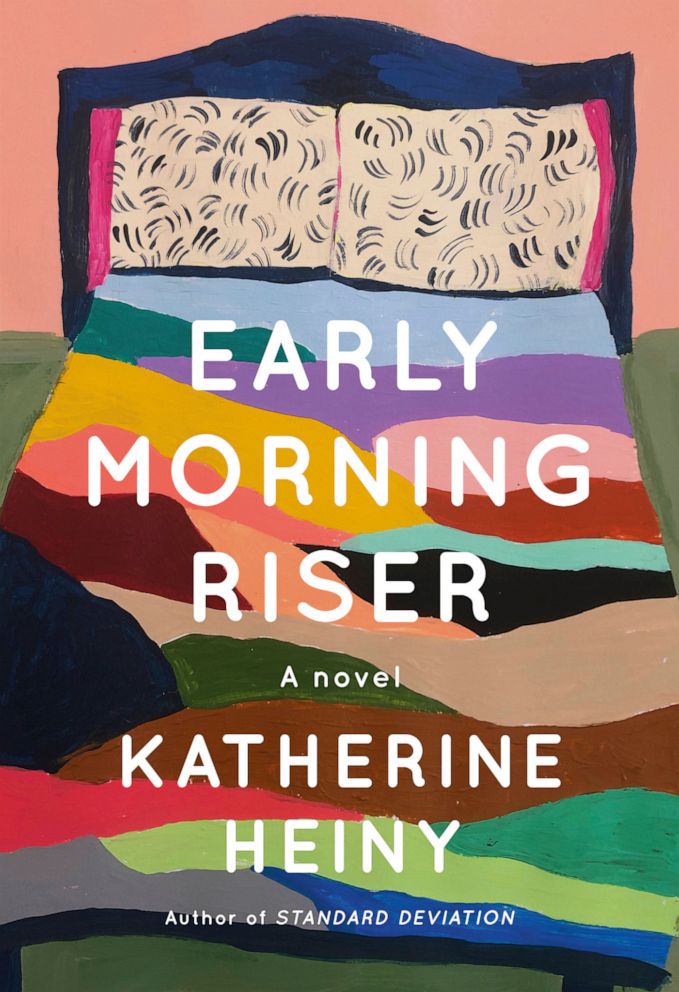 The story follows Jane, a second grade teacher who falls in love with Duncan, a charming and handsome man, who has been with nearly every woman in Boyne City, Michigan. Unfortunately for Jane, Duncan’s past girlfriends are unavoidable, and she sees them everywhere -- at restaurants, at the grocery store and even three towns away.

While she’s able to accept his past, Jane wishes she didn’t have to share him so widely -- especially with Duncan’s ex-wife, Aggie, who still has Duncan mow her lawn, and Jimmy, who comes and goes from his apartment at the most inopportune times.

But when a car crash changes the notions she had of love, marriage and plans with Duncan, Jane’s life becomes permanently intertwined with his, Aggie’s and Jimmy’s, and she’s forced to make sense of it all and discover what really matters most.

MORE: 30 May books to add to the stack

“It’s about the bargains we all make in the name of love,” Heiny told “Good Morning America.” “I hope you enjoy it this Mother’s Day.”

Read an excerpt below! 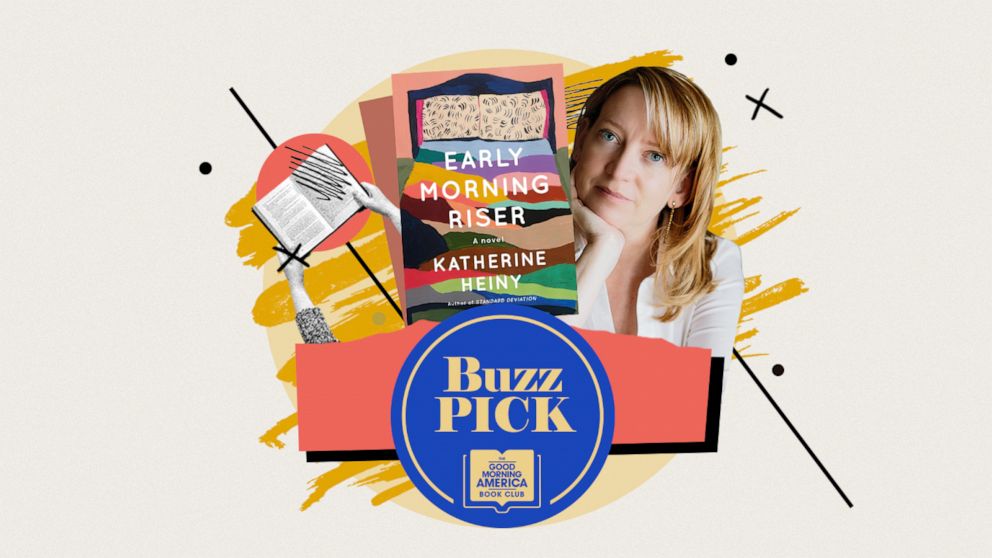 Jane met Duncan less than a month after she moved to Boyne City. She had locked herself out of her house and had to ask a neighbor to call a locksmith. She was sitting on her front steps in the early twilight wearing her pajamas -- she taught second grade and it was Pajama Day -- when Duncan drove up in a rust-spotted white van.

“Whoa,” he said when he saw her. “Exactly how long have you been waiting?”

He was in his early forties, with slightly shaggy auburn hair and a full moustache. His eyes were brown with amber flecks, and his features were so symmetrical that his face looked as though it could have been cut from a piece of paper folded in half. He was of medium height, medium build, wearing nothing more distinctive than jeans and a denim shirt, yet he seemed to stand out vividly, like the subject of a photo with a blurred background. To Jane he looked like the Brawny paper towel man, and no less handsome.

“Only about twenty minutes,” she said. She stood up and ges­tured at her front door. “I’m afraid you may have to drill the lock out.”

“Oh, I doubt that,” Duncan said. “I bet we can find another way in. Folks always think their houses are totally safe because they have a couple locks on the front door, and then they call me and it turns out they’ve been sleeping with a bedroom window open for half a year. Let’s take a walk around.”

They circled the house slowly. It was a pretty little one-story house, white with black shutters. Duncan kept stopping to look in the flower beds. “It’s also possible the previous owners left a key in a false rock or some such.”

At the back of the house, Duncan pointed to the bathroom win­dow. “Here’s what I’m talking about. I could pop the screen off there and climb right in if the window’s not locked.”

He slid the end of a screwdriver under the edge of the screen, and it popped loose with alarming ease. Duncan caught it with one hand. “Not much crime around here,” he said to Jane, “but last year Shirlene Talbot woke up to find a man making himself a ham sand­wich in her kitchen. He was pretty harmless—turned out he was the Masseys’ houseguest and was too drunk to remember which house they lived in. Still, I’d hate for that to happen to you.”

He dragged Jane’s garbage can over, climbed on top of it, and pushed the window open. He ducked inside, and a minute later, he opened the front door and called out to her.

Jane thanked him and asked him to stay for supper. She had never spontaneously invited a man to stay for supper before but she was grateful he hadn’t charged her anything. Also, she hadn’t had a real conversation with a man since she’d moved here, unless you counted the elderly man at Glen’s Market who had asked her to help him find his car.

She was twenty-six years old, tall and slender, with dark blond hair that looked good in a ponytail, and she didn’t need much makeup. That last part was fortunate because she rarely wore any. Her eyebrows and eyelashes were naturally dark despite the light color of her hair, and her pale blue eyes were almond-shaped, with slightly hooded lids that made eyeshadow pointless and hard to apply. (This had baffled Jane in her teen years when she followed step-by-step eyeshadow tutorials in magazines—wait, where was the crease of her eyelid? Why did she look exactly the same afterward?) She had a straight nose and a generous mouth. She was very pretty when she remembered to sit up straight, and pretty enough when she slouched.

During supper—Jane made an omelet and a salad—Duncan told her that he was really a woodworker and specialized in custom-made tables and chairs, but since someone wanted one of those only every once in a while, he also did antique furniture restoration and lock­smithing, and that he’d grown up in a small town in the Upper Pen­insula, and that he used to be married to a real estate agent named Aggie who could not tell the difference between a smallmouth and a largemouth bass. (Jane wasn’t sure if that was just some descriptive detail about Aggie or Duncan’s reason for divorcing her.)

“Where is Aggie now?” she asked.

“Where?” Duncan looked puzzled “This time of night, she’s probably home over on Alice Street, I guess.”

“Oh,” Jane said. “I didn’t realize she lived around here.”

Jane folded her napkin into smaller rectangles. “You must be very close.”

“I don’t know about close.” Duncan took a bite of his omelet. “We’re friendly enough, I guess, seeing as she up and left me for Gary Polnichik at State Farm, and they’ve been married almost ten years now.”

Duncan talked a lot. He told Jane that she should buy eggs from the farmers’ market, and that she should never order the clam chow­der at Robert’s Restaurant, and that the dentist had a drinking problem but morning appointments were generally okay, and that Bradley Reed up on the corner had a tendency to watch folks with his binoculars if they left their window shades up, and that the olive burger at the Boyne River Inn couldn’t be beat, and later he said, “I’m the luckiest man in Boyne City,” as he pulled Jane’s pajama pants off while she lay back on her sofa.

“But Boyne City is only about two hundred people!” Jane pro­tested.

“Still, you’re supposed to say in the universe,” she said.

“How about Northern Michigan?” Duncan ran his hands up the insides of her thighs. “Will that do? I’m the luckiest man in North­ern Michigan.”

That was on a Friday, and neither Jane nor Duncan left the house until Monday morning, when Jane had to go to school.