Throughout the pandemic, Jennifer Garner has been a breath of fresh air. From keeping it real for her family, friends and followers, to relatable bread baking videos, to using this time to promote charitable causes, the actress has not shied away from talking about everyday ups and downs.

Like so many Americans who are tagging each other in recipes to try at home, Garner told "Good Morning America" that she has found cooking to be a great way to stay connected with her loved ones.

"Cooking connects me to my family because my mom was such a steady, solid, really great cook," Garner said. "Whenever I smell a roast chicken or fresh bread baking or my neighbor Marge's gingersnaps in the oven, it connects me to my childhood. And I feel like I'm passing that on, and that comfort and coziness, as much as I can to my kids, as well as an expectation that they will grow up and they know what healthy food is."

The mother of three said her kids -- Violet, Seraphina and Samuel -- "cook a lot," and she believes when you're in control of each ingredient, it's "A-OK to eat what you want if your mom is making it, as far as I'm concerned." Adding one caveat: "As long as you're not going bananas."

"My 8-year-old son can whip up pancakes, he can make all different kinds of cookies," Garner said. "They're all really helpful with breads and with dinners, they're good in the kitchen." 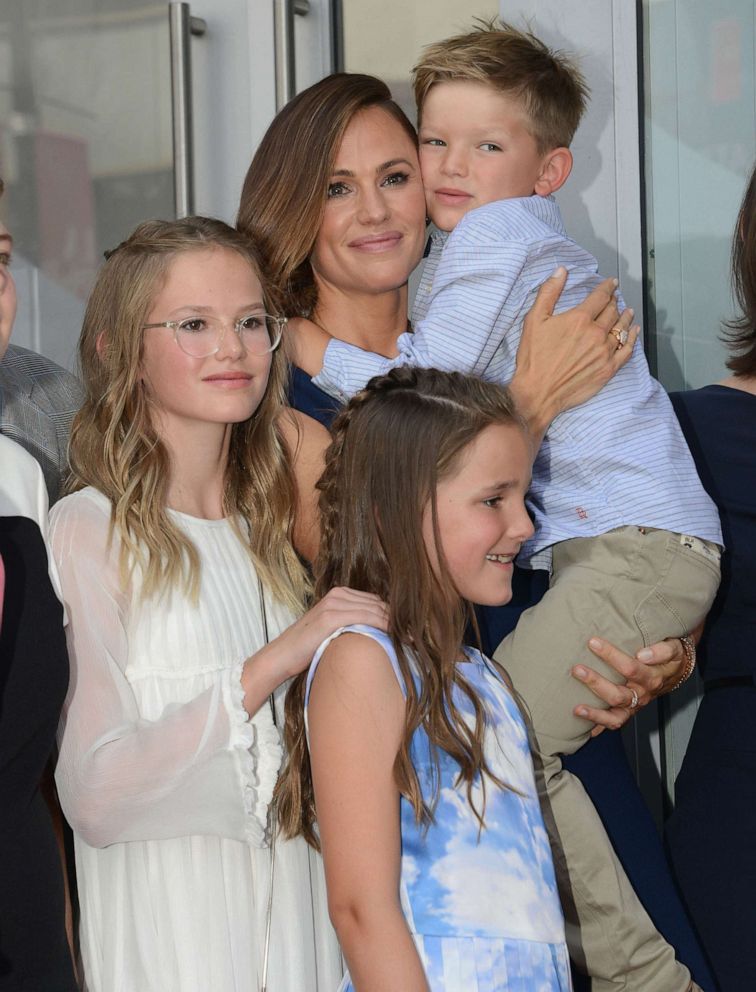 Albert L. Ortega/Getty Images, FILE
In this Aug. 20, 2018, file photo, Jennifer Garner posez with her children during the ceremony honoring Jennifer Garner with a star on the Hollywood Walk Of Fame in Hollywood, Calif.

Her favorite tool in her kitchen has reinvigorated her love of a workhorse pan that she said she now uses for everything.

"This little piece of mesh that's a scrubber for a cast iron skillet. I swear it changed my life 'cause now I use my cast iron skillet for everything," she said. "I always was just so confused about what a disaster it was trying to clean, and do you use soap or don't. Now, I really just scrub the bottom of it out, maybe oil it a little but and I keep going." 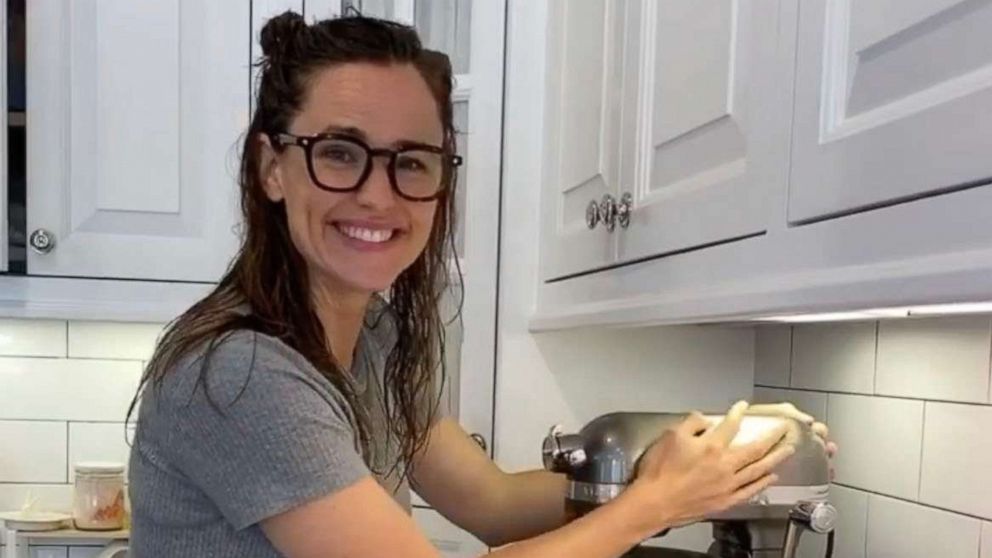 Garner has even been whipping up meals virtually with longtime friends such as the Barefoot Contessa herself, Ina Garten, who joined her on her lighthearted Instagram series dubbed "Pretend Cooking Show" that's racked up more than 2.2 million views.

"Pretty much it's just, 'Hey, we have a couple hours, what do I want to make for lunch or bake for the kids?' and we go ahead and just shoot it," Garner explained. "We don't think ahead and plan it, it's more random -- other than like, 'Hey Ina, do you want to do this show with me?'"

And good news for fans of Garner's popular IG videos, she said: "We're gonna do a holiday version, of course."

"Cooking together over a screen is something that we're gonna be doing. I love cooking with my family, my sisters, and mom and dad -- I have to say my dad is not a cook," she said with a laugh. "I could really see us just setting up a screen somewhere and having it on while we cook together for Thanksgiving."

The actress, 48, who has been a spokesperson for Capital One since 2014, said that in these chaotic times during the pandemic, "we're all having to be flexible in the way we go through the world and think about travel or eating and what our normal lives look like." 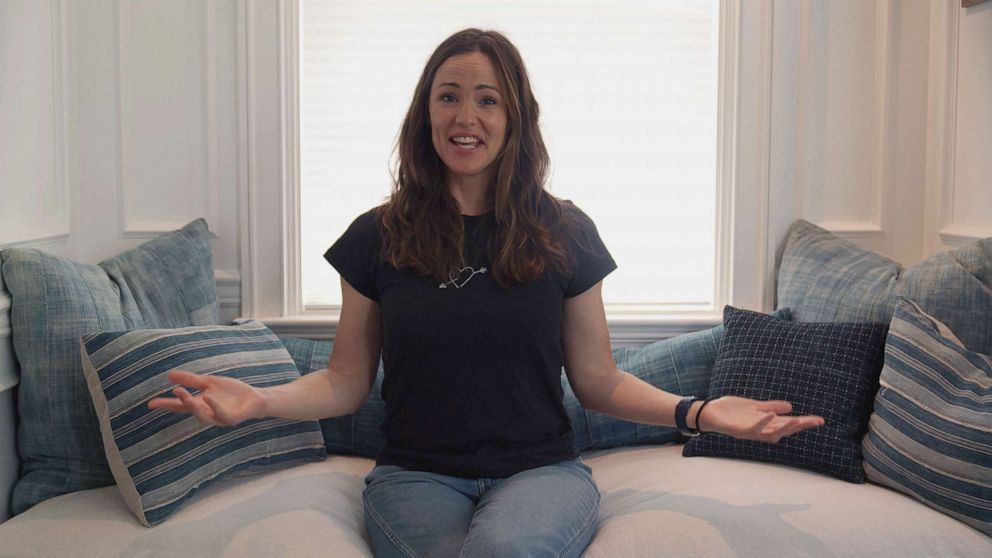 NBC/NBCU Photo Bank via Getty Images
In this screen grab taken from video, Jennifer Garner appears on The Red Nose Day Special, which aired on NBC, May 21, 2020.

Which is one reason she said the brand's flexibility on miles is especially important now until people feel safe to book a trip or travel again.

"Your miles aren't going to expire, so you can dream of going to Bali and keep making purchases knowing you'll have double miles to use later," she said. She adds that while people continue to stay home, their points can be used towards "your food delivery, on your streaming services and things like that, so go ahead and be cozy, it's all good."

The Once Upon a Farm co-founder and advocate for Save the Children has been very open about her mom Patricia Garner's upbringing in a poor family on a tiny farm in Oklahoma, and is getting back to her roots to help raise awareness and feed hungry children amid the pandemic.

"Since the pandemic started, one of the things we had to do to be flexible is start making sure that kids were being fed. Because we serve kids in the most out-in-the-middle-of-nowhere rural America, we're really working with school districts to find out what they need," she explained. Whether it's funding for bus drivers to deliver food or getting bridge food to kids so they can make it to the next day without missing a meal, Garner's company and the nonprofit organization are working in tandem to provide relief.

"We dont talk about poverty in America enough -- hunger in kids tripled in one month," Garner said. "It's crazy to think that those little kids could pull themselves up by their bootstraps and learn with a hungry belly -- we have to help our most vulnerable citizens out."