"Jeopardy!" host Alex Trebek, who died Sunday following a battle with pancreatic cancer, was honored during the quiz show Monday.

Executive producer Mike Richards delivered an emotional message at the top of the show on behalf of the "Jeopardy!" family, memorializing Trebek and thanking him for all that he did.

Trebek began hosting "Jeopardy!" in 1984, and after announcing his pancreatic cancer diagnosis in 2019, he continued to be at the helm of the quiz show until last month. His final day in the studio was Oct. 29, and episodes featuring Trebek will continue to air until Dec. 25.

"Over the weekend, we lost our beloved host Alex Trebek. This is an enormous loss for our staff and crew, for his family and for his millions of fans. He loved this show and everything it stood for," Richards said. "He will forever be an inspiration for his constant desire to learn, his kindness and for his love of his family. We will air his final 35 episodes as they were shot. That's what he wanted. On behalf of everyone here at 'Jeopardy!,' thank you for everything Alex."

Richards then began the show the way Trebek always did: "This is 'Jeopardy!'" he said.

Today’s show features a special message on behalf of everyone in the Jeopardy! family. 💜

Alex taped shows through December 25th, 2020. They will air as he intended, in his honor.

Surrounded by friends and family, Trebek, 80, died at home in Los Angeles on Sunday, following a 20-month battle with stage 4 pancreatic cancer.

Trebek spent the day before he passed away with his wife on a swing he had recently rebuilt in his backyard, according to Richards, who added that Trebek was coherent and was not in pain.

Trebek wrote about the swing in his memoir, writing, "I'll be perfectly content if that's how my story ends. Sitting on the swing. With the woman I love. My soulmate. And our two wonderful children nearby."

What to know about pancreatic cancer

2:20
After Alex Trebek died of the deadly cancer, ABC News' Dr. Jennifer Ashton breaks down why it's so deadly, the warning signs to look out for and how to reduce one's risk.

In the wake of his death, the Pancreatic Cancer Action Network (PanCAN), a nonprofit organization focused on the disease, reported that it has seen a 450% increase in traffic to its website and more than $55,000 in donations. Last year, Trebek appeared in a public service announcement for the group.

"Alex Trebek, through his bravery and willingness to share his journey about his pancreatic cancer, has been a true ambassador and hero, fighting the disease and blazing a better path for many as a result," PanCAN said in a statement Monday.

Pancreatic cancer is on track by the year 2025 to be the second leading cause of cancer deaths in the U.S., behind only lung cancer, according to Dr. Jennifer Ashton, ABC News chief medical correspondent and a board-certified OBGYN.

More than 57,000 Americans are expected to be diagnosed with pancreatic cancer in 2020, according to PanCAN.

For people diagnosed with pancreatic cancer, the survival rate beyond five years is only 10%, according to the National Institutes of Health's (NIH) National Cancer Institute.

"Part of the reason it tends to be so deadly has to do with anatomy," said Ashton. "If you look at where the pancreas is located, it sits high up in the abdominal cavity. You can’t palpate it or feel it on a physical exam."

"By the time it’s producing symptoms, like yellowness of the skin and eyes or weight loss, it’s generally metastasized or spread to an advanced stage," she said. 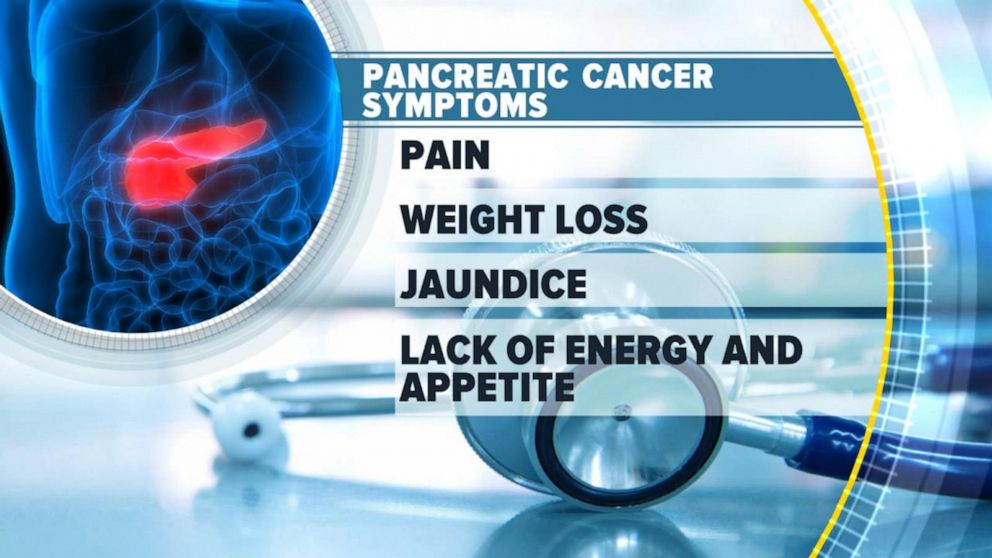 ABCNews.com
VIDEO: What to know about pancreatic cancer

Making pancreatic cancer even more difficult to diagnose is that there is no screening test for it, according to Ashton.

Treatment for pancreatic cancer can include everything from surgery to chemotherapy and radiation therapy, as well as new, so-called targeted therapies, according to Ashton.

"In oncology there is always reason for optimism and hope and with pancreatic cancer, the same thing applies," she said.

The exact causes of pancreatic cancer are not well understood, but people can follow a healthy lifestyle to help reduce the risk, from eating well and limiting red meat, heavy alcohol and sugar use to exercising regularly and not smoking, according to Ashton.