Kanye West was so concerned about an interview with TMZ in which he suggested slavery was a choice that he asked family members if his wife, Kim Kardashian West, was thinking of leaving him.

"There was a moment where I felt like after TMZ, maybe a week after that, I felt like the energy levels were low, and I called different family members and was asking, you know, ‘Was Kim thinking about leaving me after TMZ?’" he told The New York Times in a new interview. "So that was a real conversation."

West even wrote a song about his fears -- "Wouldn’t Leave" on his new album "Ye," released in June.

Last month, during a freewheeling interview on TMZ, the 40-year-old rapper and fashion designer sounded off on everything from Donald Trump to his 2016 breakdown to his feud with Jay-Z. But it was his comments about slavery in which he said, "When you hear about slavery for 400 years ... for 400 years? That sounds like a choice," that drew immediate condemnation.

In the Times interview, West tried to clarify his remarks.

"I said the idea of sitting in something for 400 years sounds -- sounds -- like a choice to me, I never said it’s a choice. I never said slavery itself -- like being shackled in chains -- was a choice," he said. "That’s why I went from slave to 400 years to mental prison to this and that. If you look at the clip you see the way my mind works."

Asked how he would reframe it if he had another chance, West responded: "I feel stupid to have to say out loud that I know that being put on the boat was -- but also I’m not backing down, bro. What I will do is I’ll take responsibility for the fact that I allowed my voice to be used back to back in ways that were not protective of it when my voice means too much."

He went on to explain, "I believe that the black community wants to protect my voice. By me saying slave in any way at TMZ left my voice unprotected. So it’s not a matter of the facts of if I said that exact line or not, it’s the fact that I put myself in a position to be unprotected by my tribe." 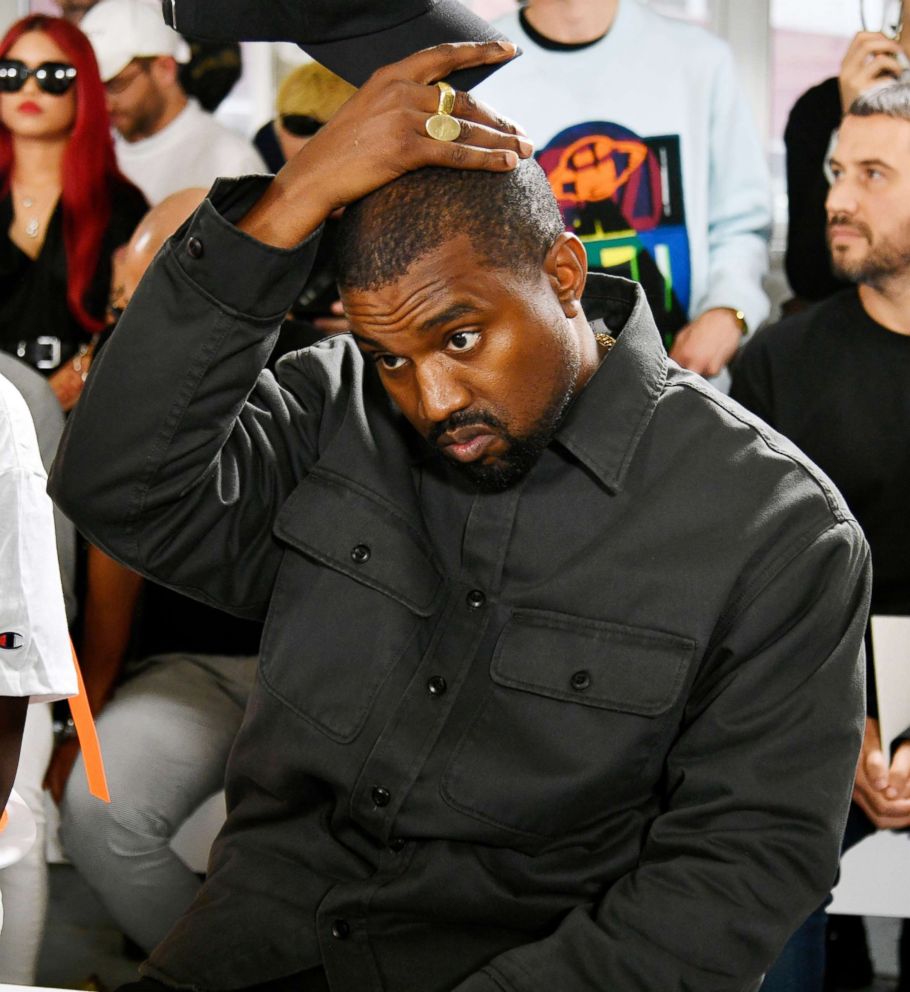 Dominique Maitre/WWD/REX/Shutterstock
Kanye West in the front row of a show at Men's Fashion Week in Paris, June 24, 2018.

West also opened up about his mental health during the interview.

He shared that his wife summoned motivational speaker Tony Robbins to stage an intervention after West was released from the hospital following his November 2016 breakdown.

Diagnosed with bipolar disorder, he said he's "learning how to not be on meds," telling the Times, "I took one pill in the last seven days."

He also revealed that he has thought about killing himself "all the time."

"It’s always a option and [expletive]. Like Louis C.K. said: I flip through the manual. I weigh all the options," he said.

ABC News reached out to a rep for West for comment but did not receive an immediate response.