"More Than You'll Ever Know" by Katie Gutierrez is our "GMA" Book Club pick for June.

Gutierrez's debut novel is an evocative drama about a woman caught leading a double life after one husband murders the other, and the true-crime writer who becomes obsessed with telling her story.

The story follows Dolores "Lore" Rivera, who leads a double life. She marries Andres Russo in Mexico City, even though she is already married to Fabian Rivera in Laredo, Texas, with whom she shares twin sons. Through her career as an international banker, she splits her time between two countries and two families -- until the truth is revealed and one husband is arrested for murdering the other. 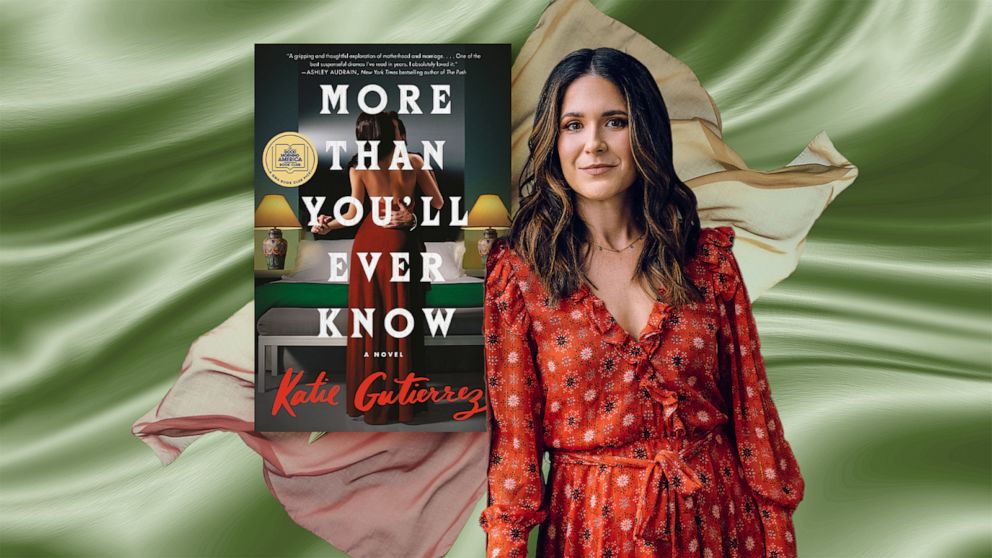 William Morrow and Company, Meet the Bryants Photography
“More Than You’ll Ever know” by Katie Gutierrez.

Fast forward more than 30 years later, a struggling true-crime writer named Cassie Bowman encounters an article detailing the story and is immediately enticed by what is not explored: Why would a woman -- a mother -- risk everything for a secret double marriage?

"It's about marriage and motherhood, female desire and ambition, and our cultural obsession with true crime," Gutierrez told "GMA." "It's also about how little decisions become big ones and the secrets we keep from those we love. I hope you'll enjoy it."

'More Than You'll Ever Know' by Katie Gutierrez

Gutierrez's debut novel is an evocative drama about a woman caught leading a double life after one husband murders the other, and the true-crime writer who becomes obsessed with telling her story.

Now, in the atrium of the Gran Hotel in the Centro Histórico, Lore gazes up at the golden dome of the stained-glass ceiling. From the center, three round peacock-blue skylights stare back like the eyes of God. The white marble floors are reflective as a lake, and the caged elevator carries people upward in a slow, dreamlike swoon. Joy slices like a knife between her ribs.

Along the border, things that are concrete, sharply defined, elsewhere are fluid. Banking is business, yes, but business is personal, always. You open accounts with relationships, not dollars, which is not something the big U.S. banks understand. Those national chains have no interest in operating in a small Texas-Mexico border town, and those who tried have not lasted. All they see in Laredo is a bunch of Mexican country bumpkins. They don't understand the power of the border, the flow of commerce like a river between countries. They don't understand the culture. How it's not enough to know your customers' names; you also need to know the state of their father's emphysema and that their daughter is salutatorian at Martin and that if you give them a camo baseball cap with the bank's embroidered logo, they will wear it so often their wife will forbid it in the bedroom. Now the big banks are floundering, with their risky investments and scattershot loans, while Lore's community bank is holding steady. They've had to be responsible with their funding, careful to whom they lend, but when customers struggle to make payments, the bank is able to work with them. And in better times, the customer remembers. This is how the table expands: to a game of Little League, the board of the Rotary Club, an extravagant wedding in Mexico City.

The wedding is tonight, the daughter of Fernando Santos, Mexican entrepreneur and owner of a slew of maquiladoras along the border, including two in Nuevo Laredo. Mr. Santos has been a customer of the bank for ten years, long enough to invite Lore and her colleague Oscar. But Oscar's first child will be born any day now, and even though Fabian scoffed at the invitation—how could he take time off right now?—Lore had accepted. It's good for business, she told him.

And she RSVP'd for one.

The whole hotel has been reserved for the wedding, and in the sun-shot atrium, employees scurry around a hundred round tables, calling out to each other as they arrange porcelain plates and gleaming silverware. Behind the bride and groom's table, florists make tender-fingered adjustments to an entire wall of roses and lilies. Lore watches from inside the caged elevator, touching one of the brass flowers. She wishes Fabian could see the intricate iron scrollwork.

In her room, Lore sets her bag down gently on the plush carpet. She sighs, running her hands over the king-size bed's ornate wooden headboard and the filmy white curtains; the dainty damask bench and dusky blue velvet chair. How strange to be somewhere so luxurious, so opulent, when Mexico is burning and Laredo along with it. They'd felt so lucky back in '80, '81, when they were mostly insulated from the national recession by the 1.5 billion retail dollars coming in from Mexico. But then the recession lessened demand for oil, oversaturating the market. Mexico's export revenue plummeted. Its foreign debt increased, coupled with an inability to pay it. In '82 the peso devalued, and then again, and again, and suddenly all that retail income Laredo saw from across stopped, like a faucet turned off. At the bank's last estimate, at least seven hundred businesses in Laredo have closed, leaving tens of thousands of people without a way to support their families.

At the window, Lore pulls back the thick curtains to see the Zócalo, the pulsing heart of the Centro Histórico. In the fifteenth century, the area was the center of the Aztec capital of Tenochtitlán. Now it's bordered by the Metropolitan Cathedral, built in sections over nearly two hundred and fifty years, and the National Palace and Federal District buildings, their stone facades soaked with sun and blood. Near the towering Mexican flag, tourists in jeans and T-shirts— they are the ones winning, the tourists—salsa dance before a street performer. She can nearly feel their laughter. Her chest seizes with the desire to join, join, join. To see Fabian's eyes glow rich as molasses in the sun, to feel his hand firm around her hip.

Fabian. She should call him. At the thought, the image of dancing-Fabian fades, replaced with the surly reality of her husband. She doesn't want to talk to him. Or—she doesn't want to talk to this version of him. If she could choose, she'd call upon the eighteen-year- old Fabian, who'd sat with her in a blind and said, "Close your eyes." She had expected him to kiss her. Instead, they had listened to the wind, to the birds, to, eventually, the soft scuffle of hooves, and when she opened her eyes there was a family of deer eating the corn they'd spilled from the back of his dad's truck. Two spotted fawns tugged at their mother's teats as she flicked them away impatiently, her jaws cracking the rock-hard kernels. Fabian smiled at Lore, shotgun by his side. "Don't," she said. And he laughed softly. "Of course not," he replied.

She looks at her watch: four o'clock. It will be cheaper to call him later tonight. Of course, there will be no "later tonight." The wedding will continue until morning, when everyone is too drunk to stand. In any case, she'll be home tomorrow.

She hangs her red gown in the closet and draws a bath. Light glints off the gold mirror. Drapery is tied back from the tub with gold rope, as if the tub is a stage, the actors moments from their entrance.

Excerpted from More Than You'll Ever Know by Katie Gutierrez. Copyright © Katie Gutierrez 2022. Reprinted with permission from William Morrow, a division of HarperCollins Publishers.