Maroon 5 made headlines this week when news broke that the group would not be giving a pre-Super Bowl press conference for its upcoming halftime performance. On Thursday, however, the group's front man broke the silence.

In an interview with "Entertainment Tonight," Maroon 5's Adam Levine said it was the NFL's decision to cancel the customary pre-game news conference, but he declined to offer additional details.

"The NFL canceled the press conference, so you'll have to speak with them," he said.

"When you look back on every single Super Bowl halftime show, people just can't — it's this, like, insatiable urge to hate a little bit," the singer added. "I'm not in the right profession if I can't handle a little bit of controversy. It's what it is. We expected it. We would like to move on from it, and like, I said earlier, speak through the music."

The interview came after months of backlash that not only headliner Maroon 5 has been facing, but supporting acts Travis Scott and Outkast's Big Boi have also been dealing with, for agreeing to perform amid boycotts and protests against the league's alleged treatment of former 49ers quarterback Colin Kaepernick. 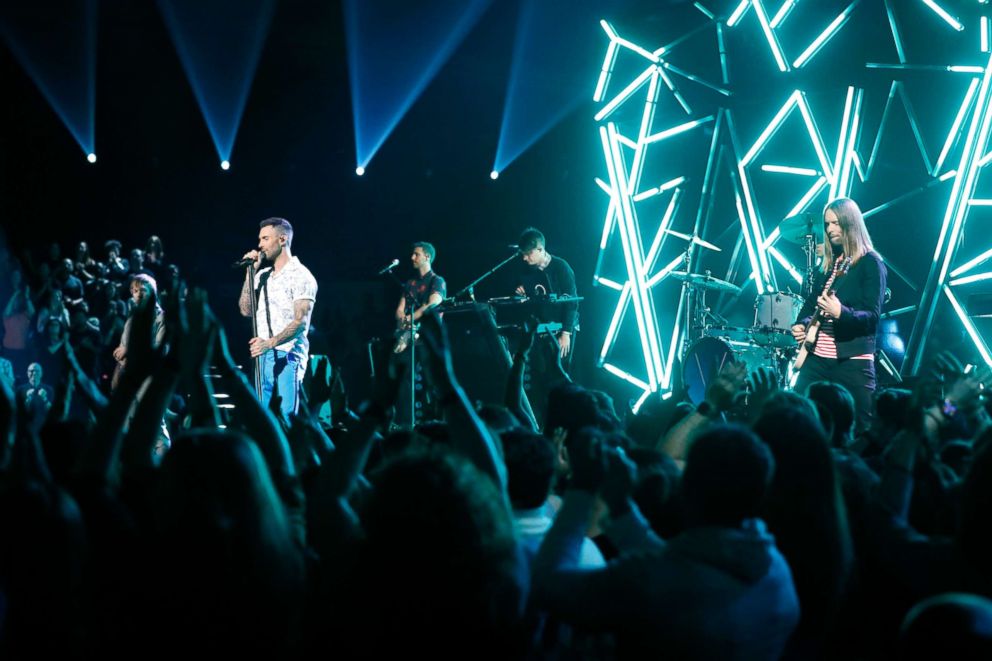 Trae Patton/NBCU Photo Bank via Getty Images
Adam Levine performs alongside other members of Maroon 5 on "The Voice."

Levine didn't give away details about the band's performance in Atlanta on Sunday, but he said they're aiming to be a voice for the voiceless.

"They will be [heard]. That's all I want to say because I don't want to spoil anything. I've never been more excited in my life to present this to the people because I believe it's a representation of all of us," he said. "We are going to keep doing what we are doing hopefully without becoming politicians to make people understand, we got you."

"If you're going to cross the ideological or intellectual picket line then own it, and Adam Levine certainly isn’t owning it," Geragos told ABC News' George Stephanopoulos. "In fact, if anything, it’s a cop-out when you start talking about, 'I’m not a politician I’m just doing the music.' Most of the musicians who have any kind of consciousness whatsoever understand what's going on here."

Geragos said Maroon 5 and the other artists should have never agreed to perform and must remember what Kaepernick is fighting for.

Kaepernick famously took a knee during the national anthem in 2016 to protest racism and police brutality and was dropped from the team after the close of that season. Kaepernick filed a grievance against league owners last year alleging that they colluded to ensure that he remains unsigned.

"Colin took a knee in a very deferential way to express what he sees as systemic oppression and racism in America. He has been blackballed because of that," Geragos said on "GMA."

His divisive protest quickly caught fire in 2016 and had hundreds of other players doing the same. Reactions from NFL team owners, players and fans were mixed, as some felt like it was a dig at U.S. vets, while others felt it was a peaceful way to bring Kaepernick's message to light.

Maroon 5 and Scott have tried to quell the noise from critics, with each donating $500,000 to the organizations Big Brothers Big Sisters of America and Dream Corps, respectively.

(MORE: Why performing in this year's Super Bowl Halftime show is so fraught with controversy)

"Playing the Super Bowl has been a dream of our band for a long time," he said in a statement to E! News. "We thank the NFL for the opportunity and also to them, along with Interscope Records, for making this donation to Big Brothers Big Sisters, which will have a major impact for children across the country."

Scott also released a statement to Billboard, which read, "I back anyone who takes a stand for what they believe in. I know, being an artist, that it’s in my power to inspire. So before confirming the Super Bowl Halftime performance, I made sure to partner with the NFL on this important donation. I am proud to support Dream Corps and the work they do that will hopefully inspire and promote change."

For its part, NFL launched the "Inspire Change" initiative earlier this month to support criminal justice reform, building relationships between police and the community, education and economic advancement.