The Duchess of Sussex is marking an important royal first today: Her first solo engagement with Queen Elizabeth.

Meghan Markle, 36, and Queen Elizabeth, 92, traveled from London to Cheshire in the royal train for a day of engagements.

The Duchess of Sussex arrives in Cheshire, where she is accompanying Her Majesty The Queen for a day of engagements today #RoyalVisitCheshire pic.twitter.com/tHXPeN3nL5

Her Majesty gifted Meghan a pair of pearl and diamond earrings for today's visit. 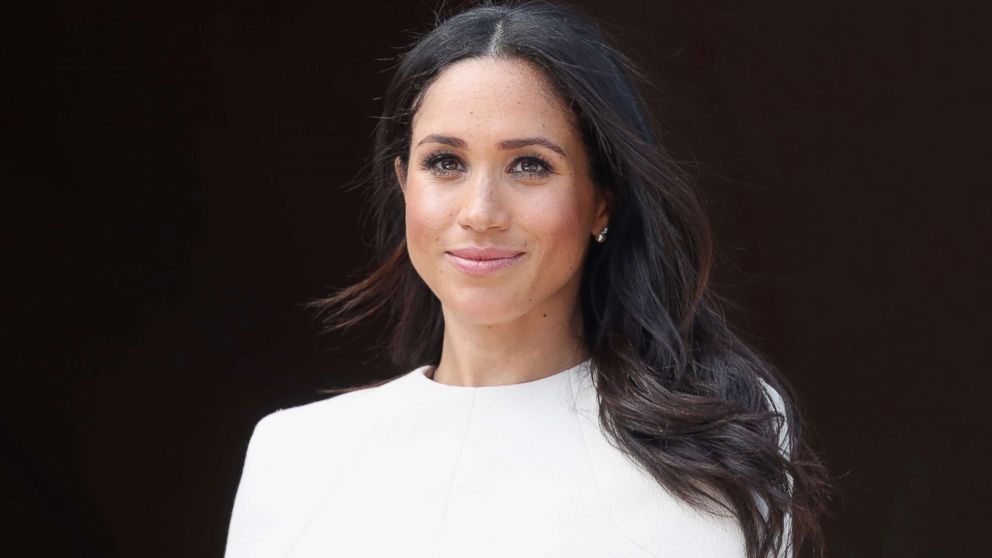 Meghan, who wed Queen Elizabeth's grandson, Prince Harry, on May 19, gushed about her life with her new husband.

When asked about married life, Meghan replied that it is "wonderful."

"I’m really enjoying it," she said. "He’s the best husband ever."

Meghan and Queen Elizabeth's first stop today was the opening of the Mersey Gateway Bridge. 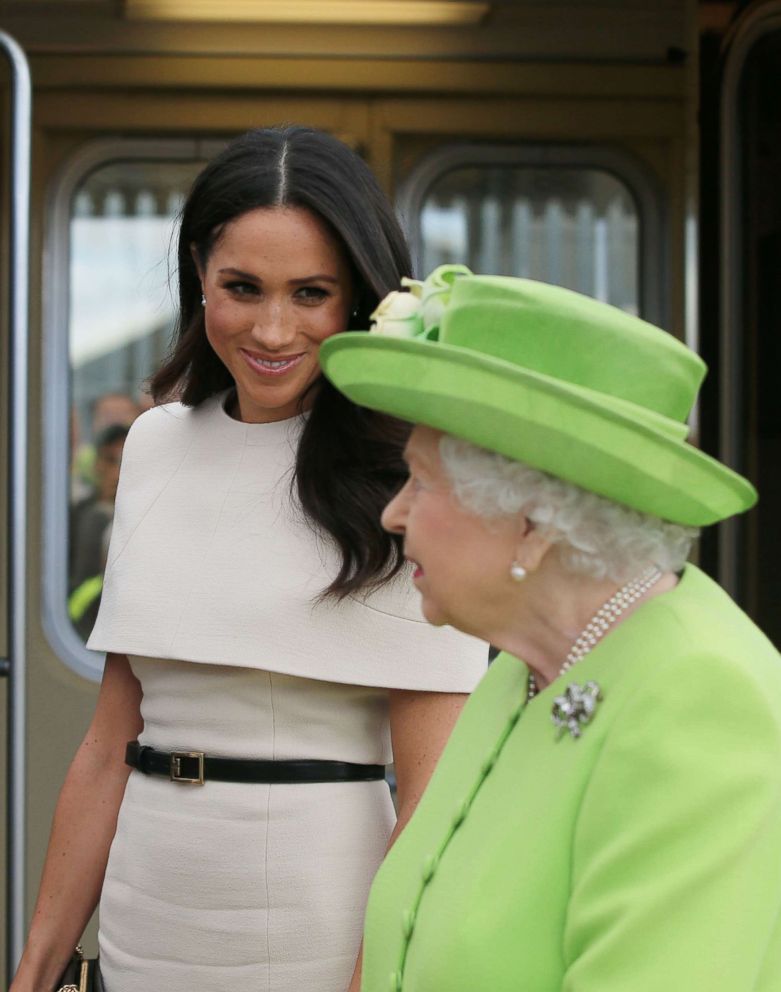 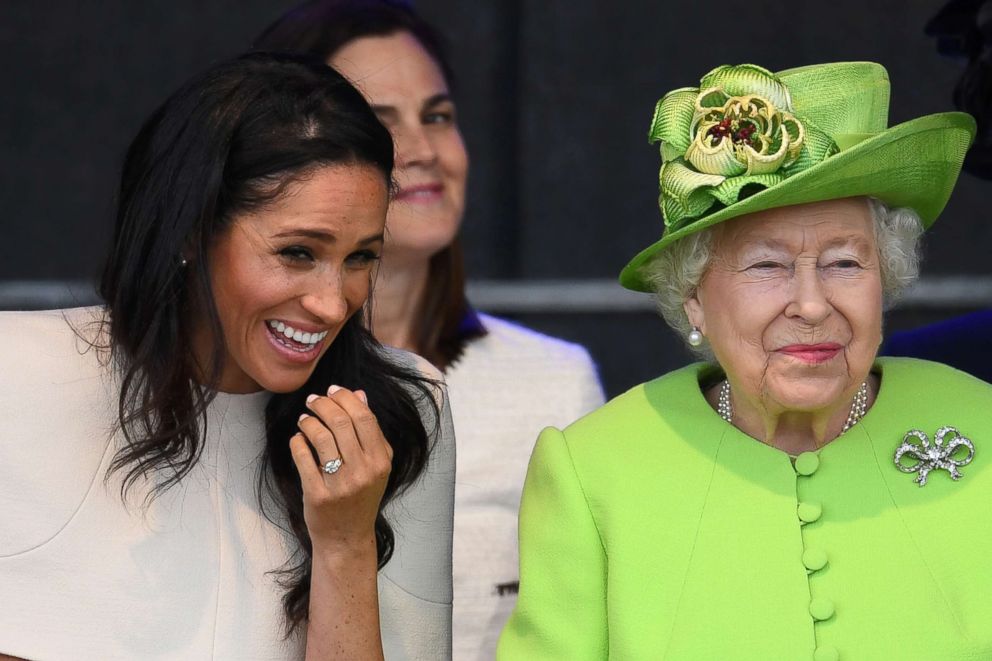 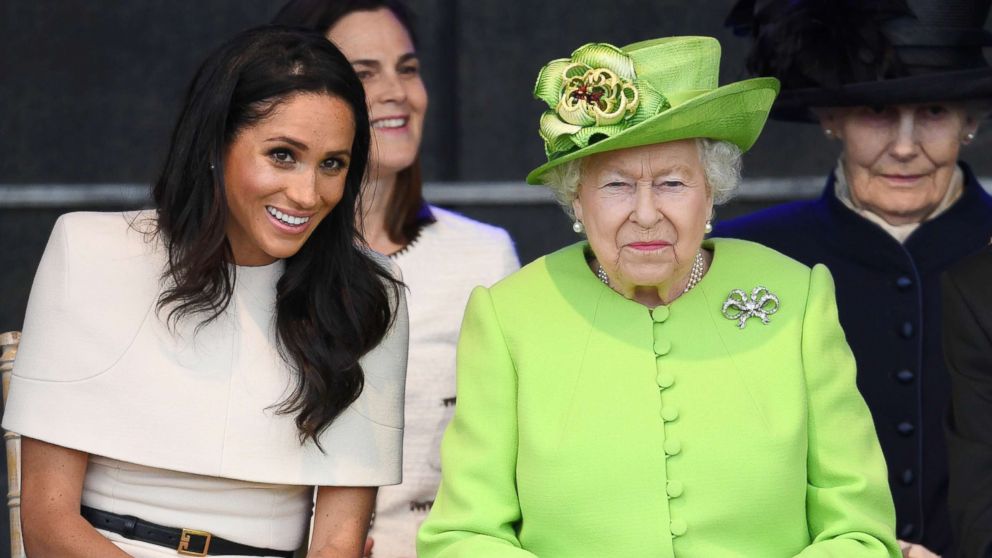 Getty Images
Meghan, Duchess of Sussex and Queen Elizabeth II laugh during a ceremony to open the new Mersey Gateway Bridge, June 14, 2018, in the town of Widnes in Halton, Cheshire, England. 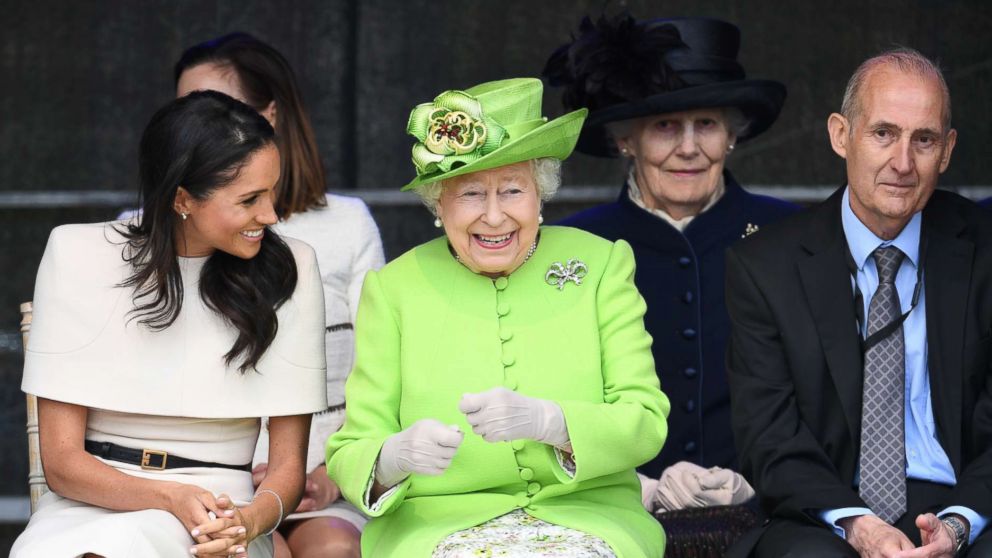 The Queen and Meghan later visisted Storyhouse, a theater and library in Cheshire, where they met with children and watched a performance by a dance theater company for people in recovery from addiction. 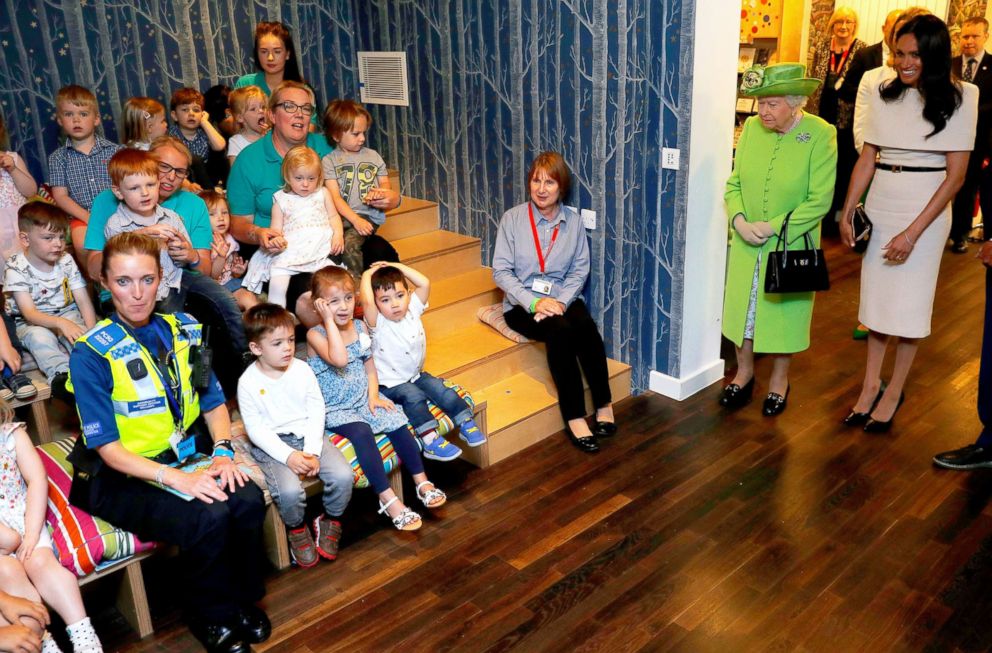 Phil Noble/Getty Images
Children sit as Queen Elizabeth II and Meghan, Duchess of Sussex arrive for their visit to the Storyhouse, June 14, 2018, in Chester, England.

Meghan appeared a bit nervous at her first solo engagement but took her lead from Queen Elizabeth. She was also supported by Samantha Cohen, the Queen's longtime assistant private secretary and one of her closest and most trusted courtiers, who recently moved over to run Meghan and Harry’s office.

Meghan could be seen turning to Cohen for guidance and advice during today's visit. Cohen was at her side to support Meghan and put her at ease.

In the main floor at @Storyhouselive, The Queen and The Duchess of Sussex sit to view a performance of ‘Drop in the Ocean’. #RoyalVisitCheshire pic.twitter.com/z4G9WgPRTC

The Duchess of Sussex joins The Queen to meet a Digital Buddies group at @Storyhouselive ?? #RoyalVisitCheshire pic.twitter.com/WFf7Ybtia1

The duo concluded their visit with lunch at Chester Town Hall.

Thank you Lilja, aged 7, and Nye, aged 6 for the beautiful posies for The Queen and The Duchess of Sussex #RoyalVisitCheshire ?? pic.twitter.com/7SeMBhww4y

The Duchess of Sussex joins The Queen for a walkabout to meet members of the public in Chester city centre #RoyalVisitCheshire pic.twitter.com/EQ1Q1izlTI

Meghan's solo visit with Queen Elizabeth shows how warmly she has been embraced by the royal family. 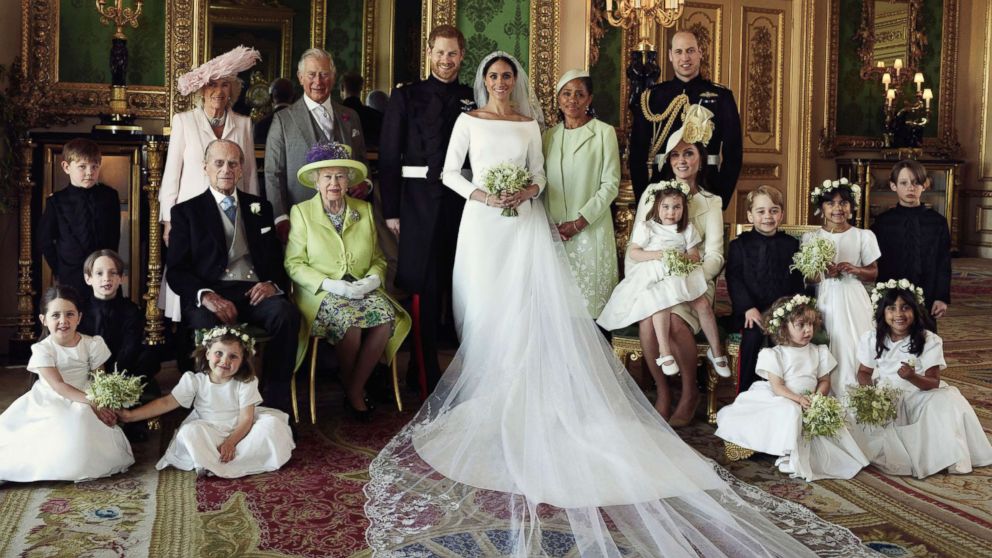 Alexi Lubomirski/Kensington Palace via AP
An official wedding photo of Britain's Prince Harry and Meghan Markle, with the royal family at Windsor Castle in Windsor, England, May 19, 2018.

Since her wedding to Prince Harry on May 19, Markle has attended a Buckingham Palace event to celebrate her father-in-law, Prince Charles, who walked her down the aisle at St. George's Chapel, and made a second high-profile appearance with the royal family.

Meghan stood out in an off-the-shoulder pink dress by Carolina Herrera on June 9 at Trooping the Colour, the official celebration of Queen Elizabeth's birthday. 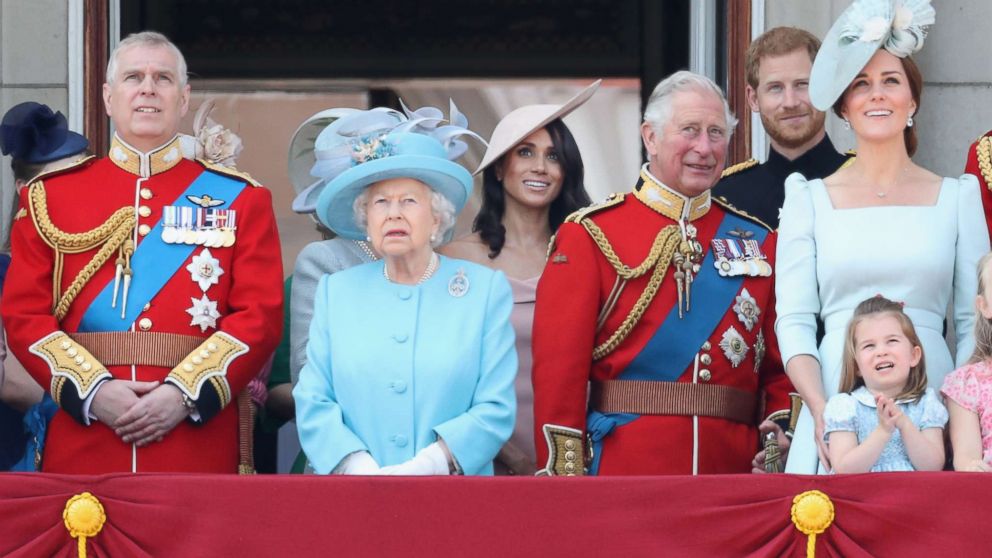 Chris Jackson/Getty Images
The royal family, including Queen Elizabeth II and Meghan, Duchess of Sussex, watch the flypast on the balcony of Buckingham Palace during Trooping The Colour on June 9, 2018 in London.

The Duke and Duchess of Sussex are joined by The Duke of Kent as they attend Trooping the Colour, The Queen's Birthday Parade, for the first time together #TroopingtheColour pic.twitter.com/4k9Gtei7cp

Princess Kate accompanied Queen Elizabeth during her Diamond Jubilee tour for her first solo visit in March 2012, nearly 10 months after her April 2011 marriage to Prince William. The monarch and Kate traveled by train for the event but did not overnight on the royal train as Meghan is doing with Queen Elizabeth.

What's next for Harry and Meghan

The Duke and Duchess of Sussex have jumped back into royal life since returning from their honeymoon earlier this month.

The couple will make an official visit to Australia, Fiji, the Kingdom of Tonga, and New Zealand later this year.

The Duke and Duchess of Sussex will undertake an official visit to Australia, Fiji, the Kingdom of Tonga, and New Zealand in the Autumn ????????????????

The tour will fall on the occasion of @InvictusSydney 2018. pic.twitter.com/BWlU14WM66

Their tour will include a stop in Sydney in late October for the 2018 Invictus Games, the paralympic-style sporting event Harry founded for servicemen and women.

Meghan's first charitable patronage since becoming the fourth member of the Royal Foundation, started by William, Kate and Harry, is also expected to be announced soon by Kensington Palace.

While the palace has not given any indication how Meghan will focus her charitable work, given her previous interest in women’s empowerment, she may select a charity that benefits from her experience on that issue.