The #MeToo movement is releasing a new campaign aimed at giving back to survivors on the third anniversary of the now-famous hashtag going viral.

The "Act Too" initiative is a digital platform that contains technology outlining actionable measures one can take or commit to in order to work toward ending sexual violence. The platform relies heavily on community engagement and records each step taken in the fight to advance the #MeToo movement.

Tarana Burke, founder of the #MeToo movement, describes the new campaign as "a labor of love."

She said too much of the brunt of advancing the movement has been put on the backs of survivors.

"When #MeToo first went viral, there was so much energy around it and so much attention paid in various ways, negative and positive, but very little of that attention was directed at the people who actually said #MeToo," she added.

MORE: After Weinstein sentencing, Tarana Burke on what's next for the #MeToo movement 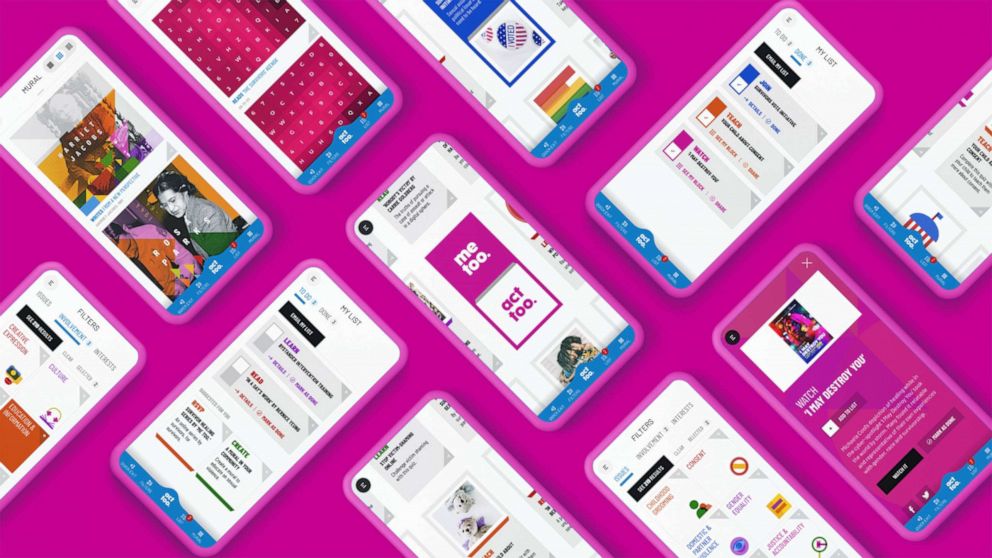 FCB/SIX
A screen grab of the digital platform is seen in a promotional image from the 'me too.' Act Too campaign.

"This issue that became a huge, hot-button issue had made no offering back to the people who actually made it a movement," she continued. "There's no movement without survivors coming forward, and naming their trauma and naming their experience."

The activist worked with the team at Toronto-based creative agency, FCB/SIX, to find a way to make the fight against sexual violence more accessible by allowing each person committed to a world without sexual violence to be responsible for their own contributions to the fight.

She wanted those who haven't been affected by sexual violence to find a way to contribute beyond sharing support for the hashtag.

"I think that what happened is that when something goes viral, it is mainstream -- it's very public in a very specific way," Burke explained. "So the people who are engaged with it aren't people who have been committed to the field, or who have studied the issue or who are intimately connected to the issue outside of their personal experience."

"So when you say movement, they're like, 'Oh, what's the movement? We've got to put a hashtag up? Okay, I put the hashtag up. Now what?'" she continued. "And we're like, 'No, no ... that's not the movement. Hashtags aren't movements -- they amplify movements.'"

Act Too offers people ways to contribute beyond the hashtag by curating lists of events or causes you can commit to based on your geographic location.

MORE: Sexual assaults have not stopped during <a href="https://abcnews.go.com/alerts/coronavirus" id="_ap_link_coronavirus_Coronavirus_" target="_blank">coronavirus</a> pandemic: Here's how to get help

The platform offers recommendations for both tangible actions -- volunteering at an event or march -- and micro-actions, such as educating oneself with books or films on the subject. 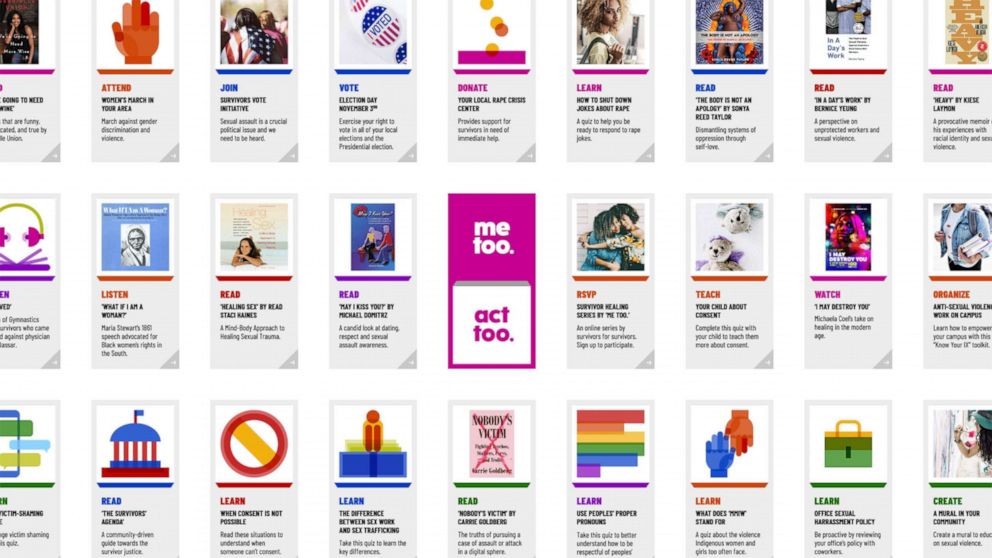 FCB/SIX
A screen grab of the digital platform is seen in a promotional image from the 'me too.' Act Too campaign

The platform contains a blockchain record of actions taken, which Burke describes as a way for supporters of the #MeToo movement to "create and make and record our own history."

"A lot of people thought #MeToo going viral was the dawn of a movement to end sexual violence when it was really just another iteration, a furthering of a movement that has been going on for decades," she explained.

"Part of the reason why people in mainstream didn't know about that is because nobody is writing that story for us, and the people who tend to write the stories are usually the people who cause the harm and the oppression," she added. "So if we don't write our own stories, if we don't keep track of our own movement, then somebody else will write it."

Each action taken through Act Too will be represented by a square, and the squares will merge together to form different murals showcasing those who have made contributions to fighting sexual violence.

The rollout of the initiative also coincides with Domestic Violence Awareness month. There has been a dramatic increase in domestic violence reports during the COVID-19 pandemic.

This increase comes at a time when the National Coalition Against Domestic Violence reports nearly 20 people per minute in the United States are physically abused by an intimate partner. The CDC reports nearly 1 in 5 women have experienced completed or attempted rape in their lifetimes, while nearly 1 in 38 men have experienced completed or attempted rape during their lifetimes. 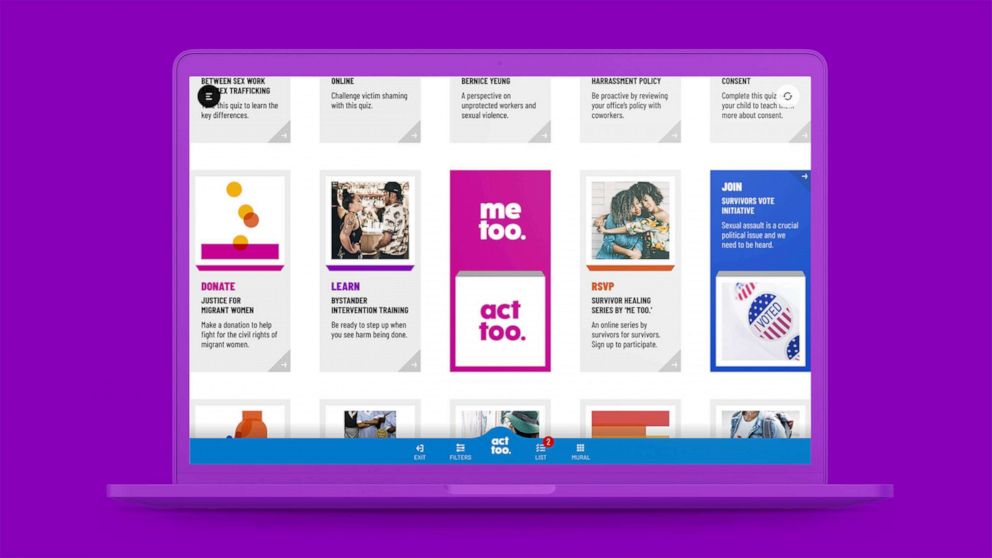 FCB/SIX
A screen grab of the digital platform is seen in a promotional image from the 'me too.' Act Too campaign.

The timing of the new campaign is extremely relevant because so many people across the United States are looking to make an impact right now, she added.

"They are looking for ways to be a part of this," Burke said. "We are finally having sort of this awakening or reckoning around the idea that if we are not active in this social justice movement then progress won't happen."