Michael Jordan has been hailed the greatest basketball player of all time and his unmatched talents on the court will once again be on display in a new documentary series, "The Last Dance," that regales his final season with the legendary Chicago Bulls. 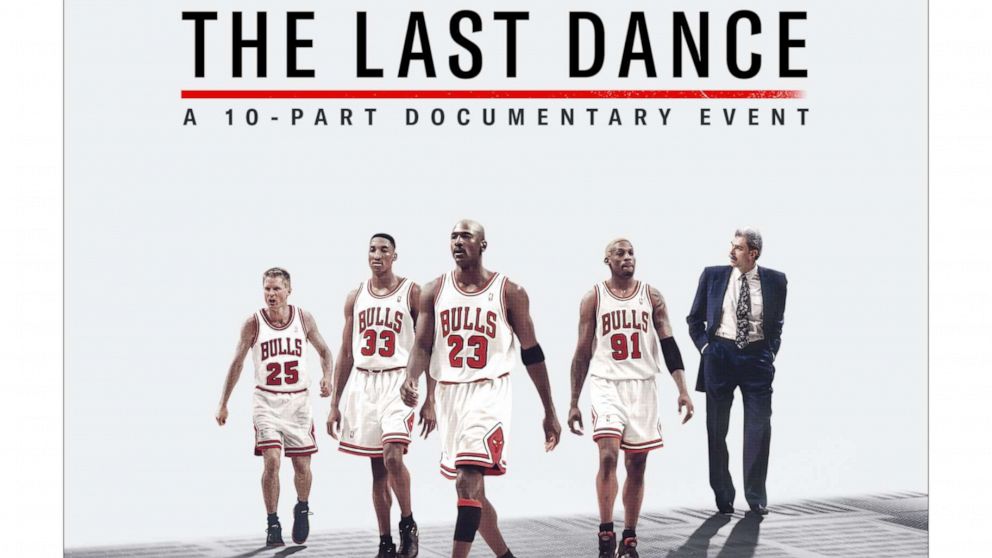 ESPN
The poster of ESPN's documentary film, "The Last Dance."

The highly anticipated 10-part ESPN and Netflix production with never before seen footage, follows Jordan during the 1997-98 season and gives a glimpse behind the curtain of the team's dramatic road to the epic final showdown that cemented them as one of the greatest dynasties in sports history.

Jordan, who is currently at his home in Florida with his wife and two of his children, joined "Good Morning America" on Thursday to discuss the upcoming series and share what he remembers most about that final year.

"It was a trying year, we all were trying to enjoy that year knowing that it was coming to an end," he explained. "Phil [Jackson] started off the year by saying, 'this is the last dance,' and we played it that way." 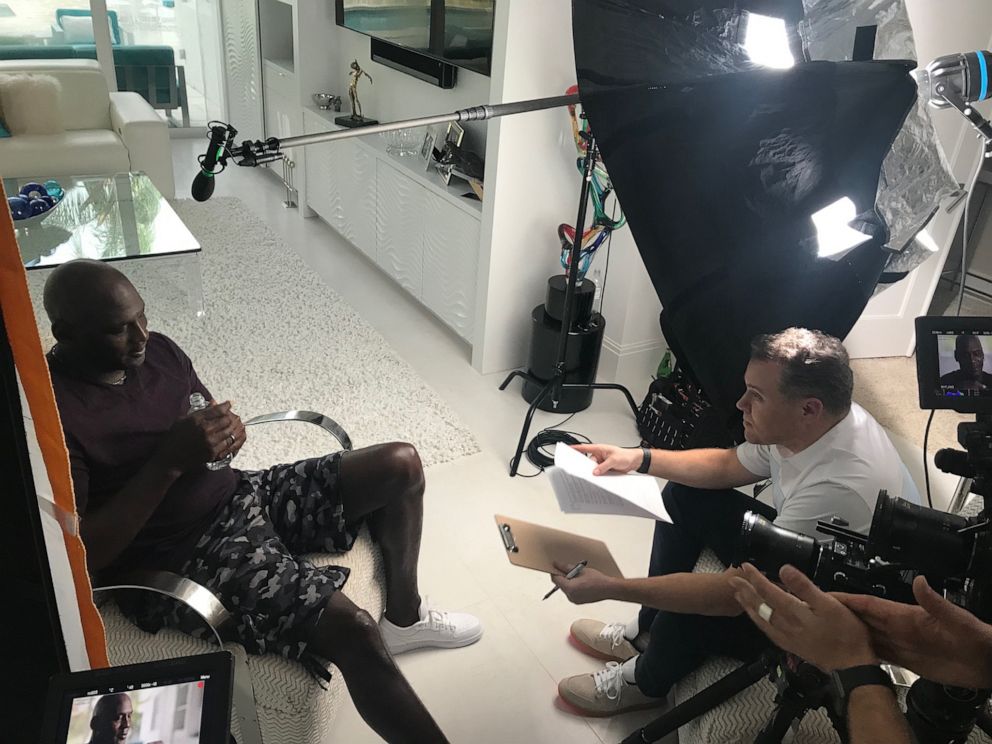 Jason Hehir/ESPN
An undated photo shows Michael Jordan sitting during an Interview for the new documentary film, "The Last Dance."

"Mentally it just kind of tugged at you throughout the course of the year, you know, but that this had to come to an end but it also centered our focus to making sure we ended it right," Jordan continued. "As sad as it sounds at the beginning of the year we tried to rejoice and enjoy the year and finish it off the right way."

Jordan spent 15 seasons in the NBA, led the Chicago Bulls to six championships, was a six-time NBA Finals MVP, two-time Olympic gold medalist and 14-time NBA All-Star -- just to name a few of his top accolades.

The retired NBA superstar said the series that serves as a retrospective of his basketball career will also look back to simpler times when he was playing college ball for the Tar Heels at the University of North Carolina.

"You're gonna see a lot of things that people forgot life was that way," he said, recalling times before the era of social media. "The thing that people are going to learn, and my kids laugh about it when they see it, but we used postage stamps back in those days, you know. Where I had to ask my mom to send my postage stamps."

He continued, "you had to live life as it came, you know, and each day you learned the education aspect, spending time with friends and family, it wasn't via the phone, you know, it was actually in presence and you wrote letters." 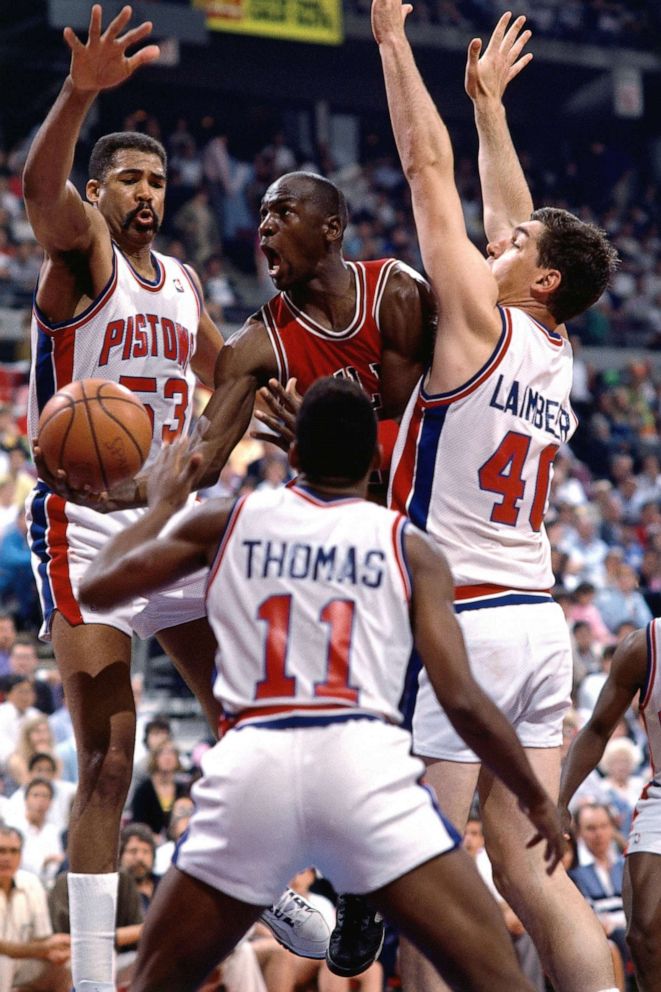 Andrew D. Bernstein/NBAE
Michael Jordan #23 of the Chicago Bulls drives to basket against the Detroit Pistons during the 1989 season NBA game in Detroit.

"My mom, she kept all my letters," he said. "It's somewhat embarrassing, but yet it's refreshing that I took the time to write a letter to say how much I love my mom and, you know, what I needed in college."

ESPN originally planned to release the documentary in June to coincide with what would have been the NBA Finals, but moved up the release two months amid the coronavirus pandemic to provide fans stuck at home with something exciting to watch during these tough times.

The series flashes back to some early career highlights at North Carolina, like his buzzer beater in '82 to win the NCAA title, which he said was the moment he went from Mike to Michael Jordan.

"Up until that point no one knew who I was -- outside the university -- I was just known as Mike Jordan," he said. "And when I hit that shot, my whole name became Michael Jordan. And I think it resonated with a lot of people outside of UNC and I just started piling on that name itself -- from the successes that I endured throughout the rest of my career."

There was no team more dominant in the '90s than the Chicago Bulls led by Jordan, who became a cultural icon on top of his unmatched athleticism. 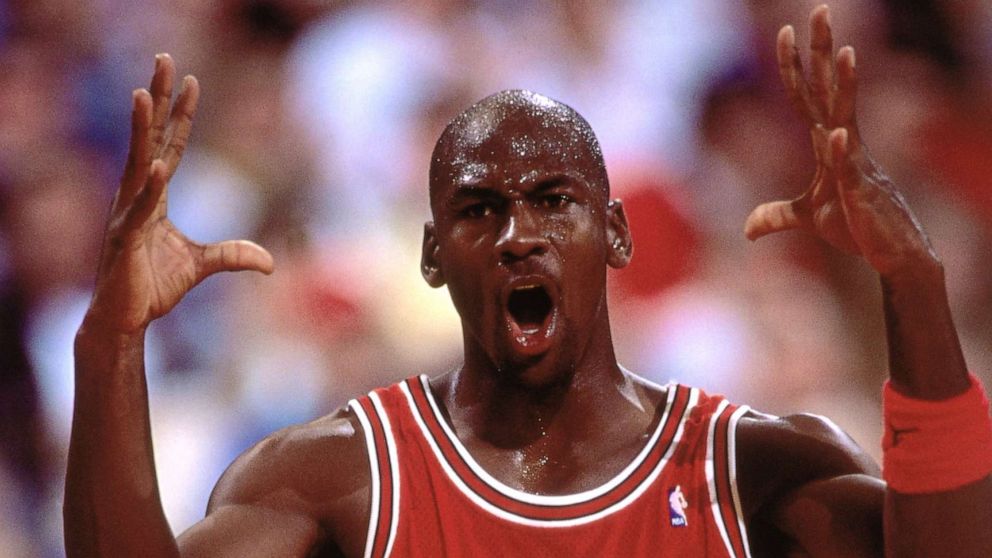 Brian Drake/NBAE
Michael Jordan #23 of the Chicago Bulls shows emotion against the Portland Trailblazers during a game played at the Veterans Memorial Coliseum in Portland, Ore., circa 1991.

With teammate Scottie Pippen by his side, the duo commanded the league for nearly a decade and created a legacy for the Bulls as one of the greatest sports dynasties of all time.

Jordan became widely known as "Air Jordan" for his prolific slam dunks followed by his signature tongue out celebration, but it was perseverance that his parents instilled in him that he said carried him throughout his career beyond the basketball court.

"They were hardworking people and they instilled that not just in me but in my brothers and sisters," Jordan said. "It just became a part of my nature I always take a negative and turn it into a positive -- that all came from my parents." 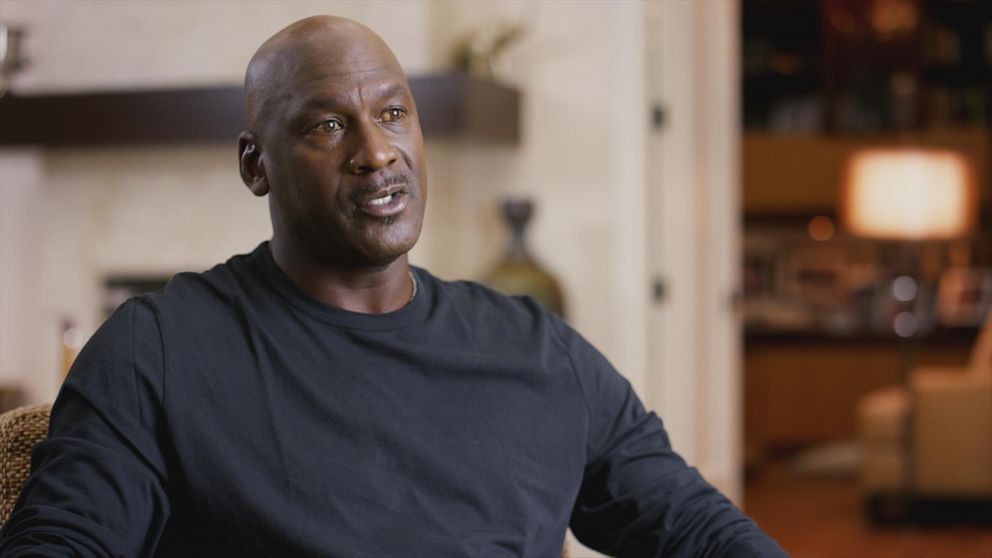 ESPN
An undated photo shows Michael Jordan sitting during an Interview for the new documentary film, "The Last Dance."

He also hailed his brother Larry for his unwavering support and helping him become the man and player he turned out to be.

"I wouldn't be here if it wasn't for my brother Larry. Larry pushed me and we used to fight after every game, but through that fight, you know, emerged someone like me," he said. "He supports me and he works for me and the team and I never would have gotten this far without him."

The series debuts on ESPN Sunday at 9 pm ET and will air over five Sundays through May 17 with two 1-hour broadcasts per week.