The novel follows 35-year-old Mika Suzuki, whose life is a mess. Her last relationship ended in disaster, she is constantly letting down her traditional Japanese parents and she's just been fired from her latest dead-end job.

Her world changes when Mika receives a phone call from Penny, the daughter she placed for adoption 16 years ago. Penny wants to start a relationship with Mika and Mika desperately wants to be someone Penny can be proud of. What begins as an embellishment of the truth becomes a full-blown fake reality -- one where Mika's alter-ego is put-together and successful at work and in her love life.

The more Mika shares her real hopes and Japanese heritage with her curious daughter and Penny's adoptive widower father, the more she begins to question who she is and what life she wants to lead.

Mika is forced to face the truth about herself and her past: Just who is Mika in real life?

"This book was definitely driven by my desire to explore certain themes -- the bond and often tense relationship between mothers and daughters, the Japanese American identity and intergenerational trauma," Jean said.

"Mika in Real Life" also was Jean's chance to "rethink representation" in art.

"As a woman of color, growing up in the United States, I didn't see myself in the media I consumed," Jean said. "You can imagine what this must teach a child about their value and worth in the world." 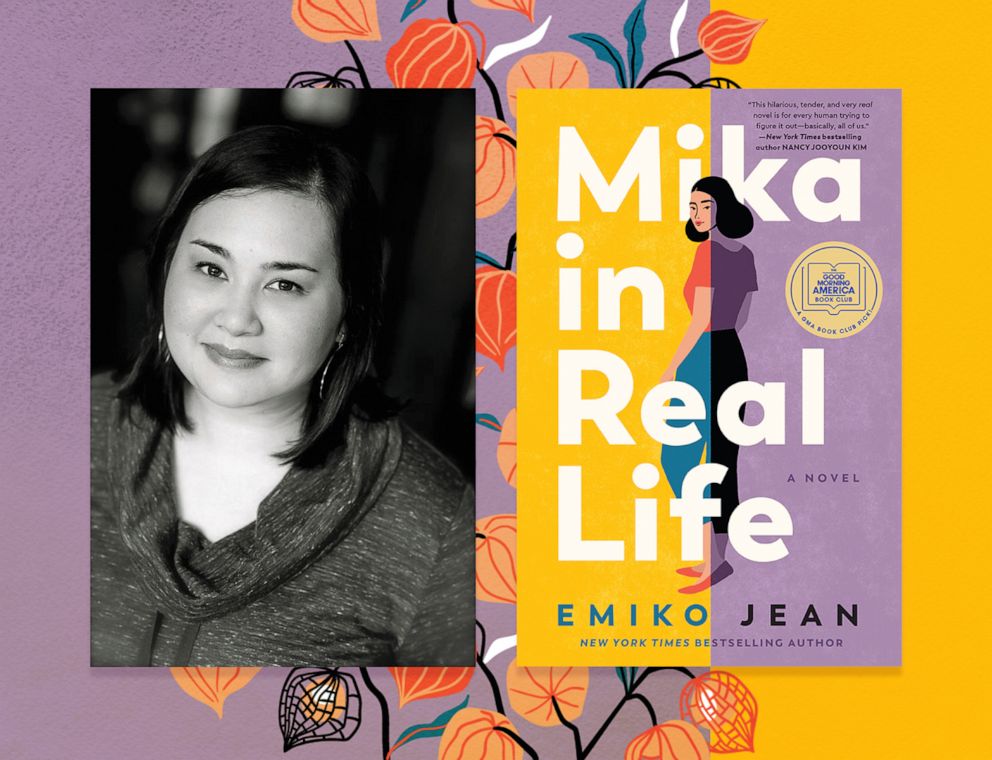 Read and listen to an excerpt below and get a copy of the book here.

In this brilliant new novel by from Emiko Jean, the author of the New York Times bestselling young adult novel "Tokyo Ever After," comes a whip-smart, laugh-out-loud funny, and utterly heartwarming novel about motherhood, daughterhood, and love -- how we find it, keep it and how it always returns.

HarperAudio US · MIKA IN REAL LIFE by Emiko Jean

Audio excerpted courtesy HarperAudio US from MIKA IN REAL LIFE by Emiko Jean, read by Sura Siu and Andi Arndt.

The faint scent of stale popcorn. The emotionally healing candles on clearance. What was it about this particular store that sucked Mika in? She stood in the home section, examining a pillow embroidered with the saying MONEY CAN BUY A HOUSE, BUT NOT A HOME. On the phone, Hana laughed. "So, let me get this straight. He asked you out at the same time he was firing you?"

"Directly after," Mika corrected. Greg had escorted her to her desk, watched while she packed up her stuff, and then asked if she'd like to see a movie later or maybe attend the Cherry Blossom Festival at the university next weekend. The angry humiliation ran deep.

"You're in a Target," Hana pointed out.

Mika tilted her head, contemplating the pillow. It was designed by a couple who had become filthy rich making new houses look old. It was all about the shiplap. The pillow could be hers for $29.99. "I never thought I'd be laid off and sexually harassed all in the same day. It's a new first." Mika bypassed the pillow and went on to the wine section. Her pocketbook was lighter, but a five-dollar bottle of wine was a necessity.

Hana made a sympathetic noise. "It could be worse. Remember the time you were fired from that donut shop for keeping a box of maple bars in the freezer and eating them between filling orders?"

"That was in college." Mika tucked the phone between her ear and shoulder. Finished choosing wine, she was in the food aisle now, filling her basket with Cheez-Its. Class all the way.

"Or that nanny job for showing the kids 'The Shining?'"

"They said they wanted a ghost story," she defended.

"How about when you wrote X-rated Predator fan fiction, then left it open on your work computer?"

Confusion rippled across her face. "That never happened." Hana laughed again. Mika rubbed her forehead, feeling as if she'd fallen from an unlucky tree, hitting every branch on the way down, then landing in a pit of snakes and bears. "What am I going to do?"

"I don't know. But you're in good company. I found out this morning Pearl Jam chose Garrett for their summer tour." Hana was an ASL interpreter for bands, and Garrett, having recently crossed over from the Christian alt-rock circuit, had edged into Hana's territory. "I'm probably going to have to do a bunch of Earth, Wind & Fire gigs now. Fucking Garrett. Come home. We'll eat and drink our feelings together."

"Will do." Mika hung up and dropped her phone in her purse. A minute passed. Mika wandered. Her phone rang. Might be Hana again. Or her mother -- Hiromi had already left a message that morning. I just stopped by the church and met the new congregant. His name is Hayato, and he works for Nike. I gave him your number.

Hiromi replied, Nothing. Why do you sound so winded? I wanted to tell you Fred Meyer is having a sale on chicken . . .Mika listened, temper rising. You can't call so many times. I thought something was wrong, she said. To which Hiromi scoffed, I'm sorry I'm not more dead for you. The ringing continued. Mika fished the phone from her purse and peered at the screen. A blocked number.

Curious, she swiped to answer. "Hello?" she said, brows knitting together. Shit, she thought too late. It could be the new congregant, Hayato. Quickly, she cycled through possible excuses. My phone is dying. I'm dying.

"Oh, wow! You picked up! I wasn't sure if you would!" a hyper-positive young voice said. The connection became muffled, as though a hand had been placed over the phone's speaker. "She picked up. What do I do?" the voice said to someone in the background.

"Sorry, my friend Sophie is here. You know, for moral support? Is this Mika Suzuki?"

"This is Penny. Penelope Calvin. I think I'm your daughter."

From MIKA IN REAL LIFE by Emiko Jean, published by imprint. Copyright © 2022 by Emiko Jean. Reprinted courtesy of HarperCollinsPublishers