Missy Elliot made history on Thursday when she became the first female hip-hop artist and the third rapper ever to be inducted into the Songwriters Hall of Fame.

Rapper and singer Lizzo, along with Chicago rapper Da Brat, performed at the ceremony to honor Elliot. She was inducted into the Hall of Fame by her friend and fellow rapper and actress Queen Latifah. In a video tribute that brought Elliott to tears, former first lady Michelle Obama thanked her for empowering young women.

.@MissyElliott gave a moving speech for her induction into the Songwriters Hall of Fame! She's the first female rapper to be nominated and inducted. #SHOF2019 @SongwritersHOF Photo Credit:
Getty Images for Songwriters Hall Of Fame pic.twitter.com/WaoOEk0hBE

"Missy, I want to thank you for all of your trailblazing ways," Obama said. "Thank you not for just sharing your gift with the world, but for being an advocate for so many people out there, especially young girls who are still figuring out how to make their voices heard."

The 47-year-old artist, whose full name is Melissa Arnette Elliott, has been a pioneer in hip-hop for more than two decades and has not only written her own Billboard-charting hits, but has also written for other iconic artists, including Beyonce, Aaliyah, Destiny's Child, Busta Rhymes, TLC, Timbaland and Ariana Grande. She is also set to release her first album since 2005.

"I want to say one thing to the writers, to the upcoming writers: Do not give up. We all go through writer's block," a tearful Elliot said. "Sometimes you just have to walk away from a record and come back to it. But don't give up because I'm standing here. And this is big for hip-hop, too."

Ahead of the ceremony she tweeted, "So many Amazing gifts today i am so humbly grateful...a gift from my mommy for getting inducted in the Songwriters Hall of Fame tonight. I Love you Mommy!"

So many Amazing gifts today i am so humbly grateful😩🙏🏾 a gift from my mommy for getting inducted in the Songwriters Hall of Fame tonight🥰❤️🤗 I Love you Mommy! pic.twitter.com/aW1zYKbE8T

The emcee released her debut solo album "Supa Dupa Fly" in 1997, and some of her most famous songs throughout the years include "The Rain," "Work It," "Get Ur Freak On" and "Lose Control," featuring Ciara and Fat Man Scoop. 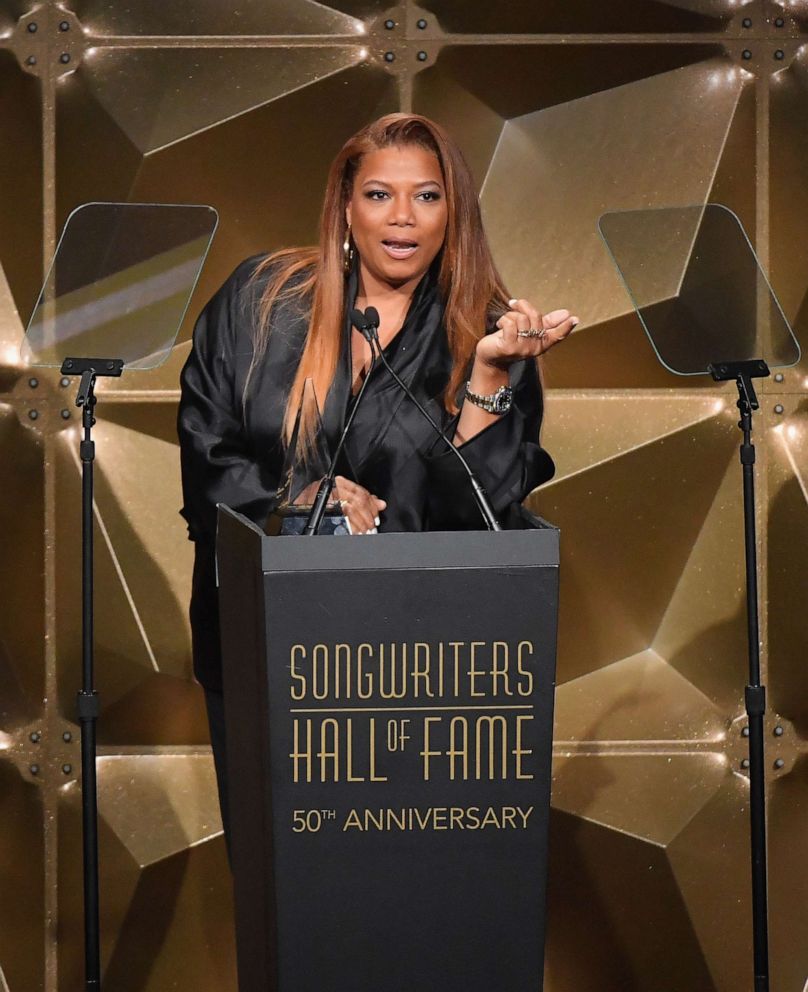 Describing her as "one of the most significant female artists in contemporary music history," the Songwriters Hall of Fame recognized Elliot for her solo work as well as her innumerable star-studded collaborations over the decades.

"Missy Elliott is a groundbreaking solo superstar, pioneering songwriter-producer, and across-the-board cultural icon. The five-time GRAMMY® Award winner — with nominations spanning three decades — has attained unprecedented success, including U.S. sales in excess of 30 million," the Songwriters Hall of Fame said in a statement. "Missy’s six studio albums have each been RIAA platinum certified or better, marking her as the only female rapper to achieve that remarkable accomplishment."

I want to CONGRATULATE all the AMAZING songwriters who have been inducted into the 2019 “Song Writers Hall of Fame🙌🏾🙌🏾 also those who were nominated because their body of work is AMAZING🙌🏾 I AM SO HUMBLY GRATEFUL to now be inducted also🙏🏾 I ❤️you all🤗 #SHOF2019 ✍🏾 pic.twitter.com/6LRHFoeVz1

"I want to CONGRATULATE all the AMAZING songwriters who have been inducted into the 2019 Song Writers Hall of Fame...also those who were nominated because their body of work is AMAZING...I AM SO HUMBLY GRATEFUL to now be inducted also... I [love] you all," the rapper tweeted in January when the 2019 inductees were announced.

Hip-hop mogul Shawn "Jay-Z" Carter became the first rapper to be inducted into the Songwriters Hall of Fame in 2017. 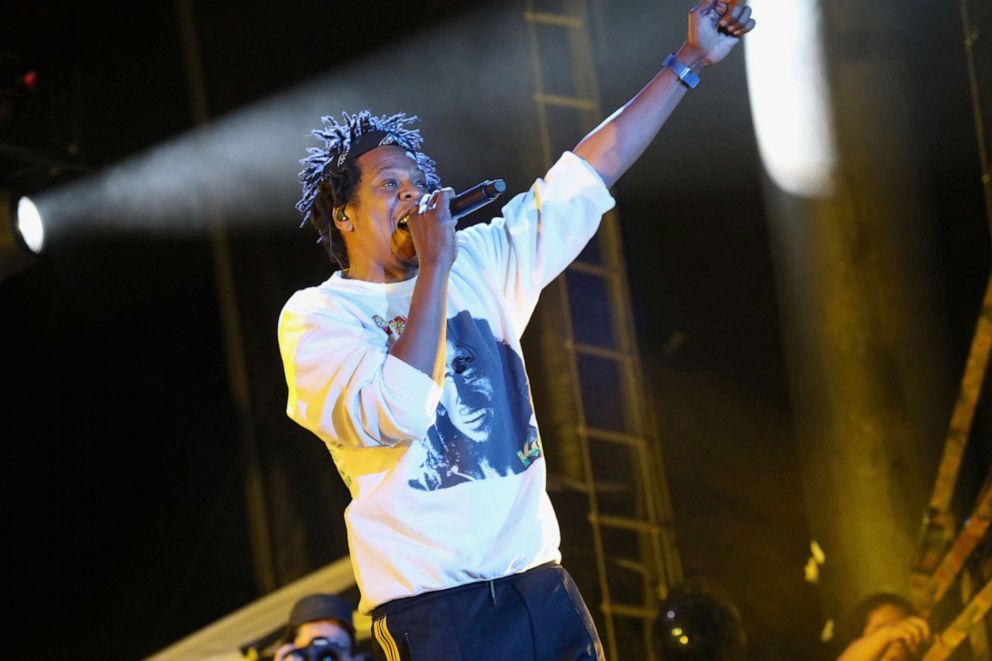 Although Jay-Z was absent at the ceremony because his wife, Beyonce, was due to give birth, several of his family members were in attendance.

Then-President Barack Obama delivered a speech via satellite to honor Jay-Z. His friend Jon Platt, CEO of Warner/Chappell Music Publishing, delivered an acceptance speech on his behalf, reflecting on hip-hop's role in the industry.

"[Jay-Z] understands what his work means to his millions of fans around the world just as much as he understands how important it is that he’s becoming the first rap artist to be inducted into the Songwriters Hall of Fame. And he also knows that so many came before him that didn’t get this opportunity and didn’t receive this honor," Platt said.

"You see, when it comes to the industry’s biggest honors, the hip-hop community has a very long history of being told, 'You’re not songwriters,' 'You’re not quite there yet,' 'It’s not your time yet.' Well, to all the songwriters and artists from our community and our generation, Jay would want you to know that this induction is a signal that your time has come and your time is now. He would tell up-and-coming hip-hop artists today that there can be no mistake or question that you are indeed songwriters, and your gift cannot ever be overlooked. And Jay would want you to know that as proud as he is to be the first, he’s even more proud that he won’t be the last."

Last year, Jermaine Dupri became the second rap artist to be inducted into the Songwriters Hall of Fame.

"I actually will be the first hip-hop artist to attend and get inducted because last year, Jay-Z didn't get to go because Beyonce was pregnant," Dupri told the Associated Press at the time. "So I'm the first person to grace that stage from the hip-hop world, so I'm excited about that and I gotta come in there with my swag."

Dupri, whose career began in the early 90s, has worked with artists including Jay-Z, Usher, Alicia Keys and Mariah Carey, who spoke at the Hall of Fame ceremony honoring him. Some of his most famous songs include Usher's "Confessions."

"Congratulations [Jermaine Dupri] on getting inducted into the [Songwriters Hall of Fame]!! See ya in the studio to continue making magic," Carey tweeted at the time, shouting out some of the most iconic songs they worked on together.