Paris Hilton lives a glamorous life, but for years she hid a dark secret from everyone, including her family: She was allegedly abused at a youth treatment center in Utah when she was a teen.

The entrepreneur and influencer told "Good Morning America" that during her stay at Provo Canyon School in the 1990s, she was "physically abused, yelled at, restrained, locked in rooms, forced [to take] medication." She also said that male staff members watched her shower.

"It was the most painful and traumatic experience of my life," she told "GMA." "I had basically no human rights. I was cut off from the outside world, wasn't allowed to speak to my parents without being supervised. The fact that it's still happening today -- I just can't sleep at night, knowing that."

Hilton appeared in a news conference on Capitol Hill Wednesday to discuss legislation around congregate care.

"The multibillion-dollar troubled-teen industry has been able to mislead parents, school districts, child welfare agencies and juvenile justice systems for decades," she said. "The reason is a systemwide lack of transparency and accountability. It's clear that the state-by-state patchwork of limited, weak oversight and inconsistent licensing requirements is not working. Federal law and funding are desperately needed to bring real reform and true accountability to congregate care in America." 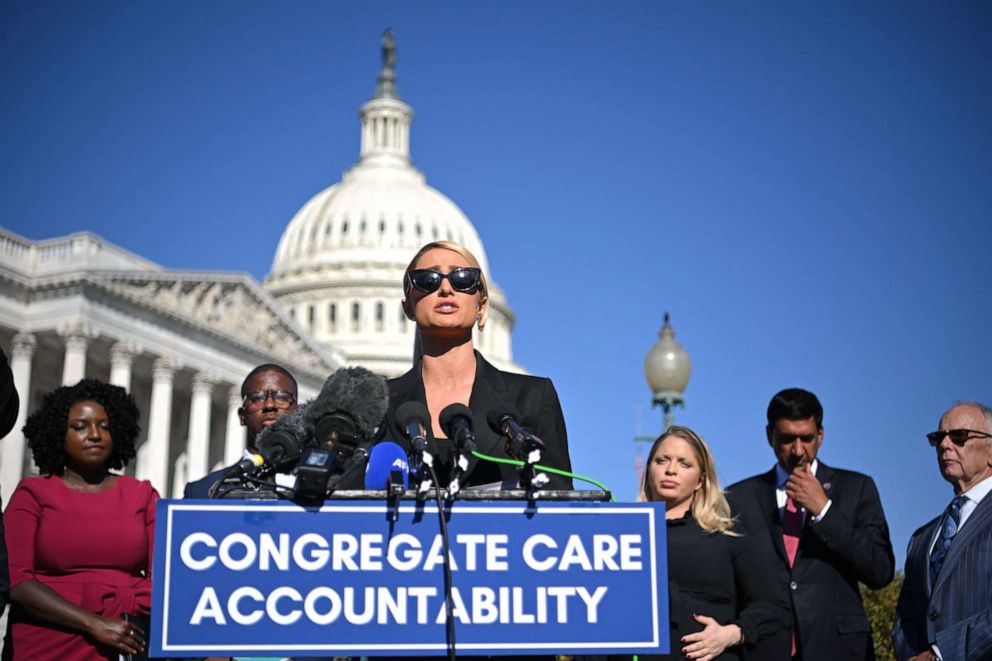 Mandel Ngan/AFP via Getty Images
Paris Hilton speaks alongside congressional lawmakers during a press conference on legislation to establish a bill of rights to protect children placed in congregate care facilities, at the US Capitol in Washington on Oct., 20, 2021. Congregate care facilities include group homes, foster care, residential treatment facilities, maternity homes, and emergency shelters.

Hilton is working with Breaking Code Silence, a nonprofit dedicated to increasing awareness of the "troubled teen industry," to enact change. They are pushing for the passage of the Accountability for Congregate Care Act, which would create accountability requirements for facilities such as Provo Canyon.

"I am confident that this bill will create a world where all youth have the support and opportunity they need to heal, rise and not just survive," she said about the Accountability for Congregate Care Act during the news conference.

"This bill of rights provides protections that I wasn't afforded, like access to education, to the outdoors, freedom from abusive treatment and even the basic right to speak and move freely," she said. "If I had these rights and could've exercised them, I would have been saved from over 20 years of trauma and severe PTSD."

Hilton was 17 years old when her parents, Kathy and Rick Hilton, sent her to Provo Canyon School as a last-ditch effort to curb her increasingly rebellious behavior. Under the impression that Provo Canyon was a boarding school for troubled teenagers, Kathy and Rick were "manipulated and lied to" the entire time, Hilton alleges.

"They had no idea 'cause who would ever think that these type of things are happening behind closed doors? And I feel these places have gotten away with it for so long because that's what they do," Hilton told "GMA." "They'll the parents, 'Your kid's gonna lie to you. Don't believe them. They're manipulating you. They wanna go home.' Then they tell the kids, 'You are not allowed to tell your family anything. If you do, we will make sure you don't use the phone. You will get beaten, strangled, locked in a restraining room.'"

"While you're in there, you are just basically trained to not say anything. So I think when kids get out of there, they just don't wanna talk about it," she continued. "They don't want anyone even knowing, just like myself."

When reached for comment, a representative for Provo Canyon School referred "GMA" to a media statement issued in August: "Provo Canyon School was sold by its previous ownership in August 2000. We therefore cannot comment on the operations or student experience prior to that time."

"While we acknowledge there are individuals over the many years who believe they were not helped by the program, we are heartened by the many stories former residents share about how their stay was a pivot point in improving – and in many cases, saving – their lives," the statement reads, in part. "Provo Canyon School is committed to the safety of our students and staff. Provo Canyon School DOES NOT use 'solitary confinement' as a form of intervention. Licensed physicians prescribe medication as necessary to assist residents in addressing their mental health related diagnoses. The students and their families are informed of changes to prescription medications and participate in decision-making about medications. Provo Canyon School physicians DO NOT prescribe or use any medication as a means of discipline."

For years, Hilton, now 40, never spoke of her experiences. However, when she began filming her 2020 documentary, "This is Paris," she revealed a few details to director Alexandra Dean, who encouraged her to discuss it on camera. When she did, she said the nightmares that plagued her for years stopped.

"There needs to be oversight, regulations, accountability, transparency. People need to know what's happening, and people need to be held accountable for what they're doing," Hilton said about necessary changes she hopes to see.

"I wish we had this bill back when I was a teenager and maybe I wouldn't have been suffering from trauma and PTSD my entire life because of it," she noted on the Accountability for Congregate Care Act. "I wanna save other people from having to go through that."

This type of advocacy work has been cathartic, Hilton said. Calling it "the most rewarding and empowering experience I've ever felt in my life," she said that she hopes her work with Breaking Code Silence will be her legacy. Her message to the people she says hurt her? "The children that you abuse today will take you down tomorrow."

"Turning pain into purpose is such a real thing," she said. "I just know that the little girl in me would be so proud of the woman I am today."