"Raya and the Last Dragon" hits Disney+ and theaters on Friday.

Raya is on a journey to save the world of Kumandra, a fantasy land where humans and dragons once lived peacefully with one another. The dragons sacrificed themselves for the humans when an evil force, known as the Druun, appeared. Five hundred years later, the Druun is back, so the warrior Raya embarks on a journey to locate the last dragon in order to save humanity.

MORE: Kelly Marie Tran on being cast as Disney's 1st Southeast Asian princess: 'It feels like a crazy dream'

@2020 Disney
As an evil force threatens the kingdom of Kumandra, it is up to warrior Raya and her trusty steed Tuk Tuk, to leave their Heart Lands home and track down the last dragon to help stop the villainous Druun. “Raya and the Last Dragon” takes us on an exciting, epic journey to the fantasy world of Kumandra, where humans and dragons lived together long ago in harmony.

"It's wild to be part of this thing that is so much bigger than me -- that has so much legacy behind it," she shared during an appearance on "Good Morning America" last month.

The actress is making history as the first actress of Southeast Asian descent to lead a Disney animated movie.

Award-winning actress Awkwafina, known for her roles in "The Farewell" and "Crazy Rich Asians," voices Sisu, the last dragon, in the animated film.

She said that "Raya and the Last Dragon" is at its core about "unity" and "trust." 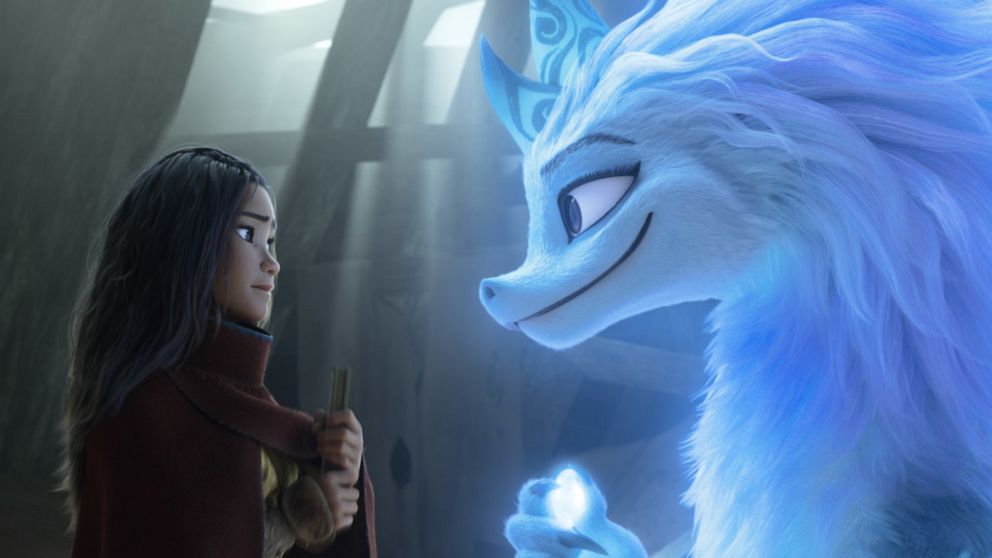 @2020 Disney
Raya seeks the help of the legendary dragon Sisu. “Raya and the Last Dragon” takes us on an exciting, epic journey to the fantasy world of Kumandra, where humans and dragons lived together long ago in harmony.

"When I first got pitched this film, I really had never seen anything like it," she said during an appearance on "GMA" last month. "The fact that it centers around Disney's first Southeast Asian princess, played by Kelly Marie Tran -- I thought that was such an awesome thing and, of course, to be Sisu is an honor."

MORE: Stars of Disney's 'Raya and the Last Dragon' react to the new trailer

LIVE ON @GMA: @awkwafina talks about her new @disneyplus movie, "Raya and the Last Dragon."#DisneyPlushttps://t.co/B63YziHbl4 pic.twitter.com/uuhE6uvt9q

@2020 Disney
Young Raya looks up to her beloved father Benja, Chief of the Heart Lands. “Raya and the Last Dragon” takes us on an exciting, epic journey to the fantasy world of Kumandra, where humans and dragons lived together long ago in harmony.

How to stream 'Raya and the Last Dragon' on Disney+: Anyone with Premier Access on Disney+ can access the movie on March 5, the same day it hits theaters. Premier Access allows users to watch the film as many times as they would like and is available for $29.99 with a Disney+ subscription. The Premier Access offer will be available until May 4th, 2021 at 11:59 p.m. PT, and the film will be available to all Disney+ subscribers on June 4th, 2021, for no additional cost. For those who still have yet to sign up, a subscription to Disney+ costs $6.99 per month or $69.99 per year. There is also a bundle option that features Disney+, ESPN+ and Hulu for $12.99 per month.

2:28
Kelly Marie Tran, Awkwafina and filmmakers share what inspired the story and characters behind their latest film from Walt Disney Animation Studios.