Prince Harry and Prince William's relationship takes center stage in a new book out this week.

In "Battle of Brothers," royal historian Robert Lacey reveals fresh details from Prince Harry's departure from the royal family and paints a picture of the two young men struggling with the demons of their past, the public breakdown of their parents' marriage, the death of their mother, the demands of duty and the diverging roles they must fulfill.

"This story goes right back to when they were children," Lacey told "Good Morning America" in an exclusive interview. "And at the age of 6, 7, William suddenly starts becoming more serious. He's aware of his destiny as a king. Harry goes in the opposite direction."

According to Lacey, Harry realizes at the age of 4 how different his path will be to that of his brother, "There's a story of how he was misbehaving in the back of a car at the age of 4 and his nanny tells him off. And he says, 'I don't have to behave. I'm not going to be king,'" said Lacey.

But while he was not in line to be king, he nonetheless had a role to play.

"Harry came to realize in his teens that he was typecast as the court jester, the number two," said Lacey. "There's William, standing for duty going ahead down the conventional path. And it's Harry who strikes out for love, for self-determination."

"Battle of Brothers" goes back to the root of the current well-known rift between the two princes, and shows that, as Lacey explains in his interview, "The British royal system can be very cruel, and it's particularly cruel to the spare." 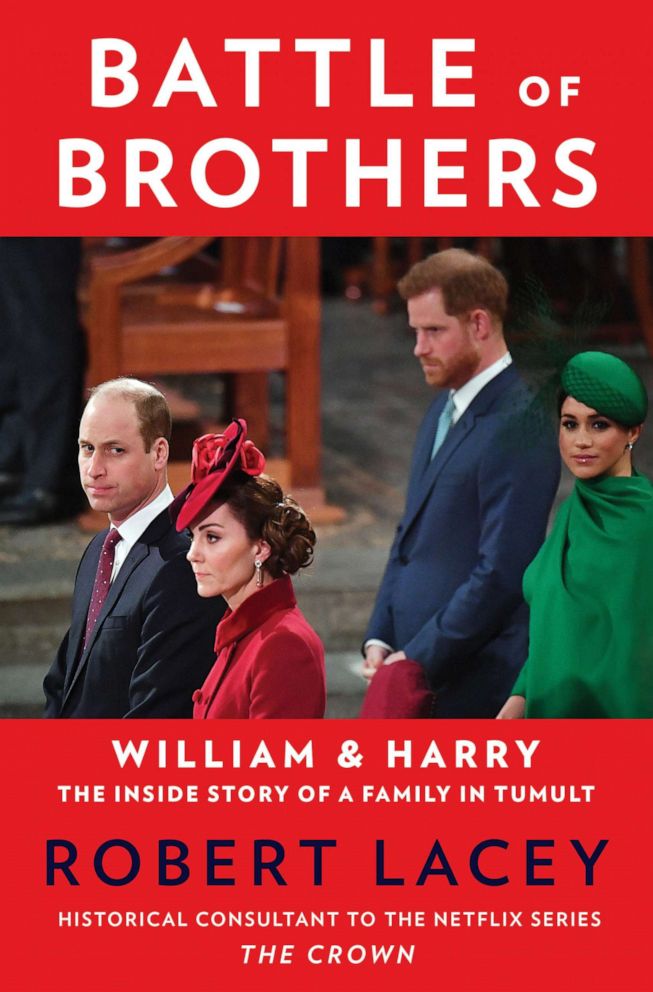 "This is not the first time we've had spare problems, the heir and the spare, Princess Margaret, Prince Andrew. Now, Harry is in the same dilemma," said Lacey. "They start off in the public eye as playmates, as co-stars with the heir. And what's their destiny? To be pushed down the line of succession as babies come along, marriages come along. There was trouble with Margaret. There was trouble with Andrew. And now we have the same thing with Harry."

Lacey contends in the book that Harry was growing increasingly unhappy in his role as second to William, and when he met Meghan Markle -- now the Duchess of Sussex -- he saw his opportunity to break free.

"He falls in love with this megawatt woman. He's inspired. He's transformed by her, not really changed, but the ideas and tensions that have been inside him get resolved. And he wants more than that. And the palace couldn't handle it," said Lacey.

According to Lacey, Harry and Meghan became the "rock stars" of the royal family and the institution did not know how to harness this star power.

"I think Meghan's a force of nature that maybe Buckingham Palace hasn't worked out how to cope with. She is a woman of great conviction," said Lacey.

The royal historian wonders in the book whether the British royal family was ready for such a strong personality and was perhaps incapable of adapting to the modern views that Meghan brought with her, like women's liberation and social change. In fact, Lacey said, "There's a clique down there in Buckingham Palace, I think, frankly, who've got it in for Meghan."

But Meghan's forthrightness wasn't the only problem, according to the "Battle of Brothers" author. Courtiers were concerned that the couple were in danger of eclipsing the more senior royals.

"They were these mega rock stars who, frankly, for the first couple of years, overshadowed William and Kate," said Lacey who explained that palace aides had decided that the Duke and Duchess of Sussex had to somehow "be edged out."

One way this message came across was at the queen's Christmas address, said Lacey.

"The previous year, there'd been a lovely photograph of Meghan and Harry. This year, no photograph," said Lacey. "The queen doesn't mention their name. And although she says she's welcomed this year her eighth great grandchild, she doesn't mention the name of Archie. The message here is very clear. These people are in the second rank. And the people who matter are, look, myself, the queen, Charles, William, and little Prince George."

The other message came shortly after, with the commissioning of a series of official portraits of Queen Elizabeth with Prince Charles, Prince William and Prince George.

"A picture is issued of the four monarchs of the present and the future. And I think the underlying message of that is, 'Just remember your place, Harry and Meghan. These are the people that really matter in the royal family. And you are the backup. And you're trying to play too prominent a role,'" said Lacey.

The royal historian pointed out that when it came time to hold a meeting with the rest of his family about his and Meghan's future within the royal family, Harry was already feeling embattled.

"William and Charles, in particular -- they were offhand -- 'Put it down in writing, old chap' -- You know?" said Lacey. "I don't think they took them seriously. And they kept saying, 'Give us something in writing.'"Lacey explained that Harry was reluctant to do so, as he didn't trust palace aides not to leak his thoughts to the press -- which then happened when The Sun newspaper published an outline of the couple's plans to leave the U.K. and possibly settle in Canada.

This prompted Harry and Meghan to launch the Sussex Royal website, which Lacey says was created out of frustration. The couple gave very little warning to the family before publicly publishing their plans.

By now, according to Lacey, the battle lines between the brothers had been firmly drawn. He explains that Queen Elizabeth proposed a family lunch before the royal family and their aides held calls a meeting to discuss Harry and Meghan’s future -- the so-called Sandringham Summit.

"And William said, 'No.' This was extraordinary. Harry said, 'Yes.' Charles said, 'Yes.' William actually said, 'No.' Friends apparently said that he felt he couldn't keep his temper, or he didn't want to sit with Harry. He said, 'I'll sit down for negotiations. I'm not going to sit at the same table,'" Lacey said.

"And that, I think, is the real moment when you can say the breach became definitive. From then, it was really downhill with negotiations going on, and with a very punitive palace attitude towards Harry. The royal family feeling was that, 'Harry's broken the rules. He should've kept these things confidential till we'd all discussed them.' Harry's view was, 'I did my best, for goodness sake. And you're the people who actually let it slip out. And, so, if that's going to be your way of behaving, I'm going do the same,'" Lacey continued.

Lacey argues in the book that not only was the Sussexes' departure from royal life badly handled, but so was Meghan's introduction.

But Lacey said the palace is "still pretty conventional in its thinking."

"It's still male-dominated," said Lacey. "A young, independent woman coming in with her own ideas, they're not used to that."

Meghan's departure from the royal ranks, Lacey said, could well have a long-lasting effect on the monarchy. "This mixed-race recruit and her mixed-race son are out of the family. It was such a missed opportunity. It's not surprising that a country like Barbados recently said, 'Well, we'll sign off. We don't need a white head of state anymore,'" Lacey said.

"We are proud that our monarchy heads a mixed-race Commonwealth. To have first welcomed in, and then in some way lost control of, lost fellowship with your star mixed race recruit, that's a big mistake," Lacey said.

So, will we see a rapprochement between the princes any time soon?

"I think we're looking at the future to, sadly, to some sort of bipolar monarchy, unless William -- and I think the onus does lie on William -- to reach out and try and affect some either genuine reconciliation or genuine acknowledgment that their paths must part," Lacey said.

The two brothers were due to have met at the queen's official birthday in June, but the pandemic did not allow it. However, Lacey said there is major meeting for the brothers set to next year.

"We've got a very big date coming up next year, the 1st of July, the 60th anniversary of Diana's birth," Lacey said. "And both boys have already committed to be in London at the same time, presumably with their wives, for the unveiling of a statue to Diana."

All eyes will be on this pair of princes, Lacey said. 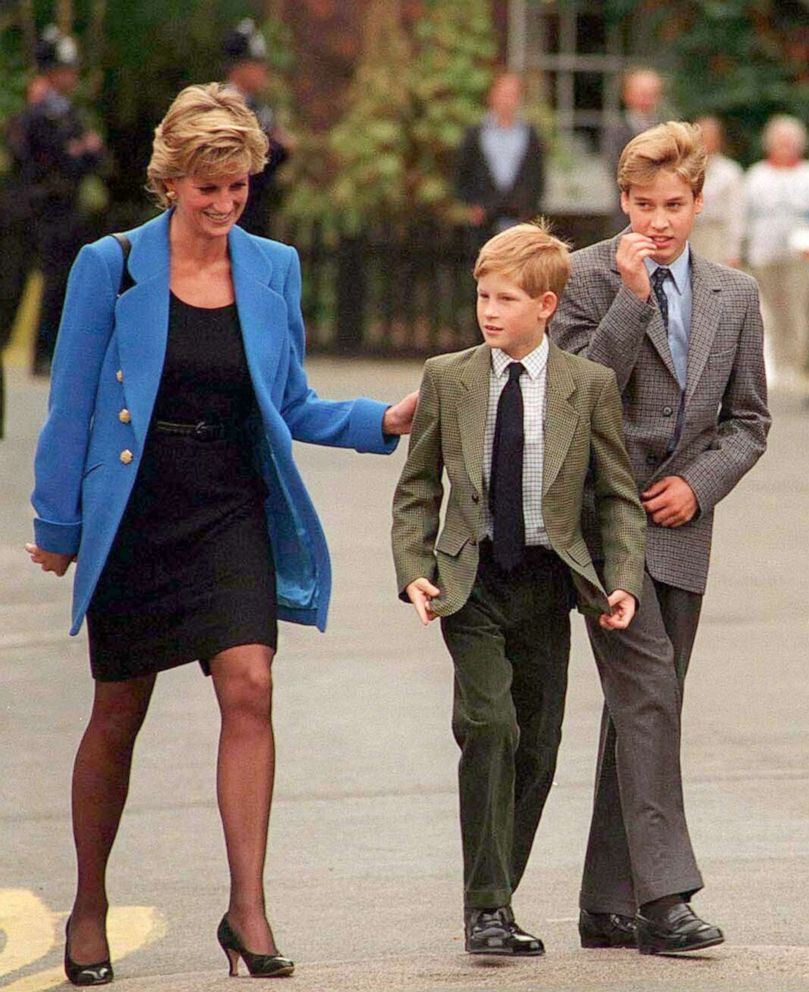 "I'm sure the whole world will be looking at these two boys who are there together, and will want to know, 'Well, is this genuine? Are they putting on an act?'" Lacey said. "As a sentimental Brit, and, like I think most Brits, we'd all love the brothers to come back and embrace each other."

On the last page of the book, Lacey writes, "What would happen if Diana came back to life, and had some advice to give these boys?" In his mind, he writes, she would say, "Time for the social distancing to end, boys... talk to each other."