Newcomer Jo Ellen Pellman will make her feature film debut in the lead role. She plays Emma, a high school student in Indiana who is banned by the head of the PTA from attending the prom with her girlfriend, Alyssa (played by Ariana DeBose). 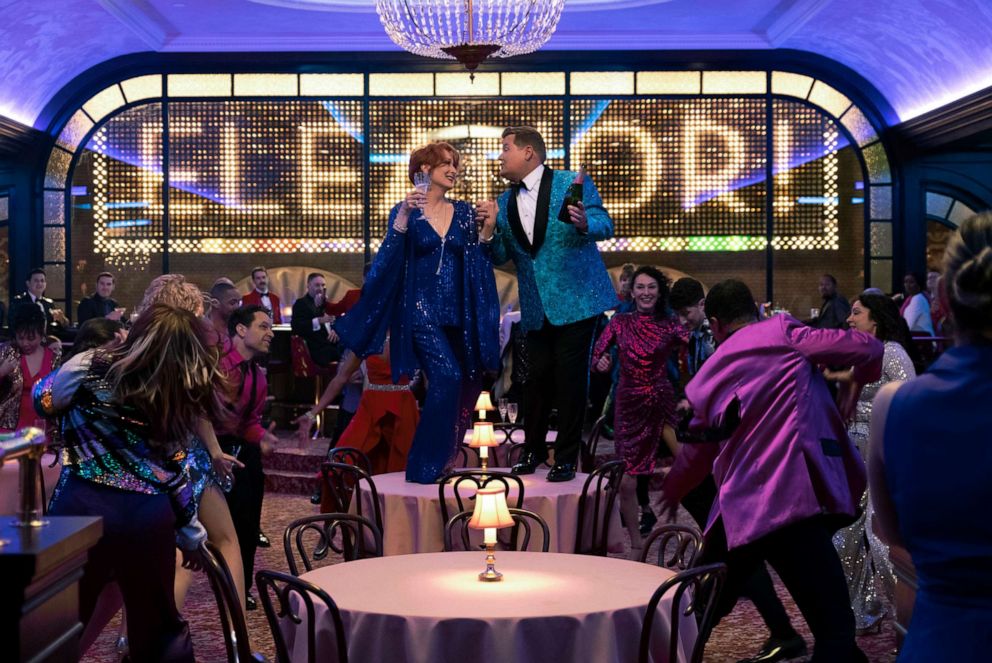 The film is based on the Broadway musical of the same title by Matthew Sklar, Bob Martin and Chad Beguelin. The show first premiered at the Alliance Theatre in Atlanta in 2016 before making it to Broadway, where it ran from November 2018 to August 2019 at the Longacre Theatre.

Here’s what you need to know about the film before it hits select theaters and Netflix this December:

1. Murphy says Jo Ellen Pellman and Ariana DeBose are ‘the perfect ambassadors to tell this story’

In an Instagram post shared on Nov. 30, the director described Pellman and DeBose as "the beating heart of the movie."

"They are both out and proud queer young women who saw THE PROM on Broadway and were so moved by the LGTBQ love story told with joy and optimism," he wrote of the female leads. 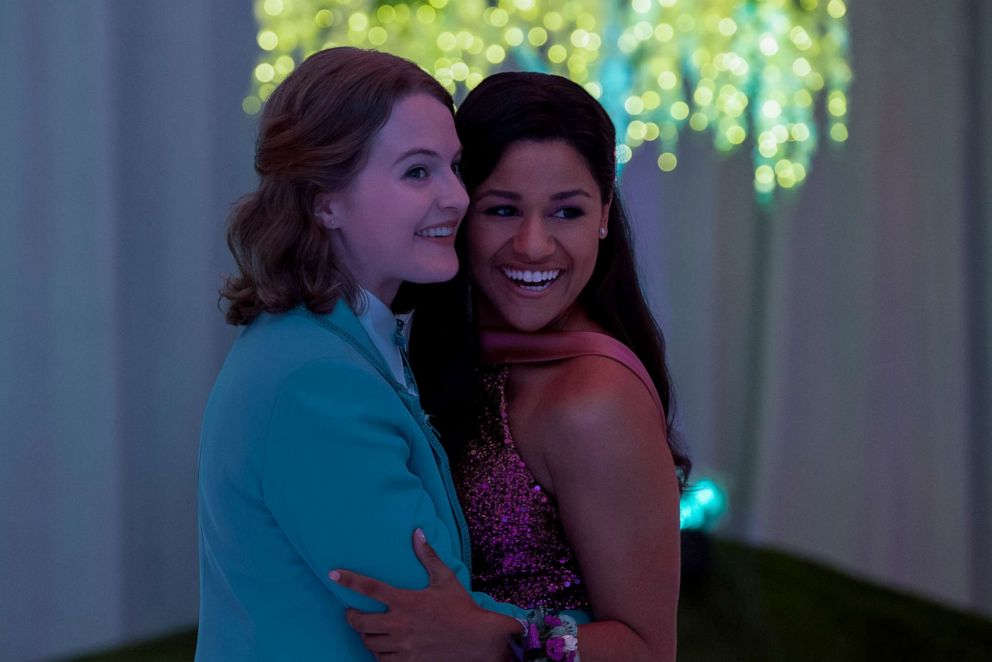 Pellman, who hails from Cincinnati, is a new face in the industry. She graduated from the University of Michigan with a degree in musical theater and a minor in creative writing. During her time at the university, she starred in several university productions.

She has also appeared in several television shows, including "The Deuce," "The Marvelous Mrs. Maisel" and "Alternatino with Arturo Castro."

In Pellman's announcement that she'd landed the role, she expressed her gratitude to the director and her castmates.

"To this team that has welcomed me with open arms, to Ryan for trusting this lil queer actor from Ohio with the role of a lifetime, to my team in New York cheering me on, and to my mom, for believing in me when I was just learning to believe in myself: thank you," she wrote.

DeBose has appeared in "The Donna Summer Musical," "A Bronx Tale," "Hamilton" and more. She will also appear in Steven Spielberg's upcoming "West Side Story" adaptation.

She told Total Film magazine that her role in "The Prom" is "very important" to her. "I saw the Broadway show three times. I am queer ... it was a perfect storm of circumstances that led me to this place," she said.

During an appearance on "Good Morning America" on Wednesday, DeBose shared that she went to her own senior prom with her best friend, Jonathan.

"I had a crush on this girl and she came up and asked me to dance and John was like, 'Go, go dance with her,' so I did," she said. "And it was the first time that I had realized that people would start to stare at you for being different and didn't like it. So I grooved my way back to the punch bowl, and that was my first experience with that type of interaction."

"But cut to making 'The Prom' and I had the opportunity to have this completely full circle celebratory moment where two girls got to dance together and be cheered for," she added. "It was amazing."

She said her favorite moment of shooting the film was making the final prom scene.

"It was a huge celebration, and it was so inclusive," she shared. "So many beautiful people that identified all over our rainbow spectrum and it was just -- the energy was palpable."

Meryl Streep's character, Dee Dee Allen, and James Corden's character, Barry Glickman, are two actors looking to reinvigorate their careers after their new Broadway show turns out to be a failure.

The duo travel with fellow performers, Angie (played by Nicole Kidman) and Trent (played by Andrew Rannells), to Indiana to help fight for Emma's right to go to the prom -- in hopes of bringing attention to their own careers. 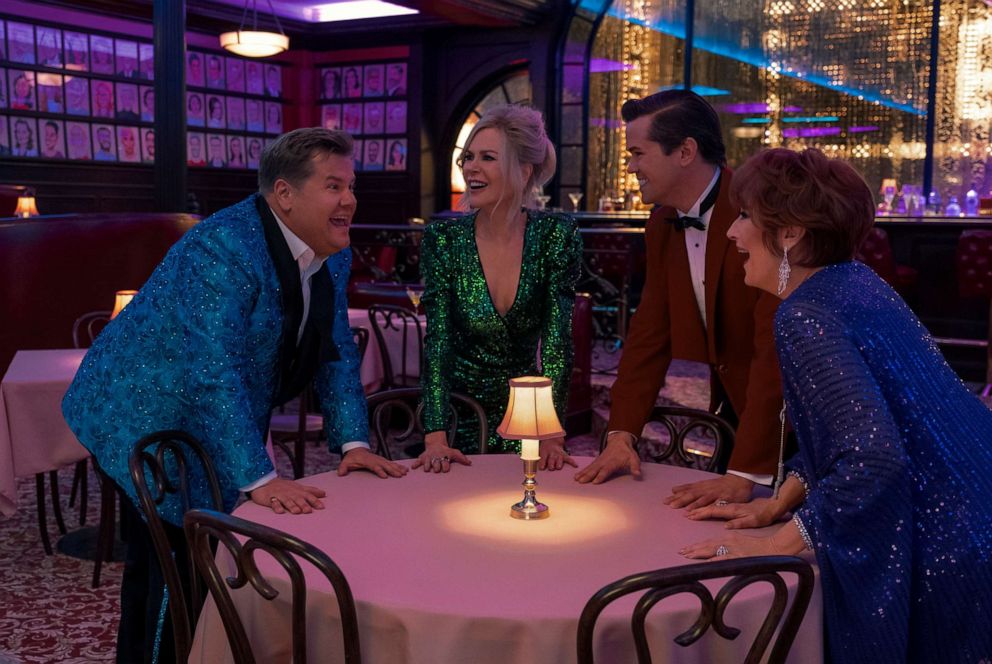 In the full trailer for the film, released Nov. 26, we see the foursome travel to Indiana to put on their own prom for Emma and go to bat for the high school student against the head of the PTA, played by Kerry Washington.

Streep and Corden spoke to "Good Morning America" about what starring in the film meant to them.

"It was based on a true story, something that really did happen to a young girl who was not allowed to bring her girlfriend to the prom, and I think people have evolved largely on this subject but there's always room for improvement," Streep said in an interview that aired Thursday. "It's a personal story, but it's one that kids go through everywhere, not just in the middle of the country,"

"I have friends of mine who are still yet to come out to their families for fear of how that would be received," Corden added. "I think this is a story that tells all of those people that there is hope and there is a world out there that offers acceptance and doesn't care who you love."

He also spoke about what it was like performing alongside his talented castmates.

"Those things, that joy -- the joy of the film is really the beating heart of all of it, how it starts, how it ends," he added. "We really, really hope it's uplifting to anyone who sees it and it doesn't exclude anybody, all generations of a family can watch and enjoy the film."

3. The storyline of 'The Prom' is personal for Murphy

Murphy said Emma's story is something he is able to connect with.

He said he had to bring one of his girlfriends to the dances instead.

"Every prom I attended, ended in afterparty private tears and a feeling like I truly wasn’t wanted and didn’t belong in this world," he continued. "All I wanted was to be embraced for who I was, and to love whomever I wanted. THE PROM has this idea as its beating heart and that’s why I wanted to make it." 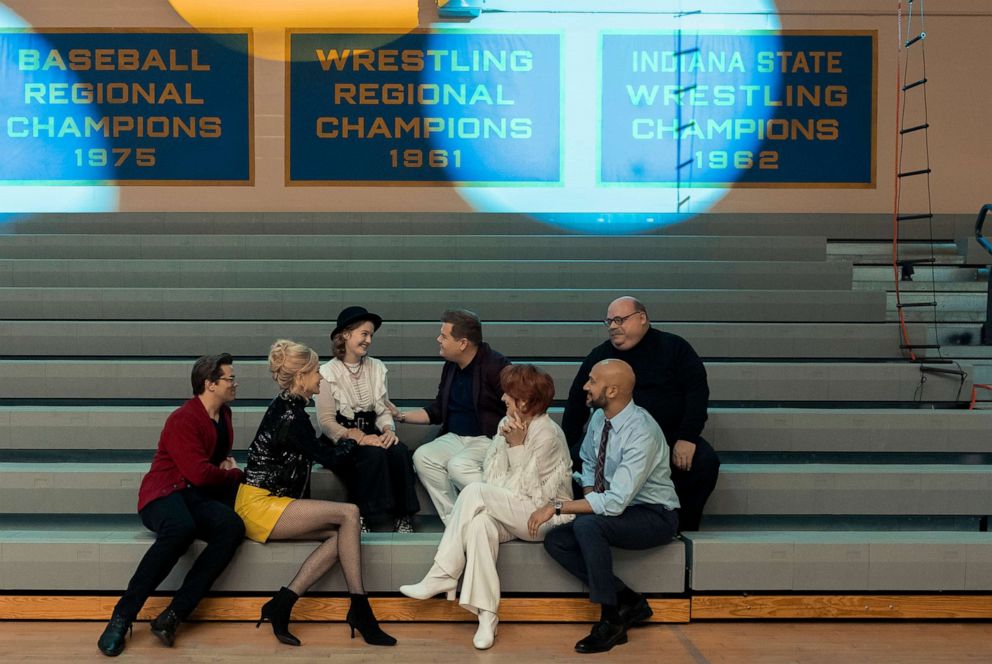 The director said this film is "for anyone who ever felt like an outsider, and for anyone who just wants to be their authentic self -- which I think is a universal concept."

He also added that if he'd had a film like this when he was younger, he might not have "felt so alone."