Tom Brady sat down with Michael Strahan in a new exclusive interview for "Good Morning America" to reflect on winning his seventh career Super Bowl, and the motivation behind his longevity and momentum.

When Brady announced he was leaving New England after 20 years, six NFL titles and four Super Bowl MVP awards to sign with the Tampa Bay Buccaneers, the quarterback faced criticism and doubt. 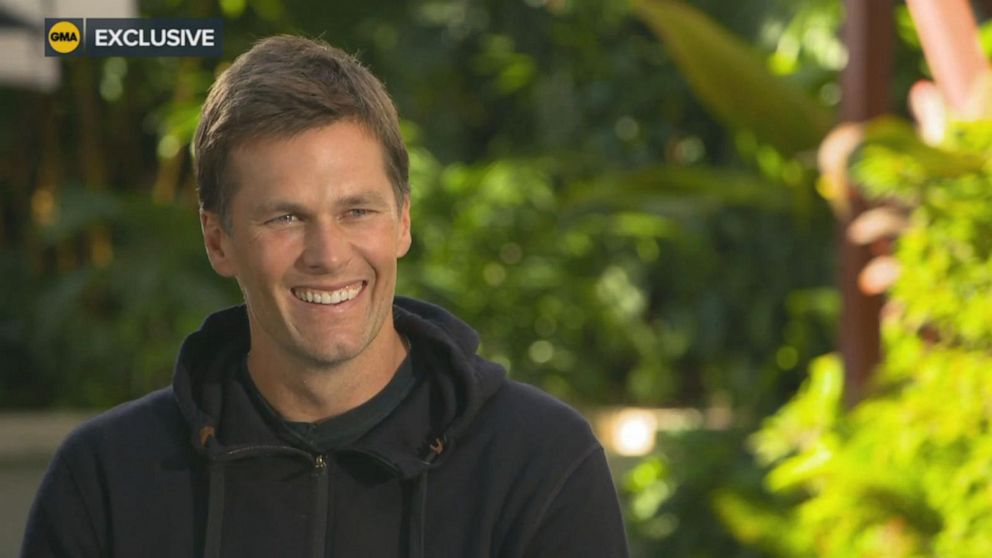 ABCNews.com
VIDEO: Tom Brady addresses those who said he could lead Tampa Bay to the Super Bowl

He continued, "I think that's a great part about football. It's not really about what you did last year, it's kind of what you're going to do this year, so for me, it was what I was going to do for the Bucs last year. I still feel that way."

Earning his first title in his first season with a new team would have been impressive enough, but even more so because it all came together during a pandemic. 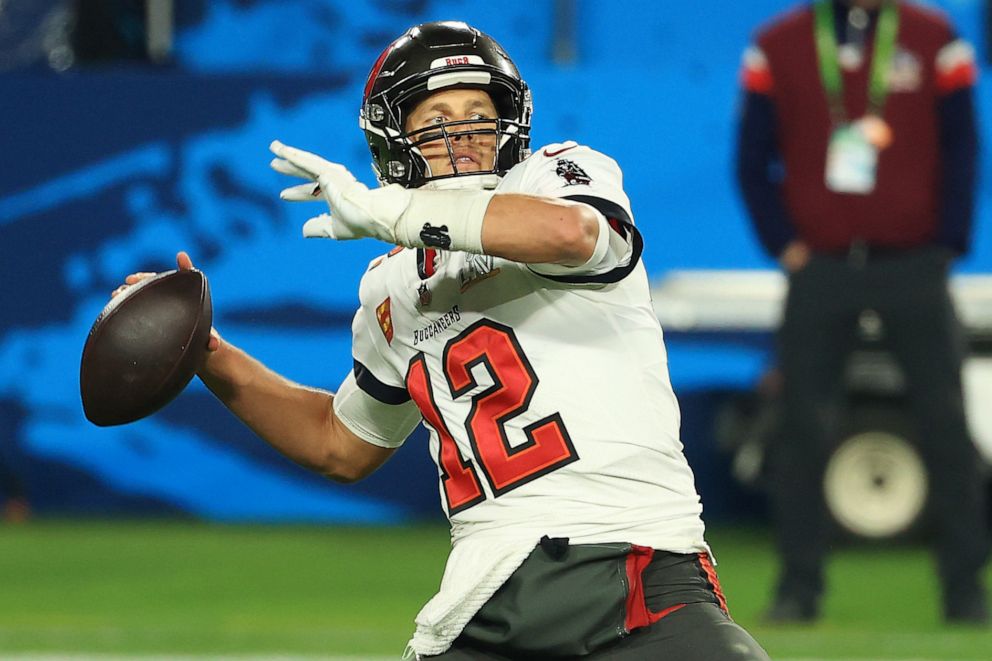 "I think that's a big part of what I understood last year, it's things are gonna be different. I try to work within what's currently happening but still try to do the best I could do," Brady said. "All of it was really -- really amazing, obviously with the way the season ended -- so it was a great year."

For the 43-year-old quarterback, the idea of starting from scratch in Florida after two decades in New England was "in a lot of ways really invigorating."

"You know when you're at the Patriots, everyone would always come to me and introduce themselves to me because I was kind of the mainstay," he said. "But I was the new guy for the first time, you know, and that was a really different experience."

Another big difference for Brady has been his new head coach, Bruce Arians, who is a totally different type of coach than Bill Belichick, he said. 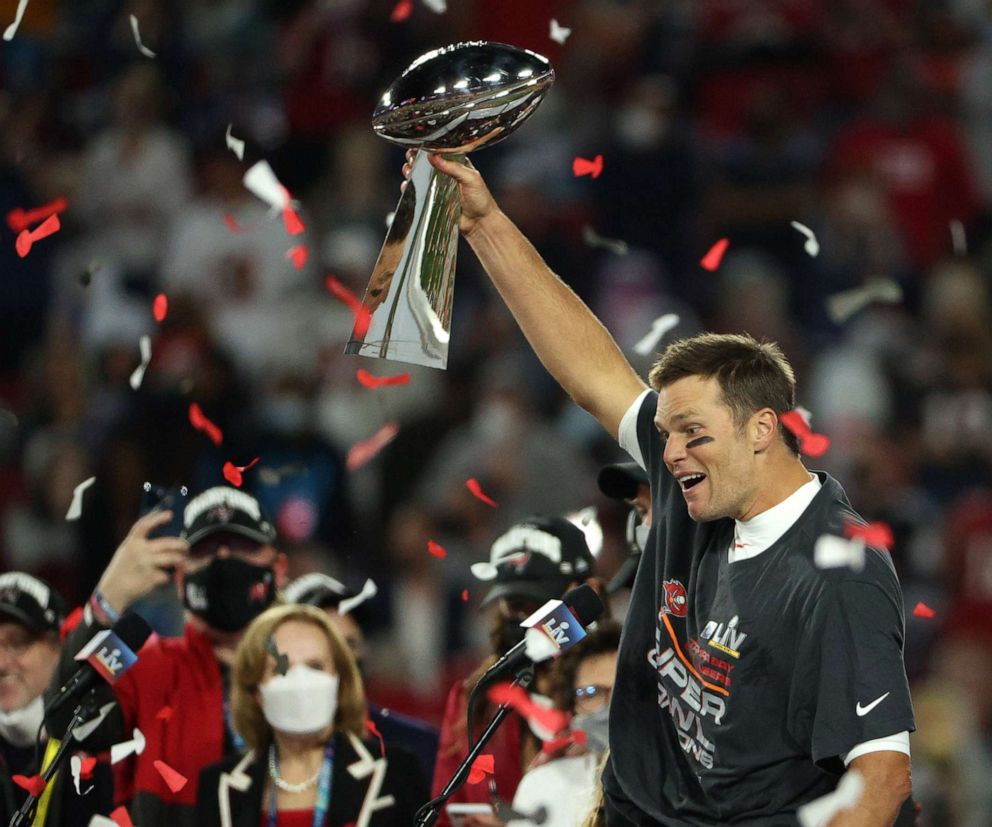 "He's a great motivator -- he's got a great feel for the team -- a great pulse for what's going on in a locker room, great intuition, great evaluation of talent," Brady said. "When you're in one place for 20 years, you think that's the only way, and I think when you go to a different place you realize, 'wow -- there's another way that people do things.'"

One month after his Super Bowl win over Kansas City, Brady broke another record off the field when his rookie card sold for $2.25 million, edging out the previous record of Chiefs quarterback Patrick Mahomes, whose card sold in early February for $861,000.

"It's surreal and it makes me want to go check all my cards that I have stored again; there's got to be one [more] in there somewhere," Brady said. "I kept all these cards for all these years."

When he was first coming up in the league trying to make some money, he said, "my agent, Steve, was like ['I've] got a trading card deal for you. Sign 1000 cards and they're going to pay you like 20 cents a card.' And I was like, '20 cents a card, five, whatever -- I'm gonna be rich. This is unbelievable!'

"And 21 years later, you see these cards that are worth that kind of money. I definitely should have kept some of them -- but whatever I think it all worked out pretty good," he said.

So far in the off-season, Brady has been able to dedicate time with his family.

"We went skiing. We had a little trip there -- we have a place in Costa Rica that we've been to. We were in the Middle East for a week, and then we're here at Disney," he said.

The father of three said he hopes his kids can learn from the hard work that has gone into his success in football and life.

Brady recently celebrated 12 years of marriage with his wife Gisele Bündchen and hailed her for the secret to their success.

In the wake of helping the Bucs bring home the Championship, the Super Bowl LV MVP celebrated with his team in a uniquely Florida way -- with a boat parade.

"From what I remember -- it was really cool," Brady said with a laugh.

The QB was seen in a now-viral video throwing one more pass, but this time from one boat to another with the Lombardi Trophy instead of a football.

"There was not a lot going through my mind at that point," he said. "That was not smart for a couple of reasons. One is if we drop it, that's a little bit of a problem. But the worst thing that could happen is the edges on that trophy are so sharp -- and had those things clipped one of my boys on the other boat, it would have been an ugly, ugly parade."

He continued, "I had a lot of fun, and I don't get to do that -- it's hard to relax and when you're out in public, and there's phones, not that I would do anything but it still doesn't feel like comfortable for me my personality to have people filming. So I tend to just stay at home more and I don't go out a lot."

The superstar quarterback's wife whispered "what more do you have to prove" after the epic win in Tampa Bay, but for Brady it's more about playing the game he loves for as long as he can.

"I don't think proving it for me is the motivation," he explained. "I still want to play, I got like a little sickness in me that just wants to throw a frickin spiral you know what I mean."

He added, "once you stopped you can't go back and do it, I got some more football [in me] I mean not a lot, and I know that, but what I got left, I'm gonna go I'm gonna give everything I got."