Tyler Perry said the two men who disappeared after allegedly being picked up by a Florida sheriff's deputy almost 15 years ago "absolutely deserve" the spotlight the actor and producer has been shining on their cases.

Perry spoke to "Good Morning America" Wednesday about his passion for the cold cases and why he is offering a $200,000 reward for credible information into the whereabouts of Terrance Williams and Felipe Santos.

Williams and Santos disappeared within months of each other almost 15 years ago, after allegedly being picked up by the same former Collier County, Florida deputy, Steven Calkins.

"These men have been gone for a very long time," Perry said of Williams and Santos.

But Perry stressed Wednesday that this is not "a black and white issue" and "not about us against the police." In fact, he said many of the officers currently working at the Collier County Sheriff's Office have been "fantastic" and "want justice" just as much as he does.

"Everything has become about race and party [in this country], this is not a black or white issue, this is about justice," he said. "I want us to get away from everything being black or white."

The Collier County Sheriff's Office told "GMA" in a statement that it is "committed to investigating the disappearances" of these two men and shared the missing persons reports and past investigations their whereabouts.

"We also thank actor and filmmaker Tyler Perry for continuing to raise public awareness about these local cases and keeping them in the national spotlight," the Collier County Sheriff's Office added in its statement.

Perry's appearance on "GMA" comes one day after a press conference in which Perry announced he would be offering a $200,000 reward for information about the two men's disappearances. At the same press conference, Williams' mother, Marcia, and her lawyer, Benjamin Crump, announced they are suing Calkins for the wrongful death of Terrance Williams. 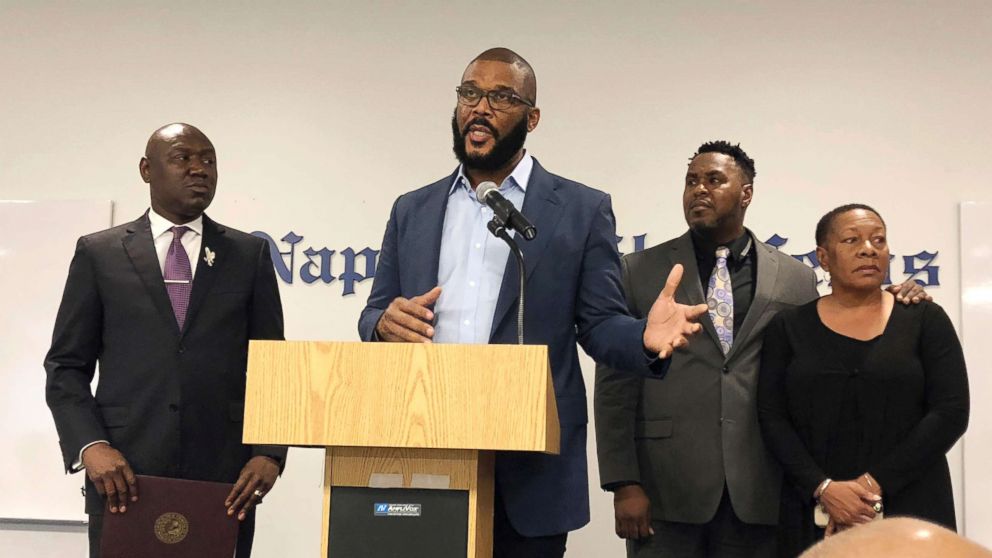 "We're going to see that justice is done, that this deputy pays for what he deserves to get because he took my child ... I'm going to keep on fighting 'til the very end," Marcia Williams said Tuesday during the press conference.

Calkins and his family did not immediately respond to ABC News' multiple requests for comment.

The lawsuit filed Tuesday accuses Calkins of being the last person to see Williams alive on or about Jan. 12, 2004.

According to the lawsuit, Calkins allegedly detained Williams, who was 27 at the time, near a cemetery in Naples, Florida on suspicion of driving with a suspended license.

In the official police report from the incident, Calkins said he dropped Williams off at a nearby gas station that night. A few months earlier, on Oct. 14, 2003, Calkins said he had dropped off Felipe Santos at a gas station following a minor traffic accident. Santos, like Williams, has also not been seen since then, according to the lawsuit.

Calkins was later fired by the Collier County Sheriff's Office when he allegedly stopped cooperating with the investigation, but he has never been charged with a crime.

On Wednesday, Perry said he was inspired to get involved in the cold cases by the "resilience" and dedication Marcia Williams has shown in searching for her son.

"She absolutely wants answers," Perry told "GMA." "I'm blessed and fortunate to stand with her."

In addition to Perry, Crump spoke to "GMA" and explained why the Williams family is filing the civil case now, almost 15 years after the disappearance of Terrance Williams.

"We believe that based on the information that we know now, we'll discover from the civil lawsuit that we're going to be able to put the entire puzzle together as to the disappearances of both Mr. Santos and Mr. Williams," Crump said.

Crump added that the goal is to get Calkins in a civil court of law and have him explain what happened.

"This is a civil wrongful death lawsuit. This is different from a criminal prosecution, which is beyond a reasonable doubt," Crump said. "Civil has a preponderance of evidence -- a reasonable man's standard, what is reasonable, what a reasonable man would believe."