Our "GMA" Book Club pick for February is "The Violin Conspiracy" by Brendan Slocumb.

Slocumb's debut novel is a riveting page-turner about a Black classical musician's desperate quest to recover his lost violin on the eve of the most prestigious musical competition in the world. 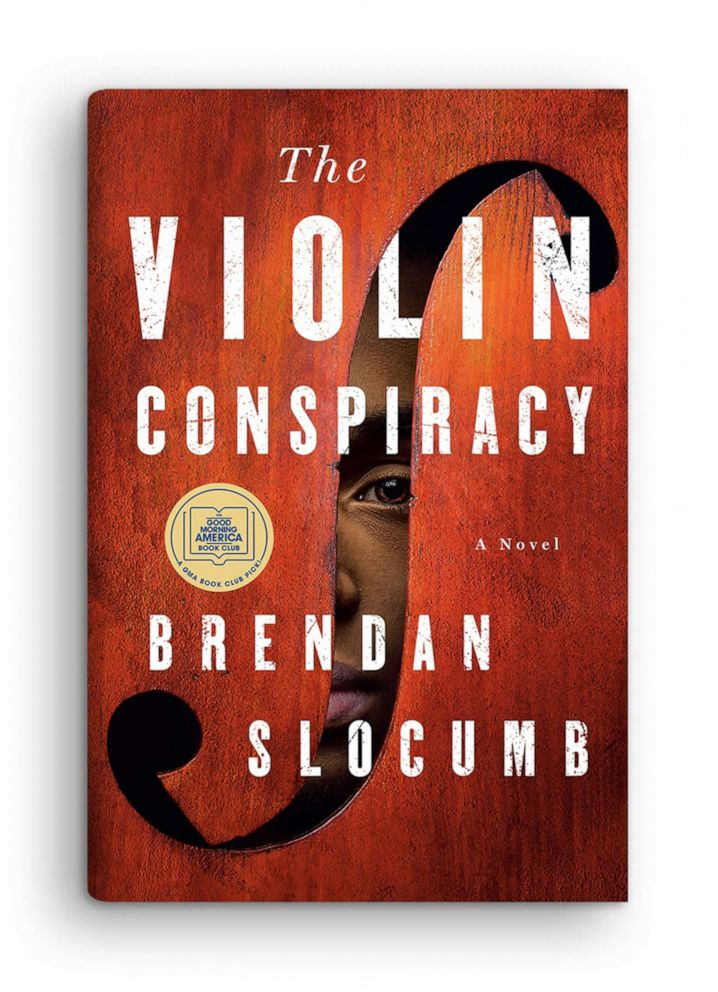 The story follows Ray McMillian, whose dream is to become a world-class professional violinist. When he discovers that his great-great-grandfather's beat-up old fiddle is a priceless Stradivarius, all his dreams suddenly seem within reach.

But on the eve of his renowned and cutthroat Tchaikovsky Competition, the violin is stolen and a ransom note for $5 million is left in its place.

Will Ray find this treasured instrument before it's too late?

"You'll learn a lot about a world you might not have known anything about: classical music," Slocumb told "GMA" about his book. "[And] stories like Ray's happen all the time but rarely have an opportunity to be heard. Now people seem to be more receptive to listen and empathize and gain a new perspective on what it's like for young artists -- especially what Black artists have to go through."

'The Violin Conspiracy' by Brendan Slocumb

Slocumb's debut novel is a riveting page-turner about a Black classical musician's desperate quest to recover his lost violin on the eve of the most prestigious musical competition in the world. 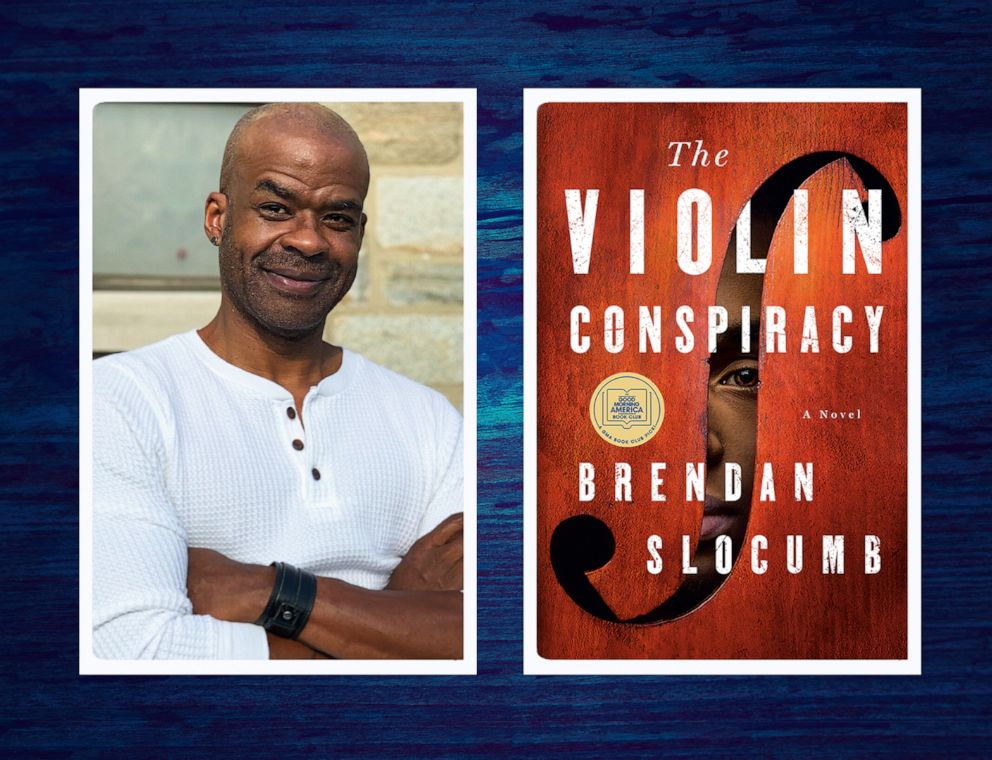 Jacob Fisher smiled when they entered, lifting an off-white case with black leather trim -- a Tonareli fiberglass case, which cost easily $300 -- onto the counter. Ray had never seen a case like that in person before. He pulled it towards him. The case felt empty, as if it were filled with air, or filled with light.

The emerald-colored top cloth folded back, revealing a violin that was at once familiar and utterly, staggeringly, the most beautiful object he'd ever seen. His great great grandfather's fiddle was unrecognizable. The beat-up old body, coated with decades of Good Luck Dust, had been buffed to a deep fiery orange. The cheap plastic tailpiece had become an ornately hand-carved ebony work of art. The bridge was hand crafted and placed perfectly beneath the strings. Every crack, every scar, had vanished. Jacob had taken ebony pegs and ornamented each tip with mother-of-pearl. The back was perfectly polished, the red and orange glowing like sunrise.

Dr. Stevens was smiling more than he'd ever seen her, and her eyes were bright.

"Why don't you play it a little?" Jacob said. "Check out the improvements. See if you can tell the difference."

The sound was unlike anything he'd ever heard before: the notes more resonant, as if reaching into the marrow in his bones. He drew in a shaky breath. He realized he was crying, but couldn't even wipe away his tears. What a gift his grandmother had given him. How would he ever be worthy? Promise me you'll always stay that sweet boy grandma loves so much. He promised her again, right then, that he would keep working twice as hard. To make her proud.

He took another breath, then played the adagio from Mozart's Third Violin Concerto. He'd never felt such joy before: it was as if his heart were in all his fingers, playing.

When at last he drew his bow over the final chords, the room continued to echo.

"No, son, thank you. This was an absolute treasure."

"It's stunning," Dr. Stevens breathed. "May I?" Ray handed it to her. "Were you able to determine the date?"

They talked for a while longer, then Ray paid Jacob -- $1500 and the cost of the new case -- and they left, planning next steps. If this were an Italian 18th century violin, it needed to be authenticated by an expert, and probably insured. Janice now informed Ray that he would be making an appointment in New York City with Mischa Rowland, one of the top Italian violin experts in the country, for Monday morning.

Going through Charlotte's airport security was anxiety-inducing: He'd seen PopPop's fiddle go through the X-ray machine dozens of times, but this was the first he'd watched a $1500 white case cradling a Stradivarius -- his Stradivarius -- float away into the X-ray machine. Being separated even so briefly from the violin now made Ray slightly nauseated. He wondered if this was how the rest of his life would be: glued unceasingly to this violin, forever. Would he take it into the shower with him? He'd be taking it to the Tchaikovsky Competition, that was for sure. He grinned to himself.

Two hours later, the plane banked in for a landing, and there was Manhattan, gleaming in the early morning sunshine like a fairytale city, all glass and gold. It wasn't a real place: It was something out of a movie, like these past few days. He was just a Black kid who didn't want to work at a fried chicken restaurant, and now he was a musician, and there, spread out like a Thanksgiving feast, was New York City. He couldn't believe this was real.

After they landed, though, JFK's grime coating every institutional beige surface jolted him back to reality.

Dr. Stevens -- "Ray, you need to call me Janice now, not 'Dr. Stevens'" -- had planned on an hour to get into the city, and they needed every minute of it, sitting in their taxi in bumper-to-bumper traffic nearly the whole way. Ray couldn't imagine how people did this every morning. At 9:04 their taxi passed Carnegie Hall and a few moments later pulled up in front of a nondescript beige building. "Rowlands Fine Instruments, Sales & Appraisals, Est. 1927" was stenciled in ornate gold lettering across the plate glass window. Inside, a single violin, encased in clear Plexiglas, stood proudly. Their appointment was for 9:00. "Good timing, huh?" Dr. Stevens said.

They had to buzz to be allowed into the main showroom, where a faded violet couch sat against one wall, with a beat-up coffee table strewn with magazines in front of it. Instruments hung from everywhere, including the ceiling: violins, violas and cellos shone with a gorgeous luster like nothing he'd ever seen. These were the instruments of princes and kings, the violins for the best violinists in the world. On the counter rested an old fashioned cash register. No electronics, no card reader. Behind the counter, a staircase carpeted in red damask led up into darkness. On one side of the steps hung an enormous sign, "Employees Only." On the other, "All Others Keep Out!"

The room seemed deserted, but moments after they arrived, a voice boomed from the stairwell, "You have kept me waiting. Your appointment was for nine, and it was a serious inconvenience to fit you in." A very large man descended. "Janice Stevens and Ray McMillian?" the voice said. He was very intimidating. Easily 6'4", with jet-black hair slicked back to reveal a high forehead and bright blue eyes. He did not offer to shake either Ray's or Janice's hand.

"Let me see this instrument."