As the NFL prepares to kick off the regular season, the Washington Football Team made a historic announcement Monday naming Jason Wright the league's first ever Black team president.

The newest addition to the Washington organization joined "Good Morning America" exclusively to discuss the opportunity and his plans for the future of the team. 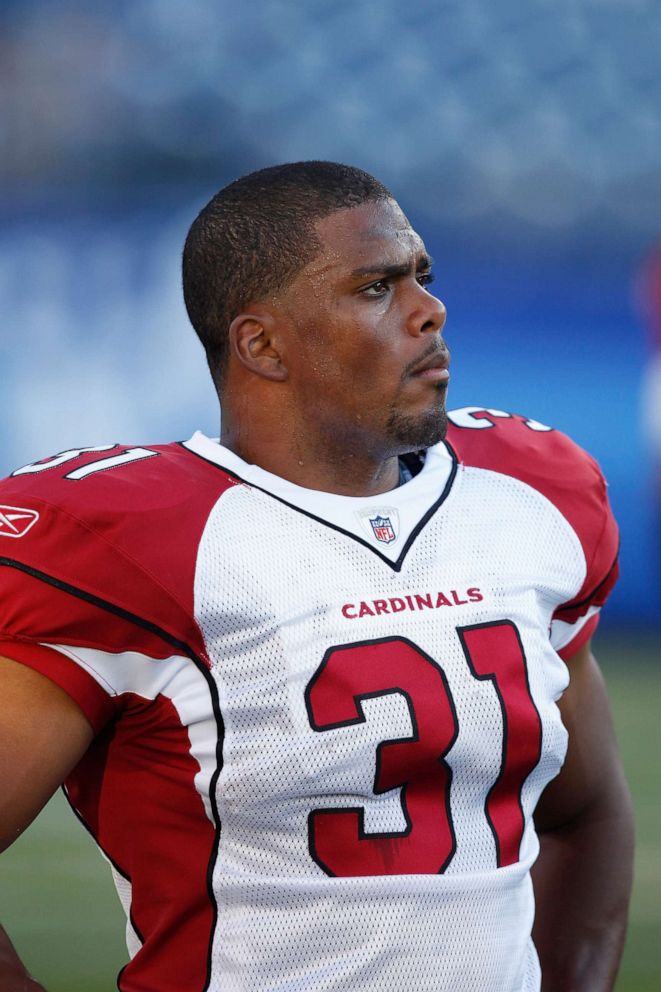 Joe Robbins/Getty Images, FILE
Jason Wright #31 of the Arizona Cardinals looks on during the preseason game against the Tennessee Titans at LP Field on Aug. 23, 2010 in Nashville.

"I think first and foremost it's obviously very personal for me," he said, adding that he has played football since he was seven years old. "[I] played a decent amount of time in the league and then became a businessman and cut my teeth in some of the best business schools. I have been helping some of the most complex and important organizations around the world transform over the last few years, so for me it's personal and an opportunity to bring together my two worlds in a really unique way, at a unique time."

"The fact that I happen to be Black and the most qualified person for this is a boost," Wright said.

Wright also shared his perspective on joining the team amidst turmoil and shared his plans as the new president for making changes from the inside out.

"Part of what excited me about taking this role -- we had a phrase when we played that said, 'you don't talk about it, you be about it,' -- and I think what I've seen from Dan and Tonya Snyder in the hiring of coach Rivera and some of the decisions they've made, to have an independent investigator come in around the sexual harassment allegations, there are actual shifts in action that suggest it's a new day, and that's why I'm excited to take this on," Wright explained.

4:35
20-year-old Morgan Bullock from Richmond Virginia, who is one of few Black Irish dancers she knows of, shares you don&rsquo;t make history &ldquo;by staying inside a box.&rdquo;

"It's a culture transformation first to make sure that we have an organization that people want to be a part of and that itself will start to expand the value of the franchise and make the good things happen," he added.

The new leader joins the franchise after seven years in the league as a running back who was signed by the San Francisco 49ers as an undrafted free agent and played with the Atlanta Falcons, Cleveland Browns and Arizona Cardinals.

Background: Jason Wright spent seven years as an NFL RB; he earned his MBA with high honors from the University of Chicago Booth School of Business. He became a partner for the global strategy and management consulting firm, McKinsey & Company. And now he’s president of the WFT. https://t.co/18msTeBtvt

His responsibilities will include leading the organization’s business divisions, including operations, finance, sales and marketing, the team said Monday.

"The transformation of the Washington Football Team is happening across all aspects of the organization – from football to operations to branding to culture – and will make us a truly modern and aspirational franchise," said Wright in a statement.

At 38, Wright is also currently the youngest team president in the league and the fourth former NFL player to become president of a team. 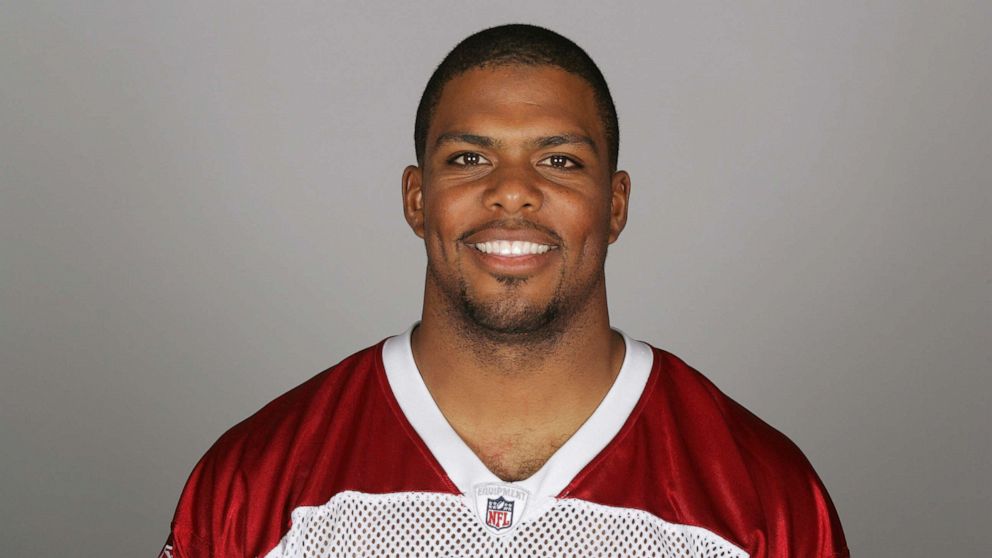 NFL via Getty Images, FILE
Jason Wright of the Arizona Cardinals poses for his NFL headshot circa 2010 in Tempe, Az.

WATCH: I’m a proud Black Irish dancer. Here’s why I see my differences as motivation

4:35
20-year-old Morgan Bullock from Richmond Virginia, who is one of few Black Irish dancers she knows of, shares you don&rsquo;t make history &ldquo;by staying inside a box.&rdquo;
Editor's Picks

During his career in the NFL, Wright was a team captain and NFLPA player representative for the Arizona Cardinals during the 2011 NFL lockout.

He has a B.A. in psychology from Northwestern University, where he was an Academic All-American student-athlete, a two-time All-Big Ten football selection, and the president of Alpha Phi Alpha Fraternity and the Fellowship of Christian Athletes.

He received his M.B.A. in Operations and Finance, with honors, from the University of Chicago Booth School of Business.

“If I could custom design a leader for this important time in our history, it would be Jason. His experience as a former player, coupled with his business acumen, gives him a perspective that is unrivaled in the league," Washington Football Team owner, Dan Snyder, said in a statement.

"We will not rest until we are a championship caliber team, on and off the field. Jason has a proven track record in helping businesses transform culturally, operationally and financially," Snyder said. "He is a proactive and assertive advocate for inclusion of all people and will set new standards for our organization, and for the league. There could not be a better duo than Jason Wright and Coach Ron Rivera as we usher in a new era for Washington Football."

The latest shakeup comes on the heels of the organization's name change and internal investigation into allegations of sexual and verbal harassment as it looks to make a fresh start in the team's new chapter.

The decision comes after months of turmoil for the league's Washington, D.C. franchise under owner Dan Snyder who has faced mounting pressure to sell the team after a series of scandals for the former "Redskins."

Snyder, who once vowed to never change the controversial name was the center of direct backlash amid calls for racial justice, but after sponsors like FedEx, Nike and Pepsi all added to the pressure, the organization eventually renamed the team temporarily ahead of the upcoming season until it decides on a permanent one. 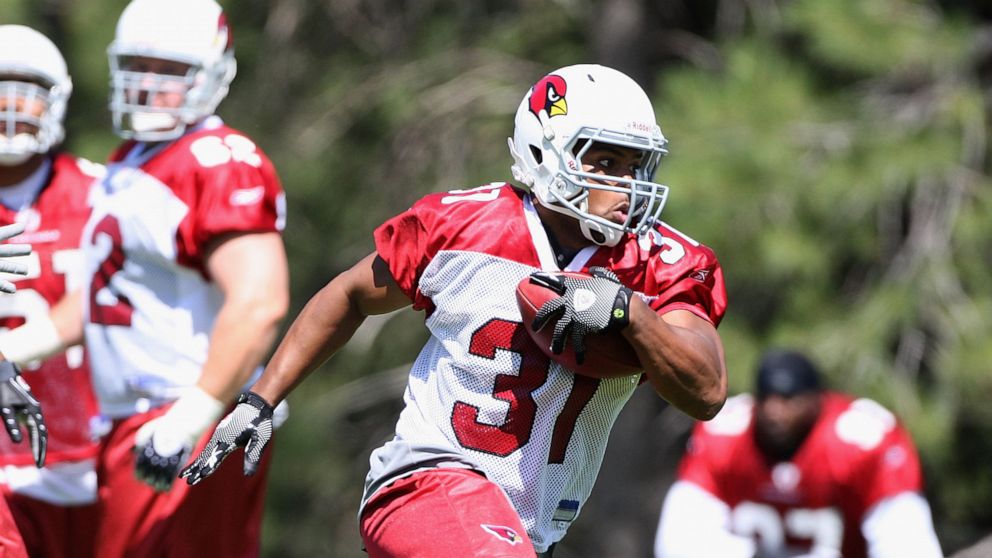 Christian Petersen/Getty Images, FILE
Runningback Jason Wright #31 of the Arizona Cardinals runs with the ball during the team training camp at Northern Arizona University on July 31, 2009 in Flagstaff, Az.

The team is also the subject of an internal investigation amid sexual and verbal harassment allegations made by 15 former employees to the Washington Post.

Multiple top-level employees who stood accused of misconduct are now no longer part of the Washington Football Team organization.

The team's owner said in a statement to the Post that the behavior described, "has no place in our franchise or society" and the team plans to institute "new policies and procedures."

While the new president could not reveal the highly-anticipated new name for the team, he did explain the greater signficance that comes with it.

"In truth what we're actually doing is much more than a new name. It's actually a new identity, a new way of engaging with the world," Wright said. "It's going to inform the way we embed in the community, the way we engage with fans, and so it's much bigger than just a name or logo or whatever you're going to put on the jersey."

He added that "it's going to be a longer process" that will engage fans and sponsors "intensely."

"By the end of this it will be a community decision we make as a Washington Football community and I'm really excited to dive in," he said.

As full contact training camp begins today for players amid the ongoing COVID-19 pandemic, Wright said he is confident in the plans from the NFL.

Wright added that they have to be "data driven" and adjust daily.