WNBA star Candace Parker is outspoken about the women who have influenced her not just on the court, but off it, too.

One of the most prominent of those influences was late college basketball coaching legend Pat Summitt, who Parker played under for four years at the University of Tennessee.

When I signed my letter of intent to play at the University of Tennessee, I didn't realize all I was getting. You have guided me and will continue to guide me EVERY SINGLE DAY! Your legacy IS impactful, your value PRICELESS, your purpose IS endless. Although you have passed on, your teachings and memories live on through us. Therefore there will never be a was, instead an IS. I love you Coach and I've already listened to five of your pregame speeches already..... I miss you so much! Happy Birthday!!

Monday night at the 2019 NBA Awards, Parker honored another strong woman, who was a dear friend of her role model Summit, with the 2019 Sager Strong Award. This award is given to "an individual who has been a trailblazer while exemplifying courage, faith, compassion and grace."

That 2019 honoree and close friend was none other than "Good Morning America" co-anchor, Robin Roberts. 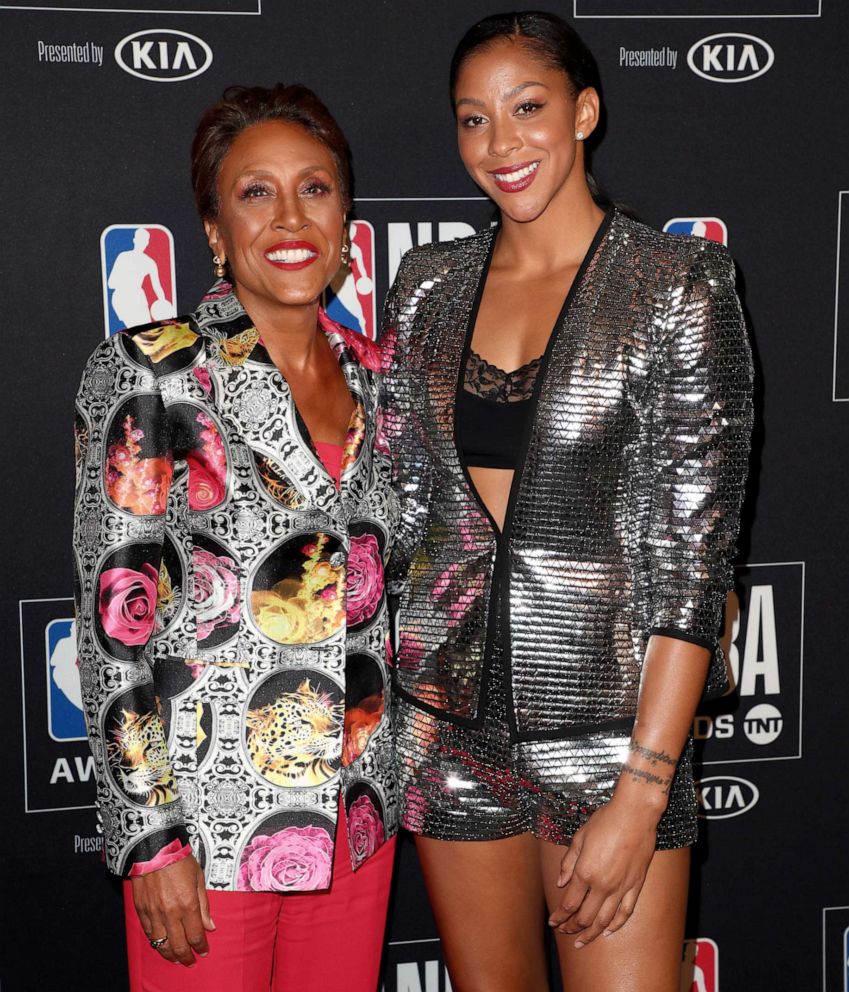 "For four years and beyond Coach Summitt spoke about Robin Roberts in the highest words that you could describe somebody," Parker said. "To be able to present this award to her really means a lot to me and I know it would mean a lot to Coach Summitt."

Since the WNBA wasn't around for most of Parker's childhood, she says she looked up to athletes in other sports who showed her the type of athlete she wished to become.

"Women's soccer, and even the Magnificent Seven gymnasts put women's sports, for my generation, on the map," Parker said. "It was really cool to go out and pretend you were Dominque Dawes or Dominque Moceanu or Mia Hamm."

Now, Parker is quite the influential woman herself. The WNBA star has two NCAA championships, one WNBA championship and two Olympic gold medals under her belt.

Parker broke barriers as the first woman to dunk in an NCAA tournament game and the first player to dunk multiple times in their WNBA career. On top of her success as a basketball player, she has now stepped into the booth as a commentator for Turner.

While the list of Parker's jobs and accomplishments is extensive, her purpose, she said, is being a mother to 10-year-old Lailaa.

11:26 a.m. 5-13-09 Out popped my entire world. I can't believe you are 10! But I can. I can't remember life before you. You are my reason, my everything, my purpose. But I don't have to tell you that I hope I show you everyday. From my tummy, to boob to hip to now holding my hand you have and will be with me every step of the way! I'm so proud of WHO you are! I love you Lai HAPPY BIRTHDAY! P.s. I've written to you since I found out I was pregnant so please check today's journal entry in the future. It's pretty special! Also, sorry I couldn't give you what you want (a brother or sister) for your birthday but I promise sooner or later it'll happen😂😂😂😂

Finding balance with basketball and motherhood

When Parker got pregnant shortly after she became a professional basketball player, she had the same concerns as many working moms. She worried that she would have to sacrifice one for the other, whether it be giving up her love of basketball or giving up being a present mother.

(MORE: For a mother and her 2 daughters at Delta, piloting is a family business)

That's when, she said, Summitt stepped up to help her not only develop as an athlete, but as a mother.

ICYMI you still have time to enter my 2nd annual #CPNomAMom contest! Celebrate all the moms out there by sharing a post with the hashtag #CPNomAMom for a chance to win an @adidas prize pack and @la_sparks tickets to a home or road game!

Parker said finding the balance came from realizing she needed both her love of basketball and love for her daughter for her own happiness.

"We're better when we're happy with ourselves," Parker said. "Everybody has mom guilt. I feel so guilty when I leave my child. But she understands that in order to be the best mom to her I have to be happy. It's OK to continue to make yourself happy."

Working to raise a strong woman

My goal: Give PRESENTS but also be able to be PRESENT. Experiencing life with Lai has been a never ending gift! I know I'm partial.... but dang she's special. ❤️❤️❤️

While her views of happiness have changed since having Lailaa, so has her purpose. Parker said being a strong female athlete is now "greater than me."

As Lailaa grows, Parker hopes to not only be a role model for her daughter herself, but to surround her the with same types of influential women who helped her be the person she is today.

"My daughter has grown up around so many strong, independent, free-thinking women that I don't think she understands the limitations that are put on her. She doesn't feel them," Parker said.

"I want her to keep this little sliver of innocence," she continued. "If you didn't feel that you couldn't do something or someone was limiting you or putting you in a box, imagine the amount of things that you could do."