By Yi-Jin Yu
Video by Brittany Berkowitz
Share —
Sign up for our newsletters to get GMA delivered to your inbox every morning!

When Ali Faruk, a father of two from Richmond, Virginia, took his sons to their local library earlier this month, he noticed a unique computer workstation, and he couldn't resist snapping a photo of what he was seeing -- a wooden desk with an attached playpen area.

"I'm staring at it, and I'm like, this is so brilliant," Faruk told "Good Morning America." "It was just so simple and intuitive, and it's one of those things where you stare at it and you're like, how is this not everywhere?"

Faruk shared the picture on Twitter in late January and in a little over a week, his tweet garnered over 27,000 retweets, 241,000 likes and sparked a debate about paid leave and the state of child care in the United States.

A new public library in my area has these work stations for caregivers with babies! Maybe these are common in other places but Ive never seen anything like this before. pic.twitter.com/svmhWu7QbK

A solution for a Virginia community

The Fairfield Area Library's desk and crib combo, also known as the Fairfield Parent+Child Carrel, is the brainchild of a team led by Henrico County Public Library Director Barbara Weedman, who saw a need in the Fairfield area, which is a predominantly Black community, according to July 2021 census data.

"We've seen parents and caregivers who would need to do adult work, like apply for a job or create a document for community college and so on, and if they had little infants and toddlers, we saw that it was very tricky to do," Weedman explained to "GMA."

"The idea really was for customer service, to provide access. Librarians love to help, and we love to give access to people, and it can be tricky when you have little ones," she said. "And I think this has resonated with many people, because they can relate, juggling all these things in our busy lives." 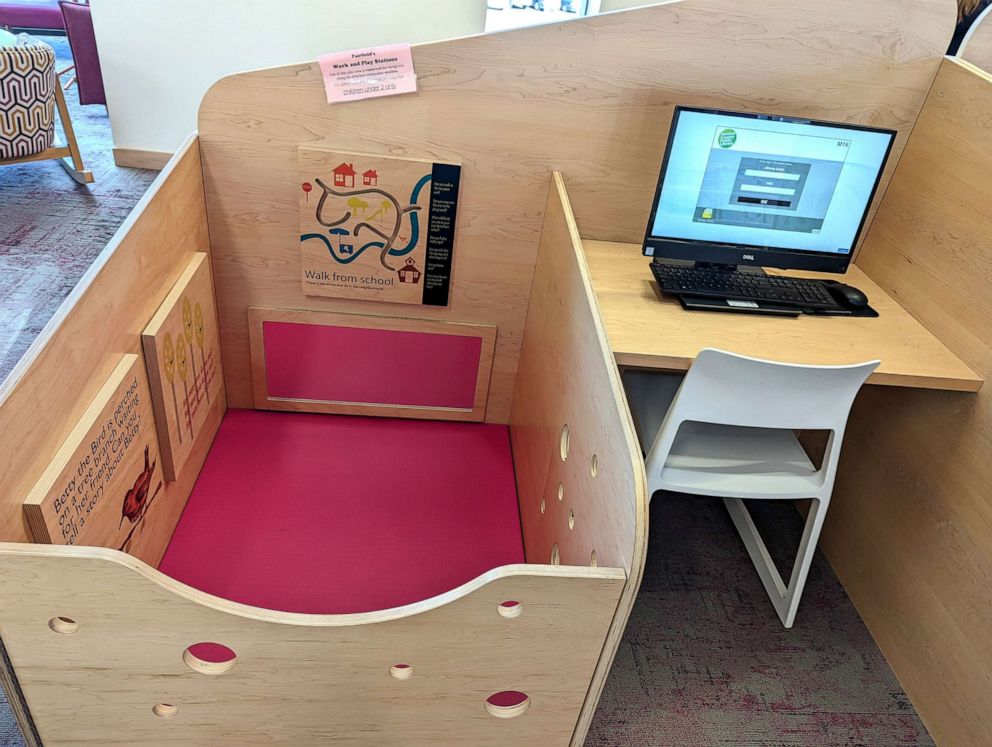 Ali Faruk
A custom carrel at a Virginia library features a play area for babies and toddlers at Henrico County's Fairfield Area Library.

Weedman said the library system gathered feedback from the neighborhood’s residents and came up with the carrel design with the help of Quinn Evans architects and TMC Furniture. Four of the carrels were added to the second floor of Fairfield Library, which moved to its current location and opened to the public in October 2019.

"The community had given us a lot of input, and we wanted that whole floor of the library to be extremely easy for families to use. And the play stations were a pilot idea from having seen that issue for so long," Weedman said.

Janelle Witcher, 35, a mom of four and aspiring entrepreneur, recently brought her 2-year-old son and 1-year-old daughter with her to Fairfield and said she’s thankful for the workstation. "My kids sat in there for about 20 minutes. I had time to get my own business card done and then everything else that I was working on."

But not a solution for America’s child care woes

The work-and-play workstations at Fairfield are primarily intended for kids 2 and under, and though he didn't use it himself since his kids are older, Faruk said he appreciated that it was available for fellow parents and that's why he wanted to tweet about it. His viral tweet has mostly been met with positive responses, but at the same time, coverage of his tweet struck a negative chord as well. 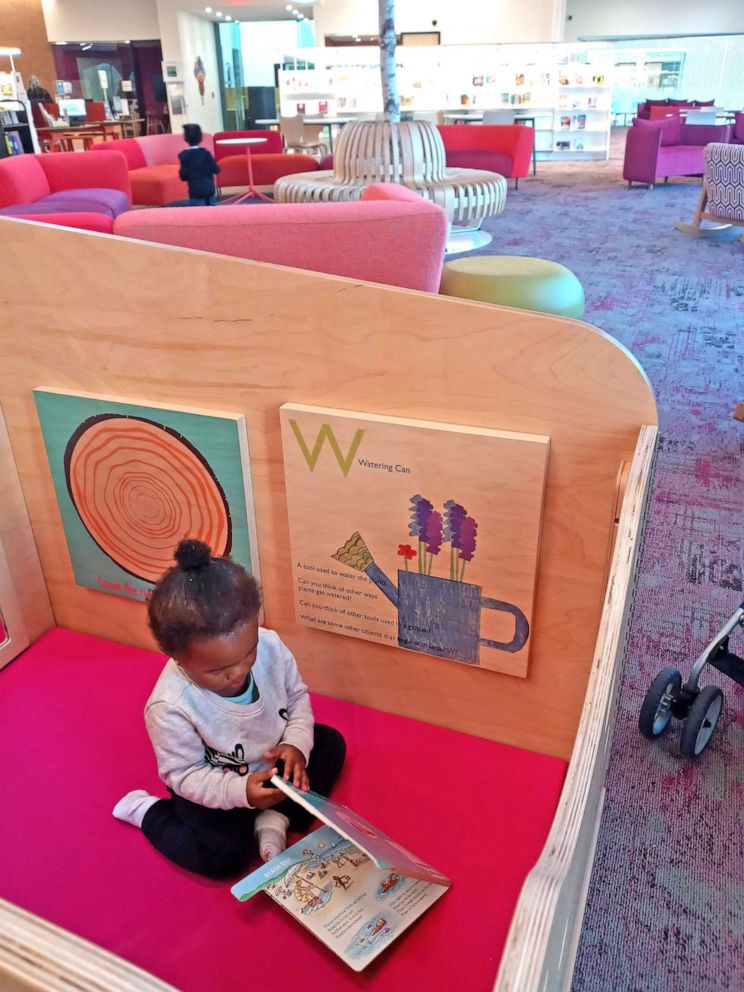 Janelle Goode
Witcher's one-year-old child takes a look at a picture book in the carrel's play area. A custom carrel at a Virginia library features a play area for babies and toddlers at Henrico County's Fairfield Area Library.

Lauren Smith Brody, author of "The Fifth Trimester" and an advocate of paid family and medical leave, commented on an Instagram post that shared a photo of the desk carrel in action, writing, "I adore libraries and librarians. They are the heroes we need. But let's be clear: THIS IS NOT CHILDCARE."

In an interview with "GMA," Brody said that though she does applaud the library's innovative workstation, she felt more needed to be addressed because "this is not the solution that we're all looking for."

"When you see an organization step in and create a solution that could potentially help a lot of people, you want to be supportive of it, but it doesn't solve the larger question of like, why is this even needed? Why do American families not have access to affordable child care?" she said.

According to a 2018 analysis from progressive think tank Center for American Progress, more than 51% of Americans live in so-called child care deserts, areas where there are an insufficient number of licensed child care centers.

"We're at our breaking point, and it's just really unsustainable," Brody said.

Faruk, who works as the director of public policy at the nonprofit Families Forward Virginia, agreed that access to child care is a big problem in the U.S.

"There's no universal child care, there's no universal health care. A lot of families don't even have paid sick leave, which is a real shame, and it's not that we can't afford these things. The stock market keeps hitting record highs. We have the money, it's just not a priority," he said.

In the meantime, as the push for more access to child care continues, public institutions such as the Fairfield Area Library hope to continue addressing their communities' needs in the interim.