As Democrats this week scrambled to close the deal on President Joe Biden's landmark social spending legislation, Liuba Grechen Shirley, a mom of three, said it has been "heartbreaking" to watch as federal paid family and medical leave appear less and less likely to be included in the final bill.

"It's heartbreaking because after the last year, after the pandemic, after seeing so many women pushed out of the workforce, we have a once-in-a-generation opportunity to finally change our policies," said Grechen Shirley, of Long Island, New York. "The fact that it's even a debate about whether we should have paid family leave, that's the problem."

Grechen Shirley, a former Democratic congressional candidate who gave birth to her third child 18 months ago, took to Instagram this week to share her own story of nearly passing out two weeks after giving birth to her second child. She said she was home alone at the time with her children because her husband was at work, but a friend was able to help her.

Two weeks later, after a hospitalization and at four weeks postpartum, Grechen Shirley wrote that she was in "no shape" to return to work.

"I was in no shape to put on some pants, hand over my infant to strangers and head into the office. And yet that is what American women do every day," she wrote in her post, which has since gone viral. "Childbirth is no joke. Recovery is no joke. Paid leave is not a vacation."

Up to 12 weeks of paid family and medical leave was originally written into Biden's Build Back Better legislation, but that number was whittled down to four weeks as the bill's price tag was negotiated down.

MORE: Lawmakers try to change how people are supported after pregnancy loss

Now, advocates and lawmakers are scrambling to make sure the paid leave provision lands back in the legislation.

"I'm going to fight every single moment to try and get this back," Sen. Patty Murray, D-Wash., said Thursday on "ABC News Live." "This is a policy that we have got to put in place because families in this country are struggling."

Dawn Huckelbridge, director of Paid Leave for All, said Friday her organization is pressuring lawmakers to keep four weeks of paid family and medical leave in the bill.

"When we started this process, we wanted 12 [weeks] and we were fighting for 12, but to the majority of Americans who right now don't have a single day of paid leave, four weeks is still meaningful and can still be lifesaving," she said. "That's something the administration committed to just days ago and we are fighting for at least that."

"We're going to keep fighting until the ink is dry," she continued. 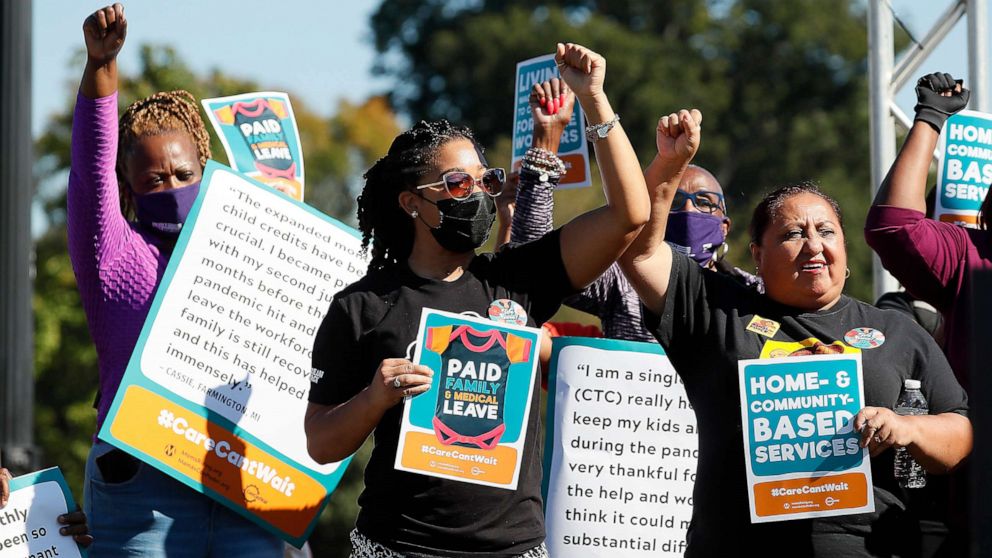 Huckelbridge said her organization and other advocates of paid leave see keeping the provision in the Build Back Better bill as a "nonnegotiable."

"This is not only a common-sense tool in terms of jobs and health but it's also one of the most popular policies in the country," she said. "This is a policy that has not just enormous consequences for our economy and public health, but political consequences as well."

The call for Congress to pass paid family leave -- and take the U.S. out of the small pool of countries that does not currently guarantee it -- comes as many families, particularly working moms, are still trying to recover from the dual child care and economic crises brought on by the coronavirus pandemic.

During the pandemic, around 3.5 million moms of school-age children left active work, shifting into paid or unpaid leave, losing their job or exiting the labor market altogether, according to the U.S. Census Bureau.

Grechen Shirley, also the founder of Vote Mama, a political action committee and foundation focused on the political participation of moms, said she had to leave the workforce after the birth of her first child

She said she hesitated to share her personal postpartum story on social media, but found herself "at wit's end" watching the debate in Congress.

"I was just so angry to see that paid leave had been stripped once again," she said. "It should be a no-brainer."

Other moms also took to Twitter to issue a call to action to lawmakers, including billionaire philanthropist Melinda Gates.

But I'm disappointed that #PaidLeave, an essential piece of the caregiving puzzle, was left on the cutting room floor. 2/5

"Paid leave is one of few public policies with broad bipartisan support—because we will all need to provide or receive care someday. This is our opportunity to fix a flaw in our system that has held our country back for decades. We can't waste it," she wrote. "It's not too late for lawmakers to include paid leave in the budget package. I urge Congress and the administration to find a way to invest in a better future by passing a national paid leave plan now."