As Congress continues to debate the Biden administration's $3.5 trillion social-spending package, a coalition of advocates for paid leave rallied at the Capitol Thursday to urge lawmakers to keep a provision in the bill that would give all workers up to 12 weeks of paid family and medical leave.

"I'm holding my breath as I watch the budget negotiations," said Daniella Knight, a mom of three from Annapolis, Maryland, who said she left the workforce because quality child care was not affordable. "For families like mine, this isn't about politics."

"It's about whether our elected leaders will stand up for us and build the care infrastructure that we've needed for such a long time," she continued. "So many families are struggling to care for their young children who are the future of their nation. We need support." 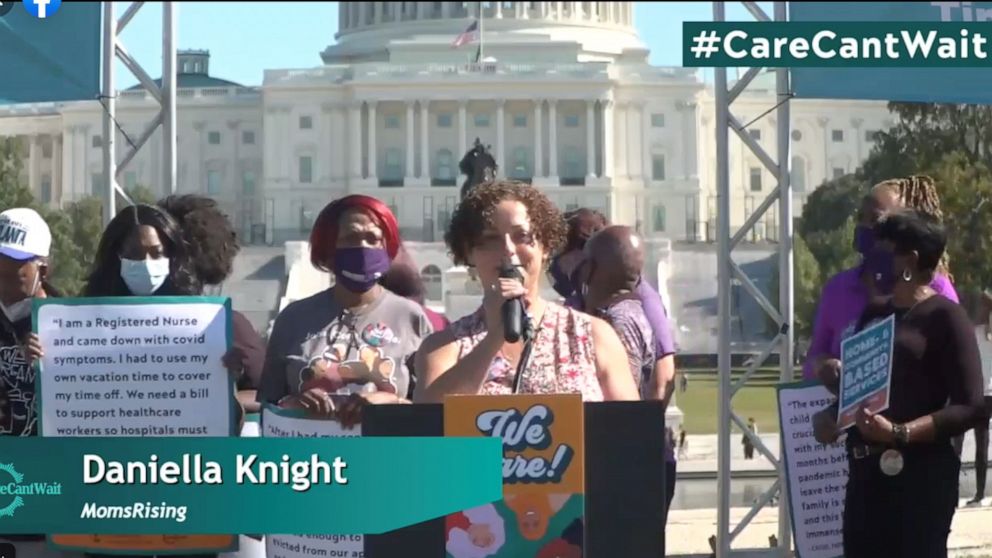 MomsRising
Daniella Knight, a mom of three from Annapolis, Maryland, speaks at the #CareCantWait rally in Washington, DC, on Oct. 20, 2021.

President Joe Biden has told Democratic lawmakers that he wants a deal on the spending package by the end of next week, and has said the price tag may need to drop from $3.5 trillion to just under $2 trillion.

In negotiations held Wednesday at the White House, Biden said the paid family leave provision could be scaled back to four weeks instead of 12 weeks, sources told ABC News.

"This is one of our top policy priorities in this historic legislation," the lawmakers wrote. "Just as we need roads and bridges, we need paid leave along with affordable and accessible child care and the expanded child tax credit, to ensure our families have a full range of needed supports."

Under the provision currently included in the spending package, called the Build Back Better Act, all workers in the U.S. would be allowed up to 12 weeks of paid leave to welcome a child, care for a family member or address their own serious medical condition, as well as three paid days for bereavement and up to 26 weeks of paid leave for military caregiving purposes.

The pay during a person's leave would be paid for by the government, not individual employers.

Only 27% of private industry workers currently have access to paid family leave, according to the Bureau of Labor Statistics.

High-profile advocates for paid leave have mobilized in recent weeks as Congress has debated the spending package. On Wednesday, Meghan Markle, the Duchess of Sussex, released an open letter to Congress on the issue, writing, "I'm not an elected official, and I'm not a politician. I am, like many, an engaged citizen and a parent."

"And because you and your congressional colleagues have a role in shaping family outcomes for generations to come, that's why I'm writing to you at this deeply important time—as a mom—to advocate for paid leave," Markle wrote, later adding, "The working mom or parent is facing the conflict of being present or being paid. The sacrifice of either comes at a great cost."

In addition to paid leave, rallygoers Thursday also spoke out in support of keeping other elements of care infrastructure in the final bill package, including an extension of the child tax credit and investments in child care, including living wages for care workers.

Pelosi also addressed the rally, noting an outcome of less than the $3.5 trillion initial proposal is still a "good first step." 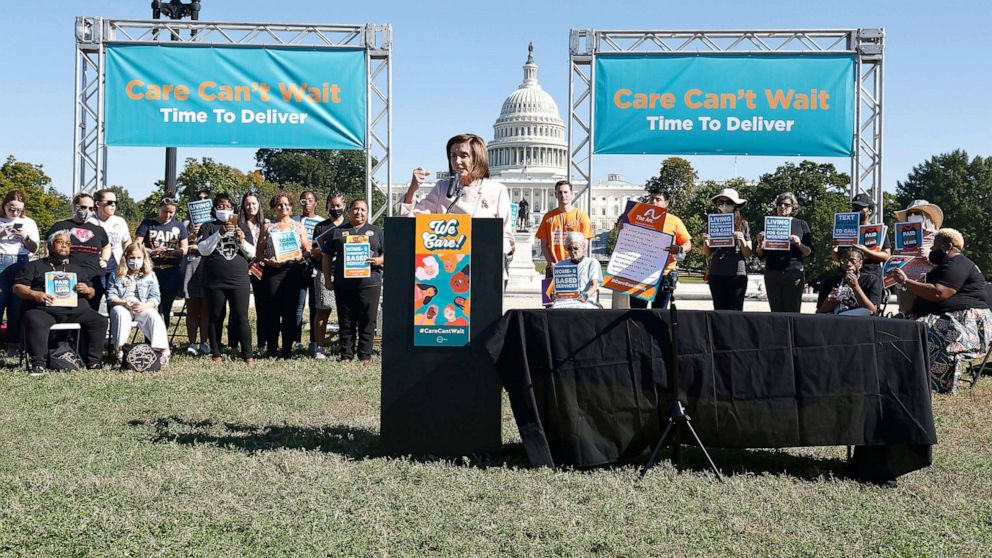 Paul Morigi/Getty Images for MomsRising Together
House Speaker Nancy Pelosi speaks at a press conference supporting Build Back Better, in front of the U.S. Capitol on Oct. 21, 2021, in Washington, D.C.

"I myself am more of the fact that we don't have the $3.5 [trillion] but even half of that is bigger than anything we've done before, and it would be a good first step," she said. "We are united around the 'care can't wait' agenda. I'm going to go there right now to continue the meetings to get the job done."

Rep. Sara Jacobs, D-Calif., spoke at the rally while holding Juno, the infant son of her chief of staff, whose child care she said fell through Thursday, forcing her to bring her son into the office.

"We decided what better way to highlight the very issue that we're talking about than the fact that Juno had to come to work today with us," said Jacobs. "For so long here in Washington, the voices of women, the voices of parents, the voices of care workers that are largely women and women of color, haven't always been heard."

"And when you don't center women and kids and care workers in policy making, it's not surprising that you end up with a national child care crisis, and an economy that simply isn't working for millions of families," she said.

During the coronavirus pandemic, around 3.5 million moms of school-age children left active work, shifting into paid or unpaid leave, losing their job or exiting the labor market altogether, largely due to increased caregiving duties, according to data from the U.S. Census Bureau.