U.S. Secretary of Transportation Pete Buttigieg has spoken out about his decision to take paternity leave after the birth of his twins, calling it "important work."

The comments from Buttigieg come after Fox News' Tucker Carlson and other prominent conservatives mocked Buttigieg's decision to take time off to care for his newborn twins.

"Pete Buttigieg has been on leave from his job since August after adopting a child," Carlson said in a segment last week on "Tucker Carlson Tonight." "Paternity leave, they call it, trying to figure out how to breastfeed. No word on how that went."

Buttigieg, who welcomed twins Joseph and Penelope with his husband Chasten in August, said Sunday he is "not going to apologize" for taking time away from his job for his family.

"As you might imagine, we're bottle feeding and doing it at all hours of the day and night," Buttigieg said on CNN when asked about Carlson's comments. "I'm not going to apologize to Tucker Carlson or anyone else for taking care of my premature newborn infant twins. The work that we are doing is joyful, fulfilling, wonderful work. It's important work."

Chasten and I are beyond thankful for all the kind wishes since first sharing the news that we’re becoming parents. We are delighted to welcome Penelope Rose and Joseph August Buttigieg to our family. pic.twitter.com/kS89gb11Ax

Buttigieg's paid leave after the birth of his twins came at the same time as the Biden administration's infrastructure package was being debated in Congress, an absence that sparked Carlson's criticism.

MORE: Congress close to passing paid family and medical leave: Here's what it would mean

A Department of Transportation spokesperson told ABC News that for the first four weeks after the birth of his children, Buttigieg was "mostly offline except for major agency decisions and matters that could not be delegated."

"He has been ramping up activities since then," said the spokesperson, adding the secretary will "continue to take some time over the coming weeks to support his husband and take care of his new children."

"The Secretary feels fortunate and grateful to be able to take time to focus on his responsibilities as a father, and believes all American parents deserve the same," the spokesperson said in a statement. "The president's Build Back Better vision calls for paid family leave for all Americans, and the Secretary now brings new perspective to his efforts to push for the Biden-Harris Administration’s push to ensure every American has access to paid leave." 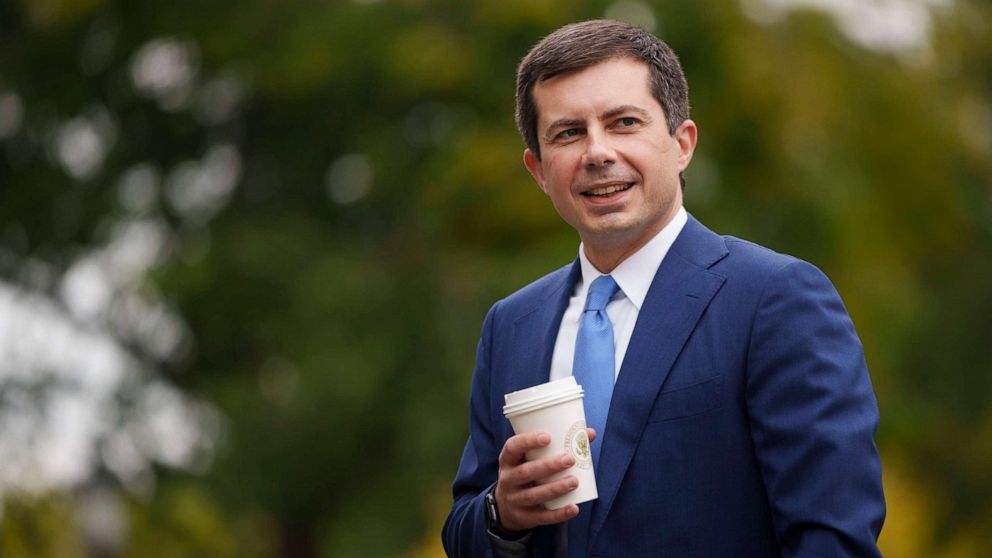 The Biden administration's Build Back Better Act, a $3.5 trillion human infrastructure package, includes a provision that would give all workers up to 12 weeks of paid family and medical leave.

If the provision remains in the bill, which has not yet passed Congress, it would take the U.S. out of the small pool of countries that do not currently guarantee paid leave.

Advocates of paid paternity leave point to research showing its success in not only helping fathers bond with their children, but also in creating long-term economic stability for families and in helping foster an equal balance of parenting duties between partners from the start.

“There is a new generation of leaders, hard-charging CEOs like myself, who are striving to be the best at what we do both at work and with our families," said Alexis Ohanian, co-founder of Reddit, who has partnered with Dove Men+Care to advocate for paternity leave. "I’ve offered 16 weeks of leave to all my employees for over half a decade now and encourage everyone, especially the men, to take advantage of it."

"I can’t expect my employees to be their best if the most important thing in their life - their family, their newborn - is in distress. And even if all is well at home, that’s still valuable time to spend," said Ohanian, the father of a 4-year-old daughter with his wife, Serena Williams. "I’ve met many billionaires over the years and not a single one of them has told me they regretted spending too much time with their children.”

Criticisms of paternity leave, like those Buttigieg faced, show the stigma that still remains in the United States around men taking time off work to care for their children, according to Molly Day, executive director of PL+US (Paid Leave for the United States), an organization advocating for paid family and medical leave by 2022

"I think that the stigma around paternity leave is to a certain extent, unsurprising, because we've really failed to teach men and boys caregiving skills as a society," said Day. "Now we are finally starting to see through a generation of men who are stepping into roles of dad who are increasingly unwilling to give up that opportunity and responsibility to care for their loved ones."

Day described the U.S. as currently being at an "inflection point" in that there is overwhelming public support for paid family leave, but there is also a lack of access, which adds to the stigma around men taking paternity leave.

Just 13% of employees in the U.S. work in a job where paid paternity leave is offered to all male workers, according to Day.

MORE: 10-day mandated paternity leave? It's coming to countries in Europe but the U.S. lags behind

Among those who took parental leave, the median length of paternity leave for dads in the U.S. was one week, according to Pew Research Center data.

"Caregiving is still dominated disproportionately by women, but at the same time, there are structural things that have reinforced that," Day said. "We do not have a national paid family and medical leave policy that ensures that people can care for their families without having to worry how they're going to pay their monthly bills."

Under current U.S. policy, the Family and Medical Leave Act, employees who qualify can take time off to care for a newborn or loved one or recover from illness without fear of losing their job, but in most cases the leave is unpaid.

Only 27% of private industry workers currently have access to paid family leave, according to the Bureau of Labor Statistics.

Ohanian said he supports a federal paid paternity leave policy because it would take the onus off employers, and give access to paid leave to all Americans, no matter where they work.

"We need policy change that makes parental leave a reality for all families -- especially giving this opportunity to the many small businesses who employ so many Americans, but don’t have the resources to offer the generous plans we can in tech," he said. "Not only does it lead to healthier outcomes and lower medical costs, employees retain for longer and are more productive. It’s good for society and good for business.”

Federal employees are now entitled to 12 weeks of paid parental leave per year, but, as a cabinet member, Buttigieg's leave was approved by the White House.

White House Press Secretary Jen Psaki described Buttigieg in a tweet as a "role model on the importance of paid leave for new parents."

Also proud to work in an Administration that is fighting to make paid leave a reality for everyone, and with people like @SecretaryPete who are role models on the importance of paid leave for new parents https://t.co/Zby6W6XoNo

Paternity leave advocates said the examples set by Buttigieg and other prominent leaders like Ohanian are important.

"As unfortunate as Tucker Carlson's comments were, at the end of the day, I hope what people take away from this is that men at the peak of their professional careers can and should take the time to care for their families," Day said. "I hope this moment is a powerful and poignant call to action for our legislators and wake-up moment to families of what they deserve and what we need."