This bride to be didn't say it -- she declared it. Kayleigh Brown had a "The Office" themed bridal shower of any super fan's dreams and we can't stop laughing at all the amazing details. 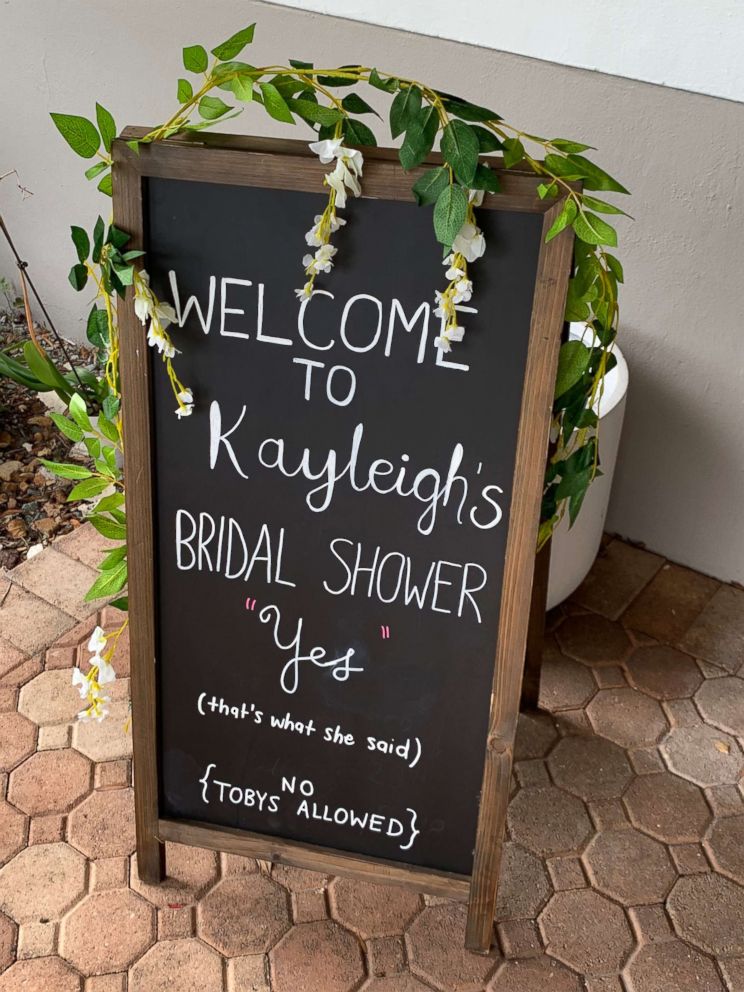 "I walked in and was blown away," Brown told "GMA" about her favorite TV show-themed party on Sunday. "I felt like throughout the whole day, I would notice little things that I hadn't seen yet. I didn't want [it] to end."

Today was my bridal shower. I still can’t comprehend how lucky I am. My mom and my gals went above and BEYOND anything I could have ever expected for today. Im definitely in the “good old days” that Andy was talking about. I’ll never forget today. DUNDER MIFFLIN FOREVER! pic.twitter.com/vsFR4oIAwV

From beet-shaped cookies and a "World's Best Bride" mug to a Meredith Palmer mimosa bar, the party paid serious tribute to the scenes and subtleties of the beloved Scranton-based show. 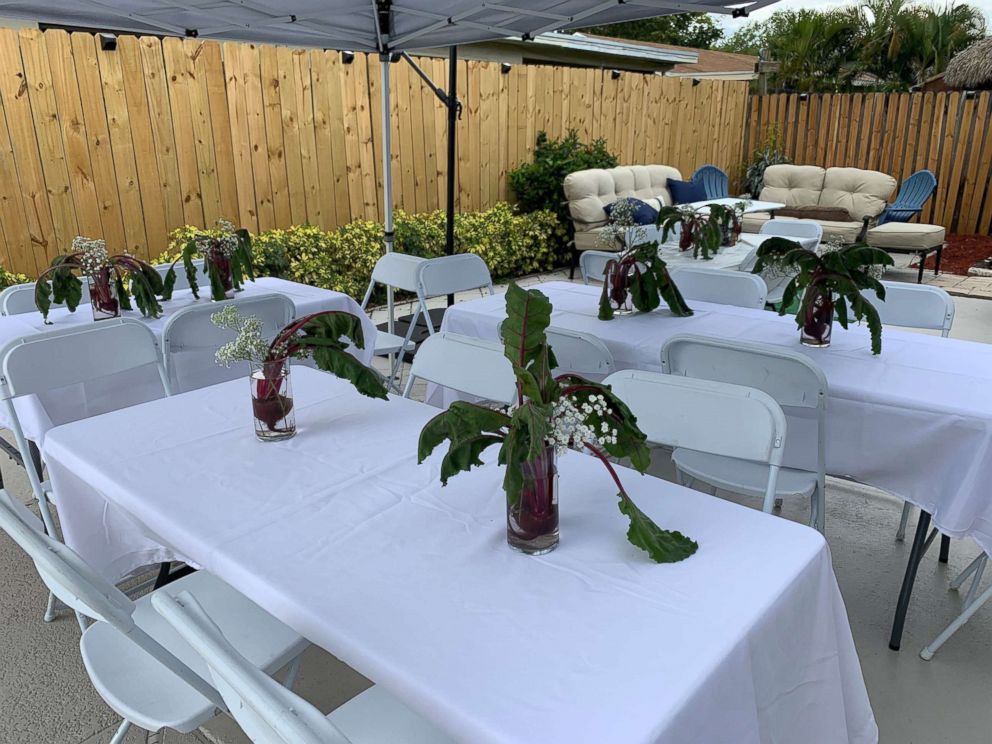 "I think my biggest reaction was to the beet centerpieces," she said about the table decor that screamed Dwight Schrute, who owns a 60-acre beet farm on the show. "It was so creative and incredible and something I didn't expect at all."

True Dunder Mifflin fans could spot all the hilarious details from the photos alone, but Brown broke down her favorites that would easily earn a Dundie.

"I loved every single detail. My girls went above and beyond the call of friendship for this shower," Brown said. 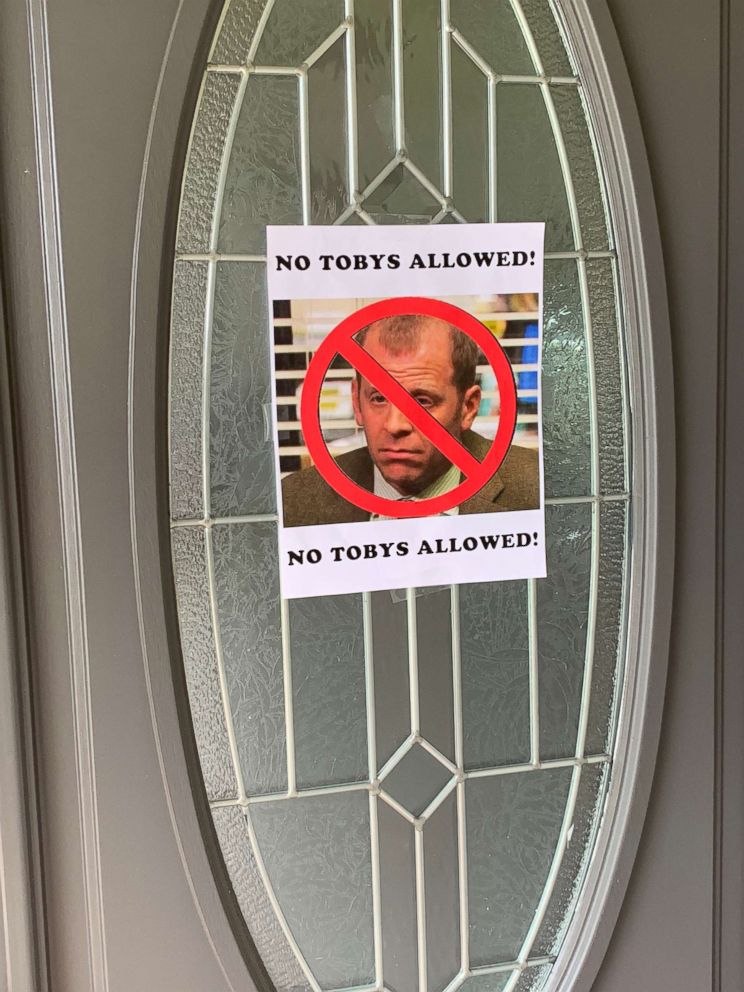 Kayleigh Brown
The "No Tobys Allowed" sign hung on the front door at Kayleigh Brown's "The Office"-themed bridal shower.

Before anyone even entered the epic bridal bash, there was a sign on the door that said, "No Tobys allowed!" A nod to Michael Scott's infinite hate for the human resources rep that he thought sucked the fun out of every office moment.

Another simple sign read, "It is your bridal shower" -- a hilarious tribute to the time Jim and Dwight were tasked with throwing Kelly Kapoor’s birthday party in episode 16 of season five.

There was a dessert tray with sugar cookies all decorated with hilarious quips and moments from the show. 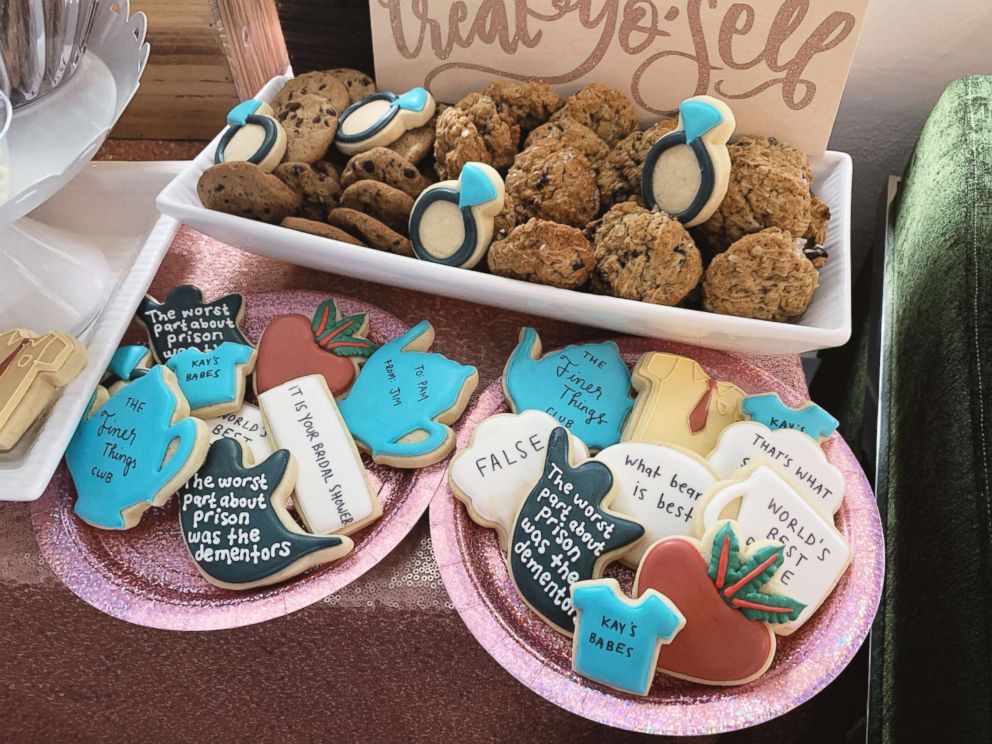 The party also included a mustard yellow shirt a la Dwight Schrute, a black ghost with white icing that said "the worst part about prison was the dementors," beets (that look like the real money beets, if you ask Dwight K. Schrute), teal t-shirt frosted cookies that said "Kay's Babes" (a nod to Scott's Tots), a white mug that said "World's Best Bride," and, of course, the teapot Jim gave to Pam for secret Santa.

Brown's very own party planning committee was comprised of her seven bridesmaids and mom, who she said are all "very crafty" and worked through the night to get the decor set up. 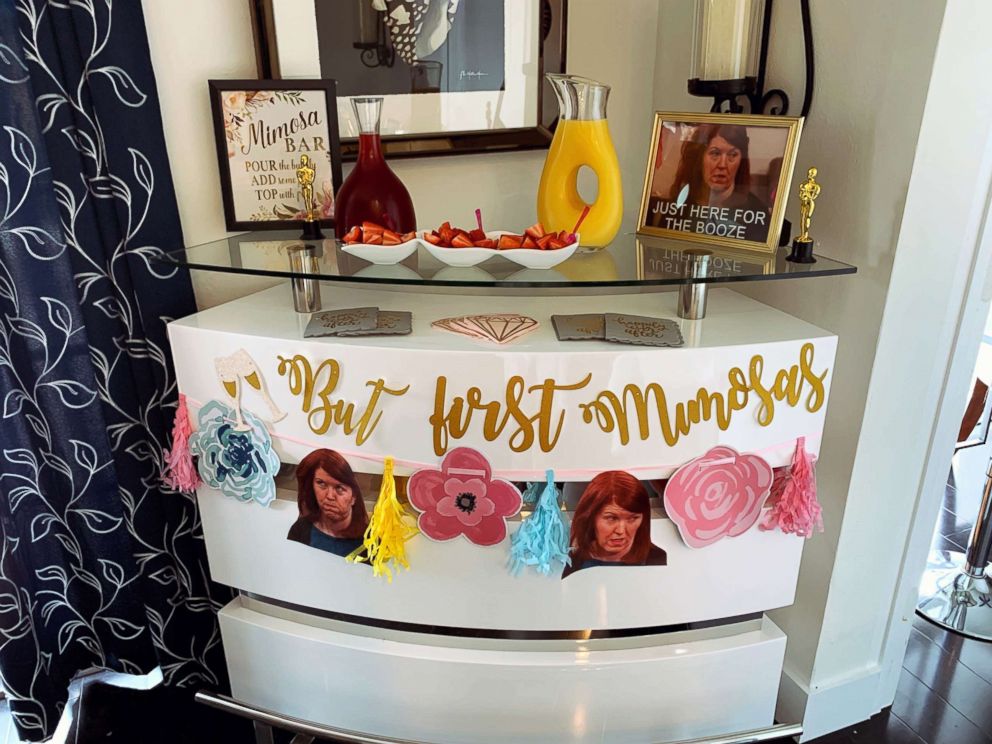 Kayleigh Brown
A mimosa bar with pictures of Meredith Palmer from "The Office" for Kayleigh Brown's bridal shower on March 3, 2019.

"What's super incredible is that the majority of the shower was DIY," she said. "Almost all of the decorations were hand-made." 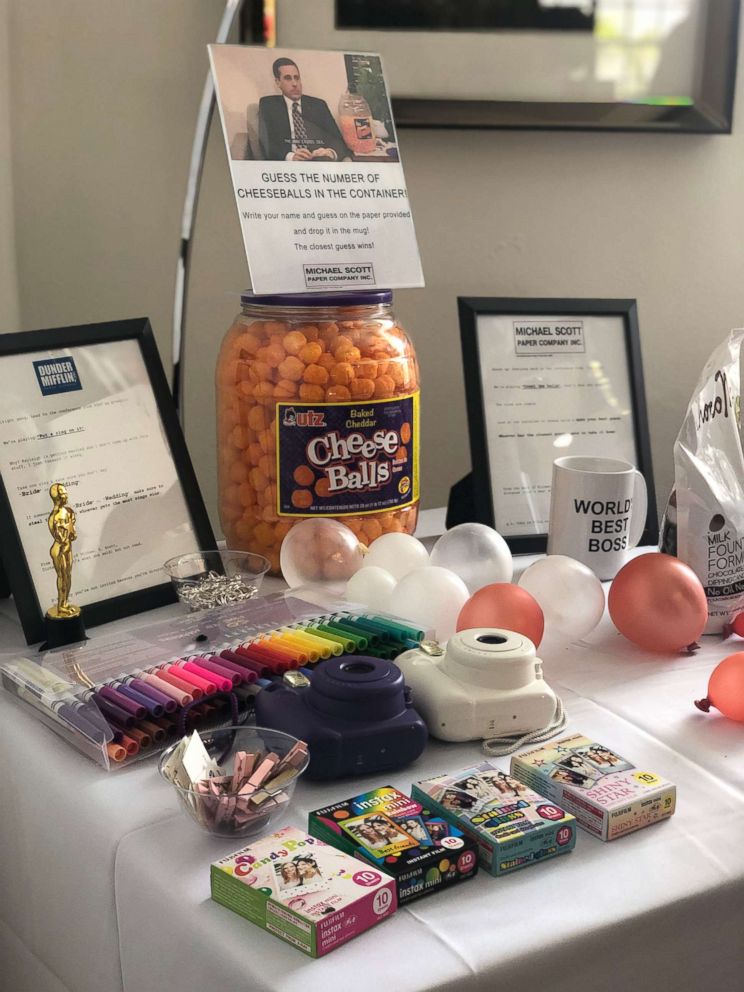 No shower would be complete without games, so "Kay's Babes" included a "guess the number" game using a jumbo container of cheeseballs, just like the stash Michael Scott had when he started his own paper company.

There were also "barely filled" balloons on the game table -- another ode to Dwight and Jim's terrible party planning skills (as mentioned above).

(MORE: The Man Behind 'The Office's' Favorite Suck-Up, Dwight Schrute)

"My mom helped to bring in that 'bridal shower feel,' so it felt like a super classy, but really fun themed party," Brown explained. "They all worked so unbelievably hard on this shower and I cant express my level of appreciation and love for my friends." 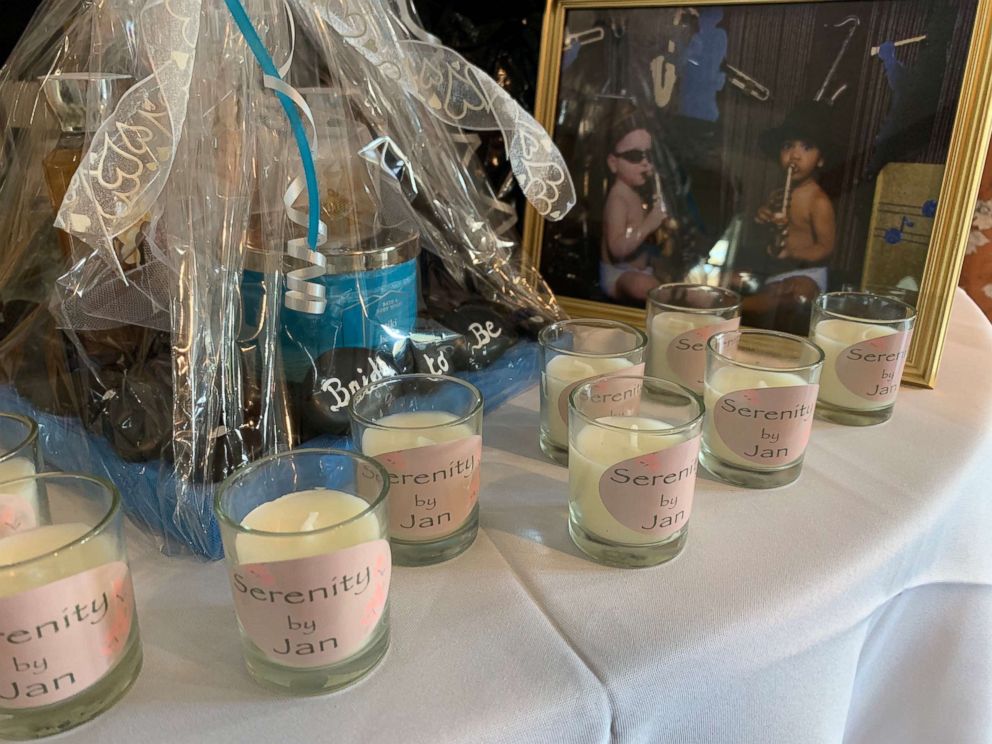 Brown, who said she knew the theme of the party ahead of time, made little "Serenity by Jan" candles inspired by Jan Levinson's hand-poured crafts from the show.

Even the couple's wedding website and hashtag are a nod to their love of "The Office."

"Ian [Carpenter], my fiancé and I, decided to create our wedding website URL as 'threat level wedding,' our hashtag is #threatlevelwedding," a reference to Michael Scott’s self-written and produced movie in the series, "Threat Level Midnight," the bride said.

"And my signature drink is called 'That's what she said," -- Michael Scott's signature comeback -- "'The Office' is simply the best show," Brown said.

Brown will say "I do" and take all of the Jim and Pam style mental pictures with her soon-to-be husband on June 29 in Florida.