As the nation reflects on a fiery first presidential debate between President Donald Trump and Democratic presidential candidate Joe Biden that saw interruptions, name calling and personal attacks, parents especially are left to wonder how to explain this election season to their children.

"I was so happy that [the debate] was past my own son's bedtime," said Erin Geiger Smith, mom of a 6-year-old son and the author of "Thank You for Voting," an in-depth look at the American electoral process. "As far as watching an important American event unfold, I thought this was one that kids probably shouldn't watch live and I thought that was extremely disappointing."

"This should be such an important part of our electoral process, seeing how two candidates for the highest office present themselves and discuss the issues," she said. "In this case it was how they present themselves that really was the big takeaway." 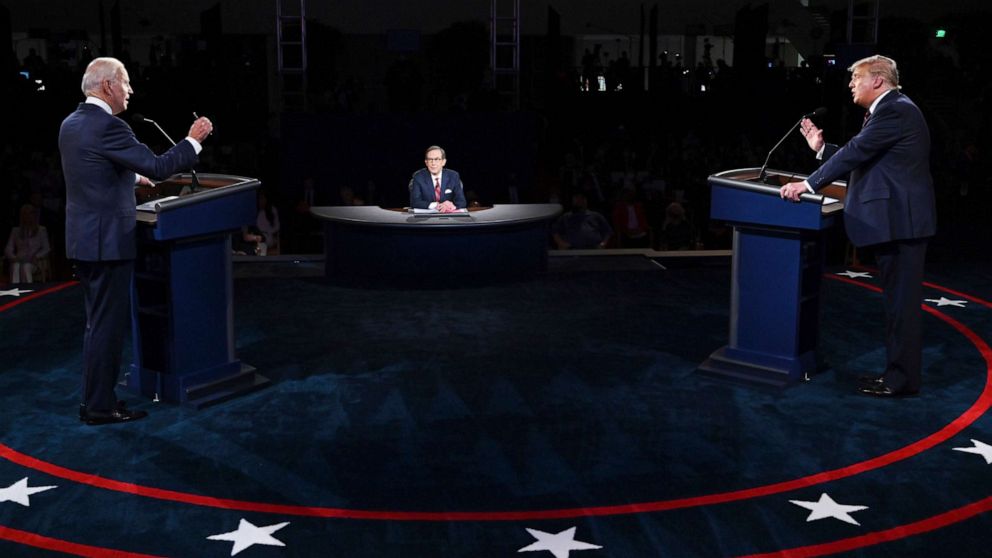 Parents who teach their children the importance of listening to other people and respecting other opinions may have seen exactly the opposite of that in the debate. They must also contend with the fact that there are three debates still to come -- one vice presidential and two presidential -- and more than 30 days to go until the Nov. 3 election.

Shielding children from the election though is not the answer if you want them to become engaged citizens who exercise their own right to vote once they turn 18, according to Geiger Smith.

"Voting is a learned behavior and if your parents teach you how to do it and talk to you about it, you're much more likely to be a voter when you do turn 18, and continue to vote throughout your life," she said. "We have really low voter turnout in this country, and it's even worse with our youngest voters, so the time to teach someone how to vote and to make it part of their lives is really now."

Here are tips from Geiger Smith and other experts on how to talk about the 2020 election with kids.

1. Watch debates with them, or record and watch highlights later as a family.

Whether to watch election coverage as a family of course depends on your child's age, experts say.

Children who are elementary school age and younger probably do not need to watch much debate and election coverage and especially not live, according to Robin Gurwitch, Ph.D., a professor in psychiatry and behavioral sciences at Duke University Medical Center.

For children of middle school age, it depends on the child and the topic at hand, according to Gurwitch. High school students should be able to watch the debate live alongside adults with whom they can have an ongoing discussion about the subject matter at hand.

"It's not just, 'You go watch this and tell me what you think,'" said Gurwitch. "You should watch it together and talk about why we have the debates, what is the purpose of debates, how they're supposed to look and how elections work."

For families who do not watch the debates live, Geiger Smith recommends parents engage their children the next day by watching TV news coverage and reading newspaper coverage together.

2. Make the debate a teachable moment.

Despite its lack of decorum, the debate can still be a teachable moment for children about how to engage in discussion and respect others' opinions, according to Deborah Diesen, a children's book author who wrote "Equality's Call" about voting rights.

"Use this conversation as an entry point for observing and talking about the communication styles and skills of the candidates, and evaluate if they reflect healthy communication expectations," she said.

Geiger Smith recommends using the moment to watch previous presidential debates with your children to reflect on the differences and to talk about how debates have been handled in the past and what stands out.

Tuesday night's debate may have been particularly unnerving for Black children who heard President Trump fail to condemn white supremacy when asked the question.

There has also been a heightened sense of fear around voter suppression this election season and what may happen on Election Day if there isn't a clear winner in the presidential race or if a candidate doesn't concede peacefully.

All of those are reasons for parents to spend extra time both listening to their kids and reassuring them, according to Gurwitch.

"When there is fear about whether our country is going to be a safe place and continue, we really want to make sure we set that record straight," she said. "[Tell your kids that] we have been a democracy for over 200 years and everybody, whether you're a Republican or Democrat or something in between or on the outside, believes that the democracy of our country is our No. 1 issue and it will continue no matter what, that there are people on both sides that are very committed to ensuring that elections are safe and that elections are fair and that there's going to be a continuation of the democracy that our country has celebrated since it began."

Parents can let kids guide the discussion around the debate and the election as a whole by asking questions like what they thought of the debate, what their friends are saying about the debate and how they're feeling, recommends Gurwitch.

"I think you do have to have that conversation that if you ever feel threatened, please talk to me, I'm here to listen. We'll figure this out together," she said. "And I often think the other piece is equally important, that if there is something uncomfortable or hurtful that is said, it is never OK to be quiet, that it is important [to speak up]."

4. Make kids a part of the voting process.

Geiger Smith recommends moving the conversation from the divisiveness of the campaigns to the voting process and teaching kids how and why we vote.

"I definitely hope that one debate doesn't stop any of us from teaching our kids about our political process," she said. "It's helpful for kids too to know that their parent isn't just stressed, that there's something that they can do about it."

Both Geiger Smith and Gurwitch recommend talking with children about your family's beliefs and values and why you believe them, while also leaving space for kids to form their own opinions.

When it comes to voting, children can be involved in age-appropriate activities, from researching issues and candidates' platforms, to going with a parent to vote, helping a parent fill out a ballot at home, volunteering with a campaign, making sure relatives and family friends are registered and have a plan to vote, figuring out in what election they'll be eligible to vote and even looking at all the different "I Voted" stickers from around the country, according to Geiger Smith.

"No matter what, stressing the importance of voting should be the top priority," she said. "Kids can get excited about the process by knowing that it's coming for them one day."