Companies from Old Navy to Tory Burch, Warby Parker and Target are doing something different this year to help fill a shortage of poll workers on Election Day.

Those four companies have announced they will pay store employees who serve as poll workers for eight hours of work.

Other companies, including Patagonia and Blue Apron, plan to close down on Election Day so their employees can vote and serve as poll workers. Uber has made Election Day a paid company holiday so its employees can also volunteer and vote, according to Power the Polls, an initiative founded by a group of civic organizations working to close the poll worker shortage in the U.S.

The companies' actions come as the U.S. prepares for a national election during a pandemic and experts warn that polling locations could be forced to close on Nov. 3 if there are not enough workers to staff them. Officials in several key battleground states told ABC News this month they are still short thousands of poll workers and could be forced to reduce the number of polling locations -- a move that would likely bring longer lines to in-person voting sites.

MORE: Michelle Obama's 'VOTE' necklace and more stylish picks that get out the vote

"Over the last few years one of the major reasons we've seen long lines is due to the shortage of poll workers, and that existed before coronavirus," Carolyn DeWitt, executive director of Rock the Vote, told "Good Morning America." "This year, obviously we have more concerns about it because the shortage of poll workers will and has already resulted in the closure of hundreds of poll sites, which leads to longer lines and a lot of confusion about where to vote." 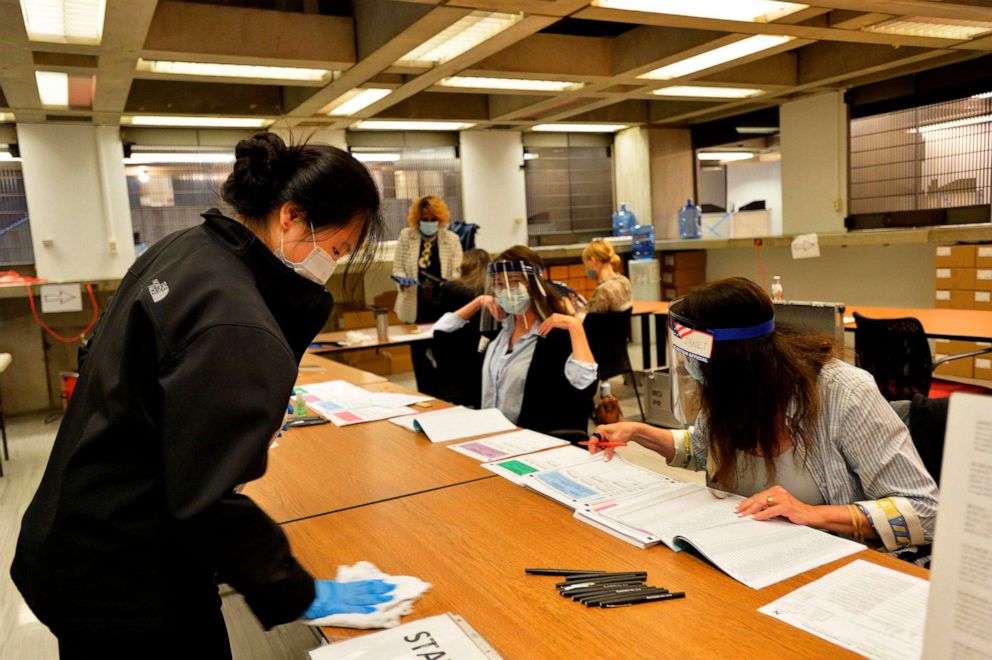 Joseph Prezioso/AFP via Getty Images
An election worker sanitises and cleans the polling location to help stop the spread of COVID-19 at Boston City Hall during the Massachusetts State Primary on Sept. 1, 2020, in Boston.

Already this year states from Georgia to Wisconsin that held primary elections during the coronavirus pandemic have faced hours-long lines, problems with voting equipment, poll worker shortages and other issues.

An additional complication this year is that the majority of people who have historically served as poll workers are, because of their age, in the high-risk category for COVID-19, the respiratory illness caused by the novel coronavirus, according to the Centers for Disease Control and Prevention. In the 2018 general election, 58% of U.S. poll workers were ages 61 and older, according to Pew Research Center.

As a result, groups like Power to the Polls, with its first-of-its-kind initiative to recruit poll workers, and When We All Vote, the bipartisan voting initiative led by former first lady Michelle Obama, are making a specific plea to young people to sign up as poll workers.

"It's such a great way to get young people plugged in," said Stephanie Young, When We All Vote's chief officer of culture and communications. "Poll workers are kind of the unsung heroes of elections and people don't realize how critical this volunteer role is. We take it for granted and we can't do that during a global pandemic."

That number, experts say, will need to be increased in the 2020 election to make sure everyone has a chance to vote.

MORE: 3 things to know about voting 3 months ahead of the 2020 election

Here are four things to know about signing up to be a poll worker for the 2020 election.

Power to the Polls and When We All Vote also have sign-up information available online.

In most cases, the sign-up process just involves filling out a form and committing to a training session before Election Day.

Laura Hermosilla, a high school senior in Tucson, Arizona, just turned 18 and plans to be a poll worker in the first-ever election in which she can vote.

"It definitely serves as another opportunity to help my community out," said Hermosilla, who plans to take a day off of school to volunteer. "Over past elections, younger people are usually the ones that are the least active, so I feel like, especially with everything that has gone on this year, it's finally our chance to make sure that our voices are heard and the issues that we care about are addressed."

Poll workers work long hours on Election Day, as long as a 12-hour shift, but in most jurisdictions they are compensated.

Poll workers in Austin, Texas, for example, earn $12 per hour, according to the EAC.

In Miami, poll workers can earn as much as $160 on Election Day, in addition to extra money for attending the training session and helping set up the precinct the night before an election, according to the EAC.

4. You'll do everything from giving directions to handing out 'I voted' stickers.

Poll workers do everything from checking in voters to updating their voter registration information if needed, according to Young.

They're also on hand to answer any questions, help elderly and disabled citizens to vote and open up and close down the polling locations.

"And they pass out the 'I voted' sticker that everybody loves," said Young.