April is Autism Acceptance Month, a time to embrace the differences of people with autism spectrum disorder (ASD), a developmental disability that impacts roughly one in 44 children in the United States, according to a study from the Centers for Disease Control and Prevention.

For Eric Garcia, a Washington, D.C.-based journalist and the author of the book "We're Not Broken: Changing the Autism Conversation," it's also a time to remember that people with autism are "everywhere."

"Autistic people work in every sector," he told "Good Morning America." "They're doctors and lawyers and waitresses. They're car mechanics. They're journalists. They're everywhere."

Fashion designers Tommy and Dee Hilfiger said three of their seven children have been diagnosed with ASD.

The couple said they first noticed signs of autism in their kids early on.

“Our son was counting steps at one-and-a-half years old and at 2, he stopped counting, stopped speaking. He was babbling quite a bit and then just stopped," Tommy Hilfiger said Tuesday on "GMA." "So we had him tested and obviously, it was a bit of a shock. But once you get over the shock, you then plan to do something about it."

The designer said he and his wife sought out expert advice for each of their children, who have exhibited different symptoms.

He added that one of his top tips for parents is to know the signs of autism in order to be able to recognize them in your child and get help early on.

“Early intervention is really the key,” said Tommy Hilfiger. “If you sense that your child is off in any way … if they’re not responding or if they seem like they’re in their own world, you should get them tested, and the earlier you get them tested, the sooner you can intervene.”

In addition to seeking out expert advice, the Hilfigers say building a support system within the autism community has really helped them as parents. 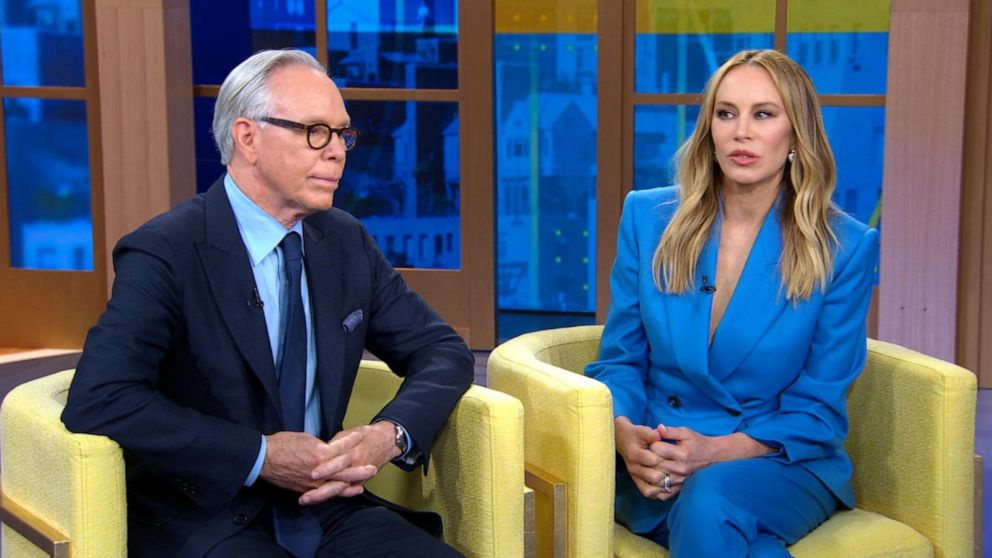 “I think it's really crucial that you talk to pediatricians," said Dee Hilfiger. "And once the child is diagnosed, I think the most helpful thing for us and for other parents is to seek out other parents."

“When you receive that diagnosis, it can be quite devastating but I think seeking out the support of friends made a big, big difference for us,” she added.

What to know about autism

People with autism have a wide variety of traits affecting communication, behavior and socialization, according to the CDC. The “spectrum” in autism spectrum disorder means that there’s a wide range of symptoms and severity. 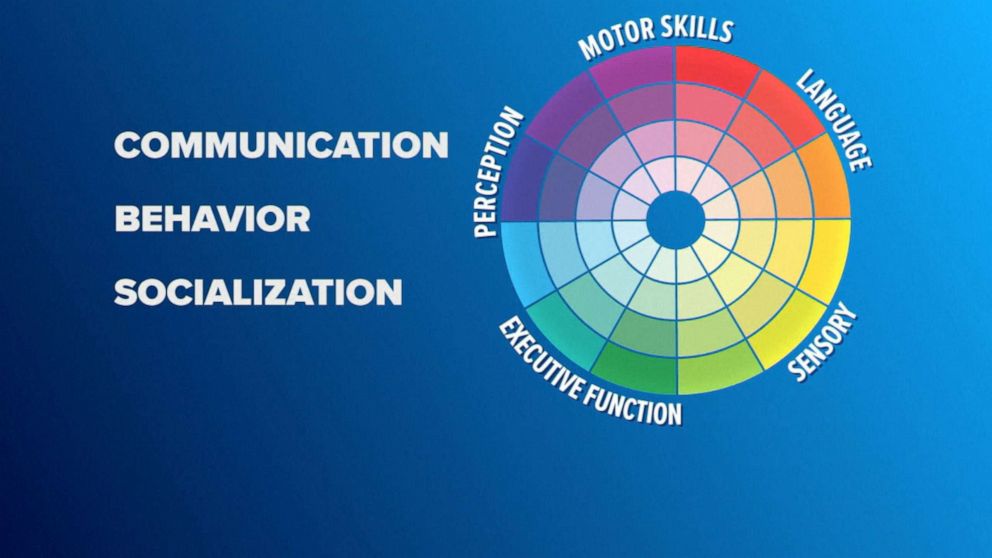 ABC News
Autism spectrum is illustrated in this graphic as a color wheel, where each person is affected differently.

A child of any race, socioeconomic status or ethnic group can get ASD. Boys though are four times more likely to be diagnosed with autism than girls, based on a study of children aged 8 years old. Kids that have a sibling with autism, and especially a twin, are more likely to have autism. Those with developmental disabilities or genetic and chromosomal diseases such as Down syndrome are also more likely to have ASD. There is also evidence that kids born to older parents have an increased risk of autism, according to several studies.

MORE: This non-traditional program is changing the way children with autism are treated

Garcia points out that autism "manifests itself in very different ways" in each person with the condition.

For Garcia, he experiences "stimming," which involves making repetitive movements or sounds, a calming tactic for when one feels overwhelmed. Garcia said for him that can mean playing with his tie and taking his class ring on and off.

"A lot of times I can just completely be overwhelmed and almost want to have a meltdown, like to the point where it's difficult for me to communicate or speak," he said. "And that's just my way to deal with all the sounds that we're having all around here."

Autism can be identified as early as infancy, although most children are diagnosed after the age of 2. There is no medical test to diagnose autism, so doctors watch a child's behavior and development to make a diagnosis, according to the CDC.

“Someone might have the communication delay, but may not have the motor skill delay,” said Dr. Jen Clark, a New York-based clinical psychologist and specialist in autism. “They may experience sounds and lights in a very different way than you and I would and sometimes they can experience a sensory overload and they may wear headphones and this will help to make the noise not as severe, but also they may avoid certain situations where it's just too overwhelming.”

The CDC notes that in some cases, people are not diagnosed with autism until they are teens or adults.

Experts say though that early detection of ASD is key, as is early intervention.

“When a child is young, the brain is capable of change,” said Clark, also the director of COAST Club, which offers therapy and social groups for children, teens and young adults with autism.

Early signs of autism in children may include, but are not limited to, little or no smiling and limited eye contact by 6 months; little to no babbling, pointing or response to their name by 12 months; and few or no meaningful two-word phrases by 24 months, according to the CDC. 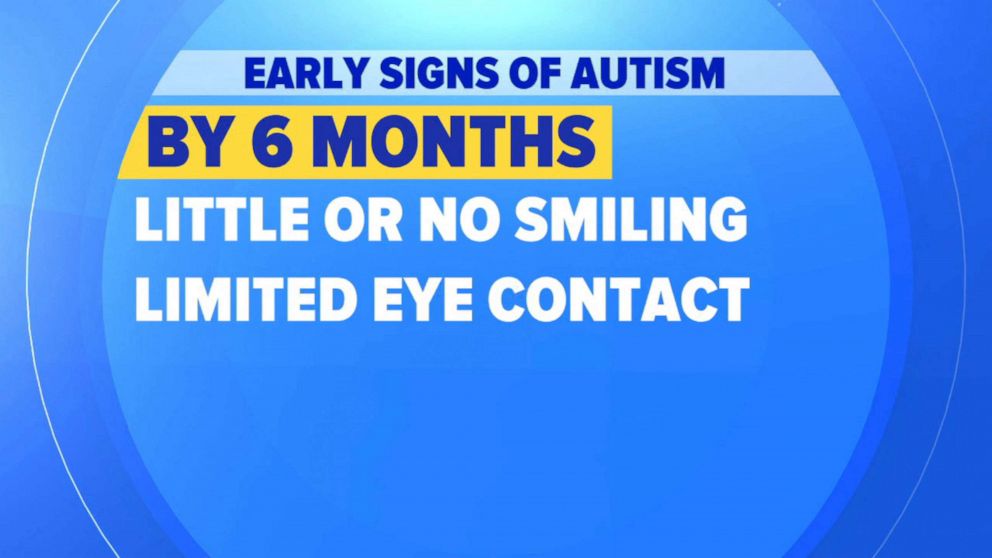 ABC News
A graphic lists early signs of Autism in children by 6 months. 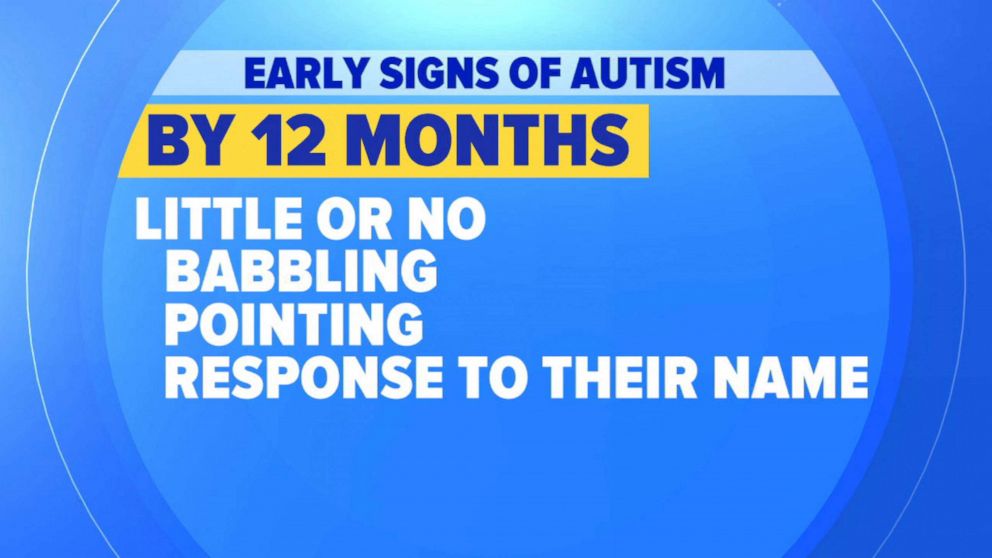 ABC News
A graphic lists early signs of Autism in children by 12 months. 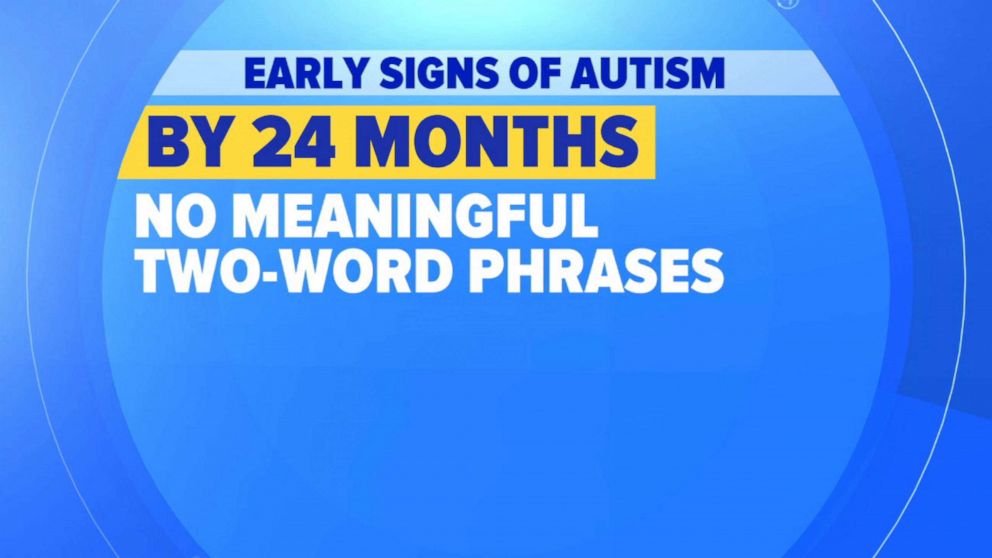 ABC News
A graphic lists early signs of Autism in children by 24 months.

Clark added that children may exhibit additional signs such as flapping of the hands, spinning, twirling and walking on their toes. She also says lining up toys, instead of playing with them in the way they’re intended to be played with, may also be a sign.

“If you do see these behaviors in your child, these are behaviors that are associated with ASD and important to mention to your pediatrician,” she said.

Treatment comes in many different forms, from mental health therapy to occupational, physical and speech therapies. Sometimes medications can be helpful for things related to ASD, like mood problems or inability to focus.

Jamie Felzer, M.D., MPH, an internal medicine resident at Scripps Clinic in San Diego, and Linda Drozdowicz, M.D., a fellow in child and adolescent psychiatry at Yale Child Study Center, contributed to this report through the ABC News Medical Unit.