By Kelly McCarthy
Video by Nidhi Singh
Share —
Sign up for our newsletters to get GMA delivered to your inbox every morning!

Immigrant women in the U.S. often make nearly impossible and difficult decisions to leave behind family members, careers and various aspirations in order to create a new life for themselves in America.

"Like most of the people who immigrate to this country, I wanted more opportunities for my family," Kandy Alva told "Good Morning America" about why she first moved to New York City from Peru in 2008. "Before I came I was in the management and hospitality field. Like all immigrants when they came to this country, even if you're a professional in your home country, you just start at zero here."

Alva earned her degree, worked as a nurse's assistant in a nursing home and eventually pivoted to a culinary career running her own cake shop thanks to her time with Hot Bread Kitchen, an organization that helps immigrant women and women of color cultivate business skills, sharpen their culinary chops and build relationships for a local support network to forge their future endeavors. 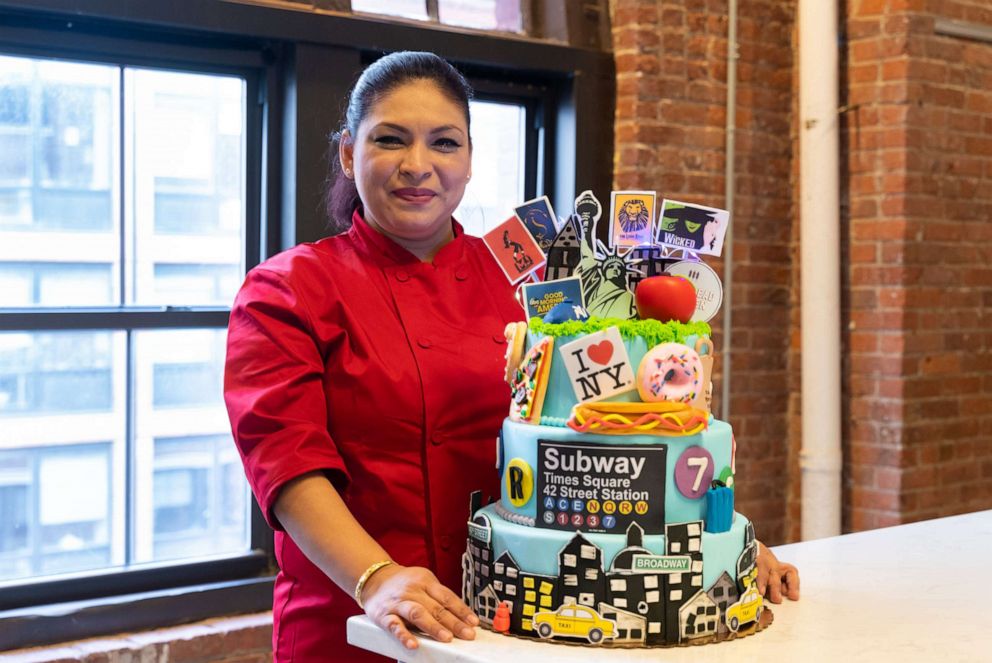 In 2018, she saw the nonprofit's culinary training program listed online, applied and secured an interview.

"There was more than 100 women in the same situation as me, with a lot of skills and they want to get ahead like me, most who were professionals in their own countries and want new opportunities," she said.

I'm like a true example that immigrants can do amazing things for their future.

Alva became one of 27 women from 10 different countries to make it into the culinary training program. After graduating in March 2019, Hot Bread Kitchen helped open another door, landing her an interview with the culinary team at Google, where she went on to work as a prep cook and restaurant associate in one of the tech giant's New York cafeterias.

"We represent women at Hot Bread Kitchen," she said. "Some women think we don't have a chance in this world [or] think that you don't belong in this country if you can't do your goals -- but if you make a lot of effort and focus on your dreams, your dreams can come true. I'm like a true example that immigrants can do amazing things for their future."

"Now, after Hot Bread Kitchen," Alva said "I started my own business, Sweet Kandy's Cakes, and I'm very proud of that."

Alva worked with her mother, who owned a catering business back in Peru and said "all the skills I learned from my mom I have utilized in this country."

"I feel very grateful for Hot Bread Kitchen and Google that gave me all the tools to get a position in this field," she said. "Every woman has a different situation, but at the same time they have the same goal: to get ahead. I believe Hot Bread Kitchen is my family in this country because they check in and keep track of how I'm doing."

"Most of the women in this field lost their jobs with COVID and we never felt alone in this moment. Hot Bread Kitchen always called us to see if we needed a part time job or just to say hi. That means a lot during difficult moments," Alva said.

The nonprofit organization has welcomed women with open arms to their table since 2008 and helped them pave a path towards entrepreneurial success in the culinary industry. Recently, Hot Bread Kitchen found a new home for its headquarters at the former Food Network test kitchen space inside Manhattan's bustling food hall Chelsea Market donated by Google.

The food career training program and job skills classes are back in action for the first time since early 2020 due to shutting down during the pandemic.

"There is now a room of 15 women learning and working so hard to get their first job in the culinary industry and it's really incredible to have them here," the organization's senior communications manager, Jenny Kutner, told "Good Morning America."

"Being a part of Hot Bread Kitchen made me realize more than anything else in this entire process, how important it is to have a community," she told "GMA." "The things that you learned from just simply speaking to other people is way beyond what you would ever learn in a class -- they really are able to help you with the ins and outs of what it means to be a business owner. And all of the little small nuances and details that you just don't even think about."

Their food truck has been in business for 25 years and Rasheed said it "all comes naturally" because it's in her blood.

"But when I graduated Stony Brook University my mom asked, 'Do you want to go ahead and start to take things over?' I wanted to continue her legacy and all the hard work that she had put in, so I kind of stepped up and I'm trying to take the business into a whole different sphere," she said.

Rasheed conceptualized a jarred spice line to get their brand into the consumer product space, but the mother-daughter duo needed a commercial kitchen to do so. That's where Hot Bread Kitchen came in.

"They really meet you where you're at. They were like we see that you're starting from the beginning, here are the resources to do it, here's community to help, and it's just been nonstop blessings ever since," Rasheed said. "There's a lot of responsibilities that we have to juggle and the food cart itself is a lot of work, it's like 7 to 7 every day. So that's been a journey."

It's just been really, really cool to kind of see yourself...that familiarity has been really nice and refreshing

"That was one of the main motivations for the whole concept was making your own version of what you really like from us and staying true to the flavors," Rasheed said.

Her grandmother encouraged her to start the business, she said, because there wasn't a jerk seasoning that lived up to what they ate in their home country.

"Now, the jerk chicken is basically one of our most popular, top selling items," she said. 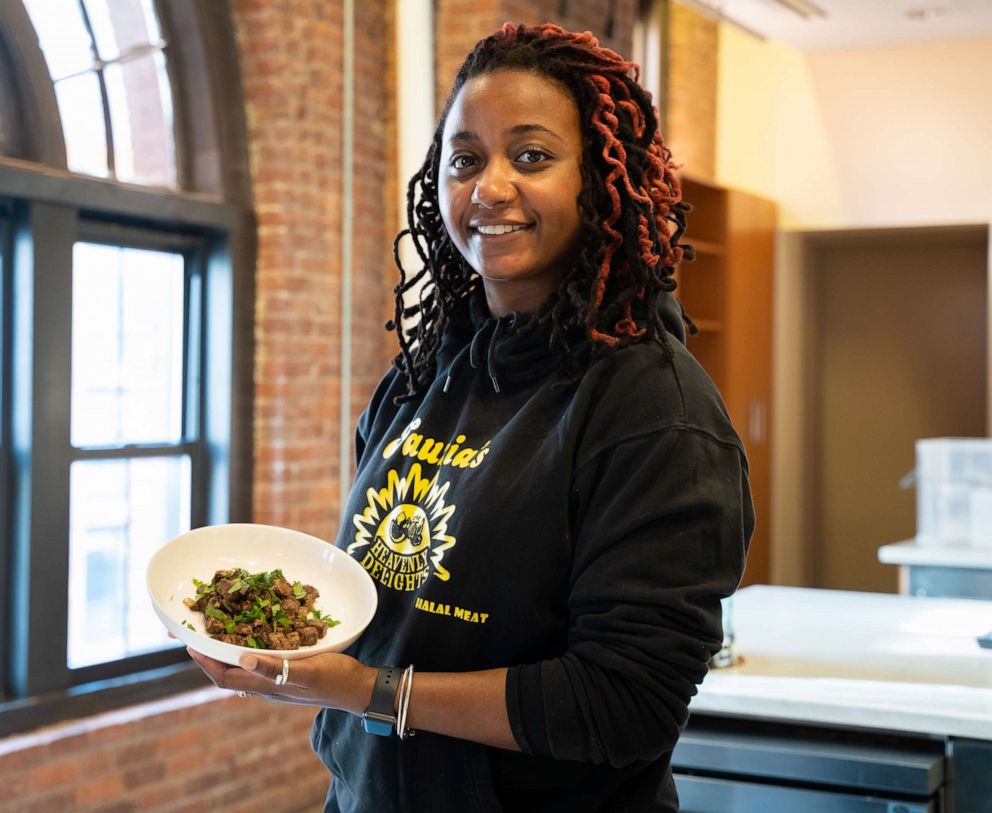 Hot Bread Kitchen
Fauzia Aminah Rasheed, the second-generation owner of Fauzia's with a bowl of their famous Jamaican jerk tofu.

Working alongside women in their training, classes, mentorship and experience at Hot Bread Kitchen also gave Rasheed and her mom a greater sense of belonging in the culinary industry.

Inci Mayo's success at Hot Bread Kitchen in 2014 has led to longevity in baking. She landed a job on the bakery team at Whole Foods Market, took additional classes through the program with experts like Jeffrey Hamelman, and tirelessly pursued her new passion for pastry to eventually become the head baker at Restaurant Associates with Google. 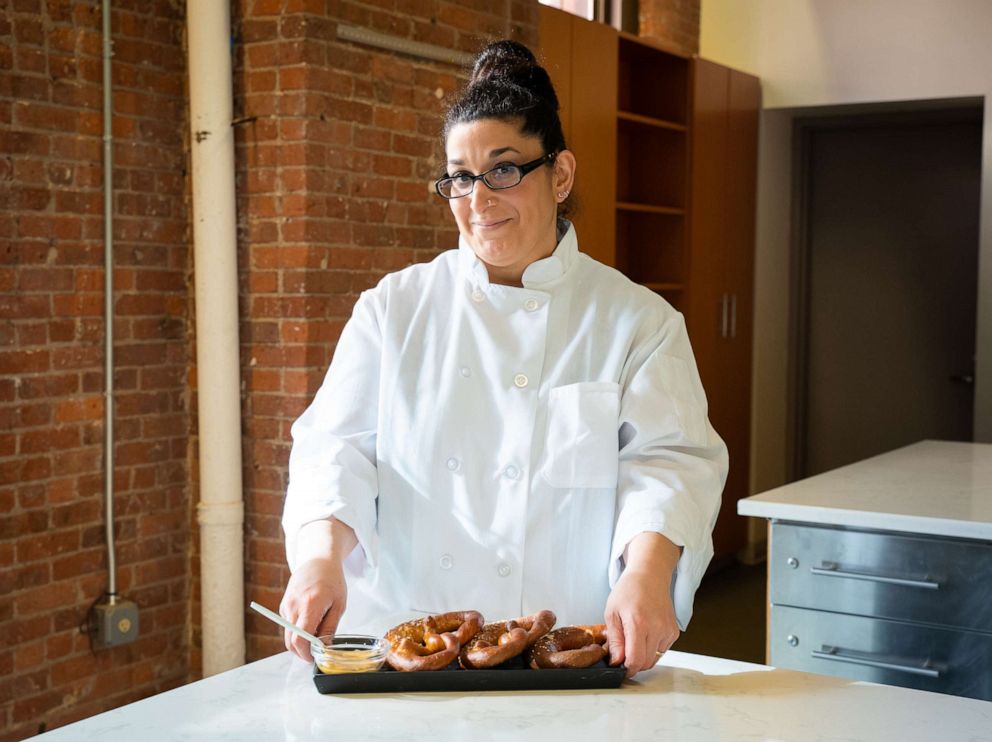 "I took almost every opportunity they had," she said. "My goal was to switch from bread only to the whole spectrum of pastry -- I love the creative part of baking."

As a German immigrant whose parents are from Turkey and family is still spread throughout Europe, Mayo said, "I didn't find a good job when because my English wasn't fluent when I got here eight years ago."

"I appreciate Hot Bread Kitchen because I got the opportunity to take ESL classes [English as a secondary language] that was really helpful and a big support. I didn't only learn how to make bread," she said. "Hot Bread Kitchen showed me career opportunities that I didn't think I was able to do by myself. I was at home baking every day and my husband said, 'why don't you do this as a profession?' But I couldn't afford the culinary arts school -- then I saw Carla Hall on 'The Chew' talk about [HBK], which was really fortunate for me."

I want to let other women to know that it's a real game changer. You can really change your life.

The organization also provides its members with resources for part time work, childcare and education, plus during the pandemic pivoted to create additional online resources and networking opportunities.

"Now, eight years later, I've created everything from a cookie to a tart to a cake, from flatbread to pizza and almost everything," Mayo said. "I would like to move up and become a chef. In America I look up to people who can do the burden of being an entrepreneur with all kinds of skills and a plan to survive. When I do it, I want to be really ready with the management skills, people skills and financial skills. That is the dream."

"I'm really grateful for the opportunities and the platform they've given women like me," Mayo said. "I want to thank Hot Bread Kitchen for always thinking of me and I want to let other women to know that it's a real game changer. You can really change your life."