This Thanksgiving I'm thankful for FaceTime, the one New York City grocery store that had poultry seasoning in stock, and my mom who helped me recreate a taste of home for the holiday.

Like so many others amid the pandemic, I can't be home with my family to celebrate the food-filled holiday this year. 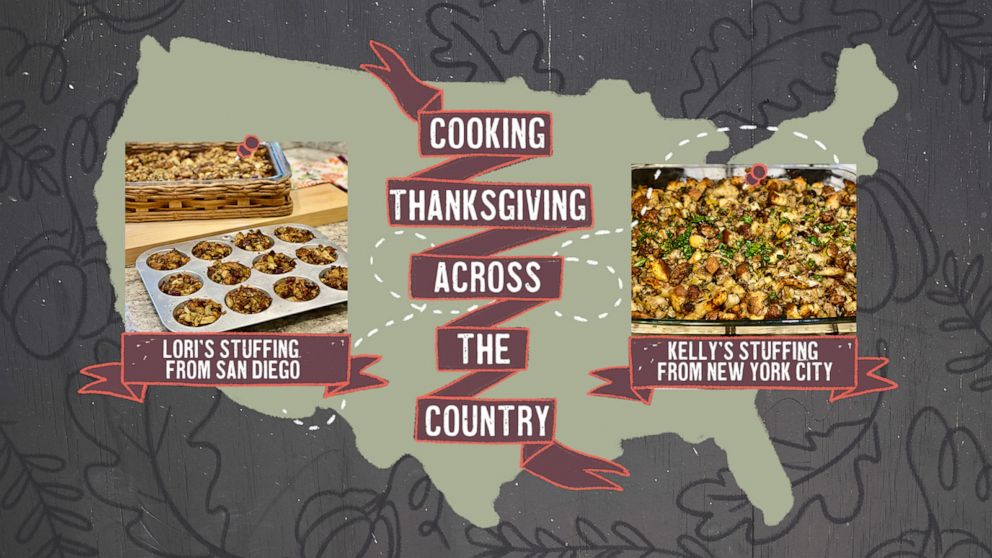 "It made me sad that we're not going to get to be with as many people. But it was also kind of comforting to know that we’re both gonna have this one dish that’s the same on Thanksgiving to be able to at least share part of the meal together," my mom told me. "It brought back such fun memories of so many wonderful Thanksgivings that we’ve had as a family."

Now that my eyes are finished watering -- from chopping leeks, and definitely not from missing home -- here's what she had to say about the recipe and her guidance as we cooked through it together. 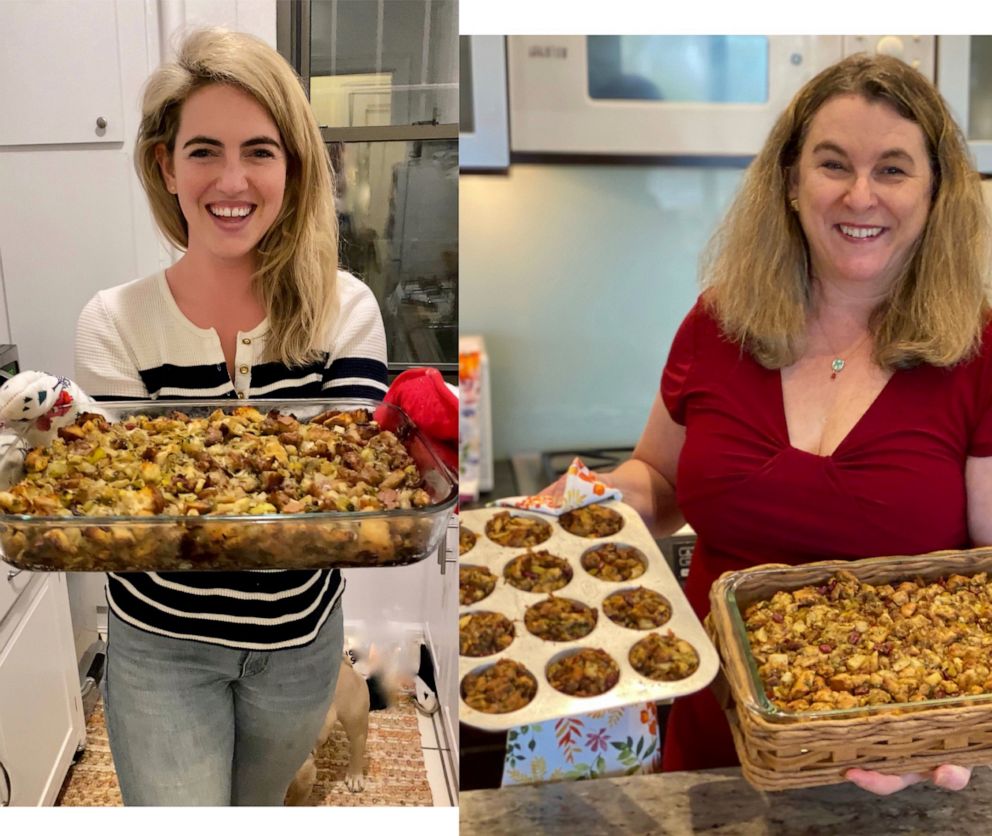 Katherine McCall, Dan McCarthy
Kelly McCarthy and her mom Lori McCarthy both prepared a family stuffing recipe for Thanksgiving from across the country.

"I've been making this recipe for over 25 years and I keep going back to it cause it's a crowd pleaser," she said. "My stuffing is my favorite Thanksgiving dish because not only is it delicious, but it brings back so many wonderful family memories." Same Mom, same.

Recipe and prep for successful stuffing 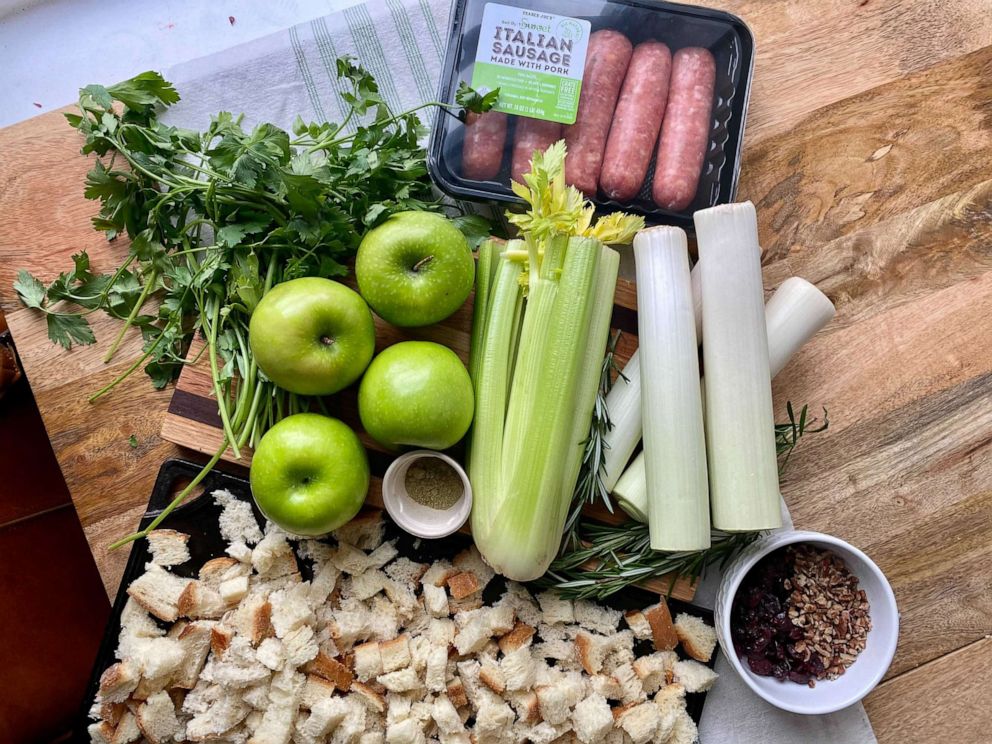 She emailed the latest iteration of the recipe that has her handwritten little reminders of things she's added or omitted since first adapting it from a recipe by Bon Appetit.

"Every year when I make it, I try to take notes about what I did right and what I would do differently to make it better next time," she said. "You have to be willing to adjust the recipe and over time you get a feel for the texture it should be when you’re putting it into the pan."

Next, I took note of all the delicious food I needed and went to the grocery store to assemble my arsenal of ingredients. 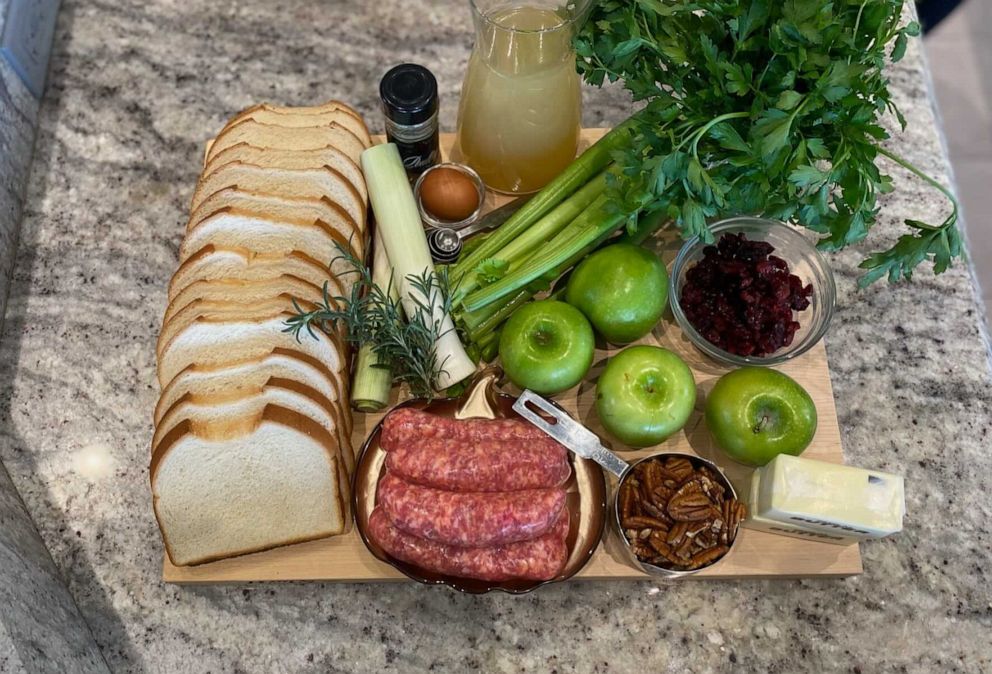 "Get fresh sweet Italian sausage, it makes it extra savory and some of the spices from the blend come through so nicely with the other herbs in this recipe," my mom suggested on the phone. "You'll need a white bread that has a little bit denser texture, but isn't too crusty like a baguette and not too fluffy like Wonderbread."

While she said I could get frozen leeks, I opted for the fresh, pre-trimmed option and grabbed an extra because I love the flavor and didn't want to risk not having enough. Celery, parsley, rosemary, green apples, low-sodium chicken stock, dried cranberries, pecans and butter rounded out my cart, and I was off.

After walking home -- up five flights of stairs -- and assessing the haul, I realized I still needed poultry seasoning. I went to four more stores and after I finally secured the last spices, had all I needed to get cooking.

Note: I decided to cut the recipe in half for my own eating endeavors and my mom opted for the full amount, baking hers in two different dishes -- one glass casserole dish and one standard muffin tin. 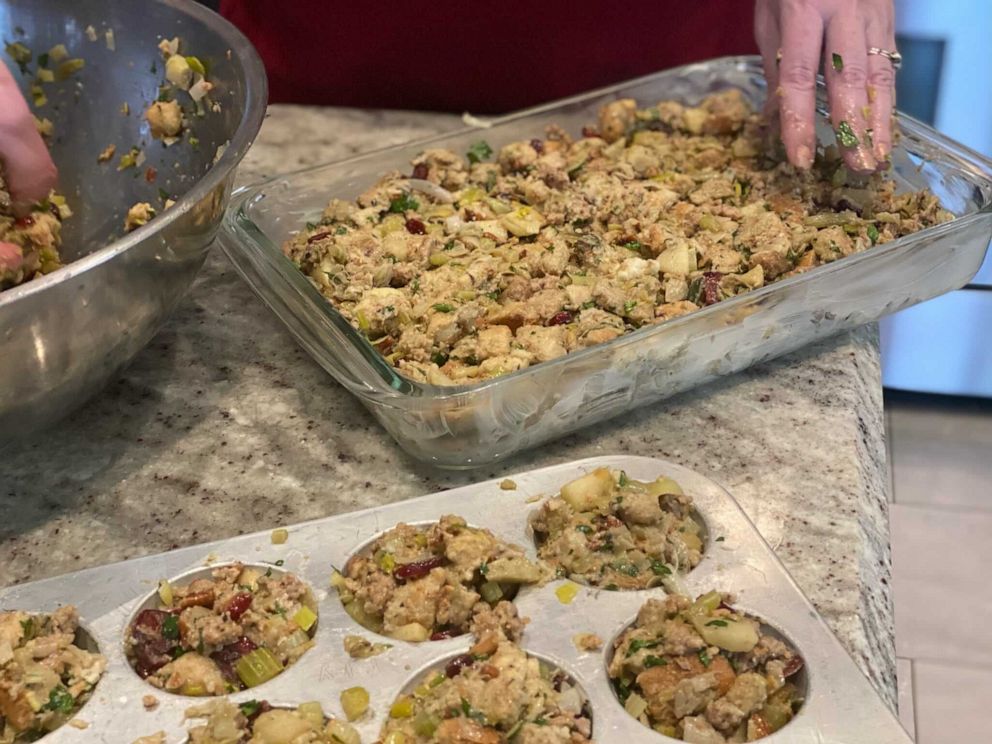 "One year I was looking through my cabinet and since I didn't have another casserole dish, I just grabbed a muffin tin," she said of the initial choice to try it, which has since become a preferred method in our family. "People love the crunchy edges the best and this is perfect because it's crusty all around. You still get some of the moist interior, but especially if you put gravy on it you really want the crunchiness."

Bonus, the individual size also makes it a perfectly portioned piece and is perfect for easy serving.

We both prepared our cooking vessels with a coat of butter to ensure those delicious crispy edges, plus it makes cleanup quicker. 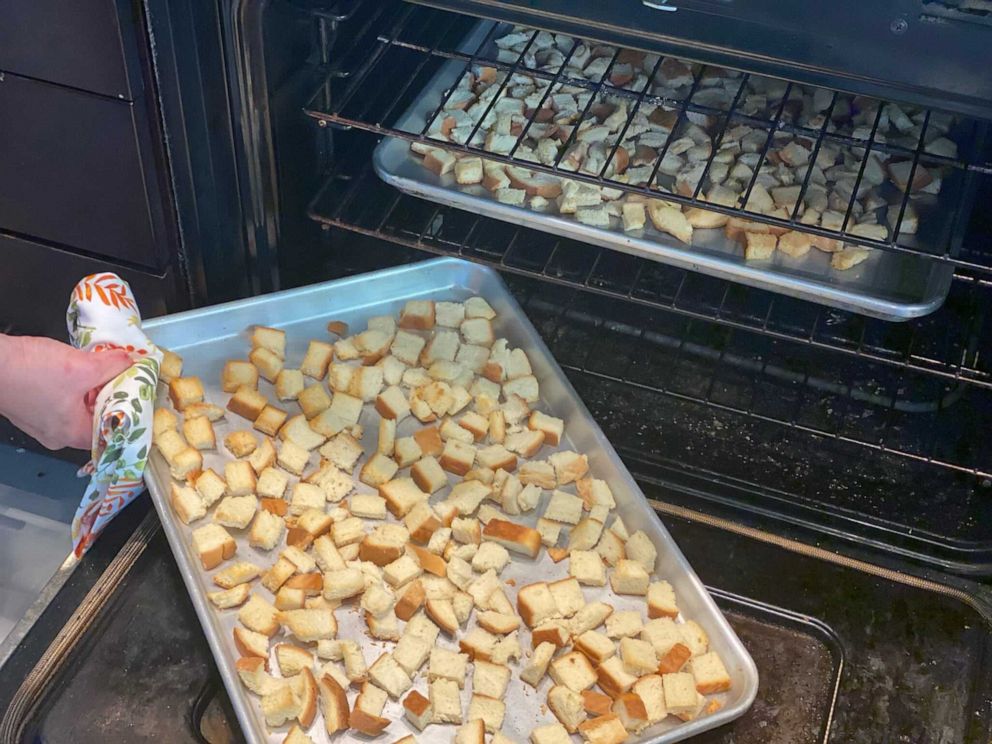 We both diced and toasted our bread first because you can let it sit; "plus, then the oven is already warm for when you're ready to bake the stuffing."

Next, I peeled and diced my apples, chopped my other veggies and fresh herbs while my mom started sautéing her sausage. 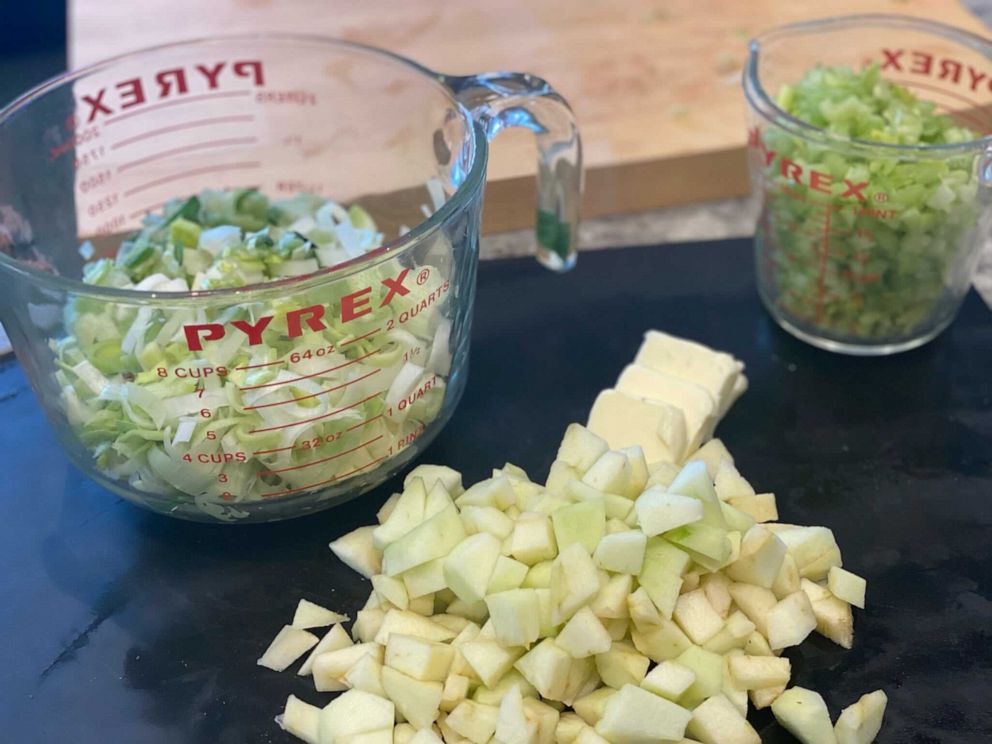 "I wish I had really chopped everything in advance," she admitted. "I started chopping while the sausages were cooking, and I didn't finish in the time it took to cook the sausage so it sat in the bowl for a little while waiting to have the other ingredients stirred in."

After a quick but important reminder on the importance of mise en place, especially for holiday cooking, she showed me a trick to easily crumble sausage into a pan. 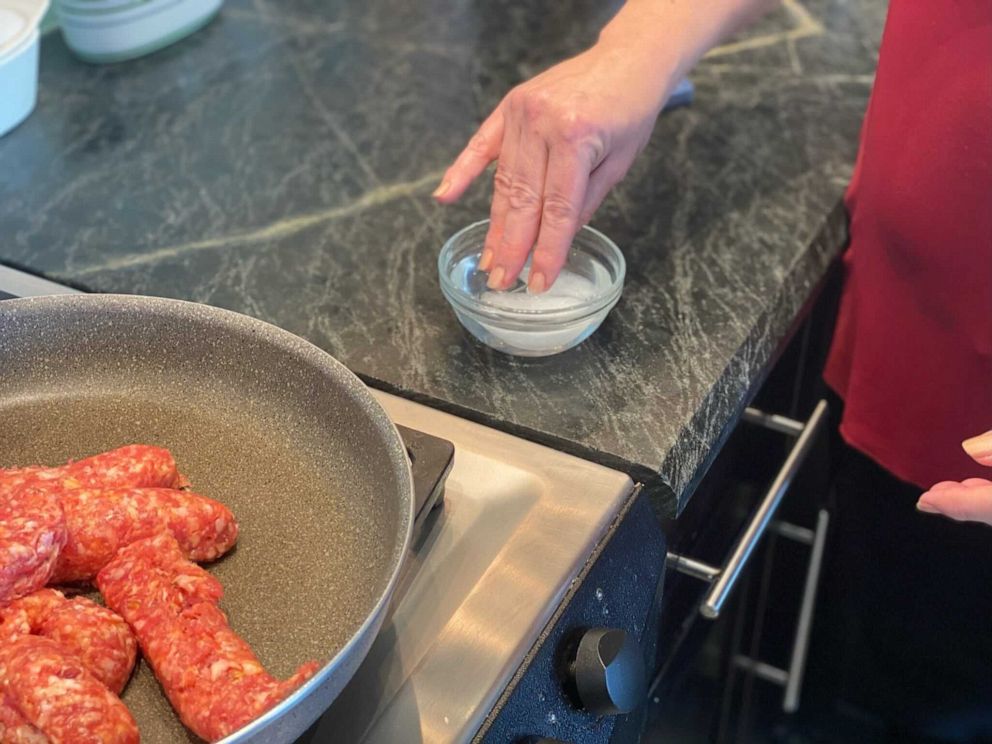 Lori McCarthy
Use ice water to stop sausage from sticking to fingers while crumbling it from the casing.

"When you're crumbling the sausage out of the casings, it sticks to your hands and you're kind of flicking your wrist trying to get it off," she said with a laugh, "but if you keep dipping your fingers in ice water it helps the sausage from sticking to your hands."

Cranberries and pecans can be divisive additions to stuffing recipes and thus are optional here, but we both added them for sweetness and crunch. However in a much more pro move, my mom sliced her dried cranberries "so that way you're not getting a whole big cranberry, just a nice small sliced piece."

"My favorite step is when I'm sautéing the leeks, apples and celery with the poultry seasoning, because that's when it really comes together and the scent really blooms. It just comes to life and immediately smells like Thanksgiving time to me," she said of the fresh and savory aromas. 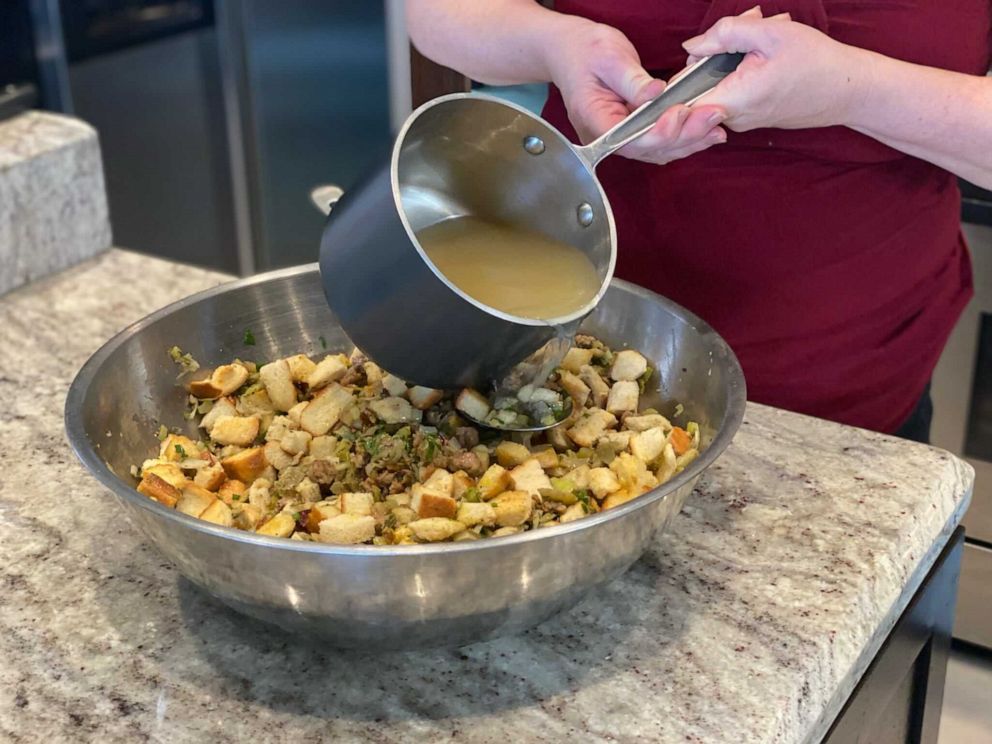 Lori McCarthy
The warm butter and chicken stock get mixed in with the stuffing ingredients.

Once we both assembled our prepared dishes, they went into their respective West Coast and East Coast ovens.

I baked mine for 20 minutes, turned it around 180 degrees for an even bake and let it continue for an additional 20 before taking the foil off the top to crisp up for the final 15 minutes. 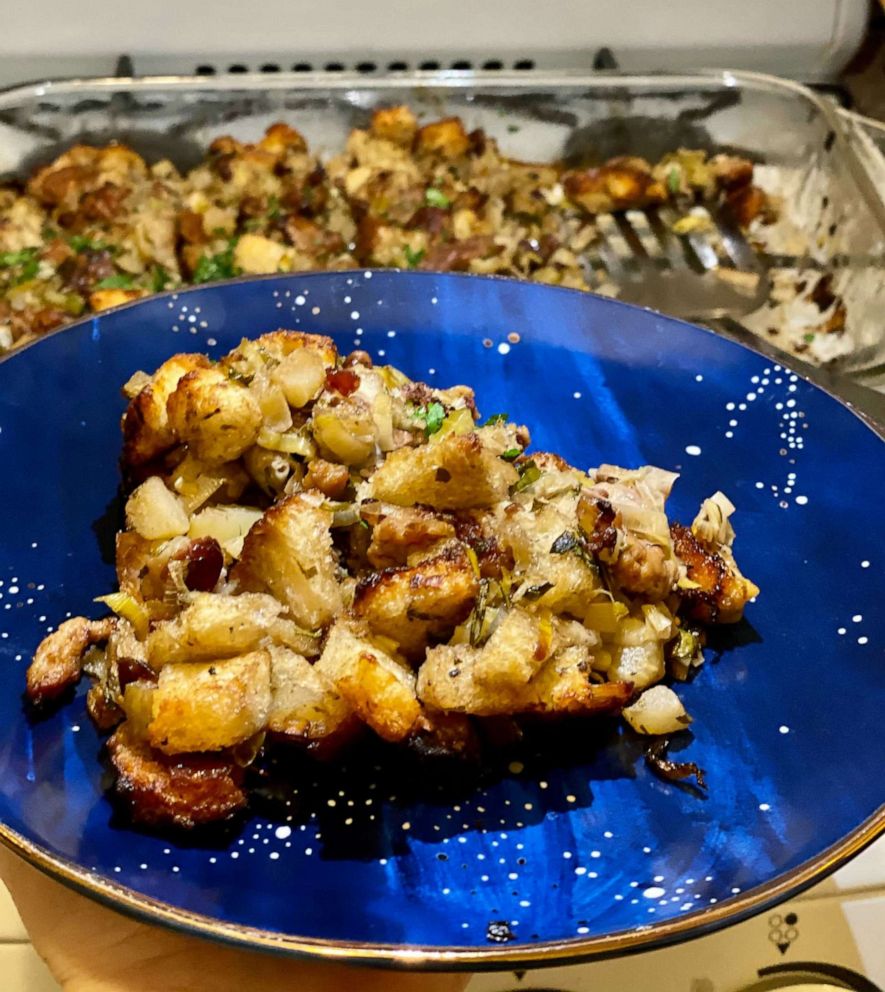 Kelly McCarthy
A serving of stuffing on a plate in a New York City apartment.

Once both our kitchens smelled like Thanksgiving, it was ready to let them cool and taste test our results.

"I can't even wait for this to cool," my mom laughed as she took a bite of one of her stuffing muffins. "It tastes as good as I remember and it's so nice to have a recipe in your repertoire that you know is consistently good. Even if I mess up -- it's still tremendous." 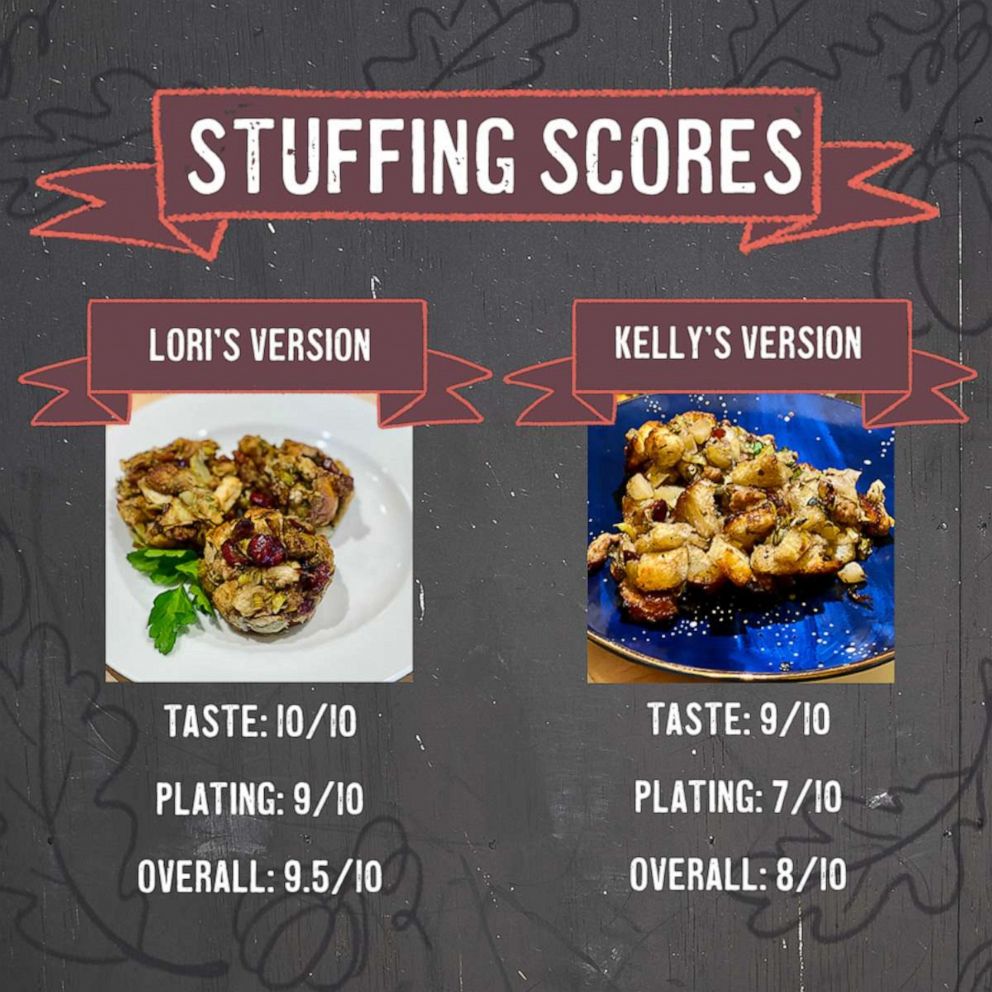 Overall I wish I had used muffin tins too for cuter plating, but the overall taste and technique helped me eke out an 8/10 self assessment on how mine stacked up to my moms. 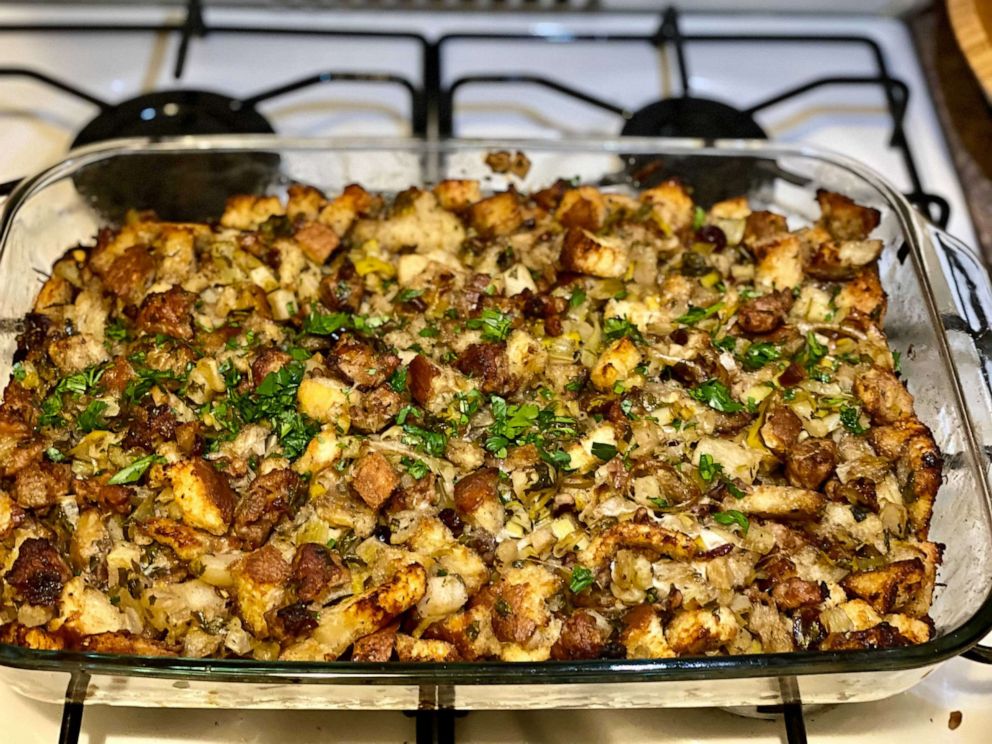 Kelly McCarthy
Kelly McCarthy recreated her mom Lori McCarthy's stuffing recipe for Thanksgiving to have a taste of home.

Hers earned high marks and praise from my dad, brother and sister-in-law who all reaped the benefits of taste testing. She missed a partial point on execution, but still notched a near perfect 9.5/10.

Check out my mom's full sausage, leek and apple stuffing recipe below 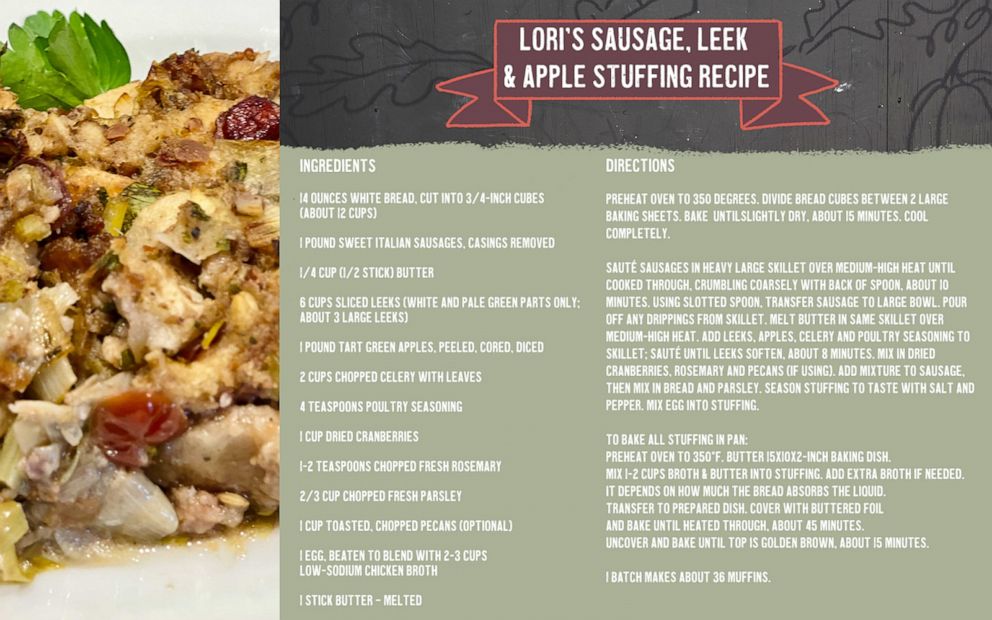 Bonus, if you do make a full batch and miraculously have any leftovers, Lori shared some awesome ideas for what to do with them. 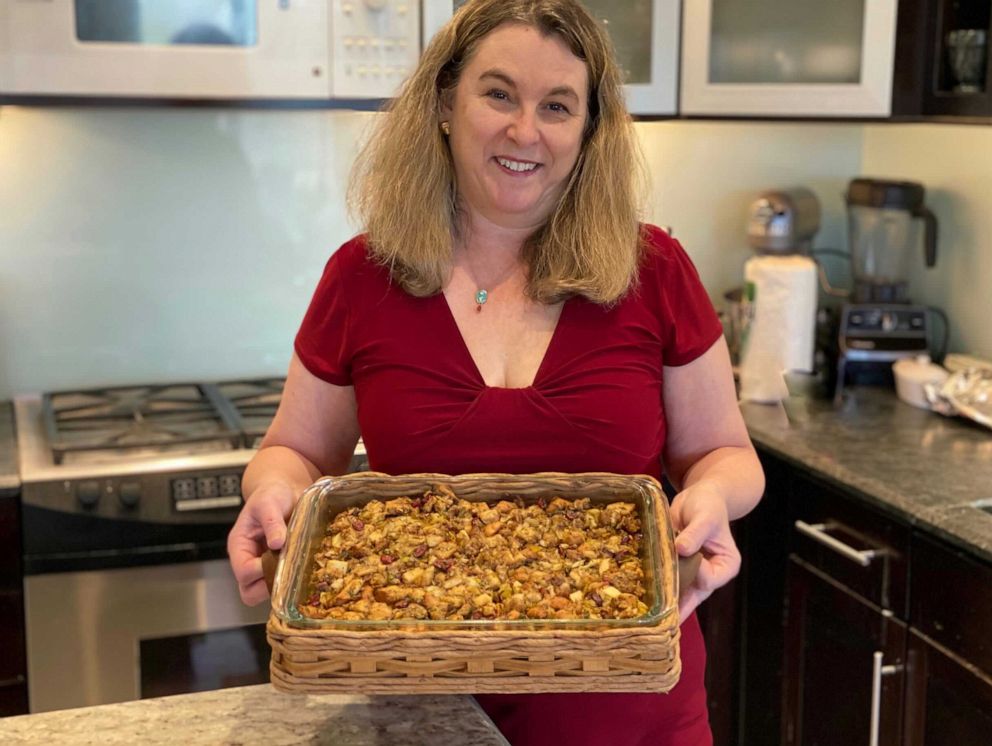 "If there's one leftover I want after Thanksgiving, it's my stuffing, and I've come up with so many creative ways to use the leftovers," she said. "I'll take a little bit of stuffing and fill it in a mushroom cap and it's like instant stuffed mushrooms. Plus, it's super fast to make. I've heated up a block of it and put a fried egg on it almost like a hash. You could totally turn it into a strata -- a bread based egg custard bake -- in fact I'm going to do that this year."