Beverly Mylek and Brenda Sutton, two adventurous grandmas, took to the sky together to check an item off their bucket lists: jumping out of planes from more than 13,000 feet.

"I just like something exciting and I've not done too many exciting things so it sounded good," said Mylek, 78, of Toledo, Ohio. "This will be something I'll never ever forget ... if I make it!"

For Mylek, fulfilling this skydiving dream comes after a lifetime of hard work. Mylek owned a comfort food restaurant called Bev's Kold Keg in Swanton, Ohio, before it folded. She ran the business and kept her family afloat for decades after her husband experienced a brain aneurysm and could no longer work.

Sutton had different reasons for taking the plunge: She wanted to be pushed out of her comfort zone. As a teen, she said she always wanted to go skydiving but never had the opportunity.

"I've been in denial for a couple weeks, and now it's here so I guess i'm going to really do it!" the 78-year-old said before the jump.

Neither Mylek nor Sutton appeared nervous on the clear, sunny day in July. Both were excited to finally do something different.

(MORE: 83-year-old grandmother wins hearts as the flower girl at her granddaughter's wedding) 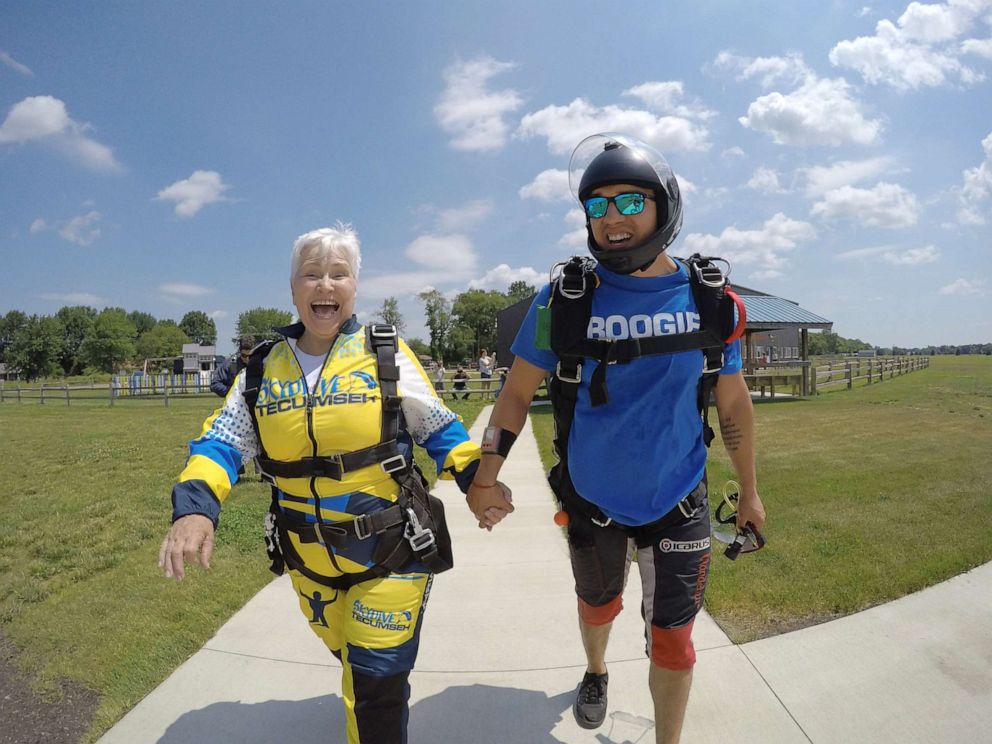 Skydive Tecumseh
Beverly Mylek, 78, walking to the plane she will jump from momentarily.

Helping seniors with their bucket lists

Both women completed their wishes through MyJump, a nonprofit that helps seniors achieve what's left on their bucket list.

Founder Webb Weiman said he was inspired to start MyJump when he witnessed his widowed father refuse to leave his bedroom after his wife passed away.

"I wanted to prove to him that there is life beyond the rocking chair and inspire others living in isolation that it's never too late to achieve your dreams," Weiman, 57, said.

Weiman helped his dad secure a date that led him to a new marriage and a new happy life.

"One of the things we've always taken pride on is helping guide seniors from the darkness to the light," Weiman told "GMA."

(MORE: 103-year-old nicknamed the 'Hurricane' wins yet another gold in 100-meter dash')

Weiman said one senior, Louise Spencer, 92, wanted to drive an 18-wheeler to honor her late husband who was a trucker.

Weiman said he still receives thank you letters from seniors and their families.

"We see people not only coming out of isolation to fulfill their bucket list wishes but because of what they’re doing, they’re inspiring who they live with as well," he said.

Jumping out of isolation to improve health

A third of seniors are lonely and their loneliness could be affecting their health, according to the 2019 National Poll on Healthy Aging by the University of Michigan Institute for Healthcare Policy and Innovation.

Erica Solway, the co-director of the poll and a social science researcher, says more than 25% of the poll's respondents said they had social contact once a week, or less.

"These results indicate the importance of proactively reaching out to those in your community who may be at risk of feeling isolated and disconnected, especially those with or at risk of health issues," Solway told "GMA."

Weiman said everyone should have a bucket list and that there's no such thing as a bad bucket list item. He also hopes to reach people from all walks of life to achieve their dreams.