A petition that now has nearly 30,000 signatures and counting on Change.org was started by a simple online search.

Maria Beatrice Giovanardi, a London-based communications and marketing expert, typed the word “woman” into a search engine earlier this summer while looking up information on women’s earnings.

She said she was bombarded with results for synonymous of woman that included words like bitch, piece, bit, mare, baggage, wench, petticoat, frail and biddy.

“I was like, 'What’s going on? Why are these the synonyms?,” Giovanardi, 28, told “Good Morning America.” “I don’t see myself like this as a woman.

“My girlfriends don’t speak like this so it’s a man’s point of view,” she recalled thinking.

Giovanardi learned the information about the word "woman" she saw online came from content produced by Oxford University Press, a department of the University of Oxford in the U.K. that also produces the Oxford English Dictionary (OED).

As Giovanardi looked further into it, she saw more examples of what she described as sexist language, including using sentences like these as examples alongside the definition of women: "‘One of his sophisticated London women"; "Don't be daft, woman!": and "he wondered whether Billy had his woman with him." 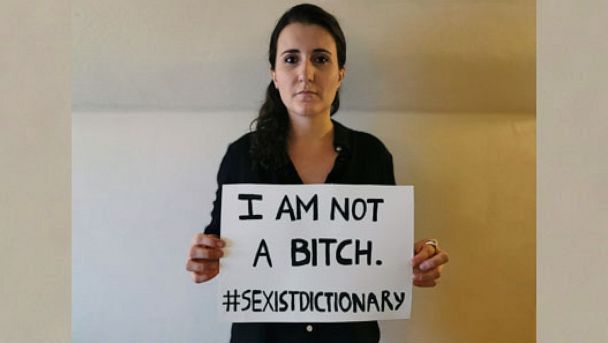 Since June, the petition has drawn 29,926 signatures and counting.

"One of our goals was to have as many signatures as the Oxford student body, which is around 24,000 students, so we achieved that goal," she said. "But the more pressure the better so we hope to get more and more."

The petition has already caught the attention of the Oxford University Press, which dedicated a blog post to responding to the petition.

The post specifies that the content around women called out by the petition comes from the Oxford Thesaurus of English and the Oxford Dictionary of English, which "aim to cover contemporary English usage and are accessible online in a variety of formats." 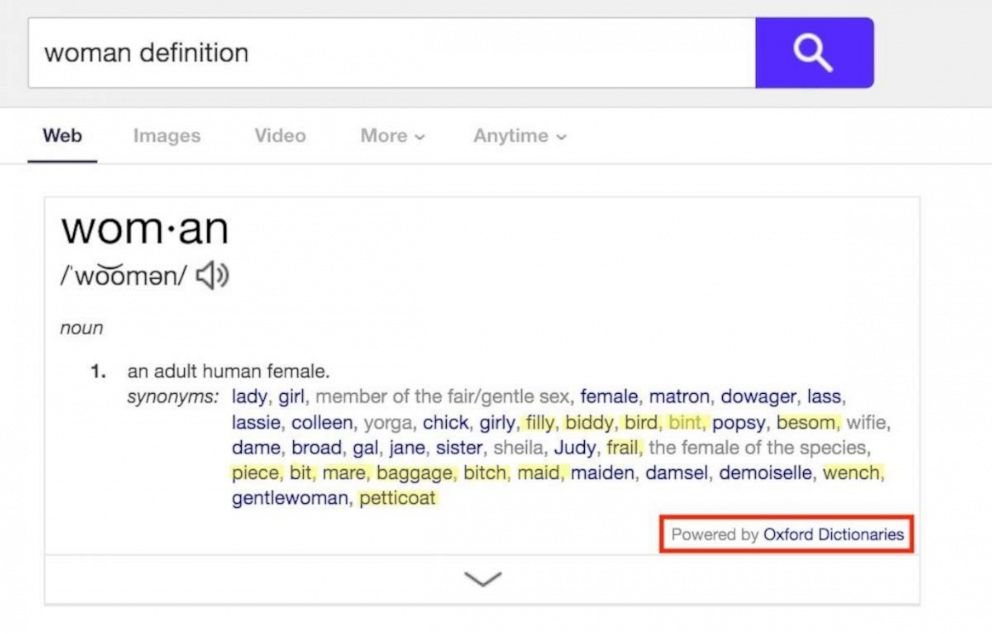 "These texts are based on the methodologies of descriptive, corpus-based lexicography, meaning that editors analyse large quantities of evidence from real-life use to determine the meanings of words," the post explains in part. "If there is evidence of an offensive or derogatory word or meaning being widely used in English, it will not be excluded from the dictionary solely on the grounds that it is offensive or derogatory."

Oxford University Press also told "GMA" in a statement Thursday: "Our dictionaries strive to reflect, rather than dictate, how language is used. This is achieved by using an evidence-based approach, drawing on vast collections of written English from books, magazines, journals, and other digital sources."

"Our editors analyse these collections to determine how real people use English in their daily lives," the statement read. "In cases where words or senses are considered offensive, they are clearly labelled as such."

Giovanardi's petition definitely started a conversation, which is what she told "GMA" was one of her goals.

(MORE: #NotWorthLess highlights the battle for equality behind the scenes in Hollywood)

One woman, who identifies herself as a feminist and a linguist, took to Twitter to explain why she didn't sign the petition.

"Lobbying dictionaries to make their definitions fit your political preferences is misguided," she wrote.

This was actually a pretty throwaway suggestion at the end of a long list of other demands. But even if it hadn’t been, the anger about it is misplaced. Lobbying dictionaries to make their definitions fit your political preferences is misguided—(which is why I didn’t sign)/2

Giovanardi said she plans to keep up the "pressure" with her petition because, for her, Oxford University's reply was not enough.

"Our point is that sexism against someone is not acceptable and it is not okay to have definitions like these about women," she said. "We also want them to remove the sentences that denote women being the property of men, and there’s a lot of them,and make it more inclusive."

And even people who may not sign the petition should walk away from the debate asking themselves questions, according to Giovanardi.

"I hope people ask themselves if are we doing enough to patrol sexism and see how widespread it is and ask if we are we taking it seriously enough," she said. "Because it’s very embedded in every part of society."