When Stella Lackey, 2, looks at Bean the Elf, her Elf on the Shelf doll, she sees an elf that looks just like her.

Bean the Elf uses a purple wheelchair and uses pink ankle-foot orthoses, just like Stella, who has spinal muscular atrophy (SMA), a genetic disease that affects her motor function.

And when Bean the Elf does different activities through December, he does things that Stella does, like going rock climbing at occupational therapy and using a nasogastric tube, which carries food and medicine to the stomach through the nose. However, Bean the Elf's tube is filled with hot chocolate. 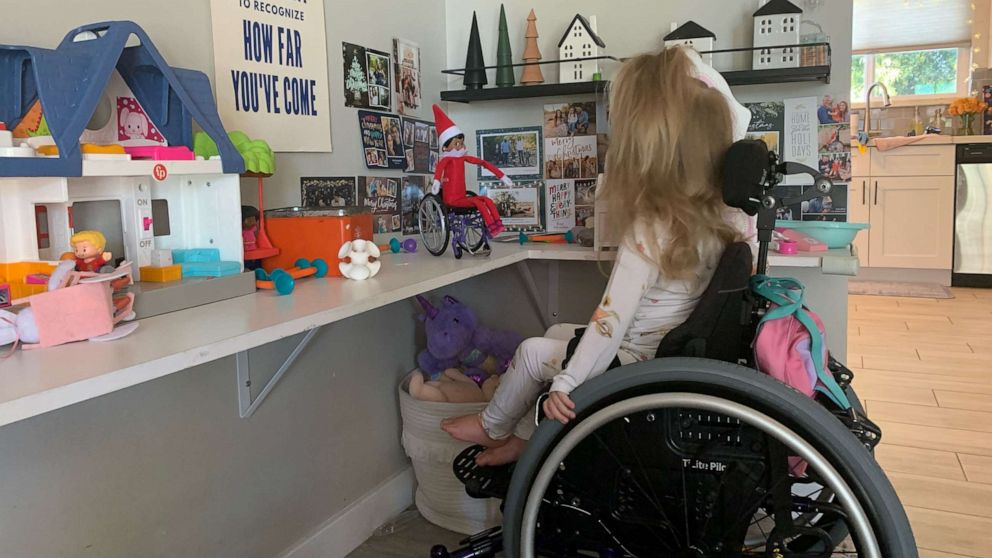 It's all thanks to the creativity of Stella's mom, Samantha Lackey, who said she wanted to make sure that everything her daughter saw in Bean represented herself.

"I don't think she even second guesses that the elf is in a wheelchair because that's just what she's so used to," Lackey, of Phoenix, Arizona, told "Good Morning America." "For me to be able to mirror this little elf with her personality, I think she truly appreciates it."

Stella was diagnosed with SMA as a 1-month-old and received her first wheelchair, which she calls "wheel wheels," at 9 months old, according to Lackey. 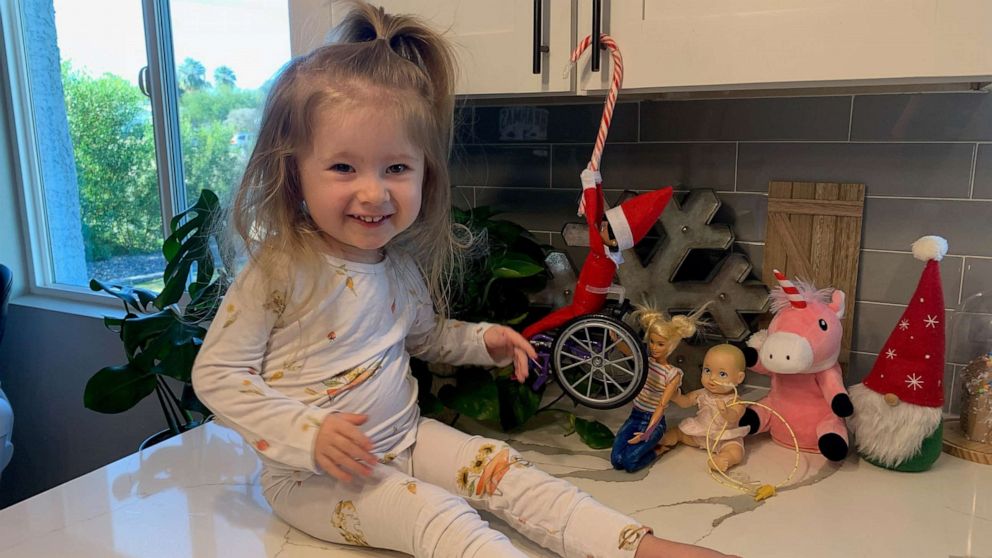 She said when she and her husband gave Stella her first Barbie doll, who also uses a wheelchair, they saw her confidence grow. Since then, they have made even more of an effort to make sure Stella is represented in the toys she plays with and the types of books and shows she sees.

MORE: Girl with cochlear implants gets classroom elf just like her

"As a mom, I was worried about how am I going to relate to my child. I don't have a disability, I unfortunately never had relationships with disabled people growing up," Lackey said. "So to see her truly appreciate how much representation can mean, it was a no-brainer."

Lackey shares the antics of Bean the Elf on Instagram with the hope it helps other families have conversations about people with disabilities.

"Yes this is a silly little tradition that I am doing for my daughter for the first time this year, but I truly hope that it starts a conversation that we find really hard to have with our kids," she said. "Having a conversation about seeing someone in a wheelchair or seeing someone use a mobility device, it's hard for us as parents when we've never had to have these conversations before, so if you can start it with Elf on the Shelf, why not?"

Lackey continued, "I think bringing inclusion and normalizing disability is going to only make our kids a little kinder when they see someone with a disability."

In 2019, more than 2.5 million households in the U.S. were estimated to have at least one child in the home with a disability, according to the U.S. Census Bureau.

Lackey said she remembers one incident at a doctor's office that taught her the importance of talking with kids about different disabilities. In the moment, Lackey said she overheard a young girl asking her mom why Stella was in a wheelchair.

MORE: 'Son of a nutcracker!' This Elf-themed room is the 'sweet' your holiday needs

The mom encouraged the girl to go talk to Stella, who was too young to talk at the time, so Lackey said she stepped in.

"We make it a lot harder on ourselves," she said of parents. "If we start with small conversations, whether it be Elf on the Shelf or inclusive toys or a character in a book that they see, or on their favorite TV show, that's just going to help a future generation be inclusive and be kind and be good humans."