Holiday shopping is underway and retailers have already started offering additional sales and discounts earlier than ever in an attempt to win over consumers, who are facing near-record high inflation this season.

With 73% of consumers expecting higher prices this holiday season, many are planning to buy fewer gifts compared to last year, according to a recent holiday retail survey from Deloitte.

"Inflation is at the top of every consumer's mind. In fact, we did a study with Oracle that said that around 77% of consumers are thinking about inflation when shopping," Hitha Herzog, chief retail analyst at The Doneger Tobe Group, told ABC News. "Retailers know that there are less dollars that are going around and less chances for them to sell to the consumer so they're going to be very specific about making sure that the consumer shops with them."

One strategy to win over shoppers? Convenience. Aside from prices, another major indicator consumers cited as a top factor for whether or not they will shop in-store this season is checkout speed, with 41% of shoppers listing it as important, according to a holiday consumer survey by Sensormatic Solutions.

The department store Neighborhood Goods recently adopted a new method of checkout called POS Go, a point-of-sale device by the e-commerce platform Shopify that allows customers to pay from anywhere in the store. Previously out of reach for most brands, it's something that Shopify has recently made available to the tens of thousands of small businesses that use its platform, and consumers will likely start to see it popping up more and more inside their favorite stores.

“The modern consumer is more hybrid than ever." Harley Finkelstein, Shopify President told ABC News. "Commerce happens everywhere, and as we head into the busiest season for our merchants, they need technology...that gives them the flexibility to meet consumers however and wherever they like to shop.”

MORE: Black Friday and Cyber Monday are on the way: Here's what to know

"We're bringing it to all of our locations now. And I think what's been really important about it for us is that we've always believed from a philosophical perspective that the customer ought to be able to dictate their own terms as to how they shop," Matt Alexander, co-founder and CEO of Neighborhood Goods, told ABC News. 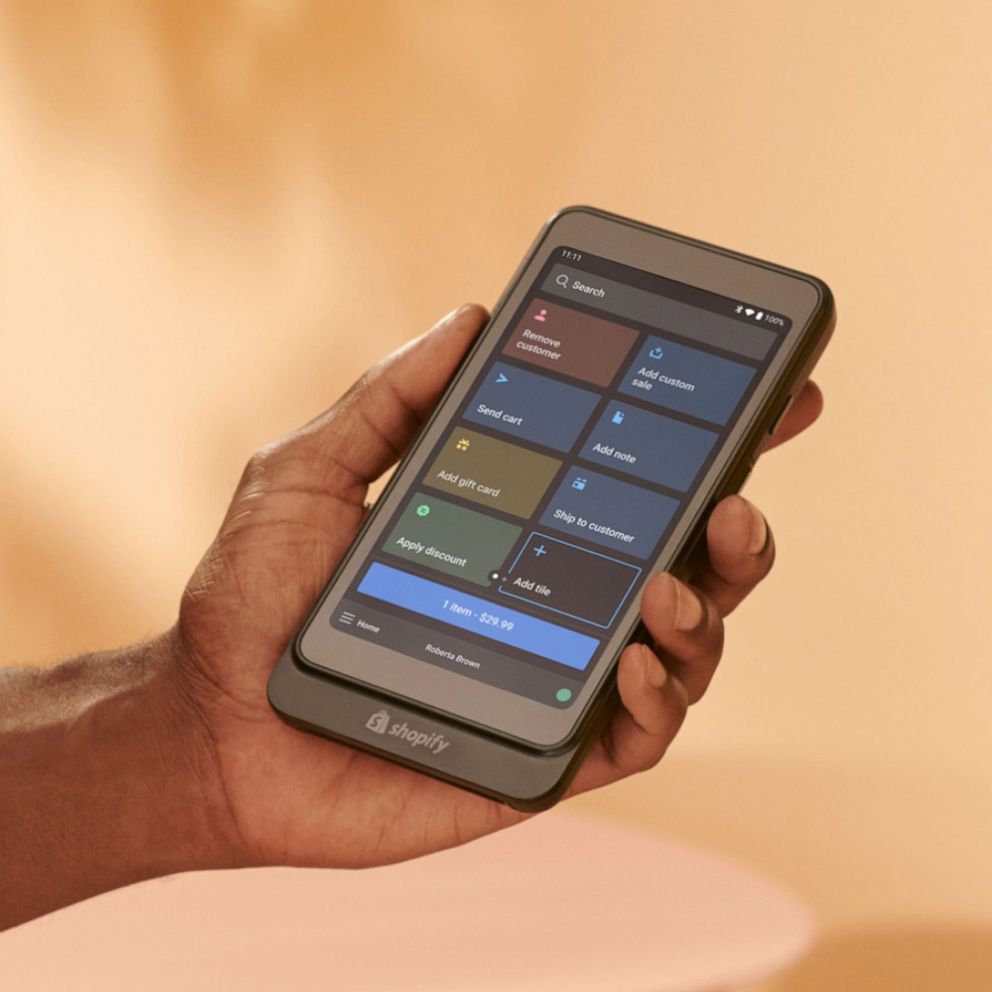 Shopify
Thousands of retailers are offering a new way to pay with Shopify's POS Go.

Brick-and-mortar stores aren't the only ones making the shopping experience more seamless. Online retail giant Amazon recently announced that it will be offering Venmo as a payment option, and the Buy Now Pay Later (BNPL) market has become one of the fastest-growing alternatives to credit cards in the last few years. Used by hundreds of thousands of businesses, it allows consumers to pay off a purchase over a designated period of time, typically interest-free.

The number of BNPL loans in the United States grew from 16.8 million to 180 million -- more than 970% -- from 2019 to 2021, according to a September report from the Consumer Financial Protection Bureau.

"One of the biggest issues for retailers is cart abandonment and having that change of heart when you're in the store," Herzog added. "If there are different places to pay for things … and different methods to not abandon that cart as you are online purchasing … that will ensure that the retailers are selling the product and that the customer is having a great experiencing experience purchasing the product."

Alexander built Neighborhood Goods with customer experience in mind, offering restaurants, refreshments and events in store for consumers to make the shopping experience unique and more enjoyable. He said the company wanted to create "a sense of magnetism to give people a really good reason to come in."

"Even in the event of a recession, people still shop," he said. "It's just they're more considerate about where they do so. And so if you can offer a really great experience, that doesn't go out of style regardless of what's going on in the world."