In many cases, dogs are not just man's best friend, but also their heroes.

This is especially the case for first responders and war veterans who recently received a service dog and a new chance at life, thanks to the program Puppies Behind Bars, which has inmates raise dogs for the recipients.

An emotional ceremony for the organization took place for recipients and inmates at the Bedford Hills Correctional Facility for Women in Westchester County, New York, in August.

Five new dog owners, including Jeanne Meyer, a retired Air Force colonel, smiled down at their new pups, who had just received their doggy diplomas for training as service dogs.

"It's pretty phenomenal to be walking away with this partner for the rest of my life," Meyer, who served for 25 years, told "GMA" about the special ceremony.

ABC
A first responder salutes his new dog at the Puppies Behind Bars graduation ceremony.

The organization has instructors who teach in seven correctional facilities in New York and New Jersey, and approximately 140 inmates participate in the program as puppy raisers.

"The dogs are trained in 92 commands, 10 of which are specific to post-traumatic stress," Gloria Gilbert Stoga, president and founder of Puppies Behind Bars, told "GMA."

Additionally, the dogs were trained to wake their owners from nightmares, dial 911 and help put first responders at ease when they experience post-traumatic stress in public spaces.

"I’d say that our dogs, because they’ve been raised in prison with people who need them, who are emotionally fragile, have a level of empathy that I don’t think exists in any other dog," Stoga told "GMA."

The puppies are eventually paired with a first responder or war veteran to help them on their new journey in life.

A new chance at life

Over the course of two years, the puppy trainers develop a close bond with the service dogs, starting when they are 8 weeks old.

"Training a dog that’s going to help somebody else, there’s no words to explain how that makes me feel," Rebecca Polomaine, a puppy trainer for Puppies Behind Bars, told "GMA." "That is my reward." 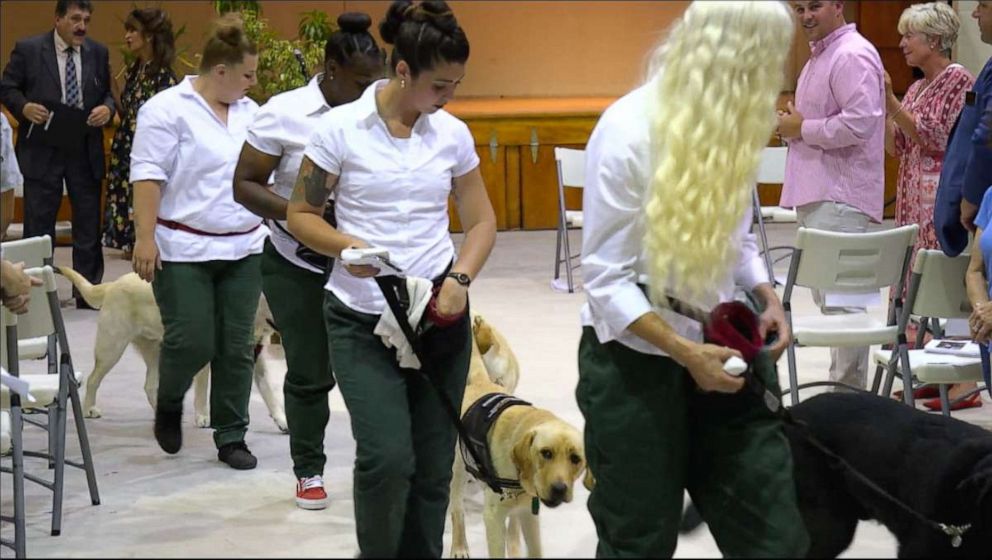 ABC
Puppy trainers from Puppies Behind Bars walking their dogs from the graduation ceremony at Bedford Hills Correctional Facility for Women.

"[The experience] taught me self-worth. It taught me to be comfortable in my own skin again and the joy of life no matter where I am," Polomaine said. "A lot of things are lost when you come into a prison, and the two puppies that I have had, what they’ve given me, is my life back."

"Every person deserves a chance, no matter the mistakes you’ve made," she added.

One woman meets her Angel

The feelings were mutual for Meyer, who received her service dog, Angel, through Puppies Behind Bars.

Angel was paired with Meyer to help her, since she has suffered from post-traumatic stress.

"I suffered my first trauma while deployed in Afghanistan in 2002, when I was sexually assaulted by allied soldiers," Meyer said in a speech at the Puppies Behind Bars graduation ceremony.

"By the end of January, I had lost nearly 10 pounds and could only sleep and [was] startled at every noise," she said.

The Air Force provided Meyer with a psychologist who was a contractor specializing in trauma. Meyer says she again was assaulted.

"He was the first person that I told about my experiences in Afghanistan. He used that information to repeat that sexual assault in the name of treatment," Meyer said in her speech.

"Sexual assault is a crime that is not tolerated in the Air Force," the Air Force said in a statement to "GMA." "When a charge is brought to our attention, we will investigate it promptly and if the allegations are substantiated, we will take the appropriate disciplinary action. In this case, the Air Force is pleased the contracted physician was brought to justice in the civil courts and one of our Airmen is being supported through the Wounded Warrior and Puppies Behind Bars Programs." 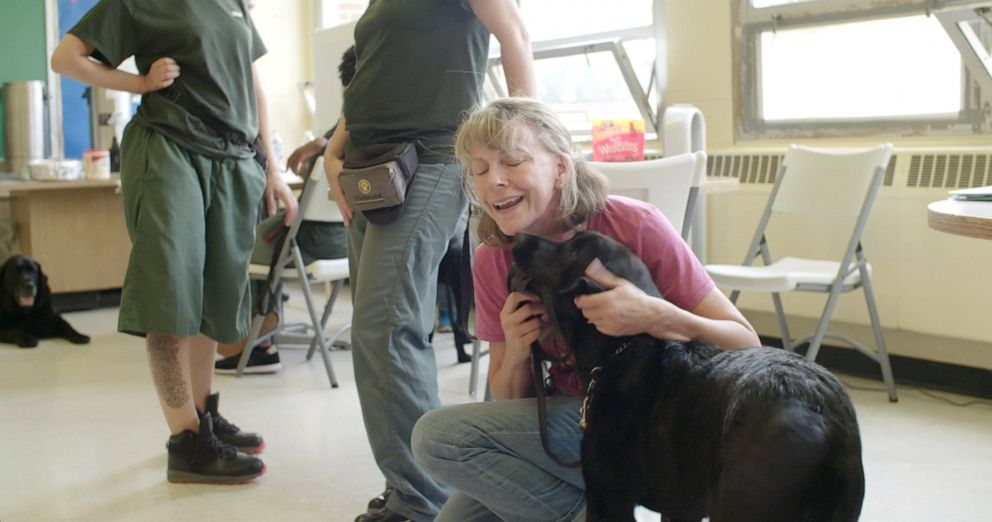 "As I struggled to breathe every day, these puppy raisers and PBB labored every day to train her, care for her ... and love her," Meyer said.

"I never thought I would be standing in a state correctional facility with a puppy, who was phenomenally trained by inmates, who's now going to be my partner," she added.

As someone who worked as a deputy staff judge advocate in the Air Force Space Command, Meyer’s experience with Puppies Behind Bars changed her perception after working with the inmates.

"We only saw the negative side of people in the courtroom, and when they would leave the courtroom and go off to prison, that was the end of our involvement with them," she said.

"So now, seeing the other side of it, and seeing these women who are committed to making their lives better within the structure they are given and their willingness to give of themselves to strangers they don't know, is amazing."

"Having a graduation in prison is full-circle for the women here," Stoga said.

"They get applause, which they never get in their lives, and for the 45 minutes or an hour of graduation, they feel and they’re treated like they’re human beings."

Meyer looked over at the puppy trainers with tears in her eyes during the graduation ceremony.

"You'll be in our hearts, and in our puppies, and we will never forget where they came from," she said to them.