As states begin to ease stay-at-home orders and some restaurants open their doors again, amid the COVID-19 pandemic, one generous customer in Texas left a $1,300 welcome back tip as a thank you.

The Frog & The Bull, an Iberian-inspired tapas restaurant, in Austin, Texas, reopened on April 30. Owner David Fernandez told "GMA" that a man and his family came in for dinner on May 1 and ordered a bottle of good wine, filet mignon and scallops. The check came out to $337, but then, the customer asked the server to double charge him on everything.

"I was waiting on the table for a couple hours and I was closing [the family] out and before I ran the card, the man pulls me aside and says, 'I'd like you to double our tab.' At first I didn't understand," the waiter, Josh Pikoff, 18, recalled. "Then he said, 'We're so thankful that you guys are open. We're very grateful that you guys would put yourself on the frontlines to serve the community.'" 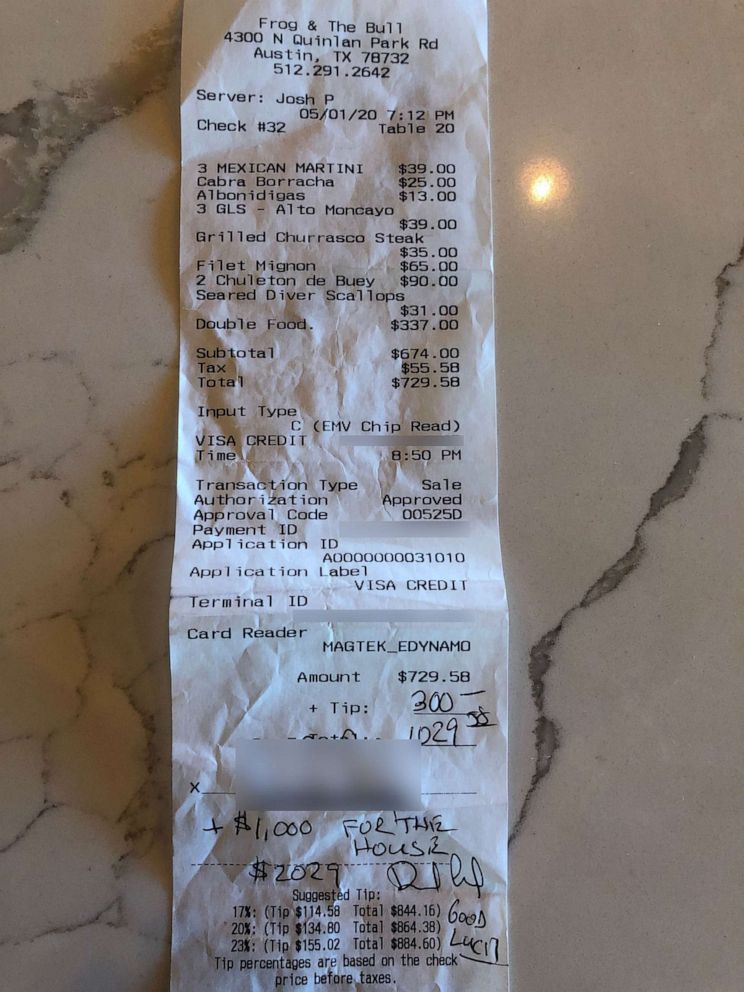 Courtesy David Fernandez
A generous customer left a $1300 tip, after asking to double-charge all food items, at a recently reopened restaurant in Austin, April 30, 2020.

Fernandez, 48, said his restaurant had been open only five months before he was forced to shut down operations on March 17, when stay-at-home mandates closed in-restaurant dining.

"We have just barely been surviving… We had to furlough most of my employees. We had to basically reinvent ourselves into a take-out and delivery service," he said. 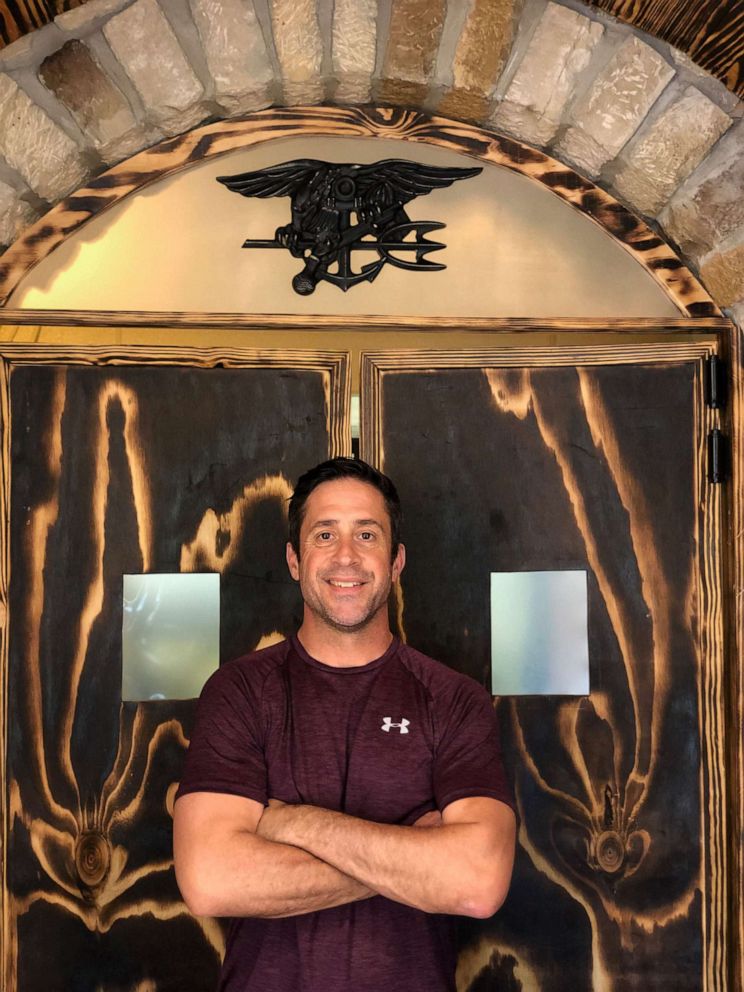 Fernandez had been looking forward to reopening ever since. On April 30, Texas began the slow process of reopening establishments with rules like only serving 25% max capacity and implementing strict seating arrangements to maintain safety, said Fernandez.

MORE: Prospect of reopening amid COVID-19 crisis has some restaurateurs balking

When, recently, a customer of his left a hefty tip, Fernandez was shocked by the man's generosity. "I said to him, 'Are you sure? You don't have to do this.' He said, 'No, double charge everything,' and I knew he wouldn't take no for an answer," he recalled. "I was really appreciative and thanked him."

The restaurant owner would not disclose the patron's name, citing privacy. 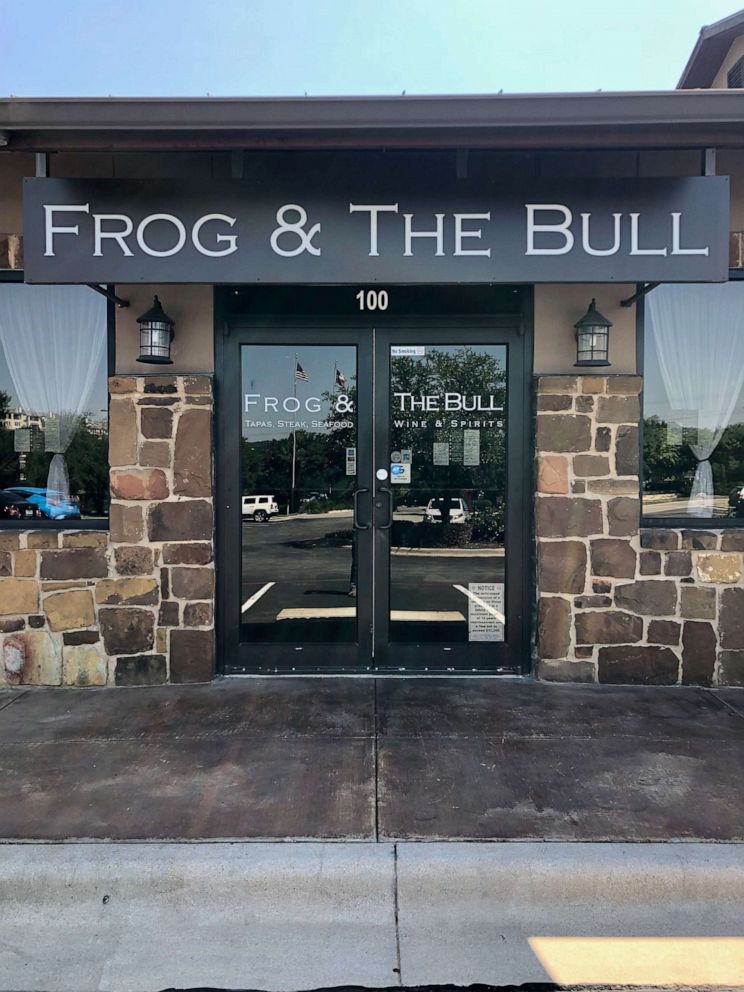 After the anonymous customer left the restaurant, Pikoff said he noticed something else on the tab. The same customer had left a $300 tip for Pikoff and $1,000 more "for the house."

"I had never seen [a tip like] that on my tabs before... I had to take it to David and a few other employees around the restaurant just to be like, 'Am I reading this right?' We were all shocked," said Pikoff.

Now, Pikoff plans to use the money to pay his tuition at Colorado State University, which he plans to attend this fall. 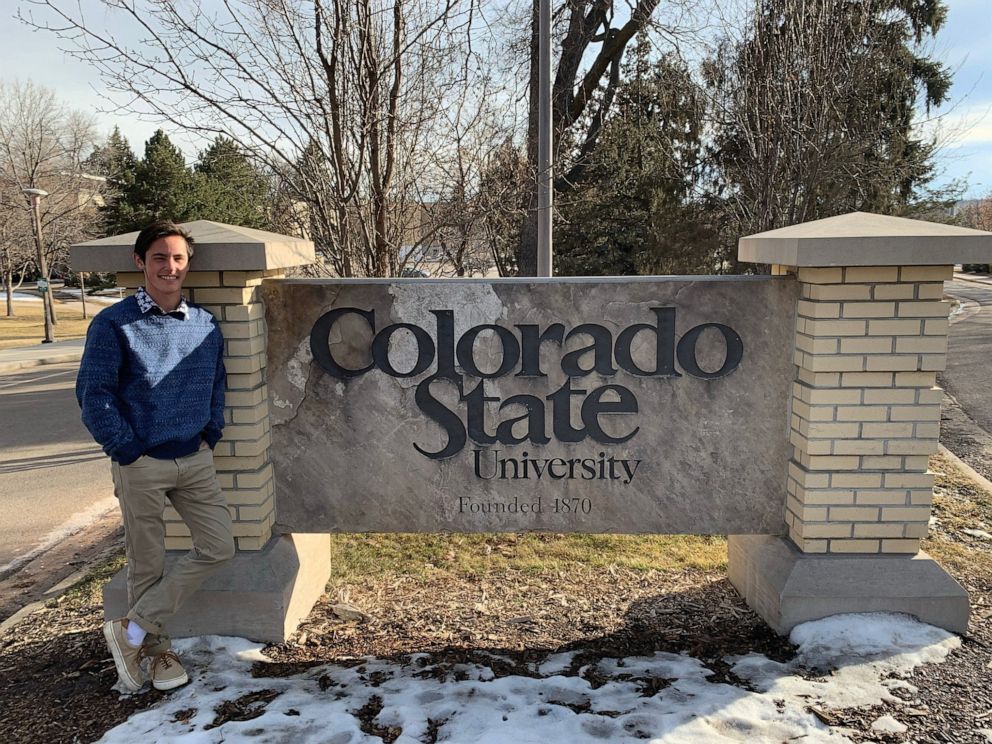 Courtesy Josh Pikoff
Josh Pikoff, 18, a server at Frog & The Bull, was given a $300 tip, April 30, 2020.
MORE: Amid <a href="https://abcnews.go.com/alerts/coronavirus" id="_ap_link_coronavirus_Coronavirus_" target="_blank">coronavirus</a>, good news is happening

Fernandez, a former Marine, has experience staying afloat during hard times, and is proud that his restaurant team is still working hard despite the difficult circumstances.

"[The tip] was good for me, but it was also good for the troops because they can see the benefits [of hard work] and staying in it," Fernandez said.