President Joe Biden and Justice Stephen Breyer appeared together Thursday at the White House to announce Breyer's retirement from the Supreme Court, clearing the way for Biden to follow through on his campaign promise to nominate the first Black woman to the high court as his historic first pick.

"I'm here today to express the nation's gratitude to Justice Stephen Breyer for his remarkable career of public service, and his clear-eyed commitment to making our country's laws work for its people," Biden said.

Biden praised Breyer's career in public service, beginning in the United States Army as a teenager before going on to serve in all three branches of government before he turned 40. Multiple times, Biden noted his personal connection to Breyer, as the only president to have presided over a justice's confirmation -- when he was chairman of the Senate Judiciary Committee and Breyer was nominated to the Supreme Court in 1994 by President Bill Clinton. 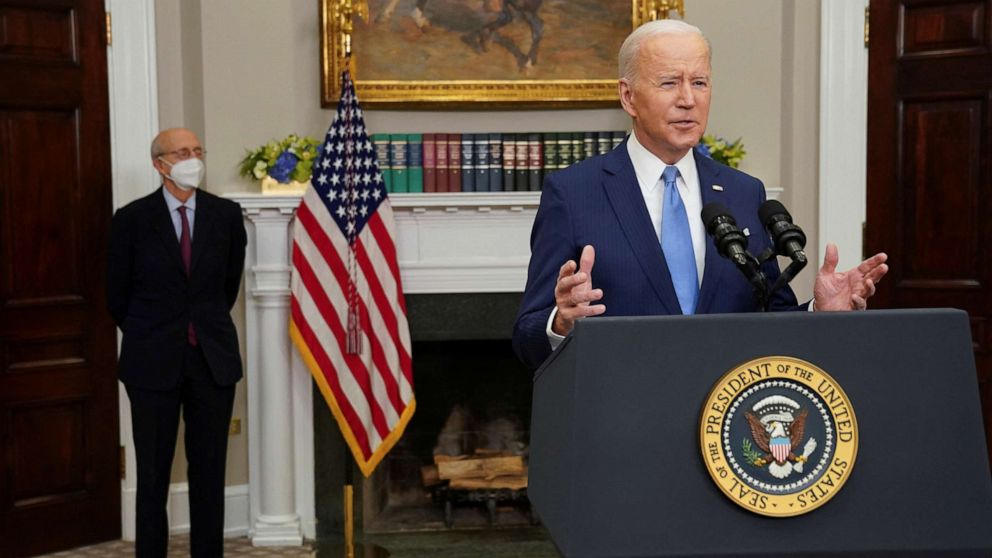 Kevin Lamarque/Reuters
President Joe Biden delivers remarks with Supreme Court Justice Stephen Breyer as they announce Breyer will retire at the end of the court's current term, at the White House in Washington, D.C., Jan. 26, 2022.

"He has patiently sought common ground and built consensus, seeking to bring the court together. I think he's a model public servant in a time of great division in this country," Biden said, hailing Breyer for being a justice who could bridge divides on the bench.

Turning to the vacancy he will leave, Biden also reaffirmed his commitment to nominate the first Black woman to the Supreme Court, which he said was "long overdue."

BREAKING: "I've made no decision except one: The person I will nominate will be someone with extraordinary qualifications...That person will be the first Black woman ever nominated to the United States Supreme Court," Pres. Biden announces. https://t.co/hQKNJg7Lhr pic.twitter.com/yDjebjLOVu

"While I've been studying candidates' backgrounds and writings, I've made no decision except one: the person I will nominate will be someone with extraordinary qualifications, character, experience and integrity. And that person will be the first Black woman ever nominated to the United States Supreme Court. It's long overdue in my opinion, I made that commitment during the campaign for president, and I will keep that commitment," he said.

Biden said he's made "no choice at this point" but it's his intention to announce his nominee "before the end of February" after consulting with both Democratic and Republican senators. He also noted Vice President Kamala Harris will play a key consulting role in the process. 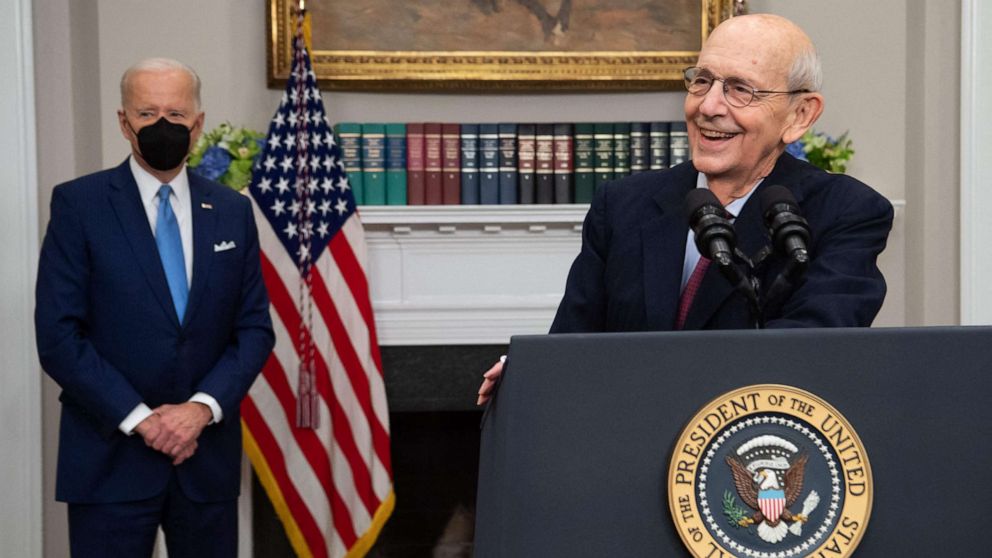 Saul Loeb/AFP via Getty Images
Supreme Court Justice Stephen Breyer announces his retirement alongside President Joe Biden during an event in the Roosevelt Room of the White House, in Washington, D.C., on Jan. 27, 2022.

"I will fully do what I'd said I'd do. I will fulfill my duty to select a justice, not only with the Senate's consent, but with its advice," Biden said. "I'm going to invite senators from both parties to offer their ideas and points of view."

Biden said he will keep in mind Breyer's spirit when he makes his decision on filling the seat.

"In the end, I will nominate a historic candidate, someone who's worthy of Justice Breyer's legacy, and someone who like Justice Breyer, provide incredible service on the United States Supreme Court," Biden said. 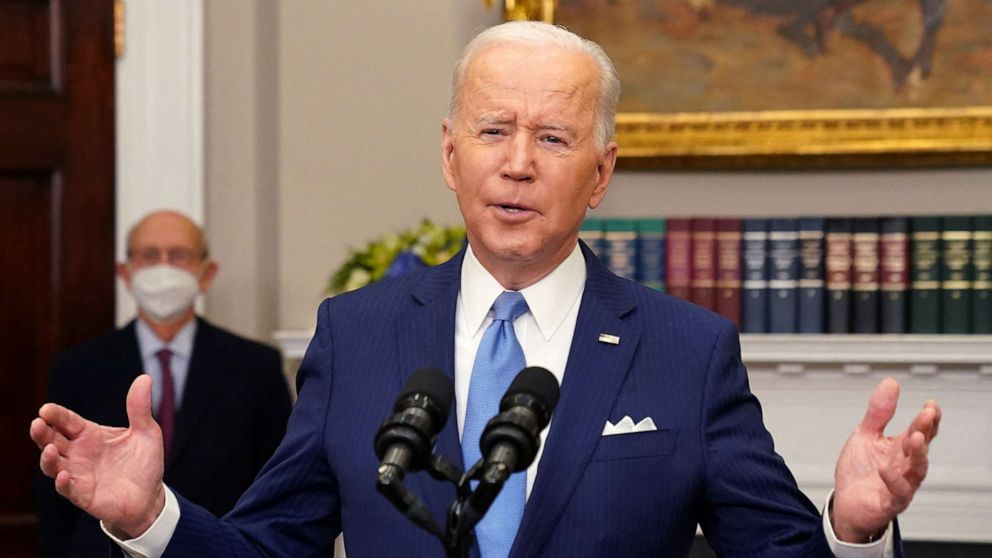 Kevin Lamarque/Reuters
President Joe Biden delivers remarks with Supreme Court Justice Stephen Breyer as they announce Breyer will retire at the end of the court's current term, at the White House in Washington, D.C., Jan. 27, 2022.

"'We are now engaged in a great Civil War to determine whether that nation or any nation so conceived and so dedicated can long endure,'" he said, citing Lincoln's famous words, saying they are still relevant today.

Supreme Court Justice Stephen Breyer reflects on his career: "It's a kind of a miracle, when you sit there and see...people that are so different in what they think, and yet they've decided to help solve their major differences under law." https://t.co/JhNQIRZvbD pic.twitter.com/OZFj5gW6ry

Recalling conversations with his students, Breyer said it's now up to the next generation will "determine whether the experiment still works."

"It's an experiment that's still going on. And I'll tell you something, you know who will see whether that experiment works? It's you, my friend. It's you, Mr. high school student," Breyer said. "I am an optimist, and I'm pretty sure it will." 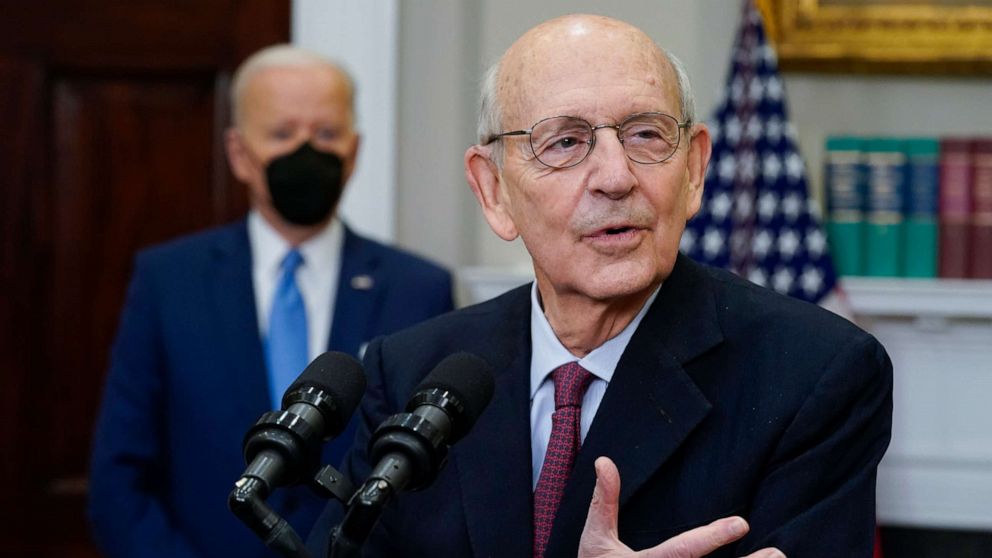 Earlier Thursday, in a letter to the president Thursday, Breyer formally notified Biden of his retirement and wrote he intends to complete term and remain until a successor is confirmed, holding his seat in several blockbuster decisions that will close the term in late June.

Breyer called the job a privilege and great honor, saying "I have found the work challenging and meaningful. My relations with each of my colleagues have been warm and friendly."

The move clears the way for Pres. Biden to follow through on his campaign promise to nominate the first Black woman to the high court for his historic first pick. https://t.co/Szf1sdE8A9 pic.twitter.com/wq6rKFjrRy

In finishing out the term -- but stepping down ahead of the midterm elections -- Breyer, 83, the most senior member of the Supreme Court's liberal wing who served on the bench for 27 years, fulfills the wish of Democrats who lobbied to ensure Biden could name a successor while Democrats controlled the Senate. 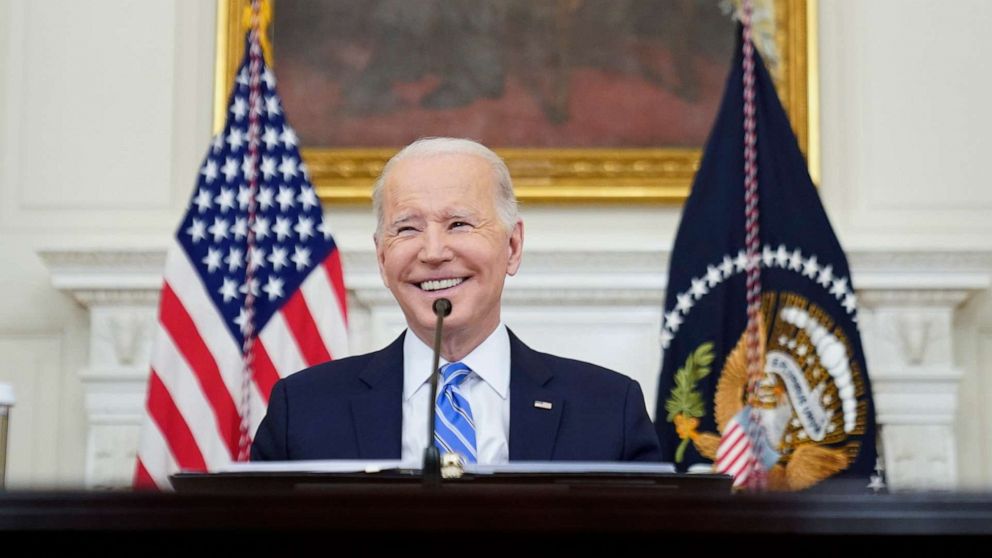 Andrew Harnik/AP
President Joe Biden speaks during a meeting with private sector CEOs about the economy in the State Dining Room of the White House, Jan. 26, 2022.

With the slimmest of margins, Democrats can now pass Biden's nominee without a single Republican vote due to a 2017 rule change under then-Senate Majority Leader Mitch McConnell, which lowered the threshold to break the filibuster from 60 votes to 51 votes for Supreme Court nominees. McConnell said last year that the GOP may try to block a Democratic nominee to the court if Republicans won control of the Senate in November and a vacancy occurred in 2023 or 2024.

Following Biden and Breyer's joint announcement, McConnell called on Biden to select a nominee to fill Breyer’s vacancy who has "demonstrated reverence for the written text of our laws and constitution" and urged him "not to outsource this important decision to the radical left."

Senate Majority Leader Chuck Schumer said Wednesday the chamber is prepared to move to confirm Biden's nominee with "all deliberate speed." Judge Ketanji Brown Jackson, who once served as a clerk to Breyer and was confirmed to the D.C. Circuit Court of Appeals last year with bipartisan support, is considered a top contender.

Erin Schaff/POOL/AFP via Getty Images, FILE
Associate Justice Stephen Breyer sits during a group photo of the Justices at the Supreme Court in Washington on April 23, 2021.

Once Biden nominates a replacement, Senate Democrats plan to not only hold a confirmation hearing swiftly -- similar to Justice Amy Coney Barrett, who had her first hearing within 13 days of her nomination -- but also to hold those proceedings while Breyer is still sitting on the bench, according to two Democratic aides familiar with the matter.

While the transition presents an exciting opportunity for Biden and his supporters, replacing Breyer will not change the court's 6-3 conservative majority.