President Joe Biden marked a major victory Thursday, signing the American Rescue Plan into law -- the first legislative win of his presidency seven weeks after taking office and on the one-year anniversary of COVID-19 being declared a pandemic by the World Health Organization.

The nearly $2 trillion COVID stimulus legislation has been the administration's highest priority in the beginning days of Biden’s presidency, seeking to “go big” to get the virus under control and get relief directly into the hands of most Americans in the form of $1400 checks.

Despite the weight of the moment, the Oval Office signing was without much fanfare, with Biden giving brief remarks as Vice President Kamala Harris looked on from his side. 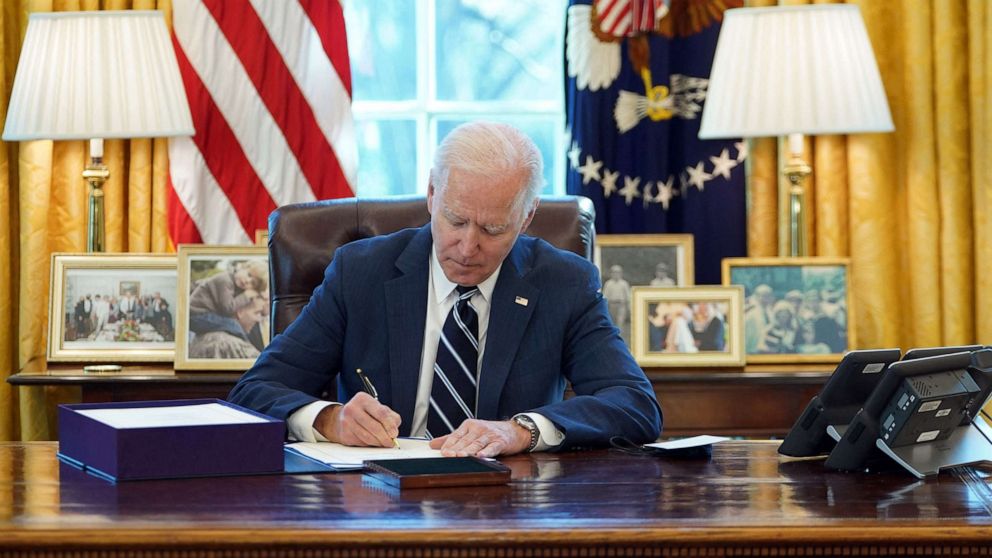 Mandel Ngan/AFP via Getty Images
President Joe Biden signs the American Rescue Plan on March 11, 2021, in the Oval Office of the White House in Washington, D.C.

"[T]his historic legislation is about rebuilding the backbone of this country, and giving people of this nation, working people, middle class folks, people who built the country a fighting chance," Biden said before singing the bill.

While Biden had long hoped to pass the bill with bipartisan support, not a single Republican in the House or the Senate voted in favor of the legislation.

Despite the party-line vote, the rescue plan has wide support with the American people. A Pew Research poll found that 70% of Americans say they favor the legislation, with 41% of Republicans also saying they support the package.

"It's clear that an overwhelming percentage of the American people, Democrats, independents, our Republican friends, have made it clear, the people out there made it clear they strongly support the American rescue plan. Yesterday with the final passage of the plan in the House of Representatives, their voices were heard," Biden said Thursday.

While the signing was initially slated for Friday, the White House announced the bill would be signed into law Thursday afternoon after the House was able to deliver it for Biden’s signature more quickly than anticipated.

White House press secretary Jen Psaki previewed there would be an additional signing event at the White House Friday that would include House and Senate Democrats.

The bill allocates $130 billion to reopen schools and provide $160 billion for vaccinations and testing, along with billions in aid for small businesses, food and housing, along with the $1,400 direct payments. 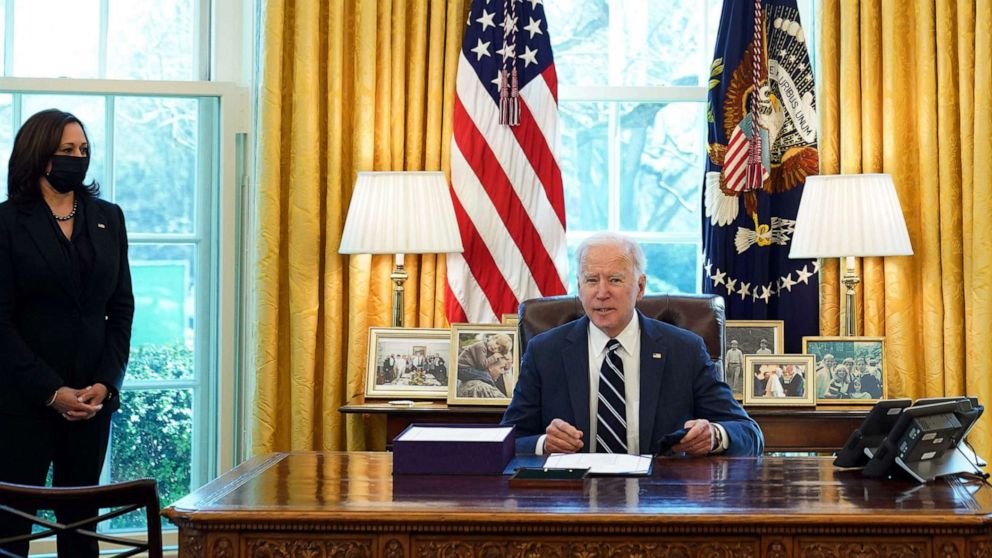 Mandel Ngan/AFP via Getty Images
President Joe Biden signs the American Rescue Plan on March 11, 2021, in the Oval Office of the White House in Washington, D.C.

It would also help to lower the cost of health care plans purchased on federal marketplaces for middle-class and low-income Americans by increasing subsidies, and extend additional unemployment benefits for Americans, set to expire on March 14, without interruption.

With the American Rescue Plan now law, the United States has officially allocated over $5 trillion in funding for COVID relief -- a massive sum that outpaces what the United States spent during World War II when adjusted for inflation.

MORE: Lower Obamacare premiums and other things you may have missed in the COVID-19 relief bill

Biden proposed the bill even before taking office, laying out the massive spending measure on Jan. 14 in an evening address to the nation, making his case for the $1.9 trillion price tag.

"We not only have an economic imperative to act now. I believe we have a moral obligation. In this pandemic, in America, we cannot let people go hungry. We cannot let people get evicted. We cannot watch nurses, educators, and others lose their jobs. We so badly need them. We must act now and act decisively," Biden said in the January remarks.

He will also address the pandemic in his first prime-time address Thursday night, taking stock of the year since the pandemic declaration, and what’s next for the country in the continued effort to get the coronavirus under control.