Juneteenth: Together We Triumph
A celebration in observance of Juneteenth, including an interview with former President Obama who talks about race, resilience and healing the racial divide.

It's a day African Americans have celebrated yearly since the Civil War-era and the culmination of a decades-long effort by advocates to get national recognition for the momentous development in American history.

MORE: Haven't heard of Juneteenth? Here's what you need to know

A jubilant Vice President Kamala Harris, the nation's first Black vice president, who co-sponsored the legislation when she served in the Senate, spoke about the significance of the occasion, noting slaves helped build the White House. 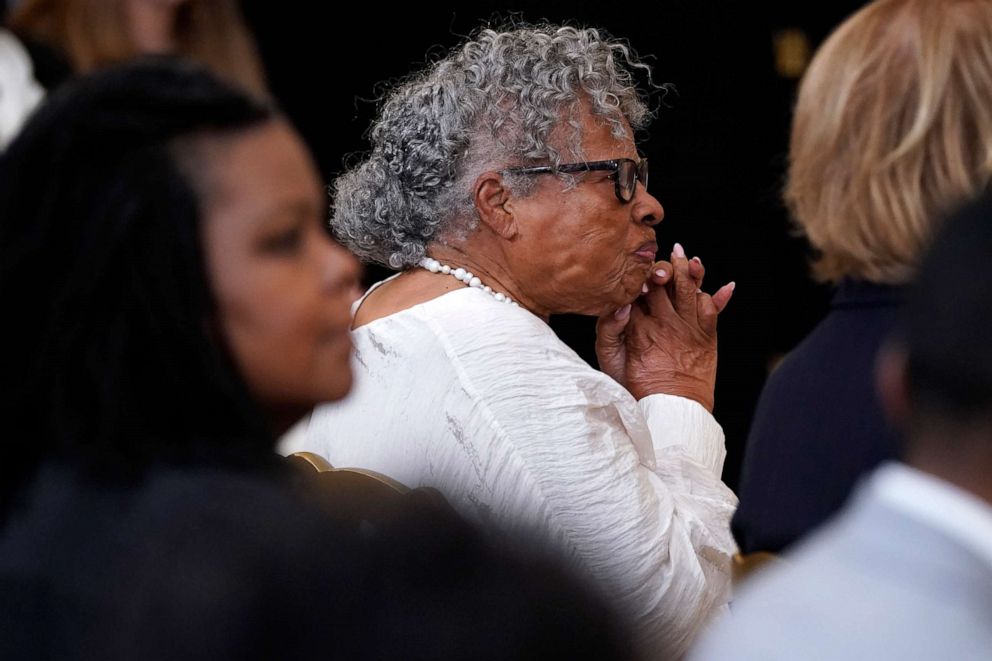 Evan Vucci/AP
Opal Lee is recognized during an event to mark the passage of the Juneteenth National Independence Day Act, in the East Room of the White House, June 17, 2021.

“Throughout history, Juneteenth has been known by many names: Jubilee Day. Freedom Day. Liberation Day. Emancipation Day. And today, a national holiday,” Harris said, to cheers and applause in a White House East Room filled with about 80 lawmakers and other guests.

“And looking out across this room, I see the advocates, the activists, the leaders, who have been calling for this day for so long, including the one and only Ms. Opal Lee,” she said, before Biden left the stage and walked over to the 94-year-old he later called the "grandmother of the movement."

In 2016, at 89-years old, Lee walked from her home in Fort Worth, Texas, to the nation's capital in an effort to get Juneteenth named a national holiday. Also in the audience was musical icon Usher, who has advocated for the holiday. 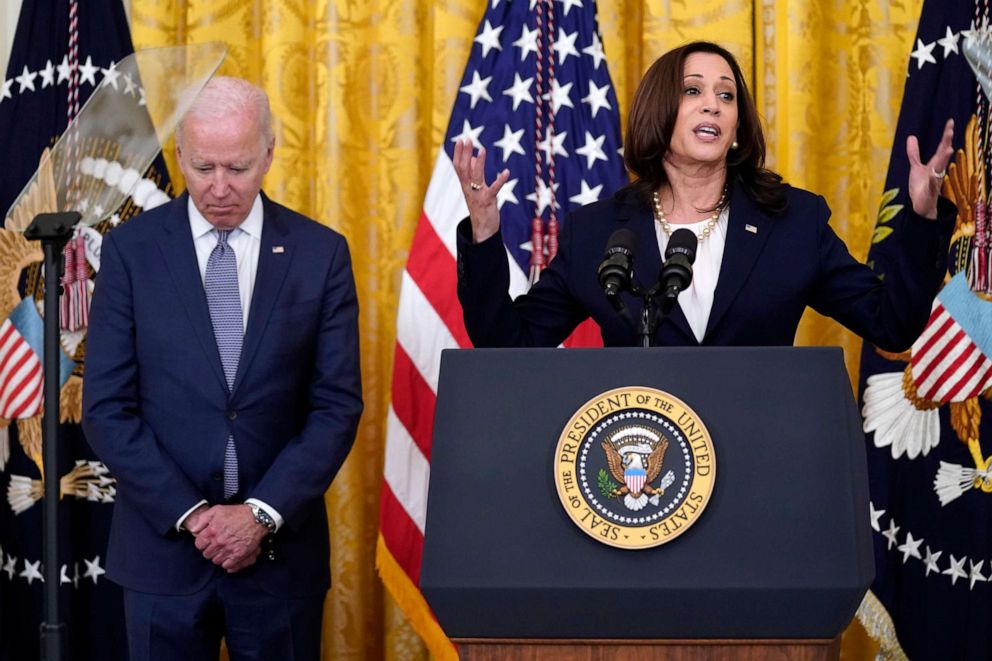 Evan Vucci/AP
President Joe Biden listens as Vice President Kamala Harris speaks during an event to mark the passage of the Juneteenth National Independence Day Act, in the East Room of the White House, June 17, 2021.

"These are days when we, as a nation, have decided to stop and take stock, and often to acknowledge our history," she said. "So as we commemorate the history of Juneteenth, as we did just weeks ago with the Tulsa Race Massacre, we must learn from our history. And we must teach our children our history." 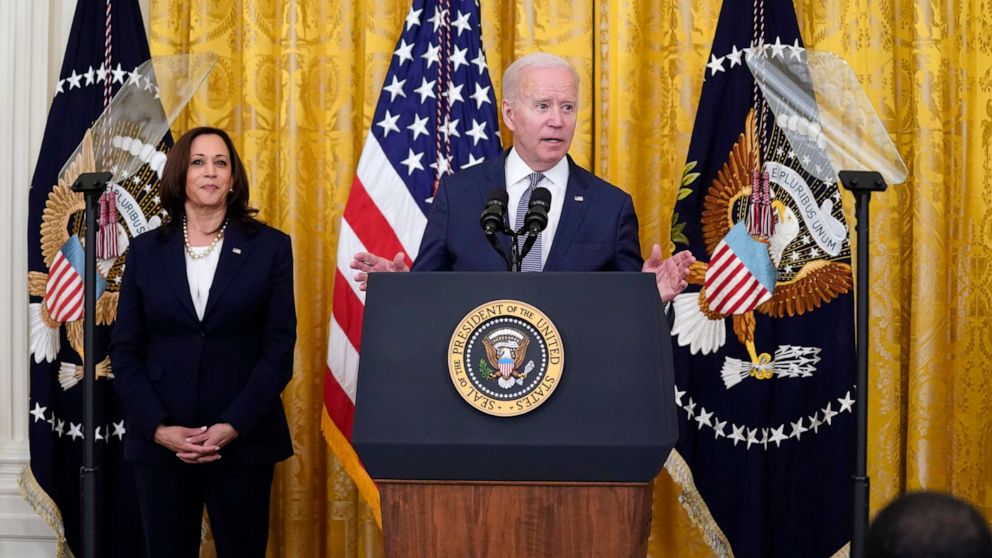 Evan Vucci/AP
President Joe Biden speaks during an event to mark the passage of the Juneteenth National Independence Day Act, in the East Room of the White House, June 17, 2021.

Biden then spoke, calling Juneteenth a day of "profound weight and profound power."

"A day in which we remember the moral stain that the terrible toll that slavery took on the country and continues to take, what I have long called America's original sin," he said.

"Great nations don't ignore their most painful moments...they embrace them," Pres. Biden says as Juneteenth is made a holiday.

"Great nations don't walk away. We come to terms with the mistakes we've made. And remembering those moments, we begin to heal" https://t.co/9kpu90QEQ1 pic.twitter.com/f7uiFhCcGk

"By making Juneteenth a federal holiday, all Americans can feel the power of this day and learn from our history and celebrate progress and grapple with the distance we’ve come but the distance we have to travel," Biden continued.

The president then turned political, raising what he called the "assault" on voting rights.

"You see this assault from restrictive laws, threats of intimidation, voter purges and more," Biden said. "We can't rest until the promise of equality is fulfilled for everyone in every corner of this nation. That to me is the meaning of Juneteenth." 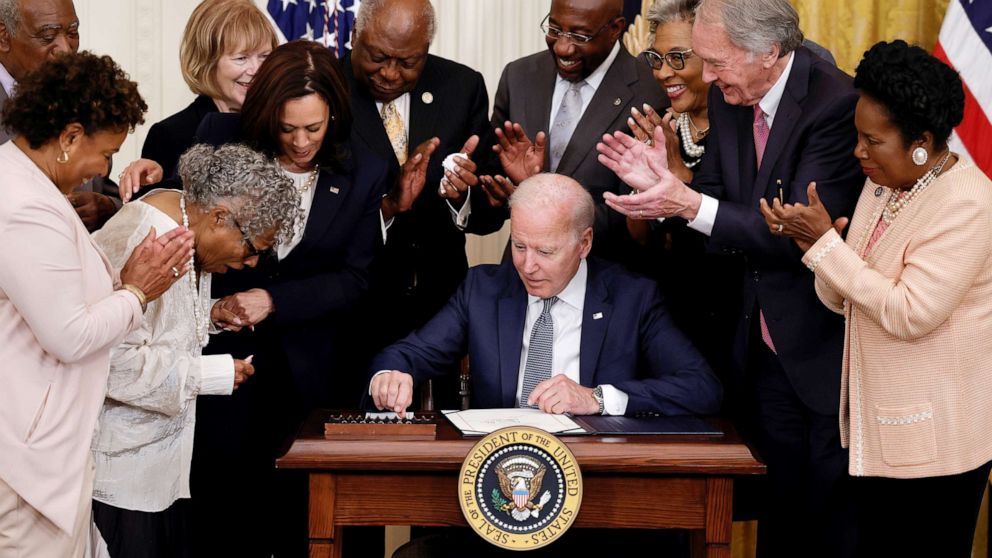 Carlos Barria/Reuters
President Joe Biden is applauded as he reaches for a pen to sign the Juneteenth National Independence Day Act into law as Vice President Kamala Harris stands by in the East Room of the White House June 17, 2021.

Ultimately, he said Juneteenth "doesn't just celebrate the past -- it calls for action today."

The federal government said most employees will be off this Friday to mark the occasion, around which celebrations have become more mainstream in recent years, taking on added significance in 2020 when the country went through a racial reckoning after the killing of George Floyd. 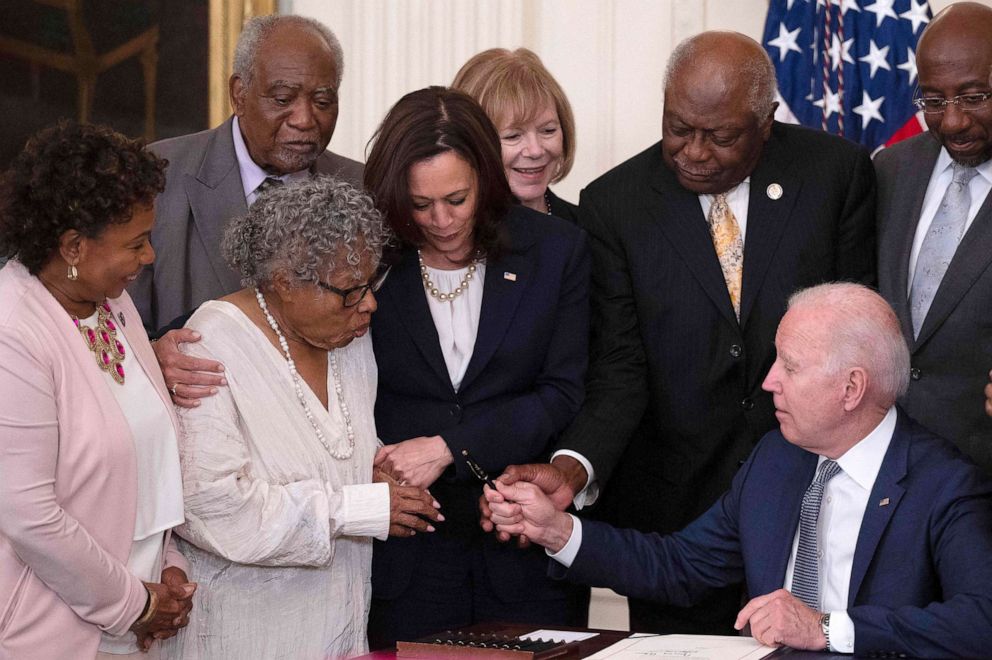 Jim Watson/AFP via Getty Images
Vice President Kamala Harris watches as Opal Lee (2nd L), the activist known as the grandmother of Juneteenth, is given a pen after President Joe Biden signs the Juneteenth National Independence Day Act, in the East Room of the White House, June 17, 2021.

"This is an important step for America," she said.

Majority Whip Rep. Jim Clyburn, D-S.C., the highest-ranking Black lawmaker, thanked colleagues for their "tremendous effort on behalf of an issue that has taken more than a century and a half."

The group then sang the hymn "Lift Every Voice and Sing," what's called the Black National Anthem, to close the ceremony. 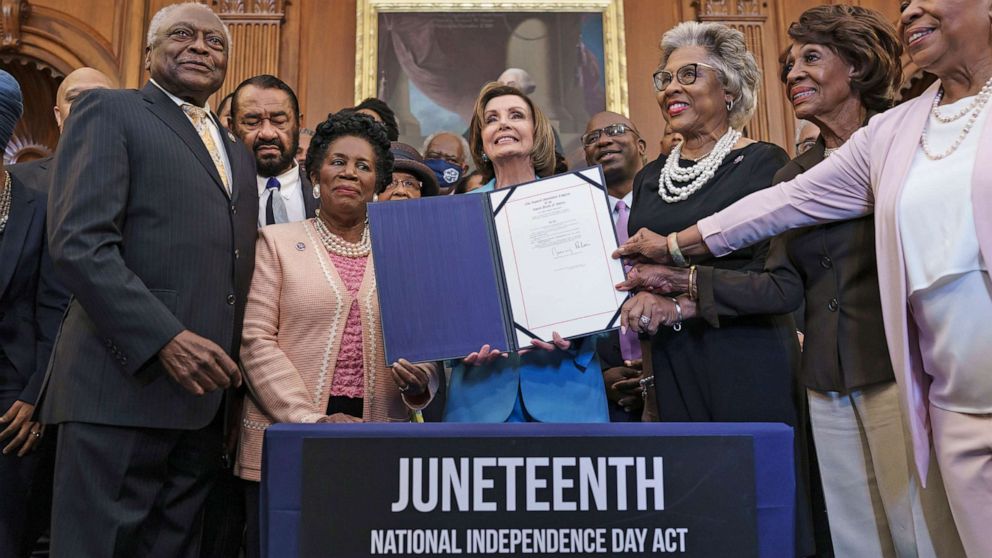 Advocates say Juneteenth -- also known as Freedom Day, Liberation Day and Emancipation Day -- offers a day to reflect on slavery's terrible stain on American history and for celebrations that look similar to those on the Fourth of July.

It's celebrated on June 19 to mark the day in 1865 when African American slaves in Galveston, Texas, were among the last to be told they had been freed -- a full two-and-a-half years after the Emancipation Proclamation outlawed slavery in the Confederacy and two months after the Civil War officially ended.

Deborah Evans, secretary and director of communications with the National Juneteenth Observance Foundation, praised the bill becoming law to ABC News on Thursday.

"Finally!" she said. "We are no longer the orphan event." 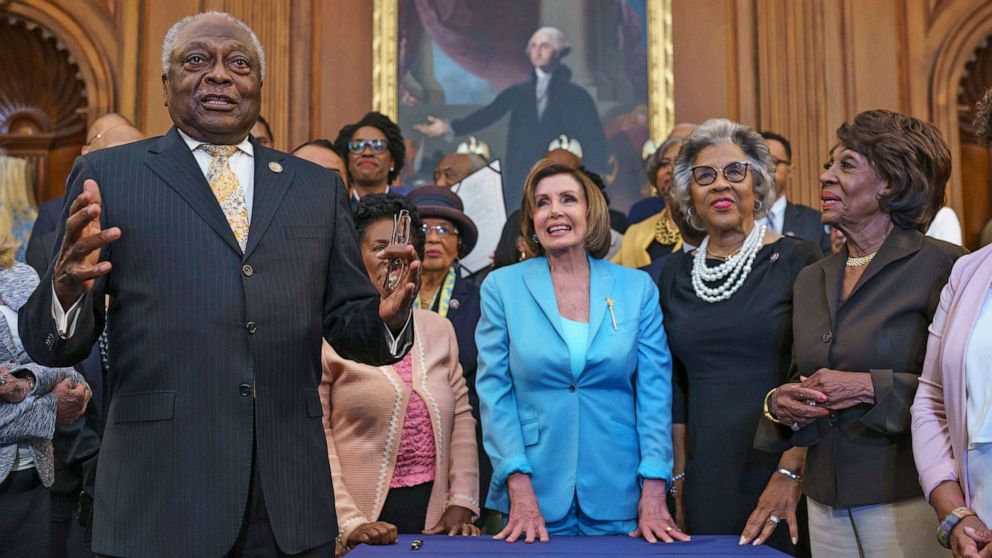 Echoing Democratic lawmakers, she said it paves the way for other routes to help heal the wounds of slavery.

“Now that we've gotten the recognition, we can build off that momentum for reparations," she said. She also highlighted the importance of teaching the history of the holiday "to train not only the children, but we've got to go back and train the children's first teachers, their parents, because many do not know about Juneteenth."

Though advocates have long worked to make Juneteenth a national holiday, even succeeding at the state level everywhere but South Dakota, it took Congress just two days to pass the legislation once one Republican senator, Sen. Ron Johnson, who blocked the move last year, dropped his opposition.

The bill then passed the Senate by unanimous consent on Wednesday before passing the House Thursday night in a 415-14 vote, with all opposition coming from GOP members.

"The bill is passed."

Juneteenth is the first new holiday created by Congress in nearly 40 years, when lawmakers in 1983 designated Martin Luther King Jr. Day as the third Monday in January to memorialize the assassinated civil rights leader.

Ahead of Biden's signing, the U.S. Office of Personnel Management said on Twitter that "most federal employees will observe the holiday tomorrow, June 18th" since it falls on a weekend. 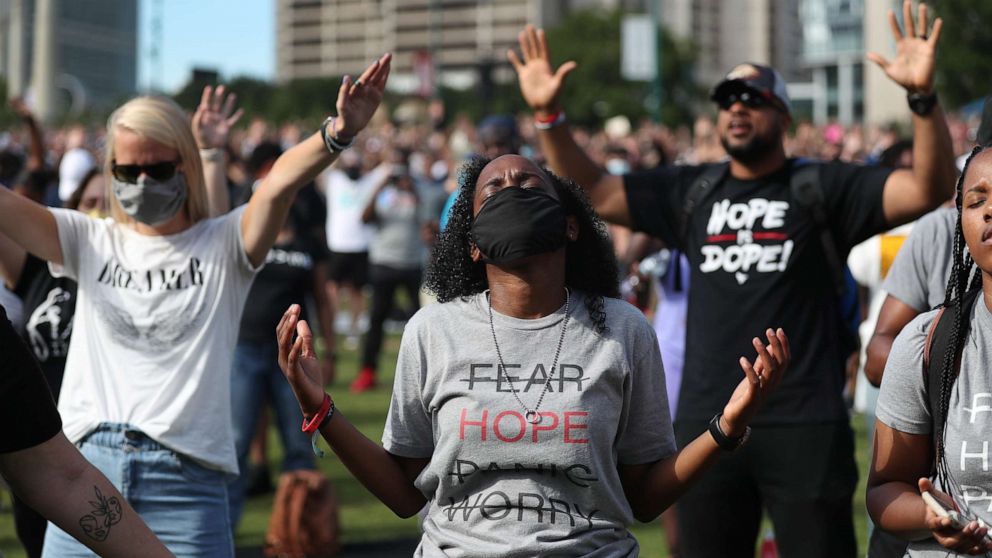 Joe Raedle/Getty Images, FILE
People pray together during a Juneteenth event at Centennial Olympic Park on June 19, 2020, in Atlanta.

Under political pressure, former President Donald Trump rescheduled a campaign rally in Tulsa, Oklahoma, on June 19, 2020, after he was criticized as culturally insensitive for scheduling the rally on the holiday and near the site of the 1921 Tulsa Race Massacre. Trump said he moved the rally, "out of respect" for the occasion.

MORE: After racially divisive tweets, Trump is quiet on Juneteenth holiday he claims he made 'famous'

Anthony Brown, a social studies professor who teaches on race matters at the University of Texas, told ABC News he hopes Juneteenth being recognized as a national holiday will provide a platform for teachers and community educators to have a space to discuss the history, as well give the opportunity to unify groups at a neighbor-to-neighbor level.

"If you took a picture of what kinds of things we do as Americans during the Fourth of July, you'll see the same kinds of activities at a Juneteenth celebration," he said. "I do hope with Juneteenth there's also going to be a significant amount of historical context and remembering of the expression of freedom that took in place in Galveston, Texas, in 1865.” 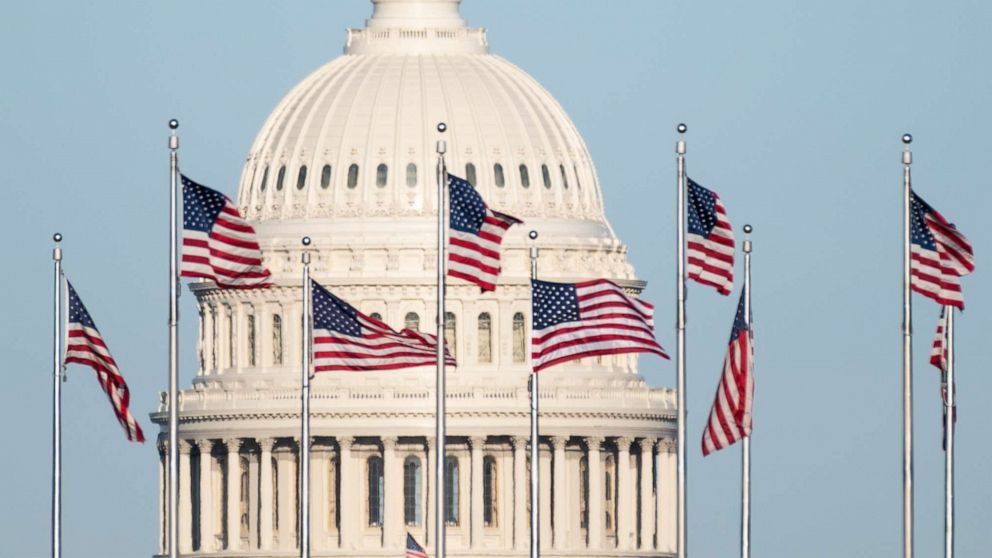 Bill Clark/CQ-Roll Call via Getty Images, FILE
The U.S. Capitol dome is seen behind the American flags at the base of the Washington Monument in Washington, March 29, 2021.