By Stephanie Wash, Daisha Riley, Catherine Thorbecke
Share —
Sign up for our newsletters to get GMA delivered to your inbox every morning!

As school shootings continue to plague communities across the U.S., some districts are going beyond traditional active shooter drills in an effort to ensure students are safe if the worst were to happen.

In Charleston County, South Carolina, three armored, bulletproof doors have been installed across three schools as part of a free year-long pilot program that was green-lighted by the local school district.

The doors were installed by R2P Innovations, a company owned by Tony Deering. For more than a decade, Deering’s primary company Pegasus Steel has manufactured thousands of tons of components that have gone into vehicles to protect the U.S. military and allied forces overseas from mines and IEDs. His latest venture, however, focuses on protecting children in schools. 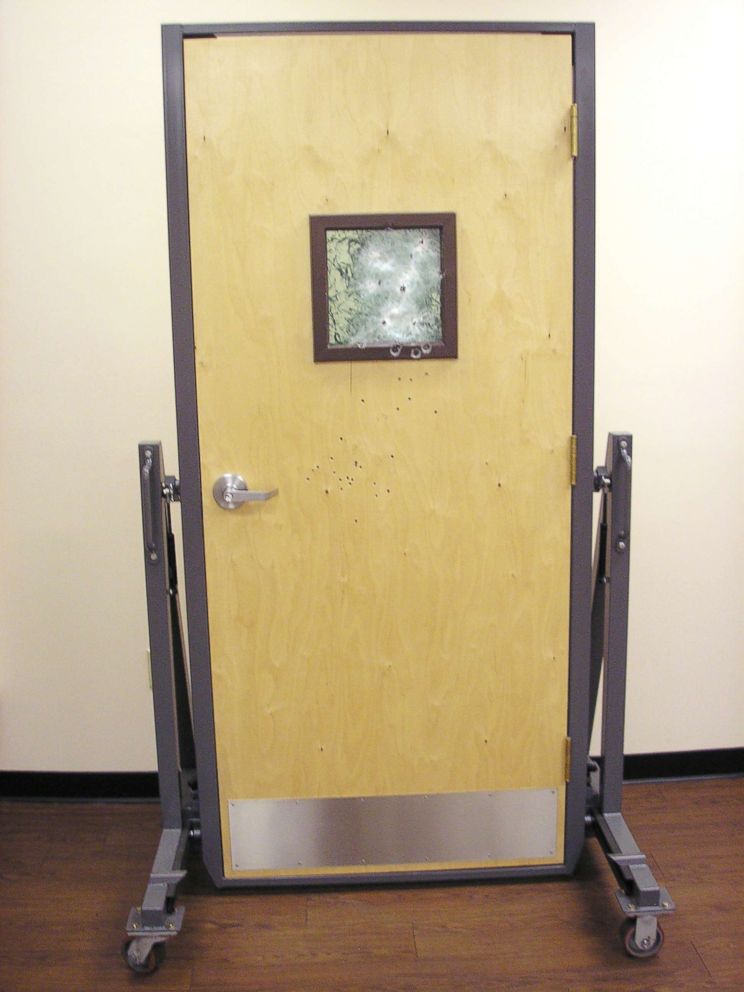 2P Innovations
A bulletproof door is pictured in this undated photo.

"The mission of R2P Innovations is to take the experience that we've gleaned over many years protecting men and women in uniform, and employ that in a way that we can protect the young folk in the case of active shooter events in schools," Deering told "Good Morning America."

The doors that R2P Innovations make may appear to be ordinary classroom doors, but are able to take on gunfire and absorb bullets -- even from a military-grade assault rifle. Each door is valued at roughly $4,000, according to Deering.

Rev. Dr. Eric L. Mack, the vice chair of the Charleston County School District Board, told "GMA" that in the future, he believes, "That there will be a great need to add these types of doors to every classroom to help protect our students."

“I would’ve never, never imagined some five, 10 years ago, 20 years ago that we would be to this point today, but this is where we are,” Mack added. “You always want to be ahead of the game and not behind.”

Deering says the doors rank a Level 8 on the Underwriters Laboratories (UL) 752 scale -- the standard unit for bullet-resistant items -- meaning that a four and a half inch square can take on five shots of M80 ammunition, one on each corner and one through the center -- with zero penetration. 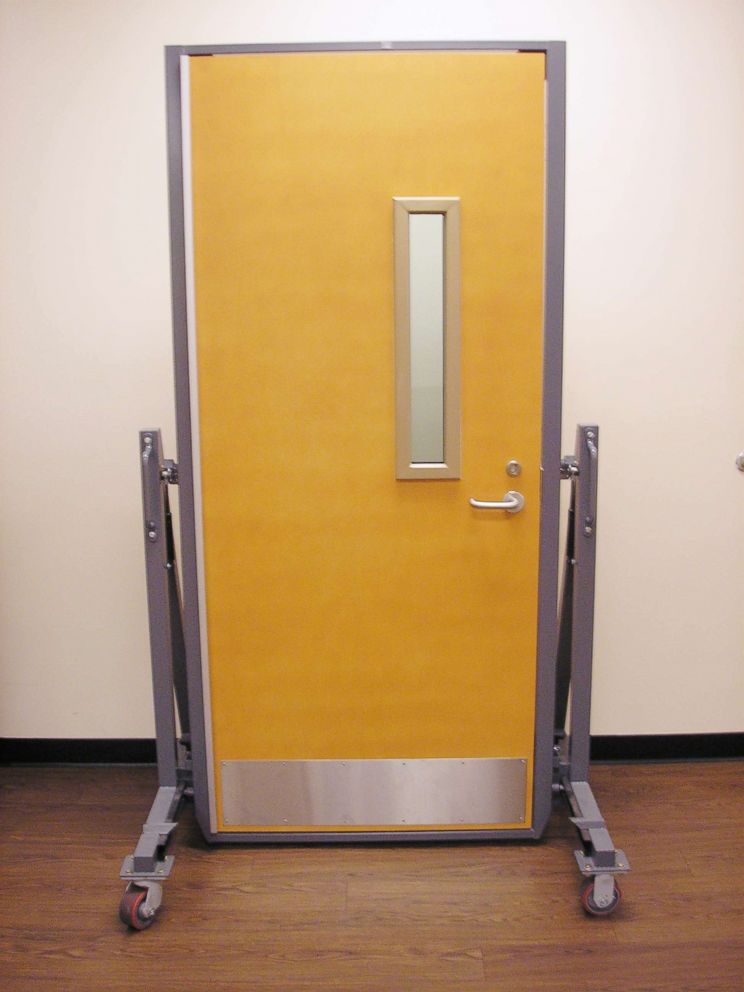 2P Innovations
A bulletproof door is pictured in this undated photo.

"Level seven is AR-15, which we've seen ... in Sandy Hook and Parkland," Deering said, adding that their doors are “a level eight door, which will stop a higher level of threat."

“Having conducted many assessments of schools, we would put our doors on classrooms and in common areas, be it a library, a cafeteria, an auditorium -- seek out safe havens adjacent to those common areas, so in God forbid an event of an active shooter, the folks that find themselves really caught out in the open could seek refuge and safe haven in one of those rooms,” Deering told ABC News. “What we're looking to do is buy the critical eight to 10 minutes of time that it would take for the police force, the emergency responders to get on to the scene and mitigate the threat,” Deering told ABC News.

In an exclusive demonstration for "GMA," the North Charleston SWAT Team fired bullet after bullet at the door, targeting the window while increasing the volumes of fire and caliber of weapons as they went on. The results left even members of the SWAT Team astounded.

Still, Deering notes the door cannot stop everything, including gunfire through a classroom wall.

"The door is not a catch-all solution," Deering said. "It truly is the last line of defense.” 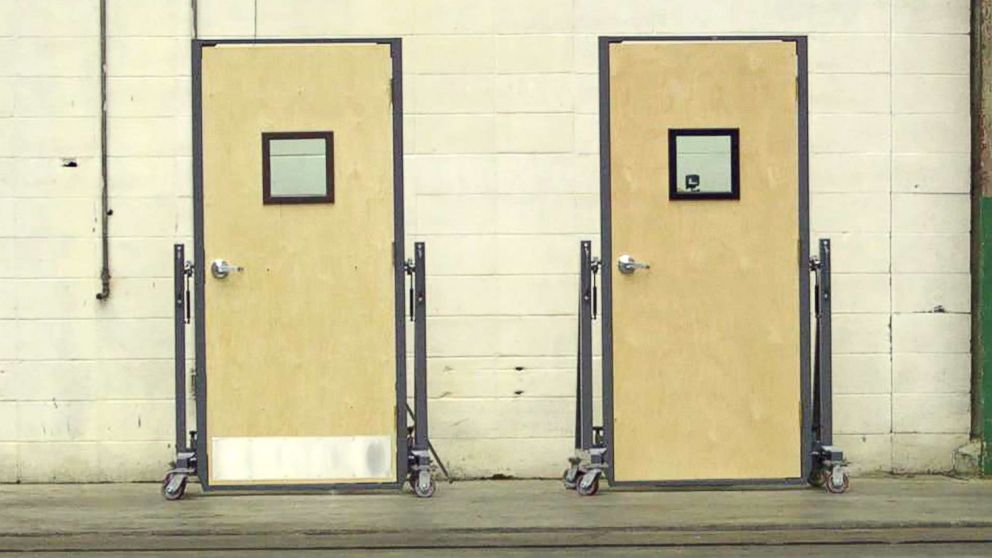 2P Innovations
Bulletproof doors are pictured in this undated photo.

Portable panic buttons and bulletproof products on the market

These doors are just one of the increasing number of items now on the market to help prevent tragedies at schools.

At this year's annual National School Safety Conference, more than 900 school administrators and law enforcement reps convened to get the first look at more than 100 of the latest inventions, gadgets, and technology in school safety and security.

"They come to conferences like this to hopefully find what has worked maybe best practices that are out there in the country," Curt Lavarello, the executive director of the School Safety Advocacy Council, told "GMA."

One item on display was a projectile launcher that is advertised as a non-lethal handheld classroom defense shooter, dubbed "LifeLite" and sold by the company Pepperball. The launcher is designed to hurt, disable and stop a school shooter from up to 150 feet away.

Pepperball calls it a happy medium between arming teachers and leaving them defenseless during an active shooting incident on campus.

"It affects the lungs and [the] respiratory system it doesn’t allow the person to breathe so it takes the fight out of the threat," Kyle Tengwall, a spokesperson for Pepperball, told "GMA."

Other devices, such as Lobbyguard and Ident-A-Kid scan visitors' faces, claiming they run instant background checks before letting people on school grounds.

Also available is a portable panic button for teachers, marketed by SecureTech, claims to notify nearby police officers of a threat instantly.

The convention also featured bulletproof vests for school security guards, as well as backpacks that were advertised as being bulletproof.

Despite these advancements, some experts say making strides when it comes to school safety will take much more than technology. Tom Gentzel, the Executive Director and CEO of the National School Boards Association told ABC News he believes a lot has already been done by school officials to improve the security of school buildings, but some products can be helpful if school officials enlist the services of security experts to help vet them.

“But really we should be focusing on preventing violence before it even happens,” Gentzel said. “And in that sense we need to be looking at meeting the needs of students, particularly those that have mental health issues. We need to do a much better job and we need help from the federal government to make sure that we can we share information between and among agencies about students who are troubled so that we can deal with those issues before they actually show up at the school and pose a threat.”