A couple in California is suing a fertility center in Los Angeles after they say they were forced to go to court to get custody of their baby from a woman across the country who had given birth to him unwittingly as a result of the facility's error.

Anni and Ashot Manukyan of Glendale claim that they were one of three couples to have their embryos allegedly swapped at CHA Fertility Center, according to their lawyer Adam Wolf.

"Due to the extreme misconduct of CHA Fertility Center, the number of things that went wrong here is just plain staggering," Wolf said on Wednesday announcing the lawsuit. "This case is one of the most egregious I have ever seen. It is clearly one of the worst fertility-center tragedies in U.S. history."

(MORE: Baby born from womb of dead donor for 1st time in US history: Hospital)

A couple in New York recently filed a federal lawsuit against CHA, claiming they'd given birth to twins that were not biologically theirs.

The couple said they spent more than $100,000 on treatment and other expenses at CHA Fertility Center, according to a lawsuit. 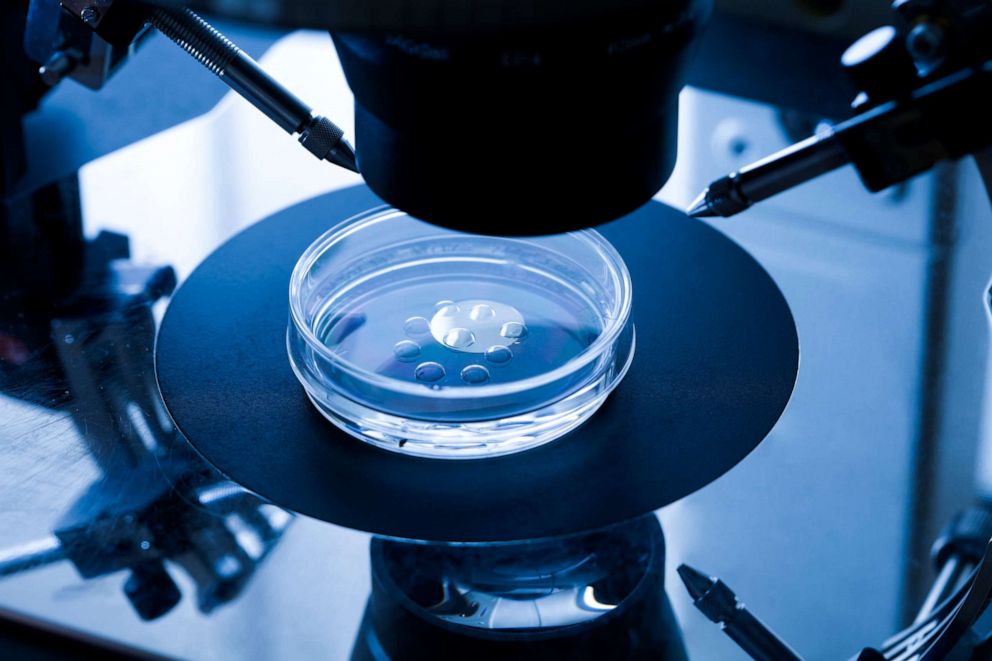 Identified in court papers only as Y.Z. and A.P., the couple said they were shocked in March 2019 when they gave birth and realized that the children weren’t of Asian descent, as they are. DNA testing eventually proved that the twins, both boys, weren’t related to them or each other, the lawsuit said. The twins actually belonged to two other couples who were also clients of the hospital.

Y.Z. and A.P., who married in 2012, said they were required to give up custody, “thus suffering the loss of two children,” according to the lawsuit.

On Wednesday, the Manukyans came forward with Wolf as the parents of one of the boys born to Y.Z. and A.P. in New York. In court papers, the Manukyans said they'd turned to CHA Fertility after researching and deciding to try in vitro fertilization to build their family.

The Manukyans, who were married in 2007, said that in March 2011, an embryo transfer had resulted in the birth of their daughter. In August 2018, the couple decided to try for another baby with three remaining embryos. They said two embryos were supposed to be used and the third was discarded.

We live with the uncertainty that another embryo of ours may be born to someone else.

However, according to their court filing, neither embryo was transferred to Anni Manukyan's uterus. The couple said that CHA allegedly implanted another couple's embryo in her womb. That transfer, however, did not result in a pregnancy, according to the couple's lawsuit.

The couple said they believe that in August 2018, however, at least one of Anni Manukyan's embryos was implanted in the New York woman, resulting in the birth of their son.

"We live with the uncertainty that another embryo of ours may be born to someone else," Anni Manukyan said.

According to the couple, in the spring of 2019, CHA reached out to them for a "supposedly routine cheek swab test."

"CHA wanted to obtain their DNA -- under false pretenses -- so that CHA could determine covertly whether a child, born on March 11, 2019 to a New York couple as one of two twins, might actually be Anni's and Ashot's child," said a news release posted to their lawyer's website. "Weeks later, Anni and Ashot learned that they had a son, but CHA refused to provide any further information regarding the identity of the New York couple or the whereabouts of their son. During those weeks of uncertainty, Anni and Ashot did not know if they would ever be able to meet their child."

The couple said the baby was almost 2 weeks old when they learned of him.

"CHA robbed me of my ability to carry my own child, my baby boy, to be with him in the first couple of, you know, moments of his life, to nurse him, to just do like skin-on-skin contact to just, you know, be a mom to him," Anni Manukyan said Wednesday.

The couple said they hired lawyers and flew to New York, where they say they learned that Y.Z. and A.P. wanted to keep both babies. According to the lawsuit, after an "expensive" legal battle that took more than a month, a judge granted them custody of the child and the Manukyans were able to return to California in May with their baby.

(MORE: How a breakthrough new fertility test is offering hope for families who have suffered miscarriages)

Anni Manukyan described meeting her child for the first time in the lobby of a hotel as "heartbreaking."

"It’s indescribable ya know. I mean. It’s so many emotions running through my head like happiness, sadness, that that was the first time. Who wants to meet their child in the lobby of a hotel? It was just -- it was heartbreaking, it was terrible," she said.

Wolf, the couple's lawyer, said the Manukyans were seeking emotional and punitive damages as well as court costs in their fight for their infant son in New York and payments made to CHA.

"I hope that no one ever has to suffer through what my family has been through and I hope that CHA sees this, understands what it did, stops lying and takes responsibility before even more families are hurt," Anni Manukynan said.

(MORE: Modern baby: How IVF has changed 'the world order')

"Plaintiffs' pain and fear has not abated with their reunion with their son. They cry every day. They continue to see mental-health professionals. They no longer trust anyone, and their guard is always up. Their ordeal has not ended; it is just beginning. This is something that they will live with for the rest of their lives," the lawsuit said.

The couple said Wednesday that their baby boy was thriving and bonding with the family but Ashot Manukyan said that his family had suffered mentally.

"CHA put my family through living hell. We were like zombies. We could not sleep, eat or focus. We were helpless. It was awful. This situation should never happen. ... The hurting needs to stop and responsibility must be taken," he said.