Michael O'Brien-Onyeka says the future is "a big worry for us."

O'Brien-Onyeka leads Conservation International's field division in Kenya, and he's concerned about the effects of COVID-19 on both residents and wildlife.

"You have people who have lost their livelihood and don't know when they will get out of that," he said, "[and] you have in some places massively reduced numbers of [conservation] enforcement because of COVID."

He describes his rangers, who -- despite fears of the virus -- continue to work dressed in masks and gloves to protect Kenya's National Parks.

Even so, O'Brien-Onyeka acknowledges that not everyone has these resources.

"Since COVID-19 restrictions went into effect around the world over the past two months, two disturbing trends have emerged," Conservation International officials said in a recent statement. "First, we have seen alarming increases in bushmeat and ivory poaching in Kenya and Cambodia. Although some of this stems from food needs in rural areas, it appears that the commercial trade of illegal wildlife products has also expanded."

The organization cites daily reports from its field offices around the world that point to a "surge in agricultural expansion and illegal mining" which has "accelerated tropical deforestation in Brazil, Colombia and Cambodia." 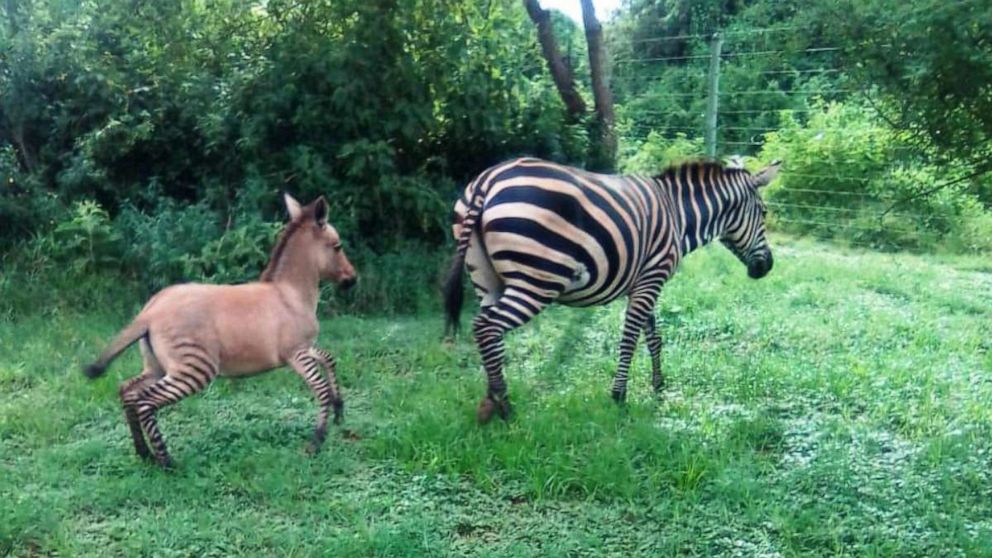 Sheldrickwildlifetrust.org/via Reuters
A baby 'zonkey', half zebra half donkey, walks behind his mum at Chyulu Hills National Park, Kenya mid-March, 2020.

"Evidence suggests that the majority of these activities were enabled by weakened enforcement efforts that people exploited, some driven by desperation, others by profit," officials said.

O'Brien-Onyeka said he sees this desperation himself. Many locals have lost their livelihoods and have started hunting for bushmeat and collecting charcoal for cooking, he said -- even though both are illegal.

"They may not be able to afford gas or other cooking materials," he said, "so nature becomes the place they can source those materials."

He also said he fears the effects of poachers driven by the promise of big profits, noting that as government funding is being shifted into finding a vaccine or buying ventilators and masks, protective measures for the environment have taken a back seat.

"Poachers are very good at utilizing loopholes," he said. "Add to that the fact that most of the people in outlying communities have lost their livelihood or source of income and would be looking up to anyone with real cash to profit -- so we are seriously concerned and we are not too surprised to see some increase in incidents of poaching."

Unlike National Parks that are protected by government rangers, O'Brien-Onyeka said that "a big percentage of the parks and protected areas in Northern Kenya are in community hands ... and they rely on tourism to generate revenue to hire rangers and pay different kinds of people to keep that ecosystem intact."

One community in Northern Kenya "made close to $300,000 in 2019 but this year they're flagging that they may make zero revenue," O'Brien-Onyeka said. "They have no money, tourism is shot down because of COVID, they can't pay their rangers -- it becomes a free-for-all."

MORE: Virus choking off supply of what Africa needs most: Food

O'Brien-Onyeka emphasizes that he doesn't want to be alarmist. "But it might get really worse," he said -- and now is the time to act. With governments contemplating bailouts and economic relief packages, he urges lawmakers to not "forget these communities that have secured ecosystems and wildlife for decades, for generations."

He says these communities rely on ecotourism to protect their delicate environments, but no one knows when tourists will come back.

"We need to find a way to support these communities so that they keep protecting these critical ecosystems that are very important here," he said.

But he also cautions against a quick fix.

"Places where there has been a ban on logging will say, 'We need more money, so we are going to allow logging for eight months just to make money to recover from this crisis,'" he said. "We suspect that many communities and countries will suspend those cautionary decisions in order to make quick gains."

The problem, he said it that "those quick gains may end up costing us a lot more ... when you mess up with nature, it's not like the banks collapsing; there are no bailouts, there are simply consequences."

"We are suffering the the consequences of messing around with nature, with COVID-19," he said. "We've gone through that with Ebola, and if we're not careful with the solutions we put on the table in order to get out of this crisis, past the pandemic, we might create more future problems for ourselves."