Antwon Rose II, a 17-year-old, was killed June 19, 2018, in East Pittsburgh, Pennsylvania. Officer Michael Rosfeld shot Rose after pulling over the unlicensed taxicab he was riding in, which was suspected to have been used in a drive-by shooting minutes earlier. Rose was a front-seat passenger in the cab and was shot as he fled. Video of the shooting was shared online, triggering protests in Pittsburgh. Rosfeld was arrested and charged with criminal homicide, but was found not guilty on March 22, 2019.

Antwon’s mother, Michelle Kenney, was one of seven mothers who sat down with ABC News' Deborah Roberts for "Good Morning America" to share the stories of the children they lost and their journeys as Black mothers in America.

In her own words, Kenney reflects on the life and legacy of her only son and shares her opinions on his tragic death and heart-breaking loss. 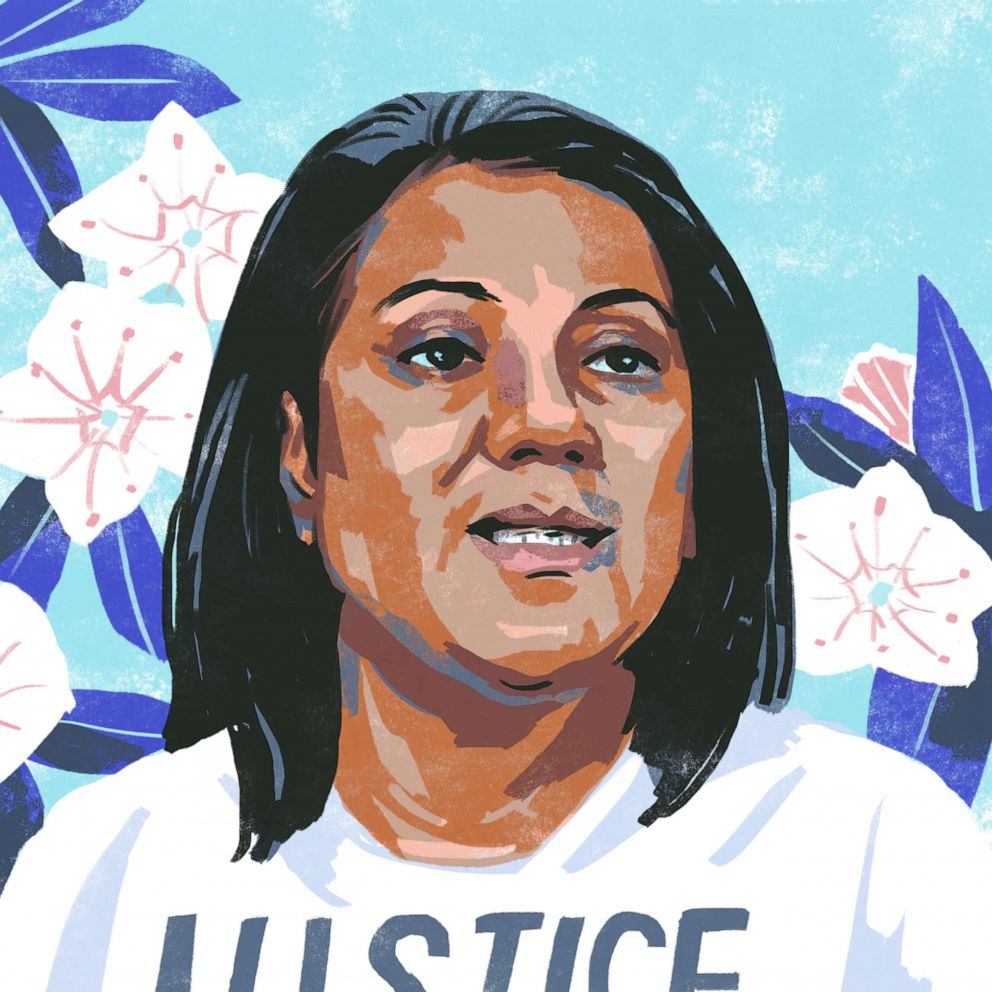 Illustration by QU Lan/Courtesy ABC News
Antwon Rose's mom Michelle Kenney: "I never imagined him losing his life to somebody who was sworn to protect and serve."
***

I just had no idea that he would have to die in order for that to happen.

I only had one son. You have fights with your kids but even as a teenager I knew he loved me. He knew I loved him, too. Antwon was my everything. 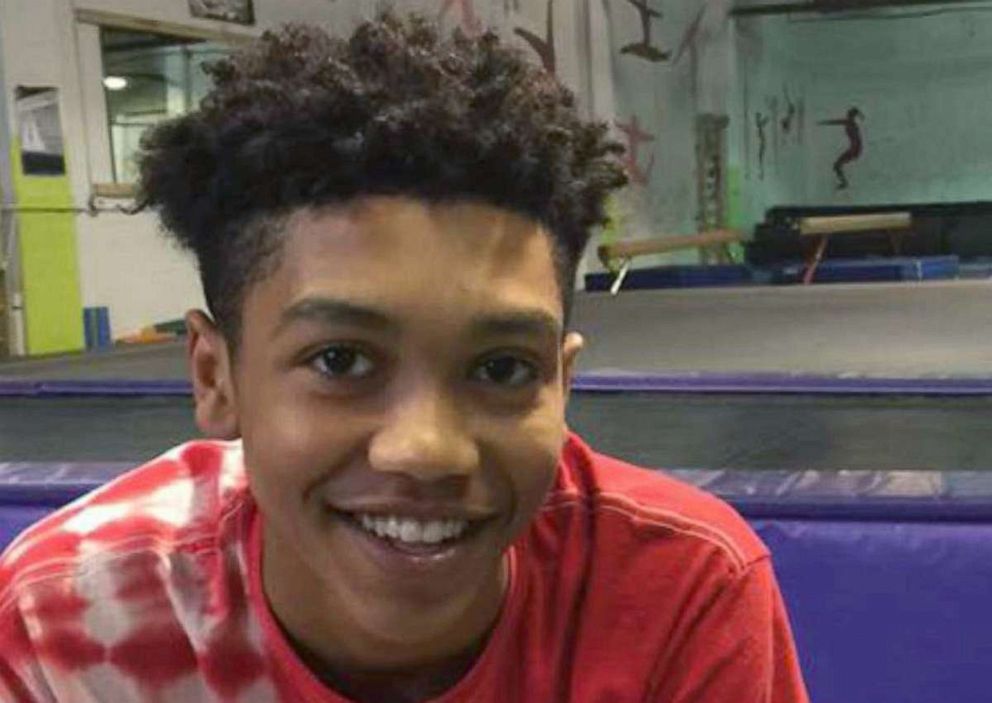 My daughter and I are close, but we're a lot alike. We're outgoing, we're boisterous, we're loud. Antwon was none of that. He was just so different. He was so kind, so gentle, so understanding.

When he was little, my daughter and I would laugh because Antwon would give popsicles to the kids up and down the street. He didn't care if he wasn't playing with you. He gave them out anyway.

He was funny. His facial expressions were always unbelievable. If you wanted to know what Antwon was thinking, all you had to do was look at his face. He had jokes for days.

Antwon's talents were endless. Antwon could ski, snowboard--as a matter of fact, one of his friends said at his funeral that he was the best snowboarder he ever met. Antwon played the saxophone and the guitar and loved basketball, but he wanted to work rather than playing high school ball. 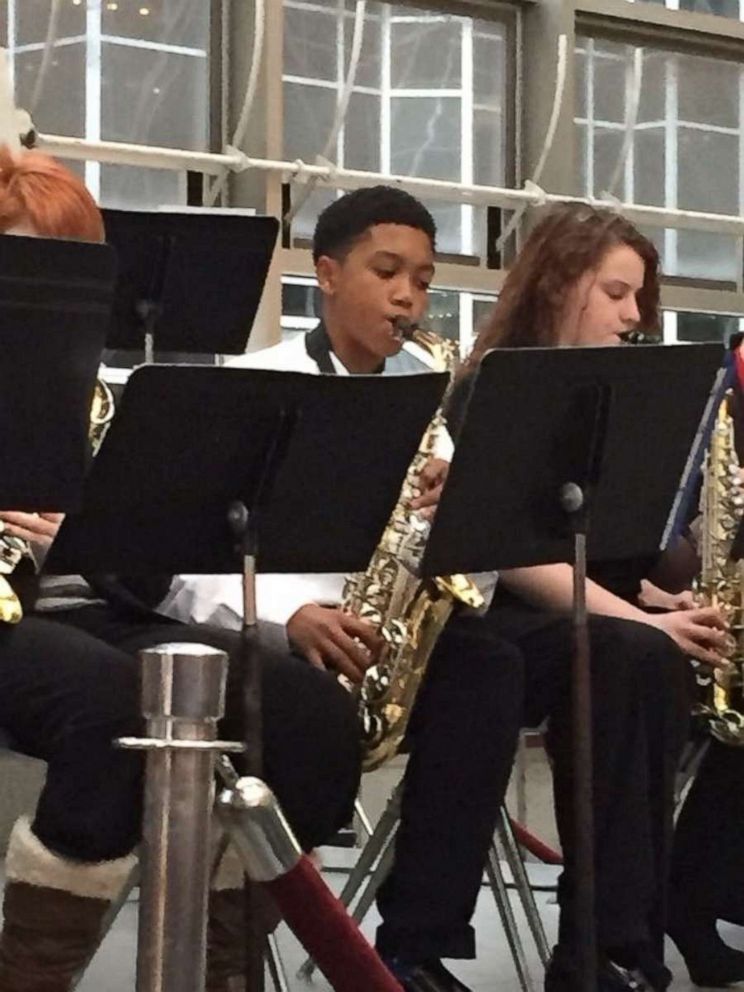 When Antwon was in the fourth grade, I got a call from the principal. She asked me to come in. I was worried because he had never gotten in trouble. She ended up calling because she could not believe that Antwon wasn't in the gifted program. And back then, there weren't any Black kids in the gifted program. She pushed for him to be in that program because she knew that's where he belonged.

About two days before Antwon was murdered, we had a family meeting. The family meeting was about staying out of the way. We didn't live in the greatest neighborhood, so I worried about him coming home and back. I sat on my porch every day and waited for him to come home, whether it was from school, work, I would look up the street, make sure he was coming and make sure no one interfered with him making it home.

I am confused and afraid

I wonder what path I will take

I hear that there’s only two ways out

I see mothers bury their sons

I want my mom to never feel that pain

I am confused and afraid

I realized he heard me all those years, and all those family meetings because that poem is exactly what we talked about. Had I known about it I probably would have stopped asking him, "Do you hear me?" 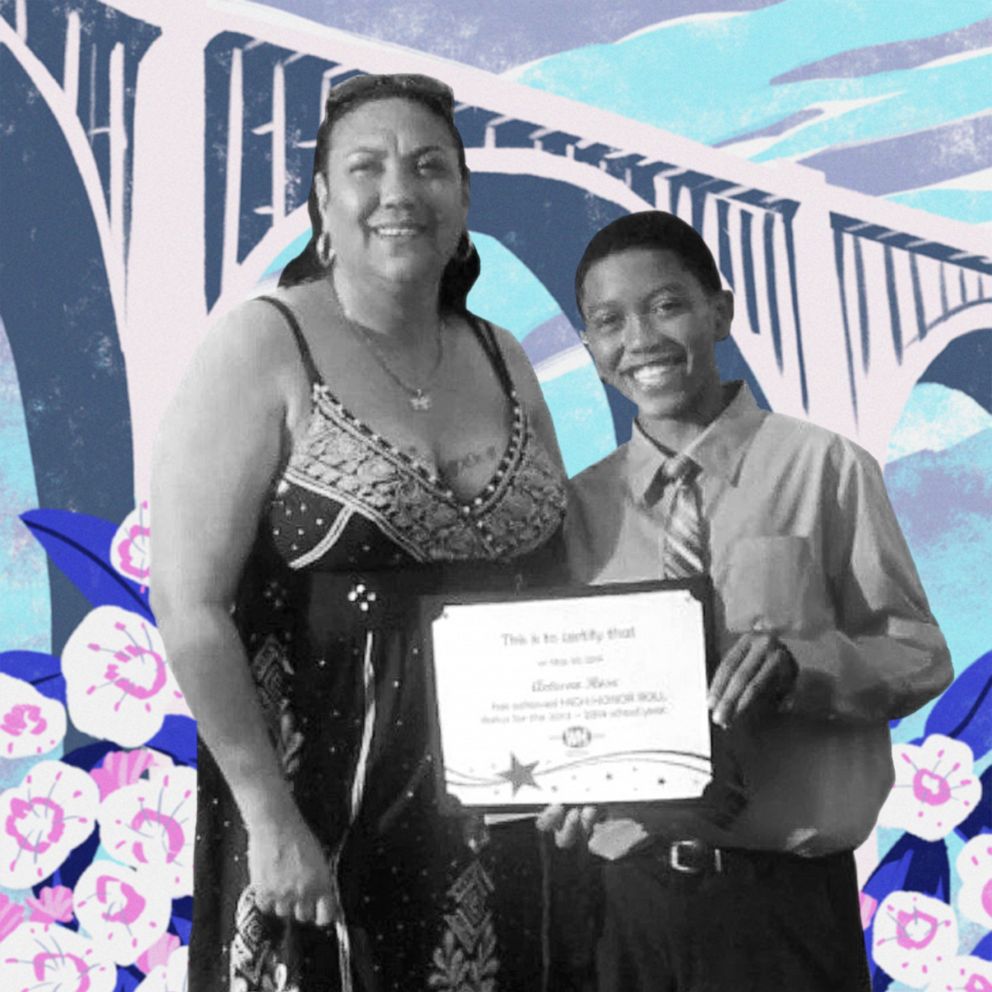 I'm biracial and Antwon was raised to hang out with white kids. Antwon knew he was Black as far as common sense, but based on the people he hung out with, he didn't understand what that meant. I felt that if anything was to ever happen or the police were called, even if he was at a party, they would automatically blame Antwon. The blame would be put upon him before they would be put upon the kids he hung out with. That's the harsh reality, but it's our truth.

I worked at a police department for over a decade. I was the administrative assistant to the chief of police and the mayor. I saw a lot of things that I didn't think were right.

I got fed up with the idea of there not being any accountability. I’d see people come in to file civilian complaints, and say they were harassed or their civil rights had been violated and nothing happened.

As much as I tried to encourage people to take their complaints elsewhere and take other actions, I felt like it was useless. I felt like I was beat down by a system that was designed only for police.

Don’t get me wrong. I worked with a lot of great people, but it’s amazing, the stuff the bad ones get away with. To get a call and hear an officer got fired from somewhere else and that’s why they ended up here, it's just unbelievable. And when you're responsible for the paperwork when they’re getting hired, it's hard to handle.

The day Antwon was murdered was actually the first day he was outside in three days. It was hot and we just laid around watching TV. It was a few days of hanging out with my son. I'm grateful I had that because I didn't expect that the day he went outside, he wouldn't come home.

Antwon was known to check in. He knows I call him and if he doesn't answer, I worry.

I saw him at 6 p.m. so when I called him at 8 p.m. and he didn't answer I panicked. I jumped up off my couch and I called my daughter saying, "Call your brother. He's not answering."

I remember my texts went from, "Call me, Antwon. I'm worried” to “Antwon, please call me." I didn't know there was a kid, dead. I just knew that as his mother, something was wrong.

I walked out in the community and people started saying, "There's a 12-year-old that's dead in East Pittsburgh." I immediately said, "That's it." My daughter kept saying, "Mom, there's no way. He's not 12." Antwon doesn't hang out in East Pittsburgh but for some reason, I knew it was my son.

As I was driving to the place where Antwon was killed, I ran into a bunch of police officers at the first location. They all gave me the run-around. It all showed up that day -- disrespectful, arrogant, and unbelievably ignorant. Luckily there was a cop there who knew me. He said, "Michelle, Antwon’s not that type of kid but if you believe it's him, go to McKeesport Hospital.”

On my way to the hospital my daughter called me and said, "Mom, you need to call granddaddy before you go."

My dad is a police officer in another jurisdiction. If I needed to call him before I got to the hospital, I knew what that meant.

Allegheny County Police never told me Antwon was killed by a cop. Instead, they wanted more information about what Antwon did that day. I told them, "I just need to know if my son is dead."

The cop told me, "I'm not telling you anything."

My 17-year-old is laying there and the cop is telling me that if I don't answer his questions, he can't tell me anything. Instead of telling me if my son was dead, the cop told me that they found $300 in Antwon’s pocket as well as a clip from a gun. The officer wanted to know where the money came from.

An officer who is also an EMT showed up on the scene. He could not believe that they didn't try to save Antwon’s life. At the trial, he testified that Antwon had nothing in his pocket. When he made that statement, they came back and said that clip did not have Antwon's fingerprints on it. How could a clip end up in a pocket in the skinny jeans he had on and not have his fingerprints on it?

I'm not an advocate for defunding the police. But my teenager took longer to get his driver's license than the amount of time it would take for you to become a police officer. How does that make sense?

I'm doing my best to make him proud because I wasn't there to protect him that day from this man who murdered him.

I know for sure the changes that I want to make, Antwon would support them wholeheartedly.

I always wonder if Antwon is proud of me. I struggle with that every day. I'm doing my best to make him proud because I wasn't there to protect him that day from this man who murdered him.

Today, he would've been in college. I would probably be calling them on the phone every day making sure he went to class. I just miss having my kid in the house. 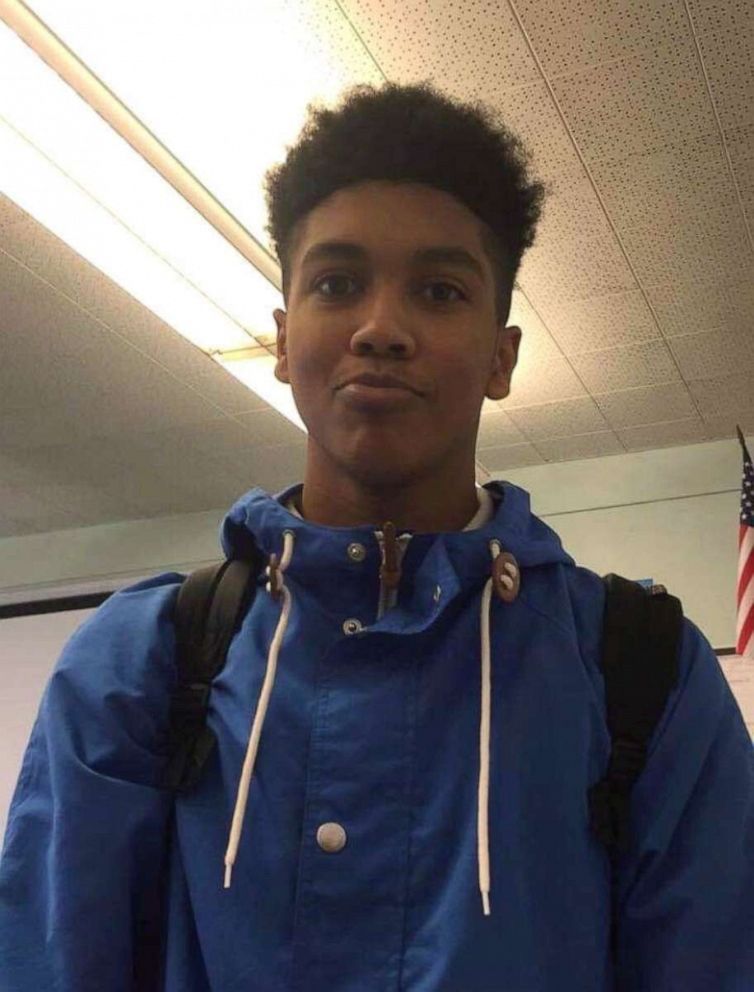 I pray it changes so nobody else has to go through this.

I've talked to Tamir Rice's mom. She gives me the best advice, even when I don't want to hear it. I've spoken to Botham Jean's mom. I check on her, she checks on me. DJ Henry's mom is unbelievably amazing. That's just a beautiful soul. And my closest relationships are here with the mothers in Pittsburgh. We’ve had four police shootings since Antwon’s murder and none of them have received the attention that Antwon did. Those are the moms I check on because they’re right here in my city.

If I could speak to Antwon I’d tell him that I love him and that I'm sorry--so sorry. Like I said, I always knew he was going to do something big. I thought he would discover a medicine or something like that.

I never thought he would have to be murdered to make a difference. 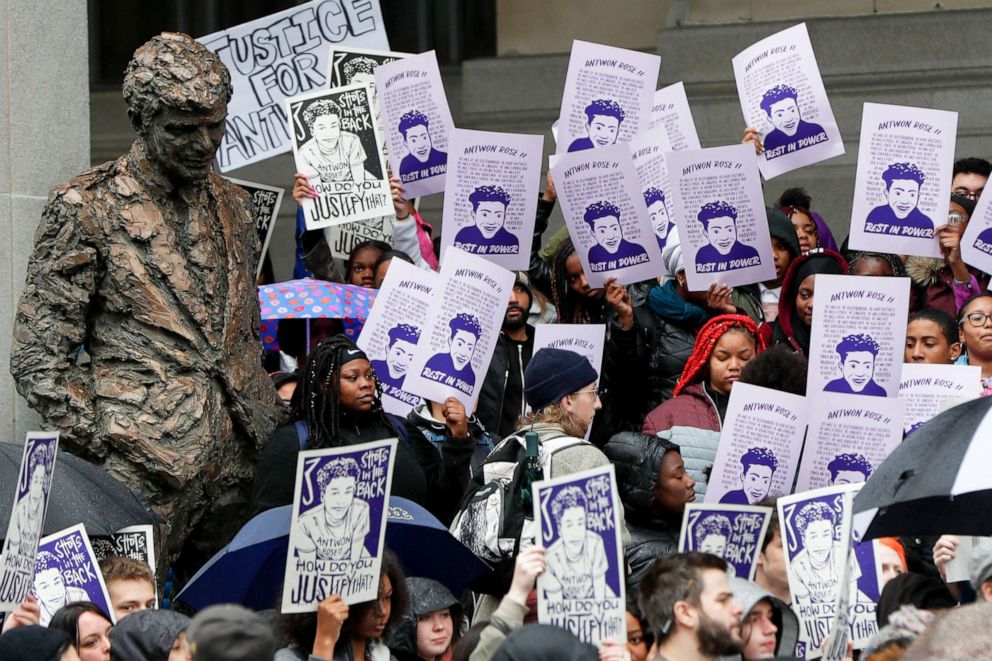 Keith Srakocic/AP
Marchers gather at the City-County building near the statue of former Pittsburgh Mayor Richard S. Caliguiri before taking to the streets in Pittsburgh, March 25, 2019. The group called for justice after former East Pittsburgh police officer Michael Rosfeld was acquitted on in the homicide trial where of 17-year-old Antwon Rose Jr.

The views and opinions expressed in this article belong solely to the author and do not necessarily represent the views of ABC News.