President Donald Trump's calls for James Comey to be jailed are "not normal," the former FBI director said in a live appearance on "Good Morning America" today.

"That is not normal," Comey said. "That is not OK. First of all, he's just making stuff up. But, most importantly, the president of the United States is calling for the imprisonment of a private citizen, as he's done for a whole lot of people who criticize him. That is not acceptable in this country."

This morning's appearance on "Good Morning America" was the former FBI director's first live interview at the launch of his book tour, having already given taped interviews including his first with ABC News, which aired on Sunday.

Comey pointed to the tweets as examples of how he says Trump misunderstands or disrespects the rule of law.

"I hope people read the book and see why the rule of law is such an important value in this country, and key to that is that the president doesn't get to decide who goes to jail," Comey said of his new book, "A Higher Loyalty: Truth, Lies, and Leadership,” which was released today.

Trump's tweets and accusations have numbed the U.S. public, Comey said, expressing hope that his book will serve as a wake-up call.

“We’re numb to it,” he said. “We wake up in the morning and see the president of the United States is accusing people of crimes without evidence and pronouncing them guilty and saying they should be in jail. That should wake all of us up with a start, but there's been so much of it that we're a little bit numb and that's dangerous.” 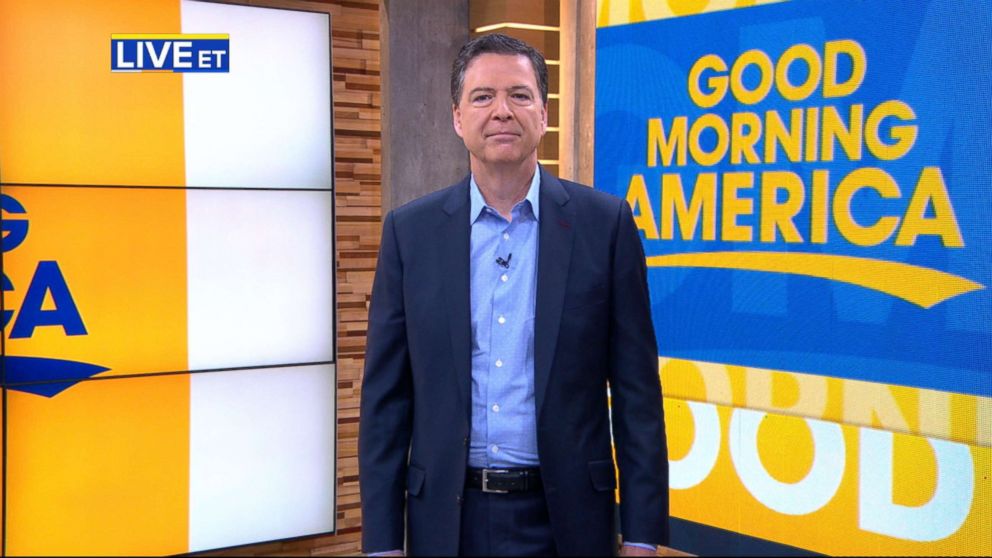 "The big questions in Comey’s badly reviewed book aren’t answered like, how come he gave up Classified Information (jail), why did he lie to Congress (jail), why did the DNC refuse to give Server to the FBI (why didn’t they TAKE it), why the phony memos, McCabe’s $700,000 & more?" Trump wrote.

The big questions in Comey’s badly reviewed book aren’t answered like, how come he gave up Classified Information (jail), why did he lie to Congress (jail), why did the DNC refuse to give Server to the FBI (why didn’t they TAKE it), why the phony memos, McCabe’s $700,000 & more?

A day later, Trump accused Comey of "[commiting] many crimes."

Comey drafted the Crooked Hillary exoneration long before he talked to her (lied in Congress to Senator G), then based his decisions on her poll numbers. Disgruntled, he, McCabe, and the others, committed many crimes!

"Comey drafted the Crooked Hillary exoneration long before he talked to her (lied in Congress to Senator G), then based his decisions on her poll numbers. Disgruntled, he, McCabe, and the others, committed many crimes!" he tweeted Monday.

He discussed two recent incidents that Comey says demonstrates Trump's lack of understanding of the U.S. legal system was when he called the FBI's raids of his lawyer Michael Cohen's office, home and hotel room "an attack on our country." 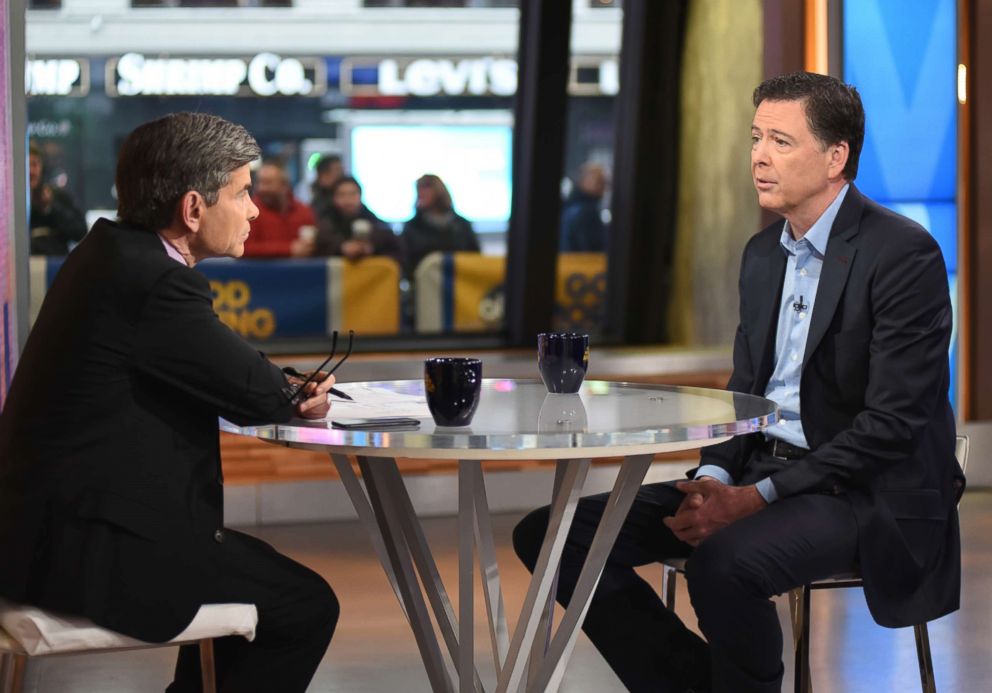 "Yeah, it shows me he either doesn't know or doesn’t care what the rule of law looks like,” Comey said. “Nobody broke into anybody's office. It doesn't happen. The FBI gets a search warrant from a federal judge and conducts itself professionally, completely and politely by the accounts of the people involved. So it's a total distortion of the way things work.”

Trump’s recent pardoning of Scooter Libby, a chief of staff to then-Vice President Dick Cheney, was “an attack on the rule of law,” Comey said.

“There's a reason president George W. Bush, for whom Scooter Libby worked, refused to pardon him after looking at all the facts in the case. It was an overwhelming case. There's no reason that's consistent with justice to pardon him. And so it's an attack on the rule of law, in my view,” Comey said.

Comey also responded to the belief by some that he took cheap shots at the president in his book -- which were repeated in the ABC News special Sunday -- in commenting on the color of the president's skin, the size of his hands and the length of his tie.

Comey opens up about the shocking way he found out he was fired by Trump
'Morally unfit': The moments that mattered in James Comey's explosive interview
Comey weighs in on 5 key political players in his exclusive interview with ABC News

"I'm trying to be an author,” he said, “and bring the reader into the room.” 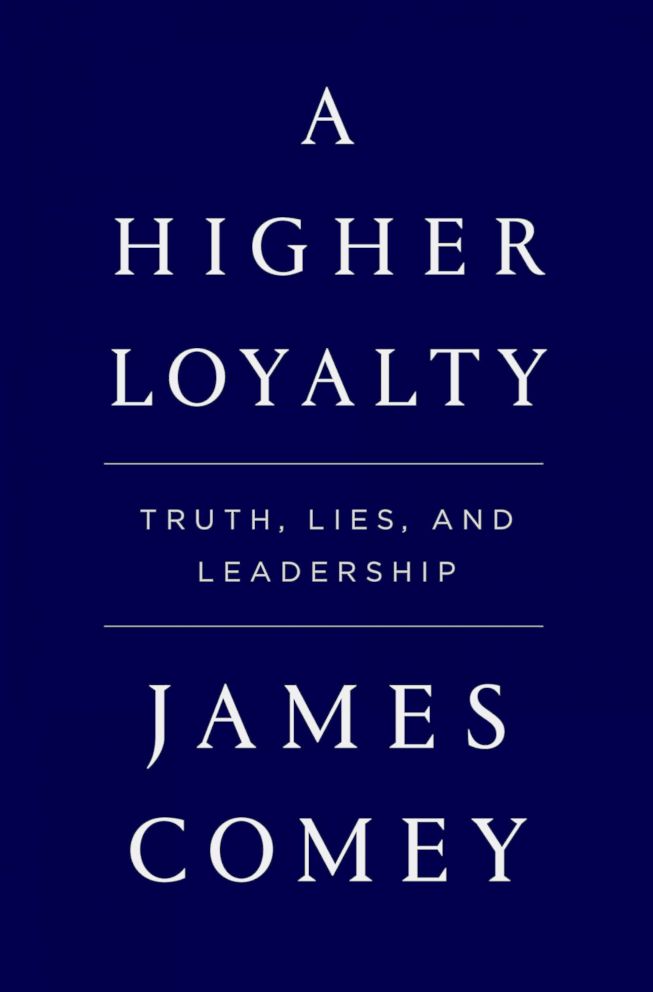 Comey, 57, also raised concerns about former Attorney General Loretta Lynch, who was his boss during the Obama administration. Lynch's actions during the Clinton email saga "worried" him, he said in his book and in the ABC News special.

In the hours before the interview aired, Lynch released a lengthy statement saying she "did what I always do: rise above politics and uphold the law." Comey never came to her with any concerns, she also noted.

When asked this morning whether he should have, Comey said, "maybe, but I really don't think so even in hindsight."

"There should have been a discussion about whether she should be involved in the matter but what she did was say, ‘I’m going to stay involved, but I'll accept his recommendation,’ which put me and the FBI in a terrible spot," he told Stephanopoulos today.

Comey's book focuses on leadership and he pointed to two people -- one of whom he knows well and one he has never met -- who serve as examples for him.

The first is his wife of more than three decades, Patrice Comey. He described their courtship as "a series of events of me chasing her, trying to convince her to love me."

He discussed a moment of her leadership, which he says should serve as an example to others, that came in the wake of the death of their son Collin, who was "born healthy and died a little over a week later from a preventable infection." 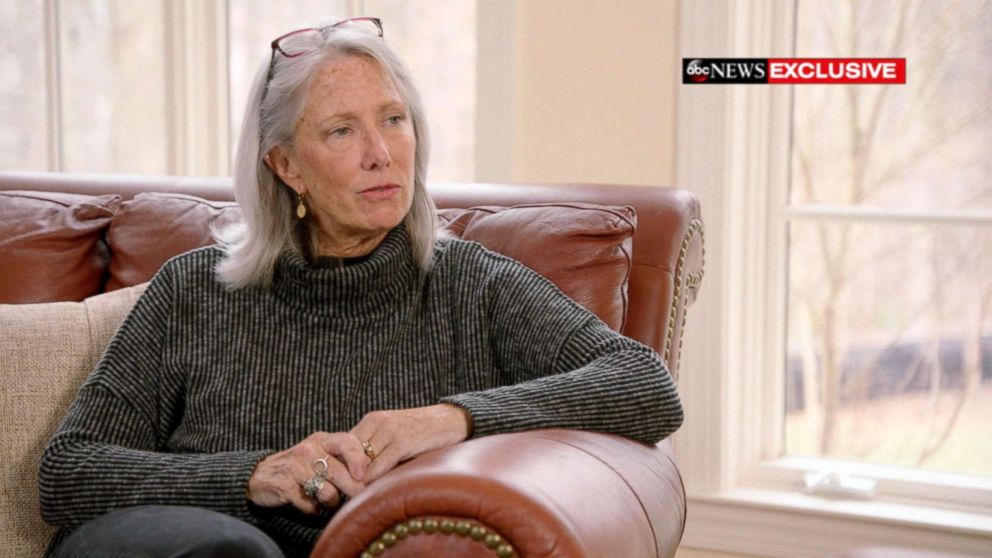 “She made it her mission to try to change medical practice across the country so that all mothers will be tested for this bacteria, which is harmless to the moms but can kill their babies. And so if you have a baby today in the United States you are tested for group B strep and if you have it, you're treated with antibiotics during delivery and your baby will be fine,” he said.

“She took something awful and turned it into something good, which is the reason it's in the book, which is about leadership. It changed how I think about being a person and being a leader,” he added.

The second source of inspiration is a person better known to the world: NBA player LeBron James.

Comey called James "a man I've never met," whom he says he resembles "only in being the same height."

"I used to talk about him all over the FBI. He illustrates what the endless pursuit of excellence looks like. ... It's because he measures himself not against the others but against himself," Comey said.

He said that he read that James, whom he called “the best basketball player on the earth today,” looks for ways to improve his game during the off-season.

During his tenure at the FBI, Comey would extend that example to the bureau, saying, "we have to find parts of our game to make better -- look at LeBron James!"