Since Election Day, the Trump campaign has brought a series of lawsuits around the country in an effort to find a path to reelection, but four judges in different states have now weighed in with striking consistency and similar language -- finding there is no sufficient evidence to back the claims.

This week, judges in Nevada, Georgia, Pennsylvania and Michigan have rejected the campaign's efforts to halt the counting process, if only temporarily, or alter it in some way based on shaky allegations of improper or nefarious conduct.

When Trump's lawyers took their complaint about election observers being denied sufficient access to watch the processing of ballots, U.S. District Judge Paul Diamond appeared startled when the lawyers then acknowledged that the observers had, in fact, been permitted within 15 feet of the poll workers.

In Georgia this week, a judge rejected the campaign's effort to force Chatham County to separate and account for late-arriving ballots over a concern that the county may be mishandling ballots, an allegation based on an incident involving one out-of-state poll worker involving just 53 ballots. The judge said he saw "no evidence" to back up the claim.

And just hours later, a Michigan judge denied the campaign's effort to halt absentee ballot counting in Macomb County, Michigan, home to Detroit, over allegations that Trump campaign observers were not given "meaningful access" to observe the process.

"Come on now," Michigan Judge Cynthia Stephens said while looking over the evidence presented by the president's lawyers, which alleged a poll watcher had been instructed to back-date late-arriving mail-in ballots to make them count. "What I have, at best, is a hearsay affidavit." 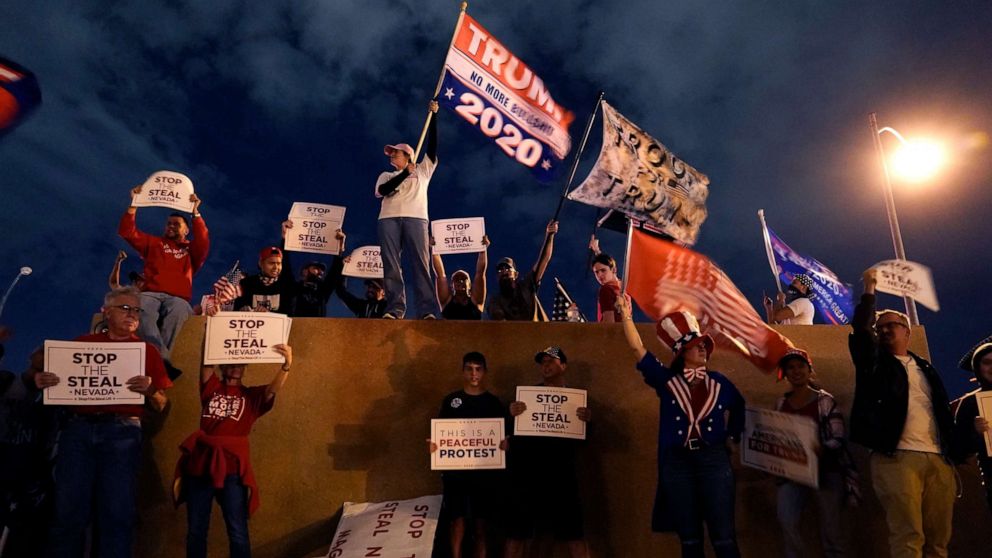 Most recently, a judge in Nevada on Friday night denied an effort to toss out signature-verification machines in Clark County, home to Democrat-stronghold Las Vegas, based on what the campaign said was "lax procedures for authenticating mail ballots." U.S. District Judge Andrew Gordon said he didn't think the Republican Party arrived in court with "sufficient evidence" to support its claims.

As part of the lawsuit, the Nevada GOP also attempted to get closer-up access for observers -- similar to demands in Pennsylvania and Michigan. The party's lawyer argued that observers should be close enough to hear everything poll workers were saying. The judge pushed back, asking what they would do if someone was soft-spoken.

"At what point does this get ridiculous?" the judge asked.

MORE: Election 2020: A look at Trump campaign election lawsuits and where they stand

So far, the localized incidents that the campaign has used in an effort to elevate allegations of misconduct have been unable to convince judges to grant the campaign the large-scale relief it is seeking. The president and his allies have nonetheless continued to insist they had evidence of misconduct at press conferences and on social media.

"When America sees everything we are uncovering they will be disgusted," insisted Donald Trump Jr., the president's son, in a tweet early Friday morning.

In a statement released Friday, Trump said he planned to continue to explore legal avenues.

"We will pursue this process through every aspect of the law to guarantee that the American people have confidence in our government," Trump's written statement said. "I will never give up fighting for you and our nation." 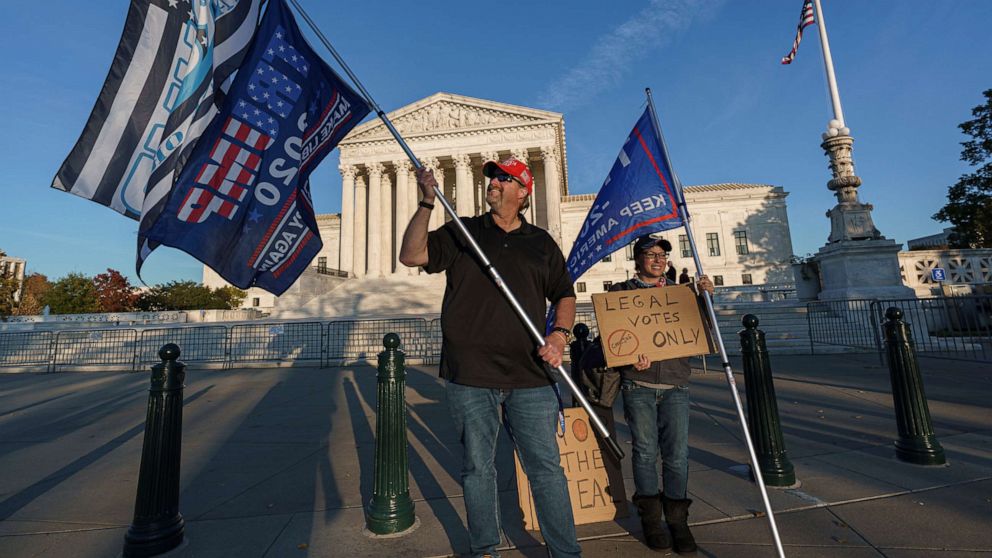 J. Scott Applewhite/AP
While waiting for a result in the election, Scott Knuth of Woodbridge, Va., and Christy Pheagin, of Washington, stand outside the Supreme Court in Washington, Nov. 6, 2020.

Some cases the campaign is pursuing have pressed forward. One Pennsylvania state judge agreed to give the campaign's observers closer access to election workers. And U.S. Supreme Court Justice Samuel Alito ordered Pennsylvania officials to segregate late-arriving mail-in ballots on Friday in case the high court decided to weigh their validity.

Still, the senior attorney for Democratic nominee Joe Biden said he has yet to see legal action he considers capable of impacting the outcome of the election.

"The lawsuits are meritless," attorney Bob Bauer said Thursday. "All of this is intended to create a large cloud that, it is the hope of the Trump campaign, that nobody can see through. But it is not a very thick cloud. It's not hard to see what they're doing. We see through it. So will the courts, and so do election officials."

MORE: 5 false or misleading statements Trump made in post-election remarks

Myrna Perez, a director at the nonpartisan Brennan Center for Voting Rights, wrote Friday that she considers the lawsuits filed so far to be "frivolous," and she does not think they will ultimately impact the outcome of the election.

"Our judiciary is supposed to protect the right to vote, but we're not seeing a lot respect for the role of the judiciary," Perez wrote. "Federal and state courts are getting tied up in disputes that other courts have spoken on or that grown-ups should be able to work out (or both)."

On Friday, the Trump campaign tapped conservative activist David Bossie to develop a cohesive legal effort as the president maps out a path forward. Appearing on Fox News Friday evening, Bossie was asked how he intended to turn complaints about a lack of access for poll observers into a remedy that would help Trump's election chances.

"The campaign's figuring out exactly what our legal remedies are," Bossie replied. "We're going to fight for every single legal vote, and we're going to make sure we fight for those illegal votes to be thrown out."