A mother says she was pushed to her breaking point Thursday when she was kicked off an American Airlines flight after her two-year-old son would not wear a mask.

"I tried repeatedly, begged him, bribed him, pleaded with him, did everything I could while he was screaming and crying as I tried to hold him and put the mask on, feeling my absolute lowest of lows as a mother," Rachel Davis posted on Instagram.

Davis was on a work trip in Florida when Hurricane Sally moved in.

"We tried to get out earlier but they canceled our flight," Davis told ABC News. "The eye of the storm went right over us early Wednesday morning and we lost power where we were staying."

She said they were exhausted when they finally boarded their flight home to Manchester, New Hampshire. Shortly after Davis took her seat she said the flight attendant informed her and her "overtired" son that if she could not get him to wear a face covering they would be asked to leave the aircraft.

All passengers, including Davis and her son, were forced to deplane because of the incident.

"It was very cold and cruel," fellow passenger Taylor Cournoyer said. "This wasn't an issue of a grown adult not complying out of spite because they don't agree with masks -- this was a child. And it was not a bad, irresponsible mom either -- she was crying and trying to keep the mask on and asking the flight attendants for help and advice on what to do."

MORE: Airlines may ban passengers who refuse to wear masks

Cournoyer captured a video of Davis at the gate area pleading with crew and passengers. 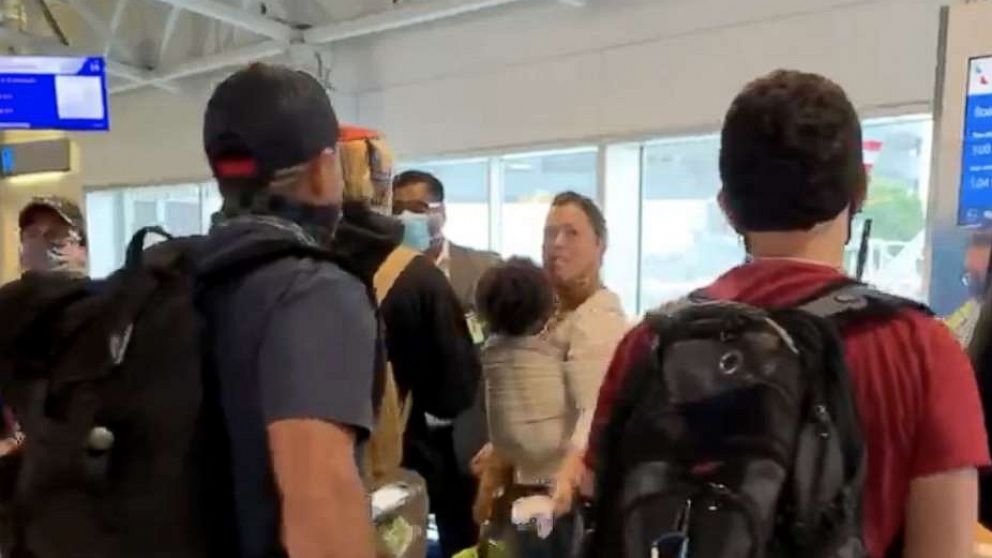 Taylor Cournoyer
"What do you want me to do, duct tape his face?" the mother can be heard asking after getting kicked off a flight Thursday because her two-year-old refused to wear a mask.

All major U.S. airlines require any child age 2 and over to wear a mask in order to fly, but the policy has come under scrutiny as more stories of parents with small children being kicked off flights surface.

In late August, a mother and her six children were kicked off a JetBlue Airways flight because her 2-year-old daughter refused to wear a mask.

Davis is now calling on the airlines to update their policies, inspiring a Change.org petition for airlines to raise the minimum mask requirement age. Her Instagram post has received nearly 200,000 likes in three days.

"I don’t want any other mother to feel this way," Davis said.

The pilot then made an overhead announcement, according to a video Cournoyer shot, telling passengers, "I hate to talk like this but once we get going if there are any problems, if you guys give them any problems at all about the decisions that I have made we will turn the flight around and we will come back."

"The whole situation was an example of how we as a society have forgotten to treat each other with kindness and compassion," Cournoyer said. "The crew and staff were acting like authoritative dictators."

Davis and her son boarded another American Airlines flight home on Thursday, and she said the pilot on the second flight apologized profusely.

"To ensure the safety of our customers and team, American Airlines requires all persons 2 years and older to wear an appropriate face covering throughout the entirety of their travel journey," American Airlines said in a statement. "Policies are enforced and approved face coverings are made available at key points throughout the customer journey. We’ve reached out to the family to learn more about their recent travel experience and to address their concerns."