Michelle Kenney and Antwon Rose Sr. did something Sunday they never thought they would ever have to do: Go to a funeral home for the wake of their 17-year-old son, Antwon Rose II.

But before getting in a car and driving to the Tunie Funeral Home in Homestead, Pennsylvania, the grieving mother and father had much to say about their child and the police officer who shot him dead on a street near their small town, a suburb of Pittsburgh. 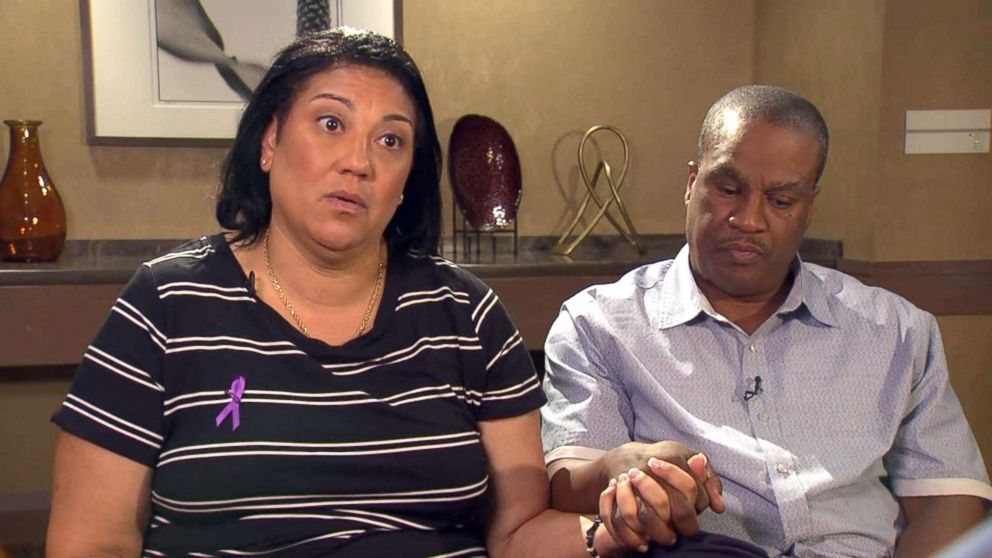 ABC News
An interview of the parents of Antwon Rose Jr., the unarmed 17-year-old who was shot and killed by a police officer on June 19, 2018 in East Pittsburgh.

"He murdered my son in cold blood," Kenney told ABC News exclusively of the shooting Tuesday night when police said her unarmed son ran from an officer who opened fire after the teenager made only a few strides to get away.

"If he has a son, I pray his heart never has to hurt the way mine does," Kenney said of the police officer. "But I think he should pay for taking my son's life. I really do." 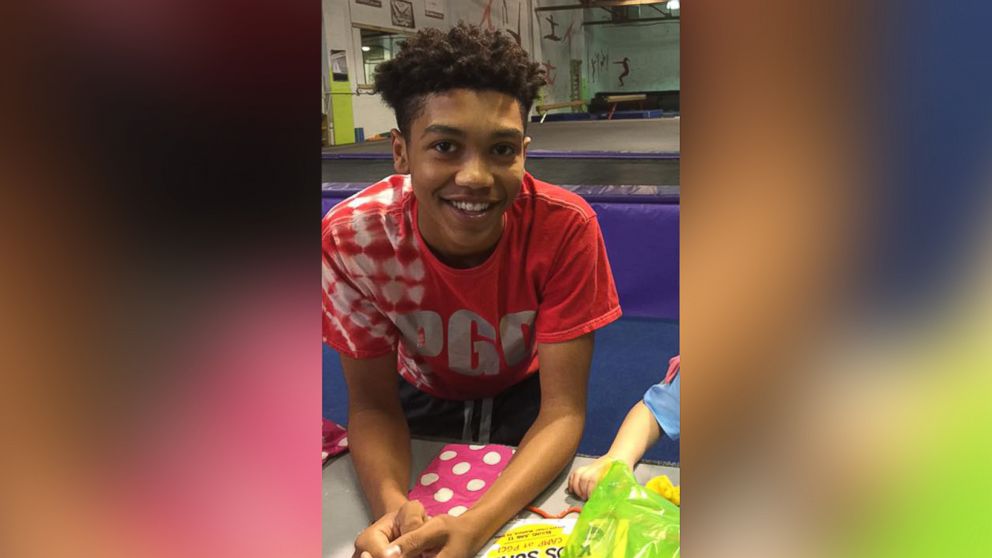 Antwon Rose/Facebook
An undated photo of 17-year-old Antwon Rose who was shot and killed in Pennsylvania June 19, 2018.

As she spoke through jags of tears, Kenney clutched a Bible in her lap with the words "My son" written on a piece of paper and taped to the cover. On the front of her striped dress, she wore a purple ribbon, which she says was her son's favorite color.

She spoke of how her son -- whom she nicknamed "My Baby" -- had traveled around the world, taught himself to ski and play hockey. He had dreams, she said, of going to college and becoming a chemical engineer or a lawyer.

The teenager was riding in a silver Chevrolet that officials said was suspected of being involved in a drive-by shooting in North Braddock that left a 22-year-old man wounded. East Pittsburgh Police Officer Michael Rosfeld pulled the vehicle over around 8:40 p.m. on Grandview and Howard streets in East Pittsburgh, about 10 miles southeast of Pittsburgh.

Allegheny County Police Department, which is investigating Antwon's death, said in a statement that Rosfeld pulled the car over because it matched the description of the vehicle involved in the drive-by shooting and that he noticed a bullet hole in the rear window.

While Rosfeld was putting the driver into handcuffs, Antwon and another passenger in the car bolted, according to the police statement. Rosfeld fired his weapon at Antwon, hitting him three times in the upper body, according to the Allegheny County Medical Examiner, who did not specify where on his upper body Antwon was shot. 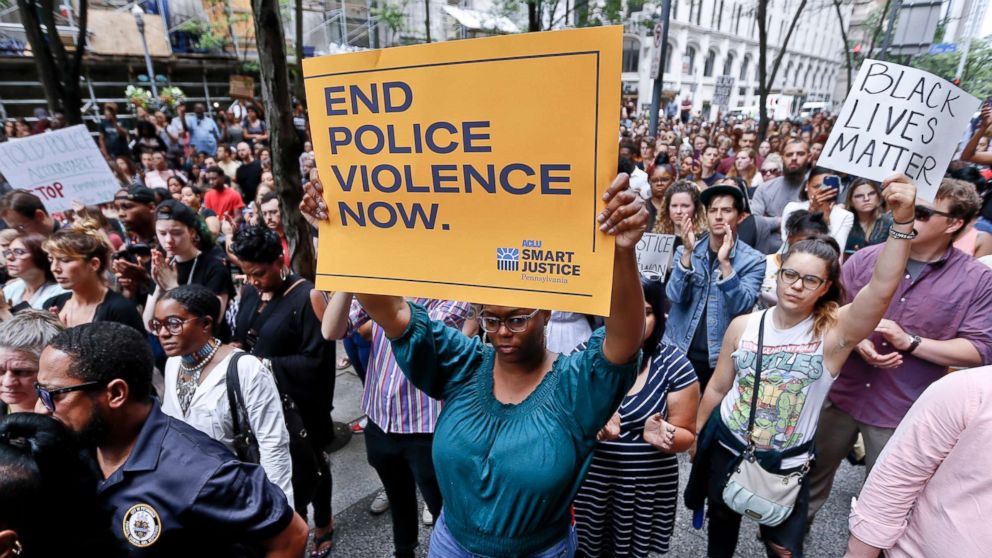 Keith Srakocic/AP
Protesters rally in front of the Allegheny County Courthouse June 21, 2018, in Pittsburgh for the killing of Antwon Rose Jr.

Antwon was taken to nearby University of Pittsburgh Medical Center McKeesport, where he died.

Police said two guns were found inside the car, but Antwon was unarmed when he was shot. Police found a 9mm ammunition clip in his pocket, officials said.

Had it not been for a cell-phone video Shauny Mary, 23, took of the shooting, the story might have ended there. Mary posted her video on social media, sparking angry protests in the streets of East Pittsburgh and elsewhere.

Obtained by ABC News
Antwon Rose, 17, was shot and killed by a police officer in East Pittsburgh, Pa., June 19, 2018. The shooting was captured by a bystander on cellphone video, which is being reviewed by authorities. 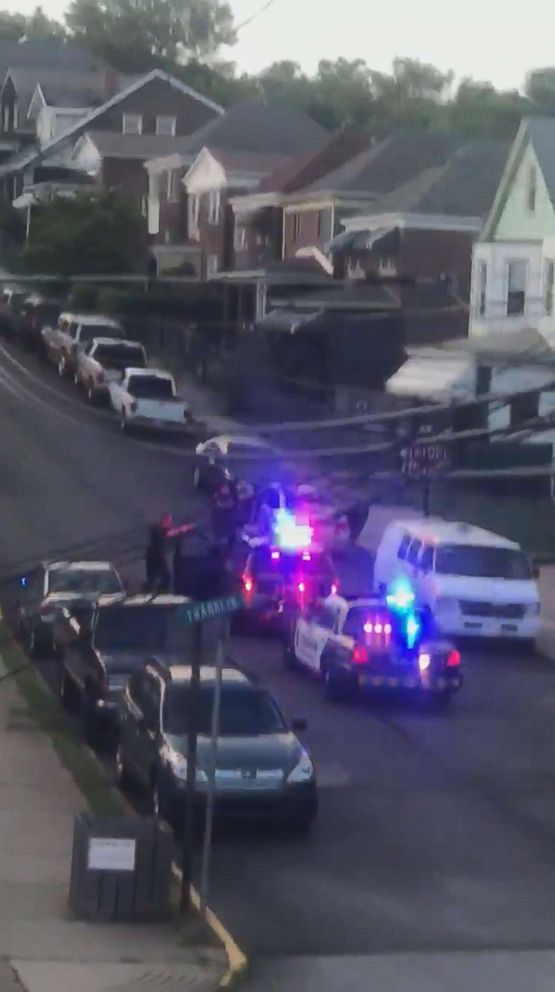 Obtained by ABC News
The shooting of Antwon Rose, 17, by a police officer in East Pittsburgh, Pa., June 19, 2018, was captured on cellphone video by a bystander.

The video shows Antwon and another man running from the car. Antwon, dressed in a white T-shirt, got about 10 feet before three gunshots sounded and he fell to the ground.

"It was like he was taking target practice out on this young man's back," Mary told ABC News. "He didn't flinch, he didn't say stop running, he didn't say anything."

Antwon Rose Sr. said he saw Mary's video before it went viral. He said he initially didn't realize it was his son because people were saying the boy who was shot was 13 years old.

"I never thought that was my son," he said.

Michelle Kenney said she can't bring herself to watch the video. 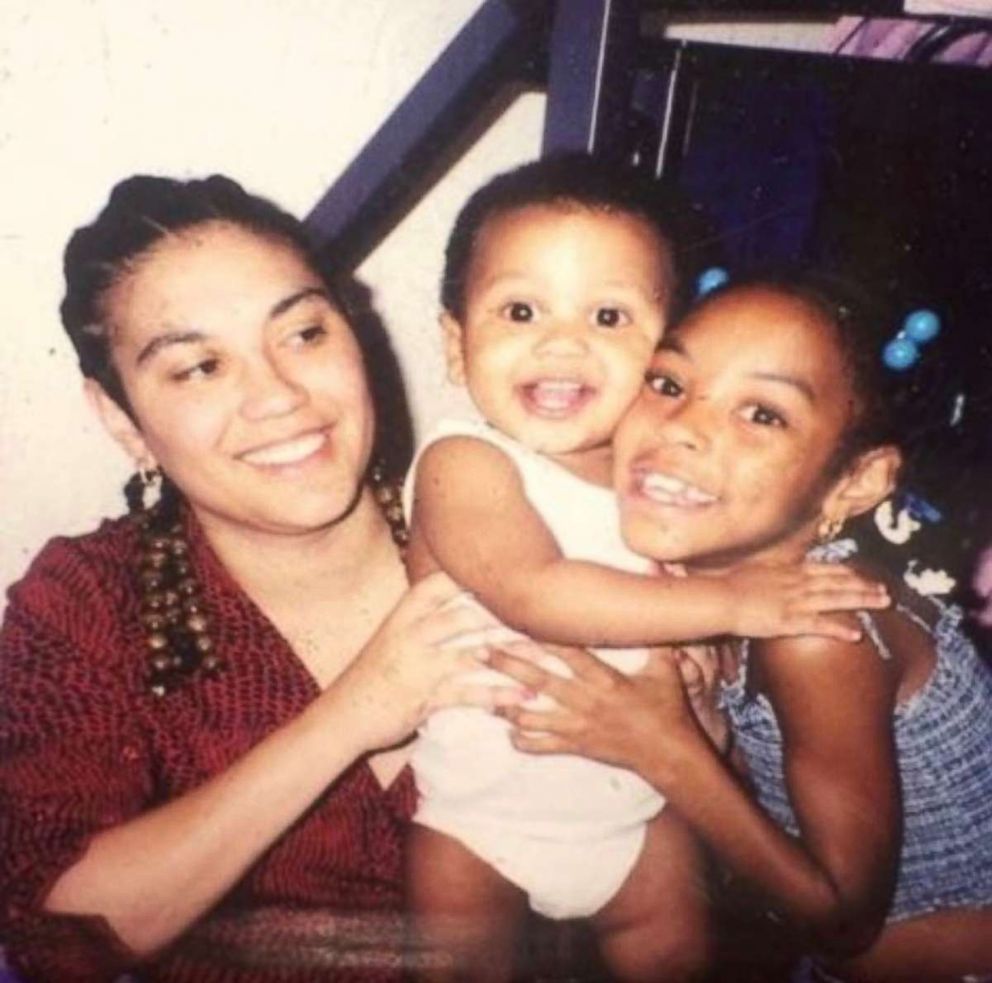 "If there wasn't [a video], we wouldn't be having this conversation because a thousand people could have stood up and the world wouldn't have believed them because he was murdered by a cop and people don't seem to think that they tell a lie," Kenney said. "So by the grace of God, there is a video."

She said she doesn't understand why Rosfeld is still on the police force.

ABC News has reached out to Rosfeld's attorney several times for comment but have not heard back. The district attorney said Rosfeld is cooperating with the investigation.

Rosfeld, 30, broke his silence Thursday when he told ABC station WTAE-TV in Pittsburgh that the shooting occurred just three weeks after he joined the East Pittsburg Police Department and just hours after he was officially sworn in as an officer on the force. 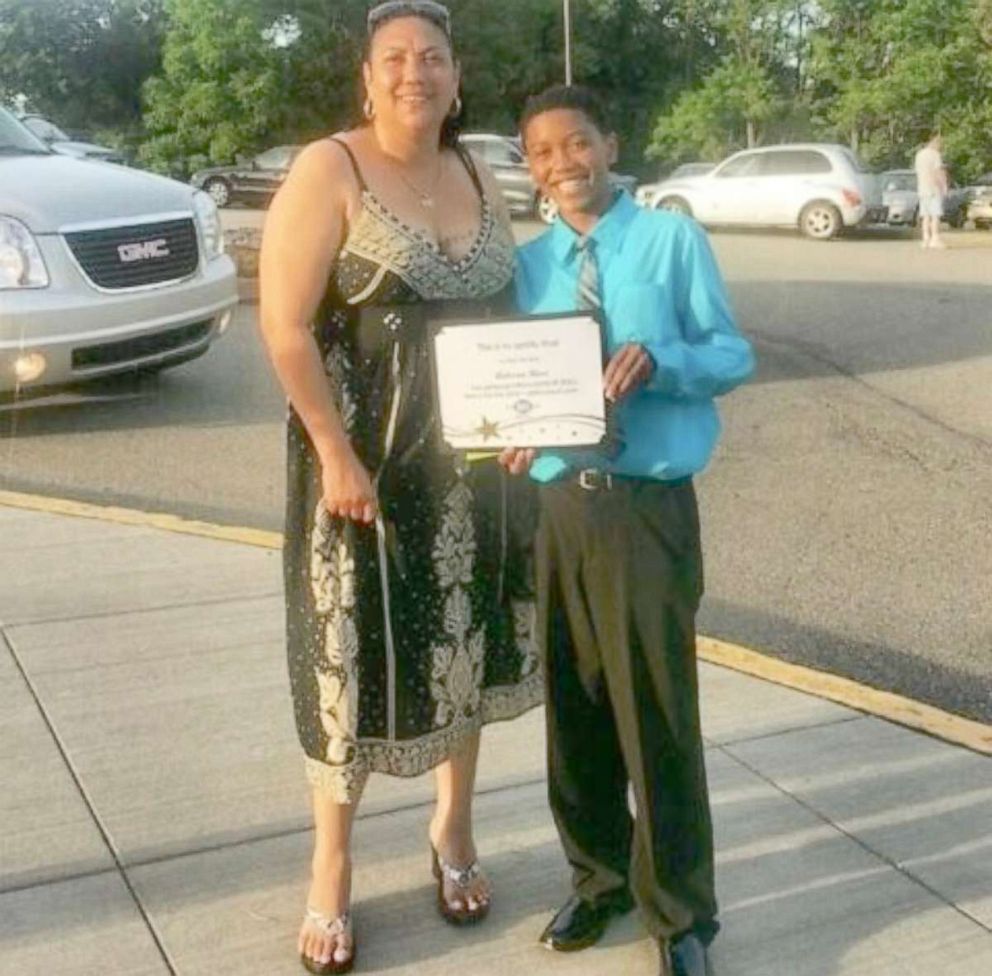 Rosfeld, who is on administrative leave while the shooting is under investigation, said he has been staying away from the news coverage of the shooting and would not discuss details of what prompted him to use deadly force. He said he was unaware that there is a video of the shooting.

He said he began his career in law enforcement in 2011 and that prior to joining the East Pittsburg Police Department he worked as an officer for the University of Pittsburgh and at two other police departments in Allegheny County, Pennsylvania.

Kenney told ABC News that she had drilled it in her son to always respect the police.

"My son is dead and I keep saying that, but he didn't die by accident," she said. "He didn't fall off a cliff. He didn't trip and bump his head. A cop killed him. The same person that should have protected him, the same person who I taught my son to respect and always have the most respect for, never be disrespectful, murdered my son." 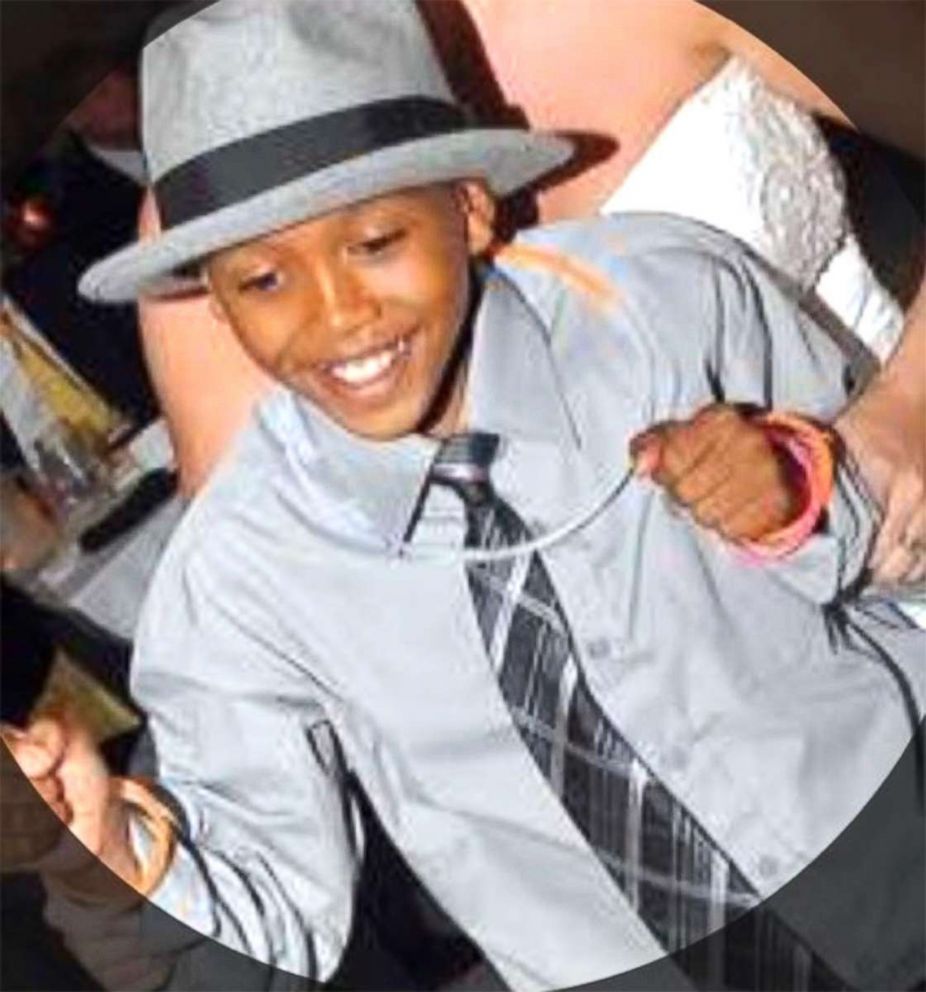 "To see how handsome my son was; he didn't deserve that. No one deserves that. And no one deserves to have to bury their baby at 17 years old for trying to make it home, while his momma's waiting on the porch for him to get back. I wouldn't wish this on anybody. I mean, I can't begin to explain the sadness and sorrow."

She said she is amazed at the thousands of people who have taken to the streets to demand justice for her son, including the many friends, teachers, and neighbors who knew Antwon's character.

"I look at it this way: If it wasn't Antwon and it was another child, I don't know how many people would have stood up. But because my son was truly a beautiful soul, everyone stood up and I'm hoping that it changes the world," Kenney said.

In a poem her son composed on May 16, 2016, for an English literature class, he wrote, "I am confused and afraid. I wonder what path I'll take. I hear that there's only two ways out. I see mothers bury their sons. I want my mom to never feel that pain."

Listening to those words, she said, they were all too familiar.

"They're actually words from his mother," Kenney said. "That's how I know that my son heard me. And that right there makes me smile because we were so close and I was so involved with what was going on with him and those words he interpreted from me. 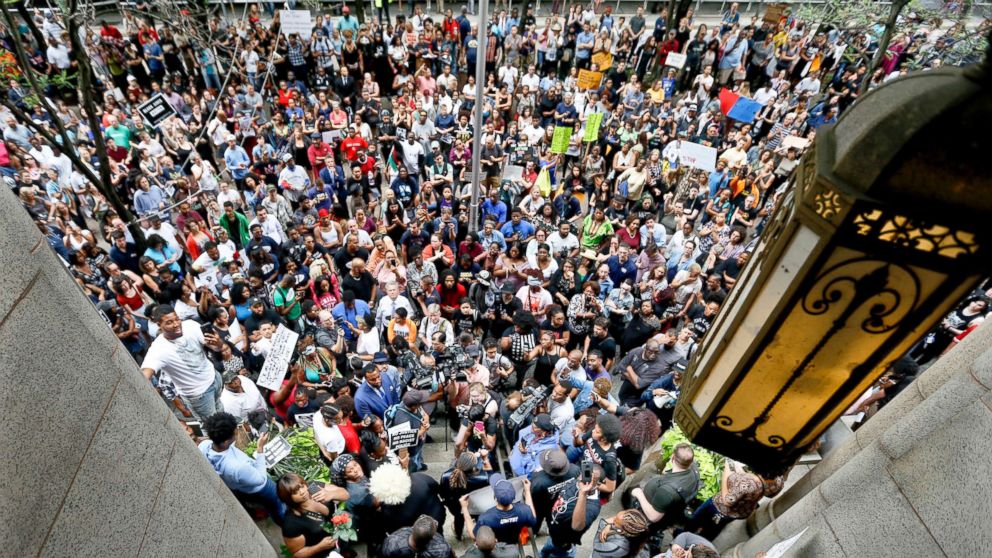 Keith Srakocic/AP
Protesters swarm the front of the Allegheny County Courthouse as they rally, June 21, 2018 in Pittsburgh for the killing of Antwon Rose Jr. who was fatally shot by a police officer.

A funeral will be held for Antwon at 11 a.m. Monday at the Woodland Hills Intermediate School in Homestead, Pennsylvania, where he was a former student. Many mourners plan to wear purple in Antwon's honor. 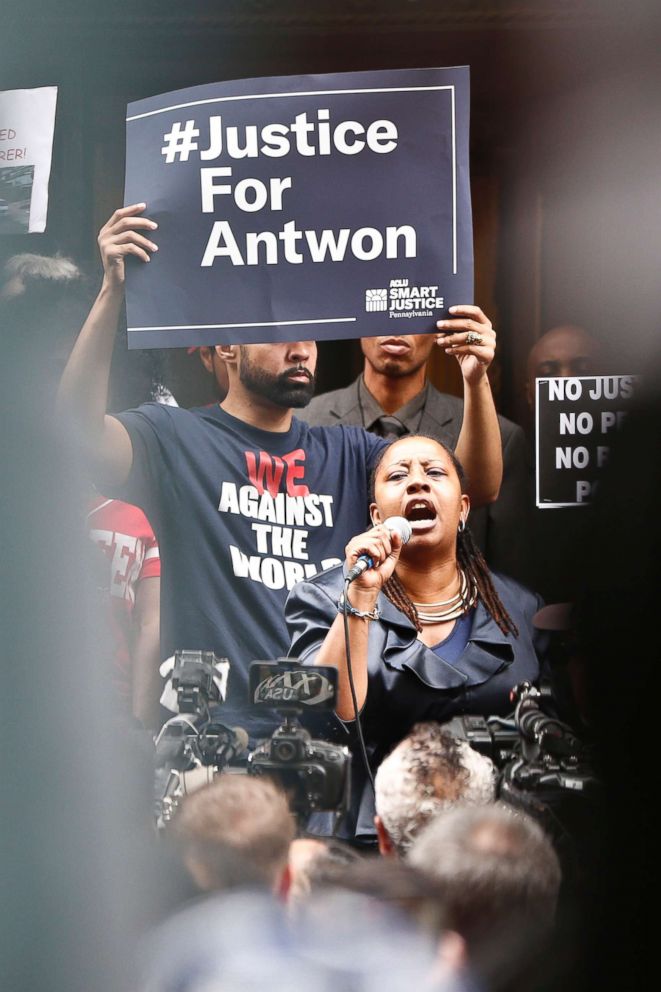 Keith Srakocic/AP
Protesters listen to one of the speakers as they rally in front of the Allegheny County Courthouse, June 21, 2018, in Pittsburgh for the killing of Antwon Rose Jr. who was fatally shot by a police officer.

Kenney and the senior Antwon Rose said they hope their son is not forgotten after he is buried.