In December 2021 Thomas was found unresponsive in his shower, but now the mysterious circumstances of his death have come to light.

After donating their son's brain to research, his parents told ABC News in an exclusive interview they've learned Thomas' suffered from Stage 2 CTE and his death was caused by a separate seizure disorder that led to cardiac arrest.

"Cardiac arrest, you know, is the way that they're trying to say -- what kinda happened to him," Bobby Thomas said, adding that his son "suffocated -- he died." 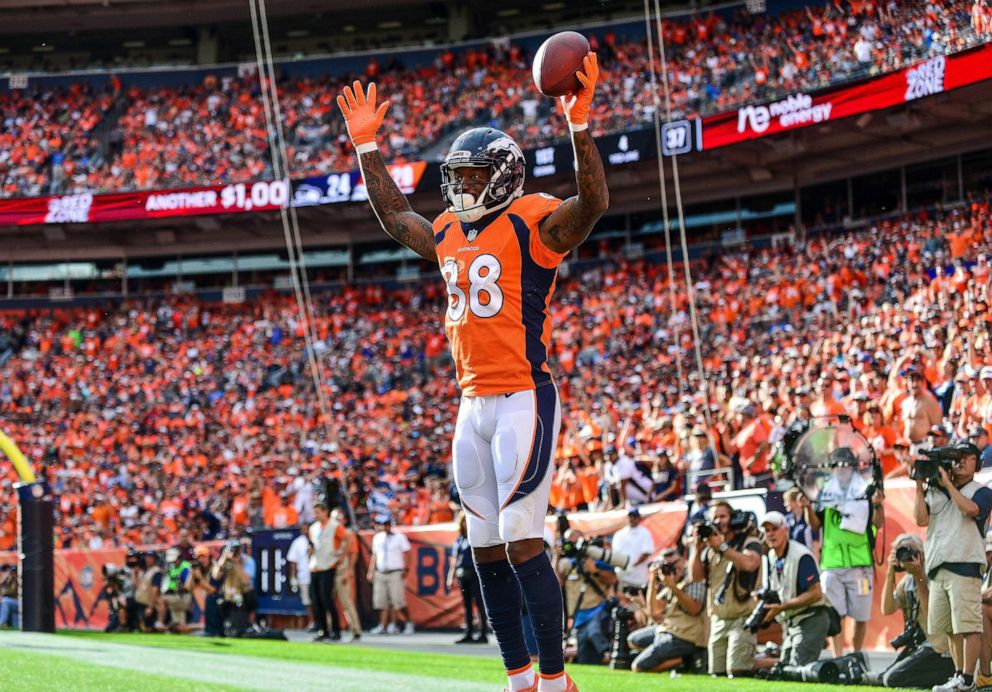 Dustin Bradford/Getty Images, FILE
Wide receiver Demaryius Thomas #88 of the Denver Broncos celebrates after making a catch on the edge of the end zone against the Seattle Seahawks at Broncos Stadium at Mile High in Denver, Sept. 9, 2018.

The first cases of chronic traumatic encephalopathy, a degenerative brain disease known as CTE, were found in the brains of former NFL players nearly two decades ago. At Boston University's CTE Center, Dr. Ann McKee said she has diagnosed it in six to seven hundred athletes after death, from amateurs to professionals, in just about any sport associated with hits to the head.

"We found what we've seen in so many other players under the age of 34," the director of Neuropathology Core at Boston University, said of what they saw in Thomas' brain. "On the basis of multiple lesions in the frontal lobes and temporal lobe are beginning degeneration of deeper areas of the brain. He was diagnosed with CTE. Stage two."

McKee continued, "CTE itself does not cause death. You don't die from CTE. What CTE does is it changes your behavior and your personality."

Thomas' parents said they saw him struggle in the year leading up to his eventual death. They knew his 10 seasons in the league riddled his body with physical injuries, but he was suddenly experiencing a deeper pain they couldn't explain. 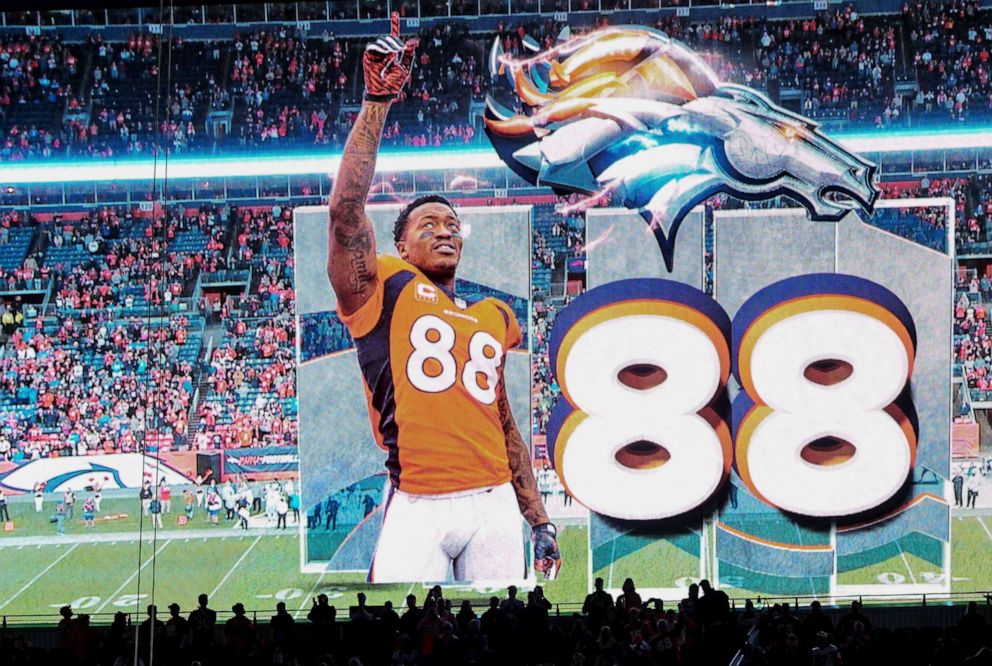 Denver Post via Getty Images, FILE
Demaryius Thomas is remembered by Denver Broncos fans as his number 88 is flashed on the scoreboard at Empower Field at Mile High in Denver, Dec. 12, 2021.

"He was paranoid, like, all the time. But memory loss, I saw that, as well," Bobby Thomas recalled. "Every single day, he complained about -- about having a headache."

"His mood would change, and he would also isolate himself sometimes," his mom, Katina Stuckey Smith, added. "[Demaryius] would tell me, he was like, 'Mom, I don't know what's goin' on with my body -- I gotta get myself together.' And he said, 'I don't feel like myself anymore.'"

Bobby Thomas explained that his son "was seeking medical help" but wasn't sure if it was working. "From my understanding right now, what I've learned, it wasn't helpin' him," he said.

"When they started explaining -- side effects, warning signs and that's when the bell started ringing. When they said it, I was like, 'Man, he was doing that. He did that, too,'" his father said. "And I faulted myself, 'cause I said, 'I know I coulda done more.'"

Dr. McKee explained that "a lot of families have tremendous guilt" after this kind of posthumous diagnosis.

"But the truth is, we don't have any specific treatment for CTE at this time -- these guys suffer in silence and they have a lot of trouble finding anyone in the medical professional field who actually knows what's going on," McKee said. "It's an invisible injury." 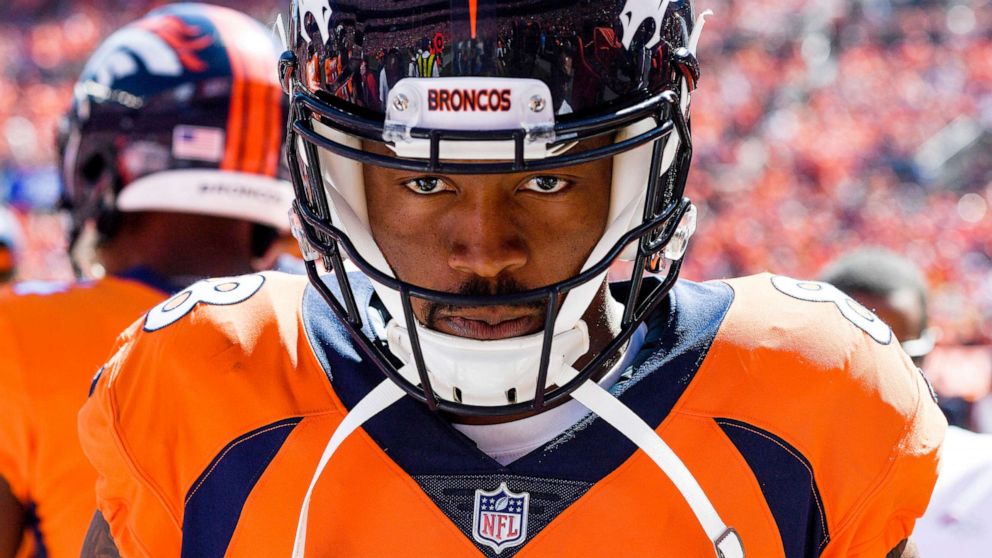 Denver Post via Getty Images, FILE
Demaryius Thomas of the Denver Broncos stands on the sidelines during the first quarter against the Seattle Seahawks in Denver, Sept. 9, 2018.

In 2021, Demaryius Thomas also started experiencing violent seizures, which Dr. McKee said she believes were due to severe traumatic injuries off the football field, including a car wreck and falling down stone stairs.

"He would shake so much, like, he couldn't breathe," his father recalled. "You could hear him say, 'tch-tch-tch-tch,' like the wind trying to come out ...They got to the point where he was having three or four back to back ... if it wasn't for those seizures, he woulda went back playing football."

After 10 years in the NFL, primarily with the Denver Broncos, Thomas hung up his cleats and announced his retirement in July 2021.

His dad said that Demaryius attempted to find himself and "was really trying to find out what was goin' on with himself without them knowing what he was going through."

His mother added, "He didn't want people to know, you know, what was going on."

Less than six months later, after having another seizure, Thomas died.

"At first," Stuckey Smith said about donating her son's brain to research, "I didn't wanna do it. I was against it. And then I remember a conversation DT and I had where he said that, you know, 'Mom -- if anything ever happens to me, I wanna be able to help other players.'"

In response to the growing number of CTE cases found, the NFL has developed intensive protocols for players who have or show signs of a head injury. The league has invested hundreds of millions of dollars in helmet and concussion research.

Dr. McKee told ABC News she believes it's possible that within five years they'll be able to diagnose CTE in living players, which would change the entire landscape of how this disease is addressed.