Prince William started his three-day tour of the Holy Land with a visit to Yad Vashem, Israel's official memorial to the victims of the Holocaust.

The Jerusalem memorial also remembers the prince’s great-grandmother, Princess Alice, who is honored as part of the Righteous Among the Nations for her role in rescuing Jews during the Holocaust.

William participated in a memorial ceremony in the Hall of Remembrance and visited the Children’s Memorial, as well as signing the Yad Vashem Guest Book, where he wrote, "We must never forget the Holocaust." 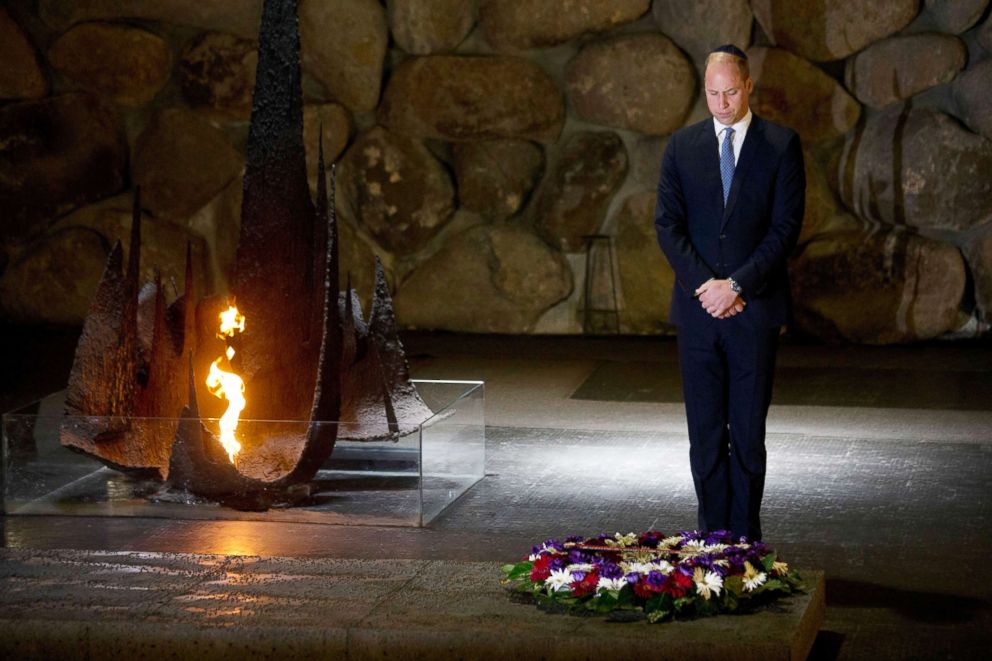 During the course of his visit, William met with two Holocaust survivors, Paul Alexander and Henry Foner, who both managed to escape Nazi Germany for the safety of Britain as part of the Kindertransport rescue effort. 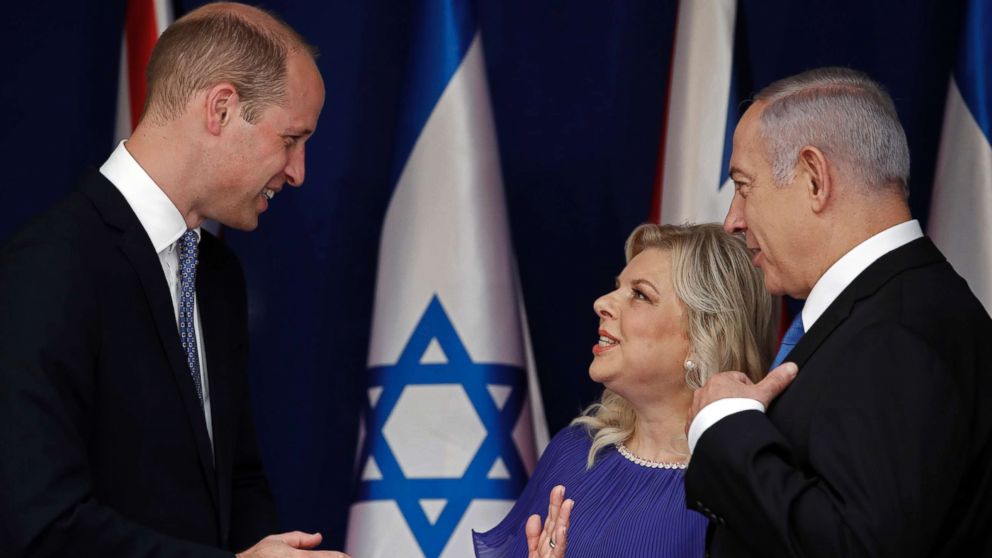 William also voiced his horror at the sight of shoes left behind by Jews killed in a Nazi extermination camp. "Terrifying. (I'm) trying to comprehend the scale," he said while viewing the display, according to Israeli newspaper Haaretz.

After the visit, William traveled to the residence of Israeli Prime Minister Benjamin Netanyahu and his wife.

Following the meeting with Netanyahu, the prince met with President Reuven Rivlin, who asked William to deliver a message of peace to Palestinian President Mahmoud Abbas.

"I would like you, and I know that you're going to meet President (Mahmoud) Abbas, I would like you to send him a message of peace and tell him it is about time, it is about time that we have to find together the way to build confidence, to build confidence as a first step to bring to understanding that we have to bring to an end the tragedy between us that goes along for more than 120 years," Rivlin told William. 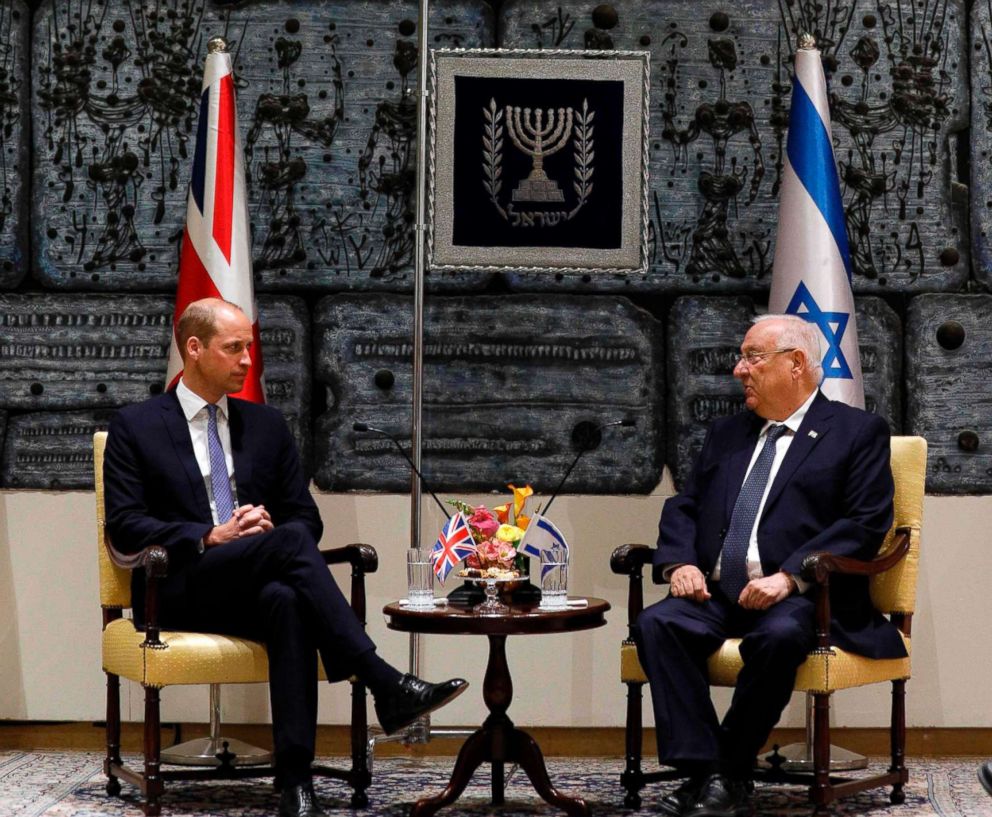 Then it was off to Jaffa, where William will attend a mixed Israeli-Palestinian youth soccer game and meet the young people involved in co-existence between different religious and ethnic communities.

Wednesday will be another important day for William: a visit to the West Bank, a territory that is occupied by Israel. He will travel to Ramallah and meet with Palestinian President Mahmoud Abbas and attend events focusing on the issues facing refugee communities. 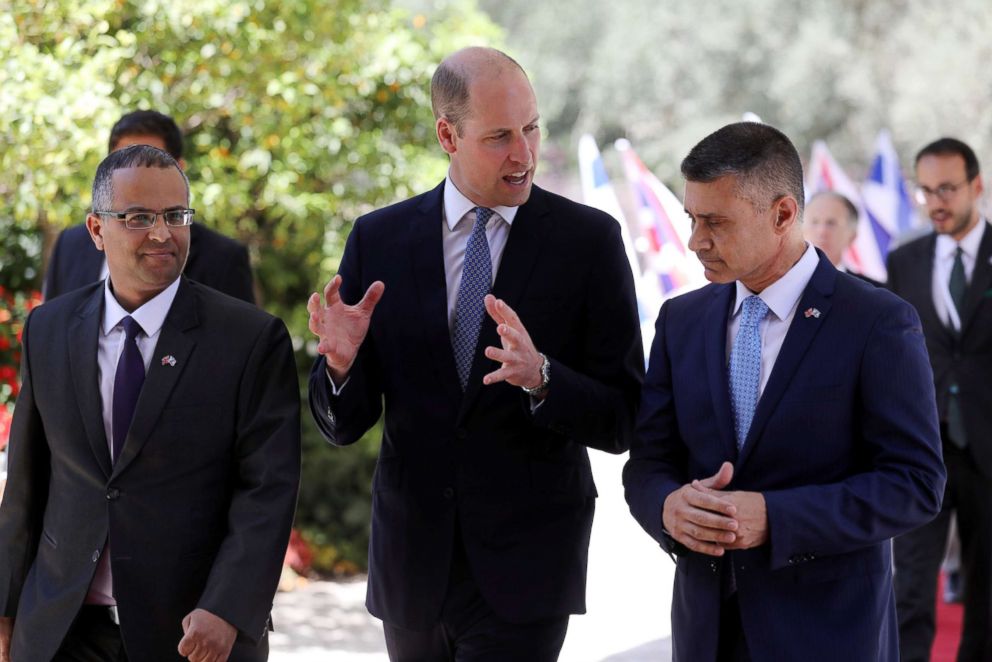 Ammar Awad/Reuters
Britain's Prince William speaks with officials as he arrives to the residence of Israeli President Reuven Rivlin in Jerusalem, June 26, 2018.