A few days after learning about the deadly shooting at an elementary school in Uvalde, Texas, Jim Witt, superintendent of Lake Local Schools in northern Ohio, reached out to a school safety organization he's worked with for over a decade.

"It's unfortunate," Witt said, but "every time we have a Uvalde situation," he emails the Educator's School Safety Network to ask what they need to know and what needs to be changed.

"We want to do everything we can to stay current with what is going on in school safety," he said.

As more has come to light on one of the worst school shootings in U.S history -- most notably the shortcomings of the law enforcement response -- schools across the country are reexamining their active shooter plans and implementing new measures, from requiring clear backpacks to more controversial steps like arming teachers.

While active shooters in schools remain exceedingly rare, they are on the increase in recent years, federal data shows, and they have an outsized impact on perceptions of safety. 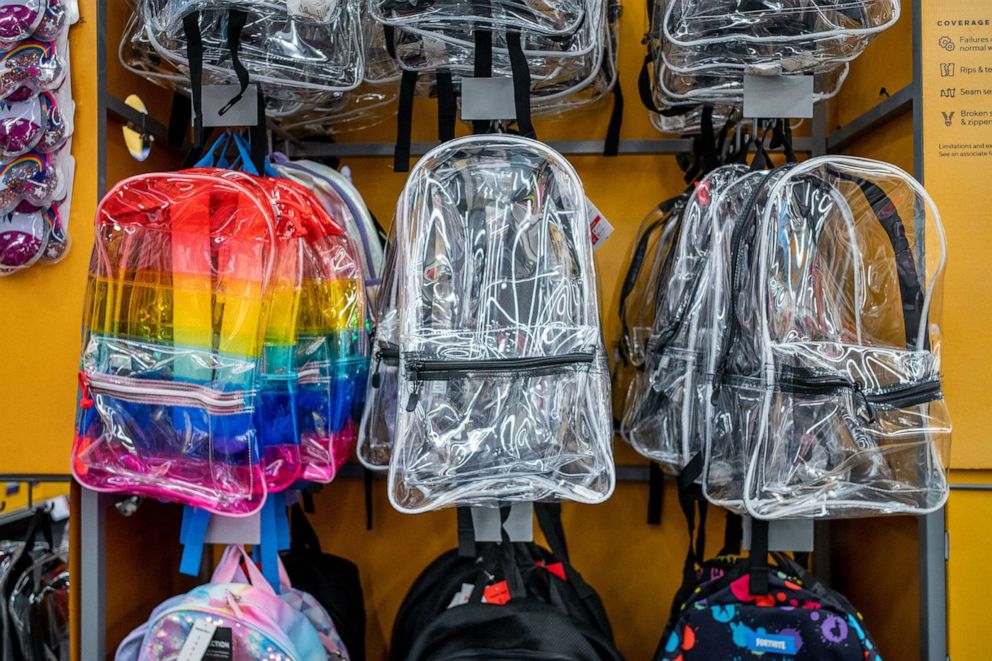 For Witt, the incident at Uvalde -- where the gunman entered the school through a door that didn't latch properly -- reinforced what his district already does, including having a planned entrance, maintaining a relationship with local police, checking in with students and the "vigilance of locking doors."

"When our school bells ring, our custodians -- you can set your watch by it -- they go and make sure that all of the exit doors are locked," said Witt. "My administrative staff and I walk around campus every day and included in our walks is checking those doors to make sure that they are locked and they are closed and they're latched."

A Texas state legislature investigation into the Uvalde shooting found that while the elementary school had adopted security policies to ensure that exterior doors and internal classroom doors were locked during school hours, those protocols were mostly ignored.

The shooting in Uvalde -- in which the 18-year-old alleged gunman killed 19 students and two teachers -- and other recent school shootings also demonstrate the importance of measures to reduce student access to guns, including conversations on proper gun storage and "red flag laws," Rob Wilcox, federal legal director for the gun violence prevention organization Everytown for Gun Safety, told ABC News.

"To keep our schools safe and to keep our students safe, no matter where they are in the community, schools and community members really need to work together," Wilcox said.

Months before the massacre at Robb Elementary School, Kristine Martin, the assistant superintendent of Washington Local Schools in Toledo, Ohio, was spearheading a school safety audit to determine their vulnerabilities.

"I think any time something like that happens, we always reflect on what are we doing and what are our practices and what can we do better or differently," she said. "We started this work before that, but it just speaks to the urgency of the work."

One of the areas the school focused on based on the audit was consistency. When students return in the fall, the district's 10 buildings will have new kiosks -- paid for through a state education grant -- to sign in visitors and dispense a standard visitor pass across the campus. Every school employee will also be required to wear their staff IDs, which previously wasn't a uniform practice across buildings.

"Kids in an emergency need to know who is a safe person," Martin said.

Though schools may turn their focus to active shooter drills, Amy Klinger, founder of the Educator's School Safety Network, which provides schools with safety training and resources, advises that they take an "all-hazards approach" that takes into account other scenarios that may be more likely to happen, such as violent fights that do not involve firearms, issues with noncustodial parents and severe weather.

"What I would hope for schools is that they really begin to look at kind of an all-hazards approach that says, what are we doing about access control? Does our communication plan work? Can people really get notifications? And that we look beyond just, we did a lockdown drill where everybody hid in the corner and now we're all safe," she continued. "Because Ulvade demonstrated that that's not the case."

The Texas state legislature investigation into the Uvalde shooting found a range of communication failures, from the lack of a command post being established by responding law enforcement to problematic radio reception inside the school building. It also found that Uvalde school district employees did not always reliably receive alerts like an active shooter situation for reasons including poor wi-fi coverage and turned-off phones. 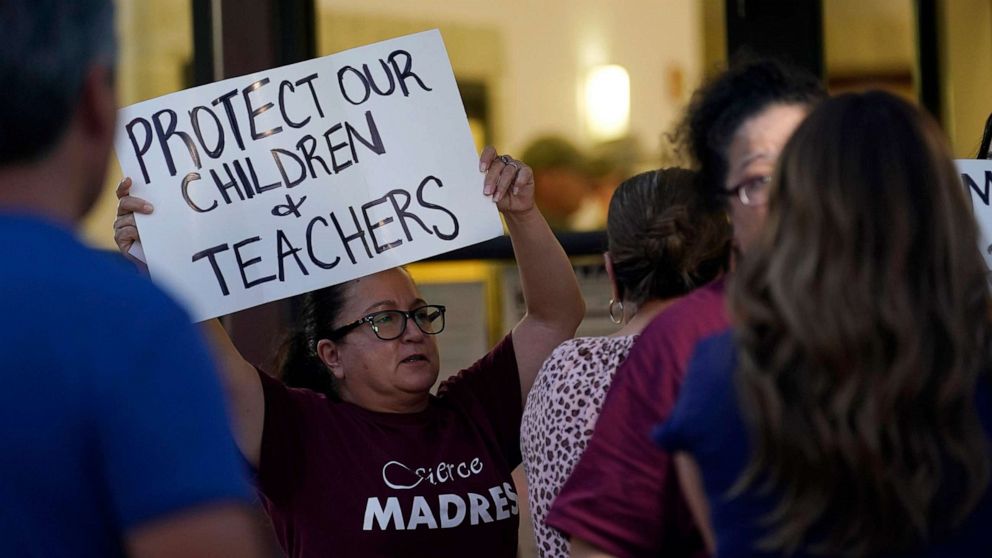 Eric Gay/AP
Parents and family of students hold protest signs during a special meeting of the Board of Trustees of Uvalde Consolidated Independent School District where parents addressed the shootings at Robb Elementary School, July 18, 2022, in Uvalde, Texas.

In the wake of the Uvalde shooting, the Texas Education Agency plans to review external entry points of every school in Texas, as well as review each district's safety protocols, the Texas Tribune reported. ABC News has reached out to the agency for an update on its reviews.

Among the recommendations in an interim report by the Arkansas School Safety Commission drafted in response to the mass shooting in Uvalde were that all exterior school building doors and classroom doors should remain closed and locked during school hours, and that school districts should develop a "layered two-way communication access between staff to ensure information sharing during critical incidents," such as the use of intercoms, radios and cell phones.

The accused gunman in the Uvalde shooting legally purchased the assault rifle used in the shooting when he turned 18, authorities said. That has led Uvalde community leaders to call on the state to hold a special legislative session to consider raising the minimum age to purchase semi-automatic assault-style rifles from 18 to 21.

Nearly 80% of school shooters under the age of 18 acquire guns from the home of family or close friends, according to Everytown -- which makes secure storage a key part of preventing gun violence in schools, Wilcox said.

"We've seen really encouraging action across the country as schools step up to make sure that everyone in their community knows how important it is to securely store firearms in the home," Wilcox said.

Last month, the Albuquerque Public Schools Board of Education voted to amend its student/parent handbook to include information about the secure storage of firearms. The move came nearly a year after one of the students in the district, 13-year-old Bennie Hargrove, was fatally shot during lunch at school. The accused shooter -- a fellow student -- allegedly brought his father's unsecured gun to school.

Much of this work happens at the school board level, Wilcox said. Though last month, the California governor signed a bill that requires schools to include information related to the safe storage of firearms in an annual notice sent to parents or guardians. The bill was drafted in reaction to a 2021 school shooting at a Michigan high school, in which an alleged 15-year-old gunman fatally shot four of his classmates. 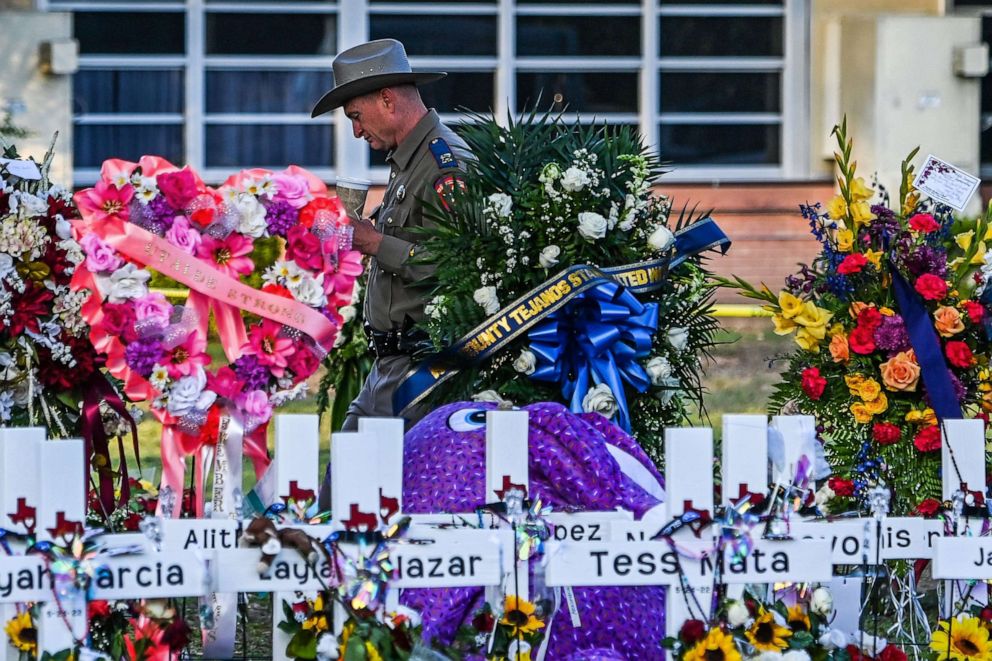 Chandan Khanna/AFP via Getty Images, FILE
A police officer stands near the makeshift memorial outside Robb Elementary School in Uvalde, Texas, May 28, 2022.

Another tool that schools could use to limit students' access to guns is extreme risk protection orders, often known as "red flag laws," Wilcox said.

The Texas House of Representatives committee report on the Robb Elementary School shooting revealed the accused school shooter exhibited many warning signs prior to the massacre.

"If a student is showing that they're in crisis and you're taking steps to intervene, then you may want to use an extreme risk protection order to ensure that there's no access to guns by that young person," Wilcox said.

Wilcox pointed to testimony by a Baltimore sheriff who told state legislators in 2019 that in the first few months of Maryland's red flag law going into effect, his office seized firearms in five instances that involved schools.

For Witt, part of maintaining a safe school includes having meaningful relationships with students.

"If a student has a broken leg, you know it because he or she is on crutches and there's a cast on the leg. If a student is suffering from depression or some other type of mental health illness, you can't see it," he said. "That's why the relationship becomes even more imperative, so those kids not only have an outlet to talk to someone about their situation, but also if there's a possibility of danger, you can address it in a meaningful and helpful way."

Mental health support is a focus; the Arkansas School Safety Commission advised in its interim report that all students should have access to mental health services, and that all school districts should provide youth mental health first aid training to all staff that interacts with students.

For Wilcox, having a positive school climate is one part of preventing school violence, so that someone in crisis can get help and prevent harming themselves or others.

"But at the same time," he said, "we need everyone in the community to make sure that there's no easy access to guns for young people."